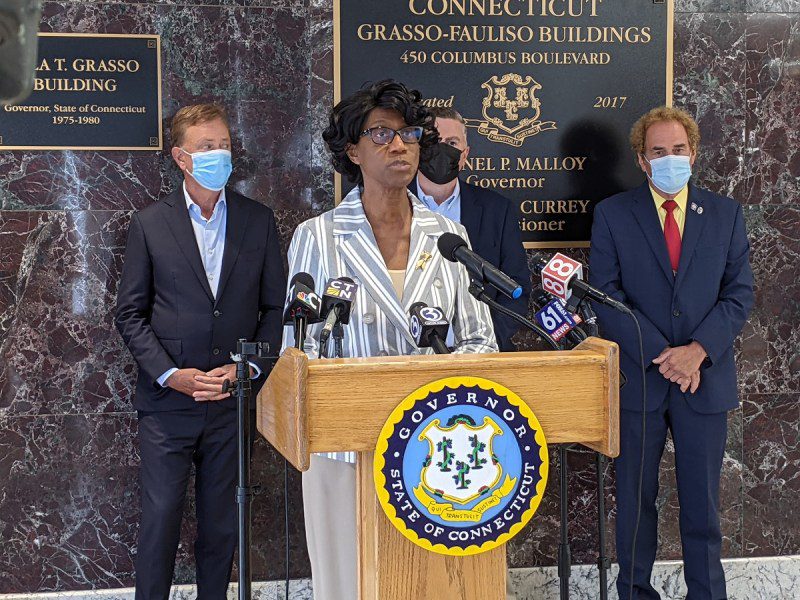 Charlene Russell-Tucker was appointed acting commissioner of Connecticut’s Education Department in March, when Miguel Cardona was tapped by President Joe Biden to become Secretary of Education.

Charlene Russell-Tucker, a career Education Department employee who stepped temporarily into the commissioner’s role this year, got a nod Thursday from the governor and the state Board of Education to head the agency on a permanent basis.

Russell-Tucker has worked within the department for more than 20 years and moved from deputy commissioner to acting commissioner in March after President Joe Biden tapped former Commissioner Miguel Cardona to serve as Secretary of Education for the U.S. Lamont nominated Russell-Tucker as his choice to replace Cardona following a unanimous vote by the state education board that morning.

The governor announced the decision in the lobby of an office building containing the department’s headquarters during a ceremonial bill signing.

“Charlene was sworn in just half an hour ago,” Lamont said. “Could not be more proud.”

In a press release, Lt. Gov. Susan Bysiewicz praised Russell-Tucker’s leadership of the department since March.

“For the past five months, she has admirably stepped up to fill Secretary Cardona’s shoes and has played a critical role in getting Connecticut’s children back to school safely,” Bysiewicz said.

Russell-Tucker told reporters much of the work has been done in coordination with the state Public Health Department as the ongoing coronavirus pandemic has complicated efforts to safely educate Connecticut’s students.

“We’re truly joined at the hip with the Department of Public Health,” Russell-Tucker said. “We meet almost daily – sometimes more than once a day to work together … We’ve jointly published guidance documents for our districts so that they know what to do around mitigation strategies, what to do about ventilation, what to do about hand hygiene, distancing, cohorting. We’ve all been working together.”

On Tuesday, Lamont announced he would once again require masks in Connecticut classrooms as school districts around the state prepare to welcome students for in-person learning over the next few weeks.

Asked Thursday whether the state would compel some school districts to continue to offer remote learning for immunocompromised students and families, the governor said he had no immediate plans to issue any such order. Lamont said many online learning platforms were still in place, but the state’s priority now was ensuring the safe opening of in-person learning.

“I think we learned last year there’s no substitute for in-person education,” Lamont said. “We’ve made every effort possible to make it easier for people to learn remotely especially during the worst days of the pandemic … but right now we’re doing everything we can to convince parents that their kids can go to our schools safely.”

Russell-Tucker’s nomination will go before the legislature for approval.