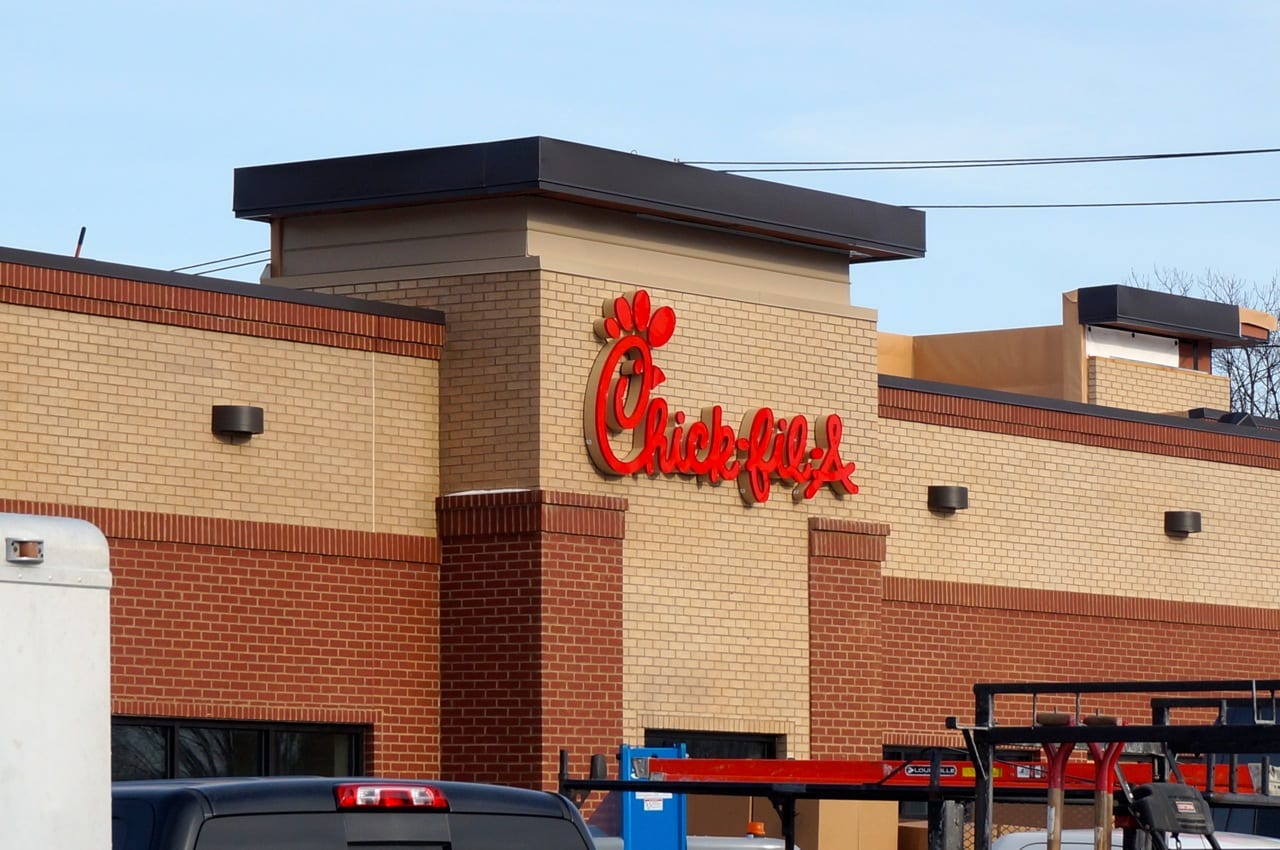 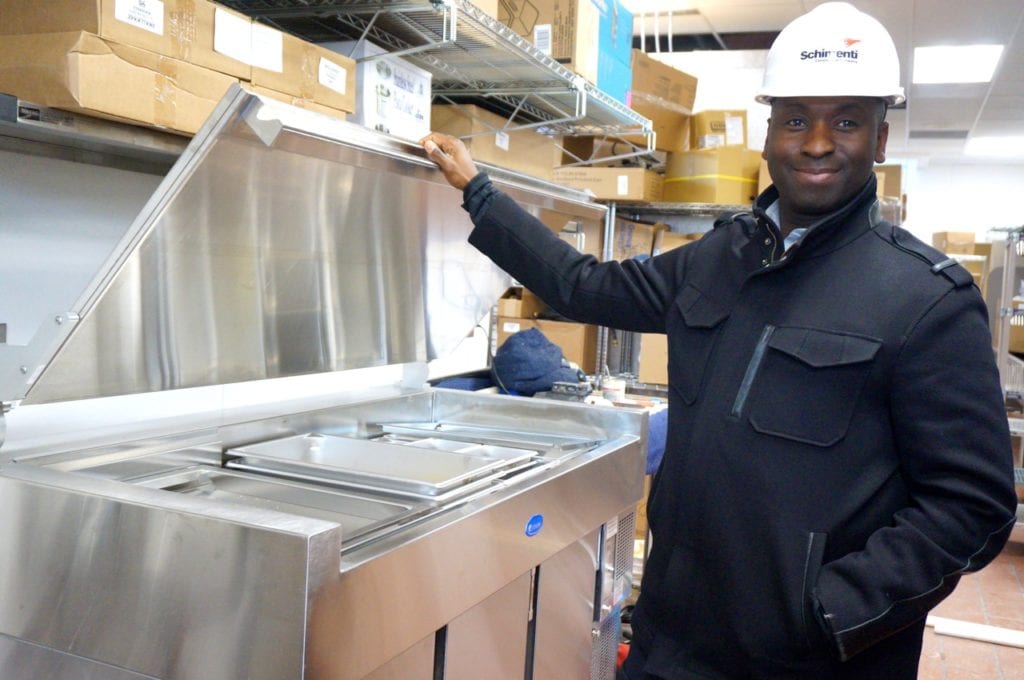 Daryl Jackson, owner/operator of the West Hartford Chick-fil-A, shows off the breading table – the heart of the kitchen. Photo credit: Ronni Newton

Chick-fil-A Owner/Operator Daryl Jackson said that his West Hartford restaurant has gotten the green light, and the 509 New Park Ave. location will open to the public on Feb. 9, 2017. 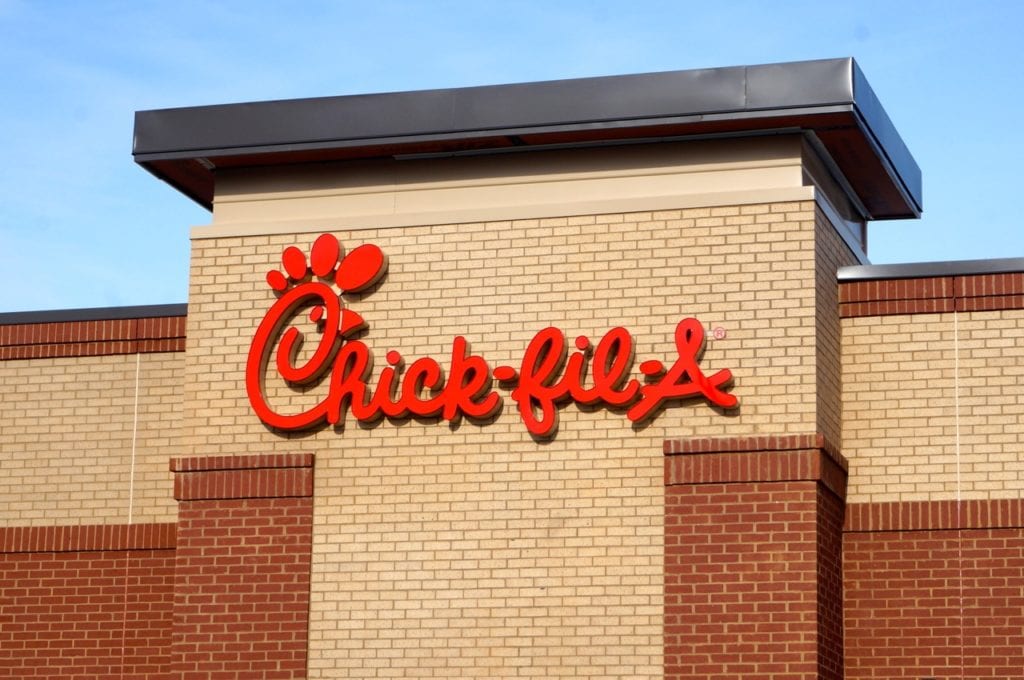 Plans to open in West Hartford were announced just over a year ago, and now signs are now hanging on the outside of the building, gleaming stainless steel equipment is in the process of being installed in the kitchen, benches and tables are waiting to be unpacked, and the drive-thru order board has been delivered and will be hooked up.

The West Hartford Town Council approved the application for Chick-fil-A in May 2016, and construction started during the summer. As Jackson gives a tour of the space, he is visibly proud and very excited about the opening.

Jackson is new to restaurant/retail management, but is no stranger to the area. He was born and raised in Naugatuck and earned a B.S. in finance from Central Connecticut State University. After earning an MBA at Purdue, he returned to Connecticut and spent nearly a decade working in manufacturing finance at United Technologies and then nearly eight years at Stanley Black & Decker.

He’s lived in the south for the past several years, working as CFO for Berkshire Hathaway’s Marmon Group first in Virginia and then in Alabama. 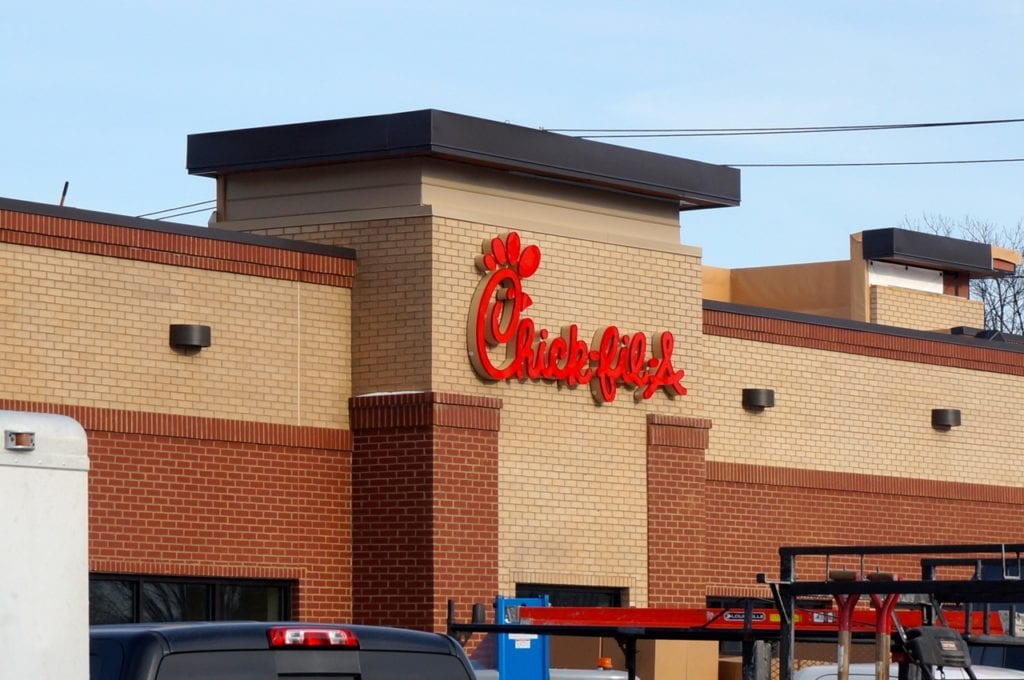 What made Jackson apply to become a Chick-fil-A owner/operator was the positive experience of his former Stanley Black & Decker colleague Todd Langston, the owner/operator of the Wallingford Chick-fil-A. When he spoke with Langston, “It sounded like he had found his calling,” Jackson said.

Jackson decided to apply in December 2015, right after his move to Alabama and while he was in the process of relocating his family. Between 20,000 and 30,000 people apply for the opportunity to become a franchise owner every year, and Jackson knew it could take two or more years to get through the vigorous vetting process. His approval was much faster.

Jackson knew he wanted to be back in the northeast and when he found out the company planned to open in West Hartford he thought the location would be perfect. On Oct. 31, 2016, he said he was awarded the West Hartford franchise and in late November he and his family left the house in Alabama that they had bought just months earlier and moved to Connecticut.

Jackson and his wife – who is expecting the couple’s first baby in March – and the nephew they are raising are renting a house in West Hartford right now.

“I really like West Hartford. West Hartford is great,” Jackson said. He loves the Center, the town’s unique neighborhoods, and the up-and-coming New Park Avenue corridor where Chick-fil-A is located. 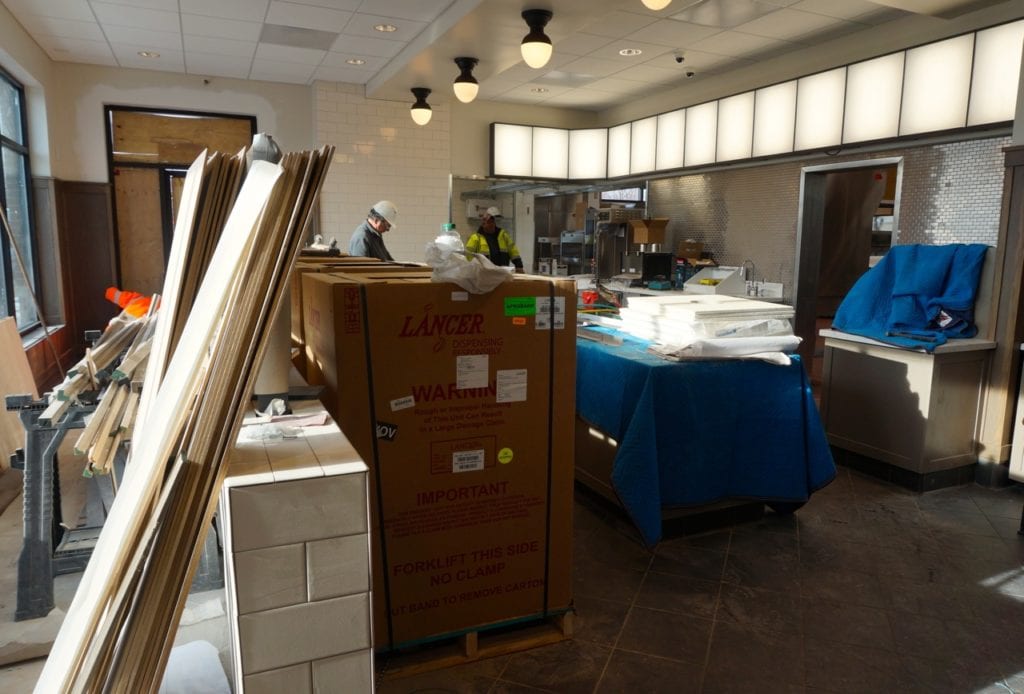 Finish work is being completed at the counter for the West Hartford Chick-fil-A. Photo credit: Ronni Newton

A marketing team from the corporate office will assist with the grand opening week, with special events including the signature “First 100” overnight campout the day before the Feb. 9 opening. The first 100 customers will receive a card good for a year’s worth of free Chick-fil-A. (Click here for more details.)

Jackson looks forward to meeting those who come to the First 100, and providing them with samples of menu offerings. “It will be a great opportunity to serve folks who are there for the event,” he said.

He will also host a grand opening team dinner for employees the week before the opening, a “first bite” ribbon cutting, and a premiere breakfast event. He said that many don’t realize Chick-fil-A serves a great selection of breakfast items including chicken biscuits, oatmeal, fruit cups, yogurt parfaits, and bacon, egg, and cheese biscuits.

Chick-fil-A will seat 126 in the restaurant, and will have capacity for approximately 15 on the patio. The West Hartford location will be open from 6:30 a.m.-10 p.m., Monday through Saturday.

West Hartford, like all of the other Chick-fil-A locations, will be closed on Sundays. Jackson said that founder S. Truett Cathy was working around the clock when he opened his first restaurant, the Dwarf Grill, in Georgia in 1946. “He needed a day to recharge and wanted that to apply to his employees,” Jackson said. Like Cathy, Jackson said he thinks the work-life balance is important and embraces the Sunday closing.

Jackson will be very involved in the day-to-day running of the restaurant, and is currently deep into the process of hiring a management team and anywhere from 80-100 employees for a mixture of full and part time positions. At last count he had already received more than 400 applications.”I’m hoping that’s a good indication of interest,” he said.

“I am hiring for character,” he said. “We will train for everything else.”

In the past Chick-fil-A has been criticized for statements made by CEO Dan Cathy, who professed support for “traditional marriage” but later admitted that he made a mistake.

Jackson is committed to being completely non-discriminatory.

“I don’t care if they are red, blue, what their beliefs are. I will hire anyone and we will serve everybody,” said Jackson. 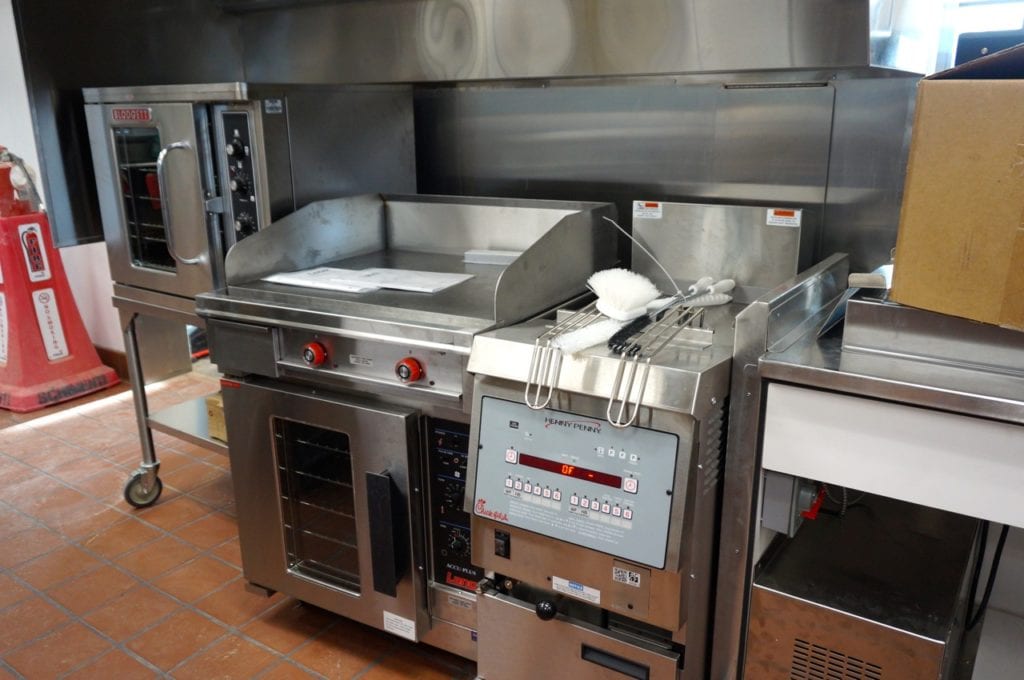 Fresh chocolate chunk cookies will be baked daily in this oven at Chick-fil-A in West Hartford. Photo credit: Ronni Newton

“We are in the restaurant business. I am focused on serving high-quality, delicious meals with excellent customer service. My job is to ensure that every customer who walks through the door has a remarkable experience,” said Jackson.

Most of the food is handmade, Jackson said, and people don’t realize that. “We’re squeezing the lemons for lemonade every day. We make the dough for the biscuits from scratch.”

The chicken is all hand-breaded, he said, showing off the breading table which is the “heart” of the kitchen. It’s near the oven where chocolate-chunk cookies will soon be baking.

With its distressed wood paneling and subway tile, the West Hartford location has a more contemporary feel than some of the other Connecticut Chick-fil-A restaurants, and Jackson is very pleased with the way it turned out.

Right near the counter will be an area of high-top tables made from reclaimed wood that have been made by those who have turned their lives around. Their stories are inscribed on the underside of the tables, Jackson said.

Chick-fil-A will have drive-thru service – something that is permitted only in industrial zones in West Hartford. “Speed of service is something we’re striving for,” Jackson said.

Service to the community is also a key focus of the brand, something Jackson said not everyone realizes. It’s also important to Jackson personally, and he has a particular interest in supporting youth-based organizations. “I plan on pouring myself into the community,” he said.

Jackson said he welcomes input. Eventually the best way to reach him will be email, but until the systems are all up and running the best method is to send a message through the restaurant’s Facebook page. Those who follow the location on Facebook will also be kept up-to-date on news and special offers.

For more information about Chick-fil-A, including history and menu offerings, visit the company’s website. 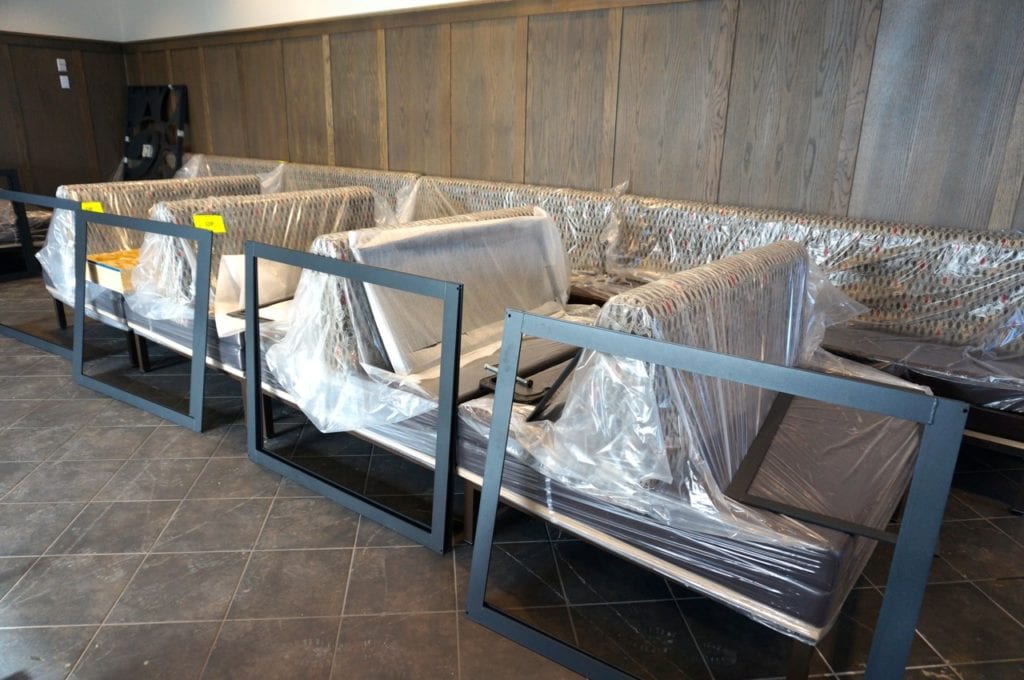 Seating is ready to be installed. The walls of the West Hartford Chick-fil-A are covered with distressed wood paneling. Photo credit: Ronni Newton 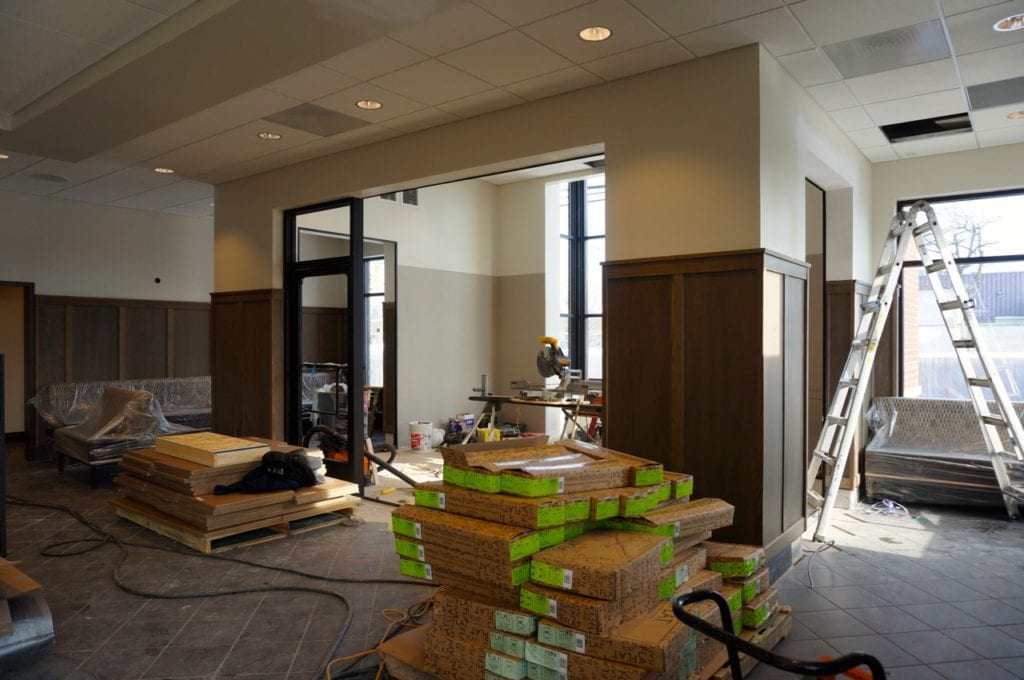 The front of the Chick-fil-A in West Hartford will include a play area. Photo credit: Ronni Newton 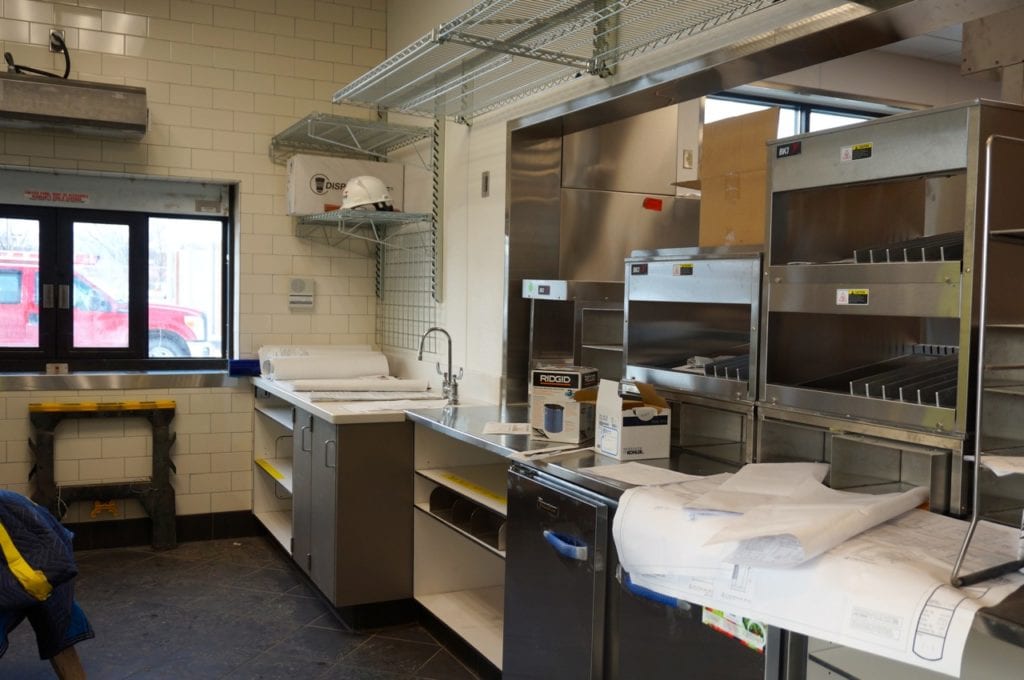 Speedy service will be the goal of the drive-thru – a featured only permitted in industrial zones of West Hartford. Photo credit: Ronni Newton 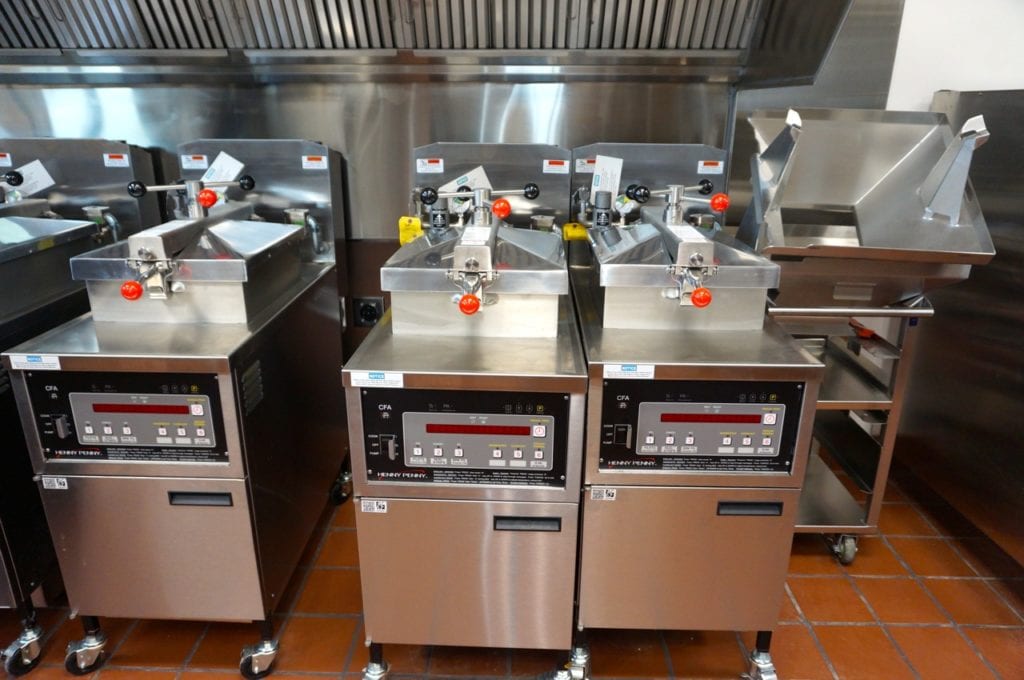 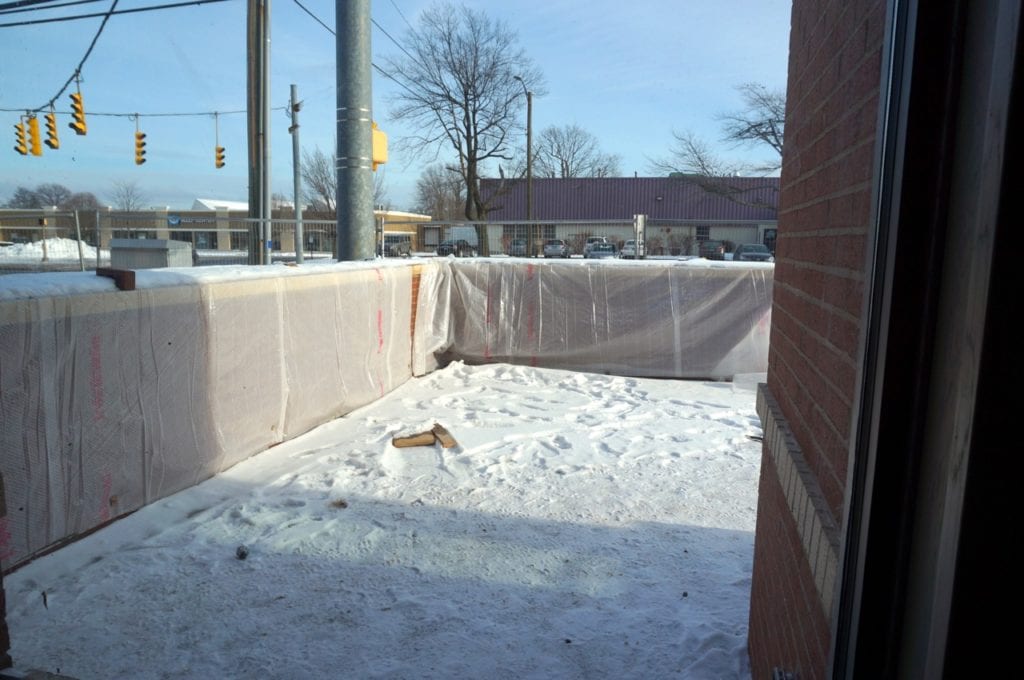 Approximately 15 seats will be available on the patio once the weather warms up. Photo credit: Ronni Newton 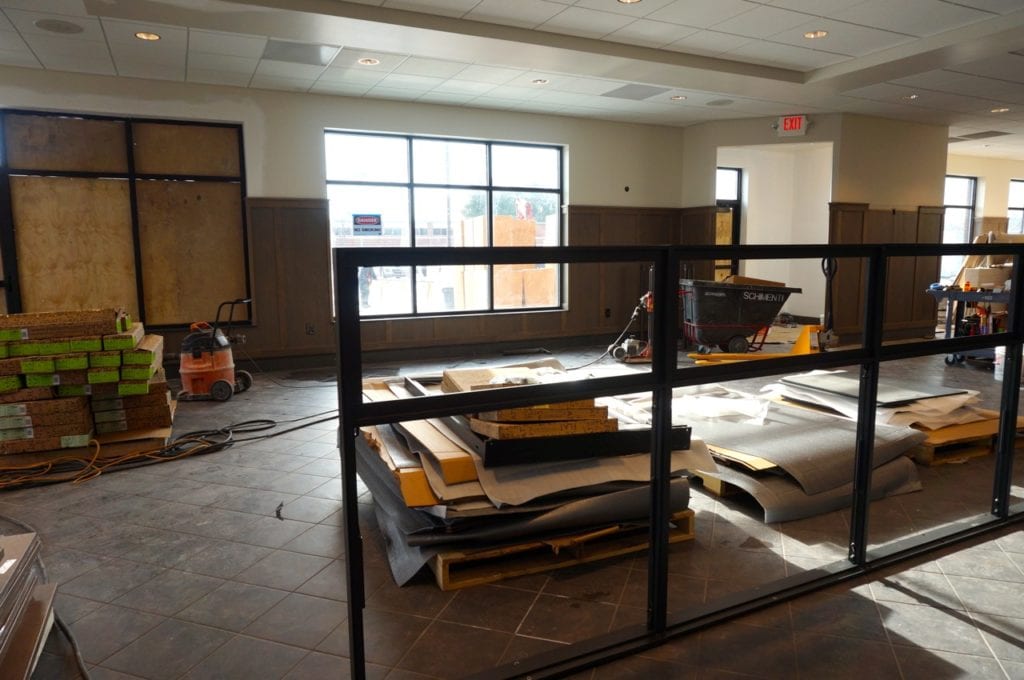 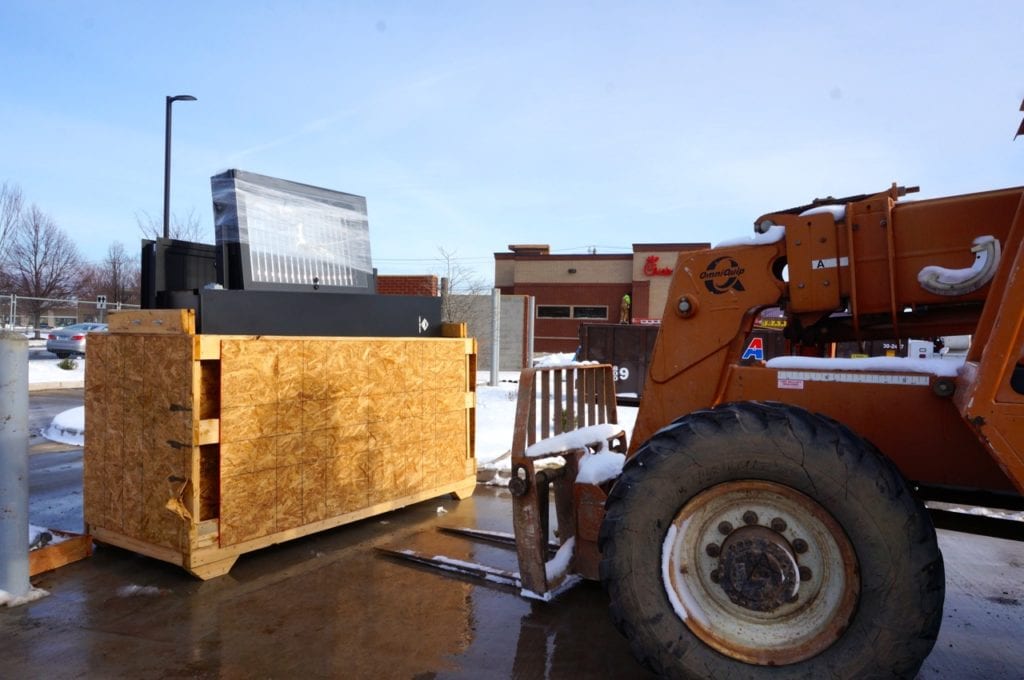 The order board will be installed for the Chick-fil-A West Hartford drive-thru. Photo credit: Ronni Newton 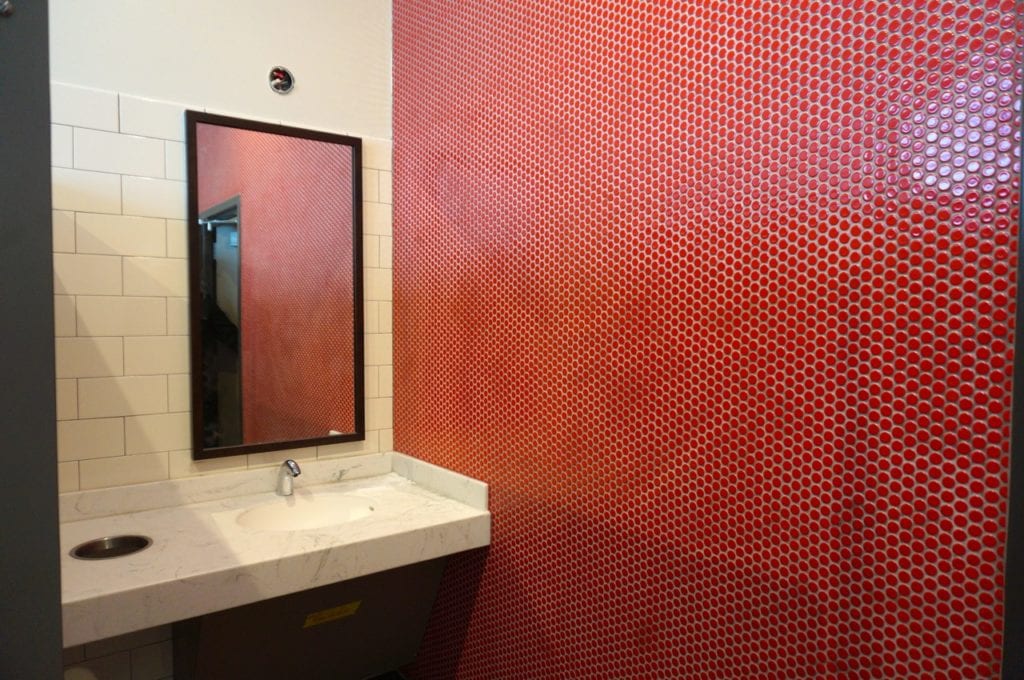 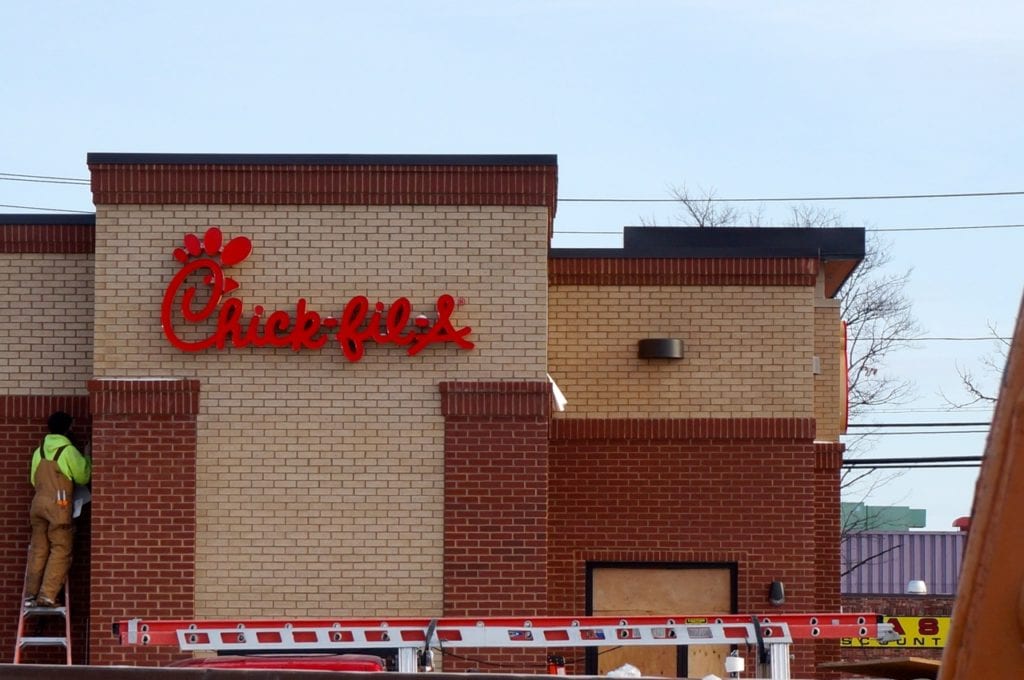 Chick-fil-A is nearly complete and will open in West Hartford on Feb. 9, 2017. Photo credit: Ronni Newton