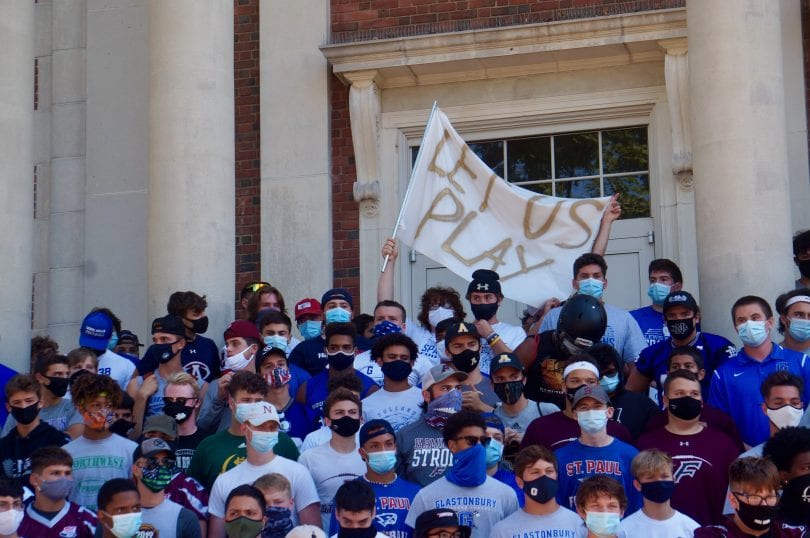 West Hartford’s athletic director said he is taking things ‘day by day,’ and will discuss next steps with the Conard and Hall high school coaches following the results of a meeting of the CIAC’s football committee later this week.

The Connecticut Interscholastic Athletic Conference announced Wednesday that, following a vote by its Board of Control, there will not be a full-contact football season this fall – reaffirming the decision it had previously made on Sept. 3 – but this time the CIAC said it will leave open the window for competition to be held later in the academic year.

As for what the next steps will be for football athletes at Conard and Hall, Siegal said he will wait and see what opportunities are proposed by the CIAC’s football committee, which is scheduled to meet this week. After that, Siegal said he plans to meet with the schools’ coaching staffs.

“This decision was made in alignment with the Connecticut Department of Health’s recommendation that football is a high-risk sport and should not be played this fall. The board did, however, agree it would consider allowing competition at a later time for a sport that cannot hold its regularly scheduled season, such as football, provided it does not negatively impact spring sports,” the CIAC said in a statement Wednesday afternoon.

After football players had been left in limbo throughout the summer, the initial announcement, released on Sept. 4, was met with disappointment as well as anger by some in the football community. In response, more than 150 players and several hundred parents, coaches, and supporters rallied in West Hartford on Sept. 6, followed by a crowd of more than 1,000 who attended a rally at the State Capitol on Sept. 9.

In addition, nearly 34,000 people signed a petition on Change.org, formally requesting that CIAC and Connecticut Department of Public Health reconsider and allow 11-on-11 full contact football this fall, while the COVID-19 metrics in Connecticut are among the best in the country.

There were calls for a meeting with the governor, and a request to get the DPH and CIAC together in the same room with the administration, to reconsider the decision based on additional mitigation strategies offered by the CIAC. The organization believed those strategies would result in classifying football as a moderate-risk rather than a high-risk sport as recommended by DPH. A lengthy meeting was held the morning of Sept. 11.

Dr. Deidre Gifford, acting commissioner of DPH, followed up with a letter to CIAC Executive Director Glenn Lungarini on Monday, Sept. 14, stating that while DPH agrees that many of the CIAC’s strategies “also align well with the generally accepted public health recommendations for reducing the spread of COVID-19,” there was not enough scientific evidence to support the CIAC’s suggestion to use “plastic shields that attach to the helmet or a cloth covering over the front grill portion of the helmet for football as further strategies designed to reduce the risk categorization for football.”

The CIAC’s football committee will meet Thursday and will recommend low- or moderate-risk activities in which football players can continue to engage, and may also recommend a season in early 2021.

“CIAC made every effort to weigh all factors in this decision, including the passionate voices of students, parents, and school personnel, and ultimately made the determination to align its decision with the recommendations of the Governor’s office and DPH to not hold high-risk sports at this time,” Lungarini said in a statement. “In conversation with other state associations across the country, it was clear that a key factor in playing interscholastic football was alignment with the opinion of their state’s governor and state health agency.”

In a press briefing Monday afternoon, Gov. Ned Lamont expressed his support for postponing football to the spring – which could actually mean holding a season in between winter and spring sports, perhaps beginning in February. “I think there could be world of difference where it could be safer,” Lamont said, noting the possibility of new therapies, inexpensive and widely available rapid tests, and being through additional risks caused by the flu season and the opening of colleges and universities.

Other nearby states, including Massachusetts and New York, are planning to postpone full contact football to the spring.

Siegal said that the CIAC’s football committee had initially considered a spring season, but the CIAC’s Board of Control wanted the season to be held in the fall.

“I anticipate that the football committee will make recommendations [about modified activities] for this fall, and for 2021,” Siegal said. Those decisions will not only based on metrics, he said, “but … we live in New England.” The weather could be a major factor in the safety of playing football in the when the ground is frozen and there could be snow to contend with.

Siegal said he is confident that if a football season is proposed for early 2021, it will be timed to minimize conflicts for athletes who also play winter or spring sports.

“We’re going to try to remain as positive as we can,” Siegal said, to make good choices and follow best practices. “The majority of people want sports to happen.”

The CIAC, in its continued push for football to be played as a sanctioned high sport in the fall, also expressed concern about the formation of club football teams, which may receive approval from local health districts but not necessarily adhere to the CIAC’s proposed mitigation standards.

Siegal said he is not aware of any clubs being discussed in West Hartford, but he said he has heard about a club being organized in New Britain, separate from the New Britain High School coaching staff. “I wouldn’t be surprised if some AAU-type opportunities arise,” he said.

“If 11-on-11 full-contact football is not approved, but if a school district wanted to offer a club, that would be up to the individual district,” he said.

The Hartford Courant reported that sources have said a private football league is being organized in Fairfield County.

The emphasis in West Hartford, Siegal said, is continuing the process of safely opening the schools, which is going really well.

“I couldn’t be more happy, proud, and pleased with the kids,” he said.

All fall sports, including football, are continuing to engage in low-risk 60-minute practices which are a combination of non-contact sport-specific skills training and conditioning. While there is still some uncertainty about volleyball competition being held, the teams at Conard and Hall have started holding some limited skill practice sessions indoors with masks.

“We’re practicing indoors, in hopes that we can have a competitive indoor season,” Siegal said.

Siegal said that the CIAC communicated to athletic directors on Wednesday that they are going forward with the volleyball season with the additional mitigating factor of wearing masks lowering the risk of the sport.

In Monday’s letter, DPH has asked that the CIAC ensure that its Sports Medicine Committee is in agreement that it is safe to engage in competitive indoor volleyball, which is a “vigorous physical activity,” while wearing a face covering.

With the exception of football, “as of now we are scheduled for competition to begin Oct. 1,” Siegal said.