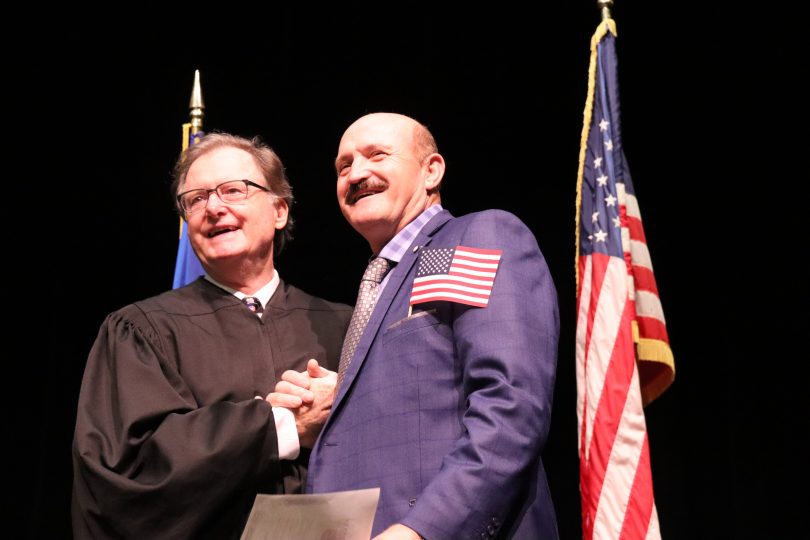 Two teachers at Kingswood Oxford in West Hartford, who are naturalized citizens, participated in the Election Day ceremony. 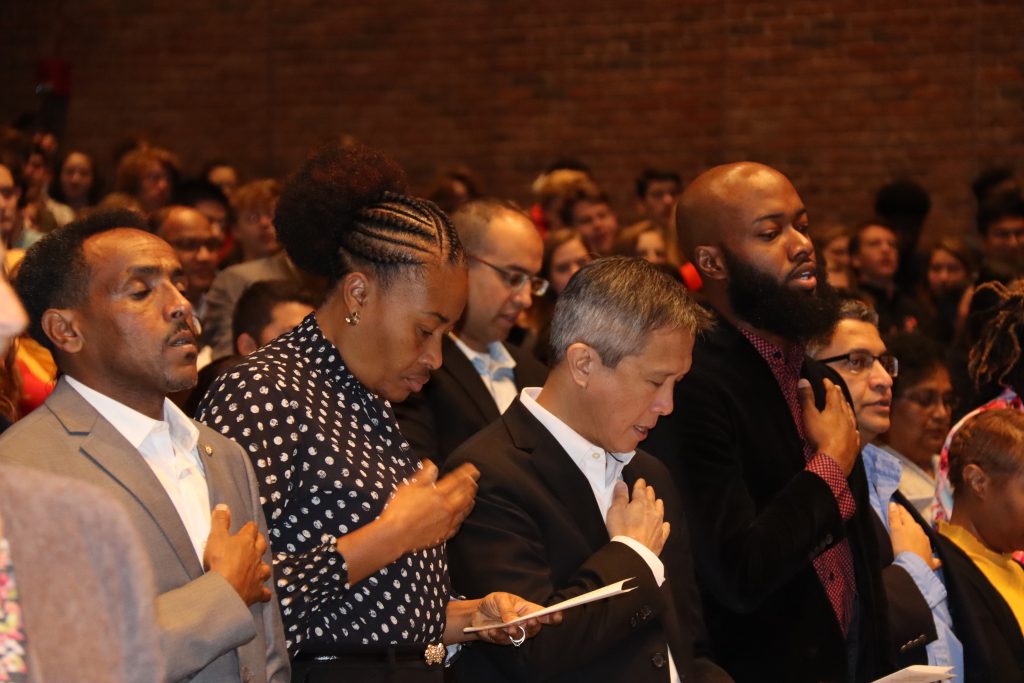 Head of School Tom Dillow shared that the strength of the United States resides in the fact that we are a nation of immigrants. “We are far more interesting, far more vibrant a country, and we are far more authentic a country because of our diversity. We become united because of our shared beliefs in freedom, equality, and opportunity.”

Thirteen years prior, Aslan and his wife took the same oath as the applicants in the theater, having arrived from Turkey. Although he and his wife lived a good and prosperous one in Turkey, they wanted to give their son a chance at a better future even though that meant a harder journey for them.

“The first generation often does [work harder] in America sacrificing and building a bridge for the next generation. All of you gathered here today are the red blood cells that oxygenate this nation, bringing your energy and fresh perspectives and culture to weave a tapestry in this great experiment in democracy,” Aslan said.

Naogan Ma left China thirty years ago as a 28-year-old married woman who lived in a freshman dorm at Wesleyan University. She remembered that her husband was so nervous before their own naturalization ceremony that he practiced driving to Bridgeport where the ceremony was to be held.

She reflected on the new beginnings for the applicants and what she learned in her own journey. Her advice included being engaged in their town and with their neighbors and to share their unique stories so that we can all learn and grow together. She told the parents to advocate for their children, go to their conferences, help with their homework and be a voice for them because that is the investment in the future.

“Be a voice for yourself. If you have an opinion, this is the place, the country where you can actually express your opinion. If you think you’re doing the right thing, try to make that happen. Lastly, have fun. No one is going to criticize you or punish you if you are enjoying your life. Enjoy it. And, as all kids learned in kindergarten, make this land a better place than when you first landed here,” Ma said.

Judge Chatigny said that the Oath of Allegiance is the first step in the process of obtaining citizenship through Naturalization. Once the oath is taken, the new citizen is entitled to participate fully in our democracy, on an equal footing with all citizens, with the right to vote, run for public office, and serve on a jury. These rights define us as American citizens.

“As citizens, we owe it to ourselves and to each other to take the time to vote. Otherwise, our democracy cannot be truly representative of all the people, as we want it to be,” he said. Chatigny read the names of the countries represented in the audience: Albania, Bangladesh, Belarus, Canada, Columbia, Dominican Republic, Ecuador, Eritrea, Ethiopia, Finland, Guyana, India, Israel, Jamaica, Mexico, Peru, Philippines, St Lucia, and Thailand.

Immigration Services Officer Camille Fisher motioned the court for the candidates to be admitted as citizens of the United States. The 30 applicants took an Oath of Allegiance where they pledged to defend the Constitution and the laws of the country. After the oath, Judge Chatigny explained that our nation is governed by the rule of law and the Constitution.

KO students participated in the ceremony by singing a stirring rendition of the National Anthem and handing flags to the newly-minted citizens. The Upper Prep Choraliers concluded the program by singing “This Land Is Your Land.”

There were other KO connections to the ceremony, as well. Chatigny is a KO parent and he is married to the school’s beloved Upper School teacher Stacy Savin. Middle School teacher Jeff Gurganus’s wife was also one of the new citizens at the ceremony. KO will treasure this moment as we, as citizens, saw our country and the beautiful people who comprise it at its finest. 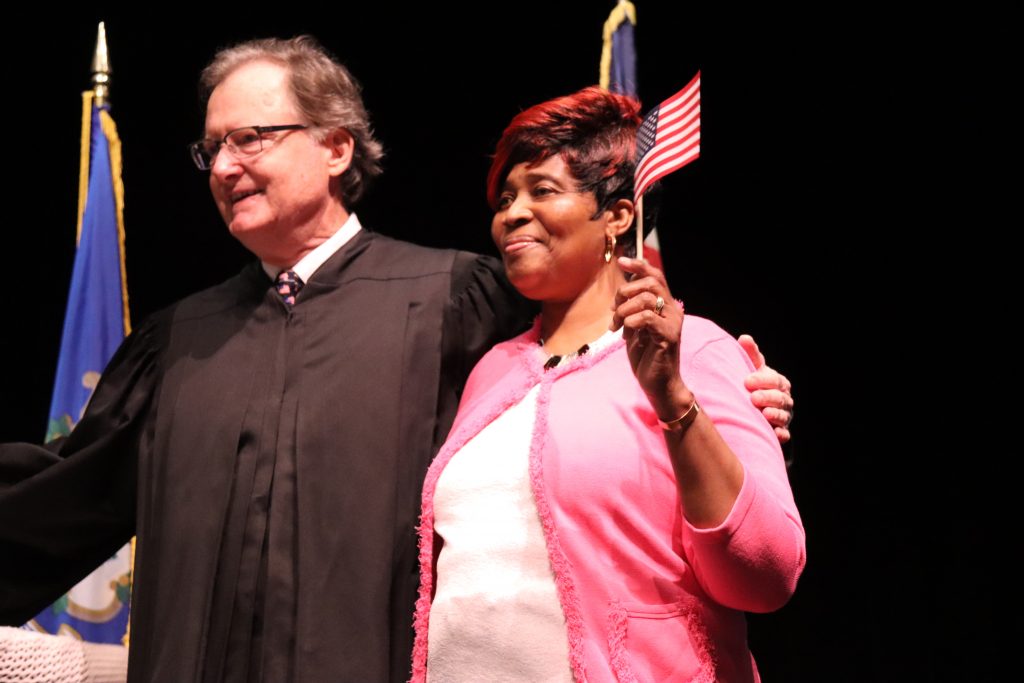 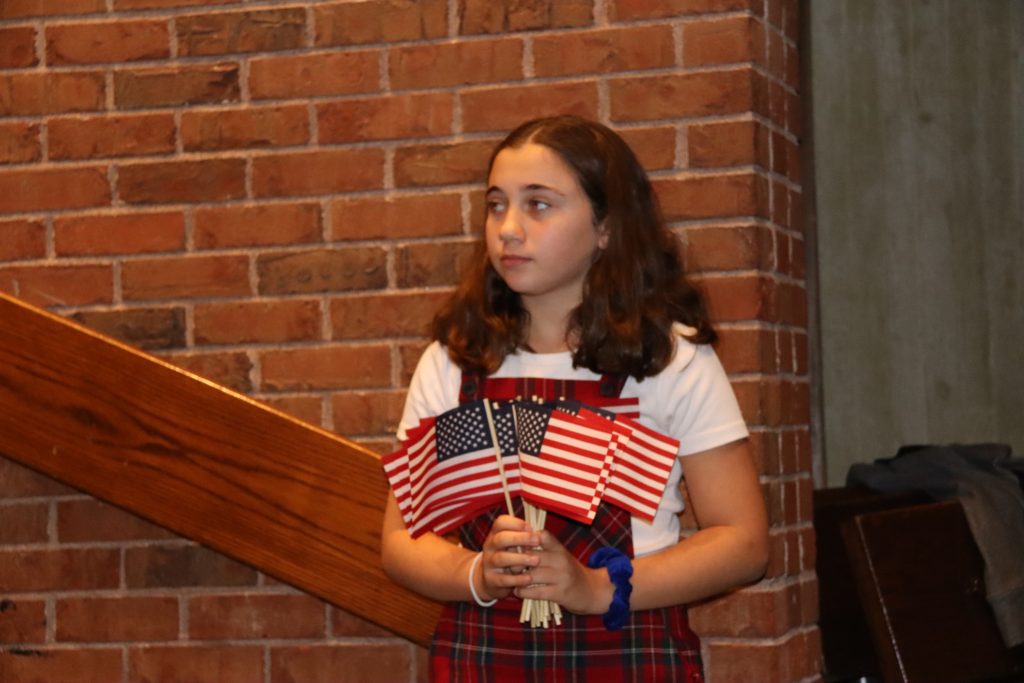