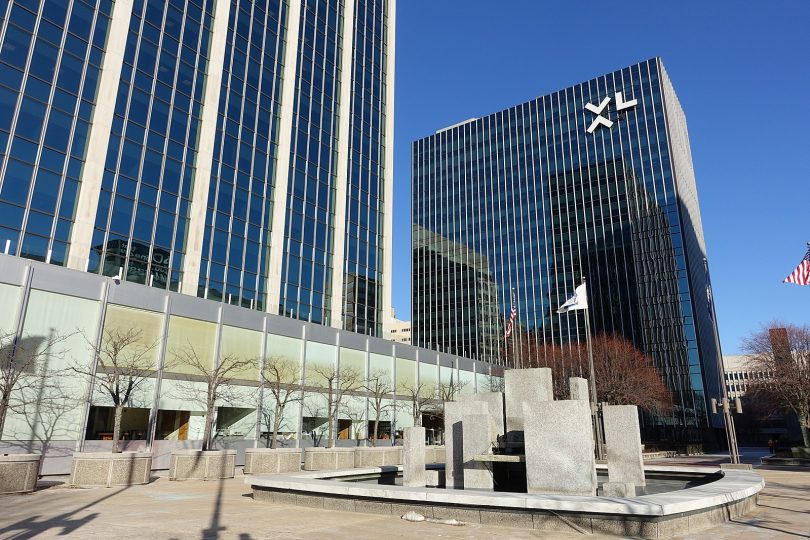 Constitution Plaza in Hartford, an office enclave built on a platform over a parking garage, replaced the city’s ethnic East Side or Front Street neighborhood. Wikimedia. Courtesy of CTMirror.org

West Hartford’s Blue Back Square was built on virtually abandoned commercial space, in comparison to some urban renewal which involved demolishing residential neighborhoods.

By the middle of the last century, U.S. cities were showing their age. They had endured the Great Depression and World War II, two decades of deferred maintenance. They were losing residents and businesses to the suburbs.

But a confident America, that had just turned German and Japanese cities to rubble, stepped up.

Congress passed The Housing Act of 1949, which made federal funds available to revive cities. Thus began a profoundly mixed blessing, the era of urban renewal.

Cities across the country – New Haven and Hartford were among the first – embarked on bold, extensive and expensive revitalization programs. These usually involved clearing older, smaller buildings of varying styles and replacing them with larger, modern structures as well as bringing major highways through the hearts of cities.

Despite massive demolition, relocation (“slum clearance”) and construction, New Haven and Hartford didn’t turn around. Both continued to lose jobs and population. Urban renewal efforts in Bridgeport, New London, Bristol, and other cities fared no better.

This was also true across the country. Between 1949 and 1973, when President Richard Nixon pulled the plug on the federal urban renewal program, nearly 1,000 cities built more than 2,500 projects. Some worked, some were partially successful, but “too many … of the projects (were) shameful failures,” wrote former New York city planner and Yale professor Alexander Garvin in his seminal 1995 book “The American City: What Works and What Doesn’t.”

That was then. Now many Connecticut cities are seeing a 21st century renewal, welcoming millennials and empty nesters, new businesses and new housing.

Are they getting it right – or at least better – this time?

Mistakes of the Past

The early projects were rife with error and miscalculation. New Haven’s Chapel Square Mall is illustrative.

As the centerpiece of a multi-faceted renewal program that drew national attention, New Haven redevelopment officials wiped out a big swath of downtown to build a shopping mall, hotel and parking garage. They built a highway from I-95 to the parking garage, wiping out the Oak Street neighborhood.

The idea, Garvin reports, was that if downtown were made more accessible to suburbanites, it would retain its position as a premier retail center.

The idea was based in part on bad data. The city had a marketing study saying its 1950 population of 164,000 would remain stable for 40 years. By 1980, it had dropped to 126,000. Nonetheless, had the concept worked, the booming suburban population would have driven in and made up the difference.

“From the start, redeveloping downtown New Haven was a mistake,” Garvin wrote.

The project also suffered from being top down – experts telling the neighborhood what it needed. The neighborhood, not surprisingly, didn’t go gently.

“They learned that without a community process the work is counterproductive,” said Alan Plattus, director of Yale’s Urban Design Workshop.

Aside from severing community fabric and subjecting residents to untold stress and delay, the early redevelopment projects failed to see the value in existing structures.

“They tore down way too many older buildings,” said Haddam architect and city planner Patrick Pinnell, who recalled urbanist Jane Jacobs’ observation that old buildings are the best friend of new businesses.

On the plus side, New Haven learned its lesson as the program moved forward. When redevelopers got to the historic Wooster Square neighborhood, they listened to the community, and used a scalpel instead of a sledgehammer. They repaired existing buildings or infilled compatible structures, added small parks and a school.

The result is – to this day – one of the more elegant urban neighborhoods in the state.

Another issue in many of the early projects was connectivity – or lack of it.

Hartford’s Constitution Plaza, an office enclave built on a platform over a parking garage, replaced the city’s ethnic East Side or Front Street neighborhood. It was supposed to be connected to downtown on one side and to the Connecticut River on the other. It was never connected to downtown and wasn’t connected to the river for 30 years.

New Haven’s Church Street South low-income housing project, built across the street from the train station, was poorly connected to the rest of the city, probably contributing to its demise. It was condemned four years ago and is being demolished.

Connectivity promotes variety, access and safety, Pinnell said. Imagine the traditional urban street grid. There are several ways to get from points A to B,  so if one street is blocked, you take another. Each streetscape offers a different experience. And with eyes on more streets, an area is safer.

The Church Street South project is an example of another issue – things are sometimes simply built in the wrong place.

New London, for example, built a parking garage on what would have been a prime hotel site, near the train station and the harbor, and a police station on a potential commercial site with a view of the harbor, the city’s local paper observed years ago.

Finally, some projects ended before they were finished. Hartford’s Constitution Plaza was supposed to include a housing component; New Haven wanted to build more housing.

But as the program continued, opposition and lawsuits increased, here and across the country. Many detested urban renewal, calling it urban destruction.

“It was an assault on the American city, particularly parts of cities where disenfranchised people lived,” said Hartford architect and activist Tyler Smith.

Time moved on, as it will, and thinking about cities changed. The urban renewal program emphasized the new at the expense of the old, critics charged it went too far. Efforts to demolish such structures as New London’s historic H.H. Richardson railroad station and even Hartford’s Old State House – city leaders considered demolishing the State House for a parking garage in the early 1970s  – caused a backlash. Preservationists organized – and ultimately prevailed

There also came a recognition that bulldozing highways through the middle of cities served cars well but wreaked havoc with municipalities.

“I think we’ve recognized that the auto-oriented nature of so much of what was built was a betrayal of the values and experience that have made cities livable,” said Plattus.

The past two decades have seen efforts in cities from Boston to Seattle to remove freeways or elevated highways from their central areas, and replace them with urban boulevards or tunnels, at vast expense. Connecticut officials are in the lengthy process of removing the I-84 viaduct in Hartford.

About 1990, three factors emerged that boosted downtowns, and Garvin describes them in a new book, “In The Heart of the City,” published last month. The first was a reduction in crime. The second was the success of business improvement districts. BIDs, as they are known, clean, beautify and promote downtowns and make them safer and easier to navigate. “They have made all the difference,” Garvin said.

Finally, the internet. Companies no longer needed paper filing space. So, companies in Class B office space have moved to smaller Class A space, freeing up their former digs, which developers are turning into housing. Thus, “we’re seeing emerging high-density, mixed-use downtowns.”

Another factor that promoted urban revival was the belated realization that suburban sprawl has a downside. Planning officials agree that miles of strip malls and subdivisions increase traffic and energy use, thus causing air and water pollution, diminish forests and farmland, and isolate the poor in urban areas.  In response the state has encouraged “smart growth” development in town centers and along transit corridors, and provided funding for transit-oriented development.

The newer developments tend to be more incremental than the massive urban renewal era projects, in part because many are privately funded and smaller projects are easier to finance. Builders typically restore older buildings or carefully infill new ones to offer a mix of residential and commercial uses – more Wooster Square than Chapel Square. Examples include South Norwalk, Middletown’s Main Street revival, Manchester’s Cheney Mills and New Haven’s Ninth Square.

But scorched earth redevelopment still pops up on occasion, as it did in the last decade with New London’s Fort Trumbull project, where a neighborhood was demolished after a bitter court battle – and nothing was built on the site.

The failure of New Haven’s downtown mall didn’t dissuade some other cities from trying it. Waterbury’s Brass Mill Center, which opened in 1997 on the site of  the aged and crumbling Scovill brass complex, is one of the most recent efforts. Like other of the state’s malls it has lost major tenants such as Sears and Payless, as the world of brick-and-mortar retail changes.

“It’s a nice mall, it really is, but it is in a tough industry. It has issues because major national retailers have issues,” said Dave Krechevsky, direction of economic development and public policy for the Waterbury Regional Chamber of Commerce.

The mall is important to the city. It is the third largest taxpayer, sending $4.1 million to city hall last year, according to the tax collector’s office. and employs hundreds of residents. It looks better from the highway than a derelict factory. Finally, “it has a movie theater, which does well,” Krechevsky said.

Downtown malls still can work if market conditions are right – Stamford Town Center has been successful – but store retail is increasingly challenging. Time Magazine reported in 2017 that a quarter of the country’s 1,100 malls could be closed by 2022. Business Insider recently reported that nearly 6,000 stores have closed thus far this year, which is more than closed in all of 2018.  Because of the rapidly changing retail world, Pinnell said, buildings of the future must be flexible, able to easily change uses – say, from retail to residential – as demand warrants.

So the post-urban renewal era has been sobering. City officials learned too late that much of what was demolished – narrow streets with interesting older buildings of different styles – was what people liked about cities, said planner and author Alan Mallach in a recent interview. On the plus side, people are moving back to many cities for reasons people always gravitated to cities – arts, business, physical contact, convenience, excitement.

But Mallach noted that the revivals of many cities has been largely limited to their downtowns. The challenge now is to spread the wealth to struggling neighborhoods.