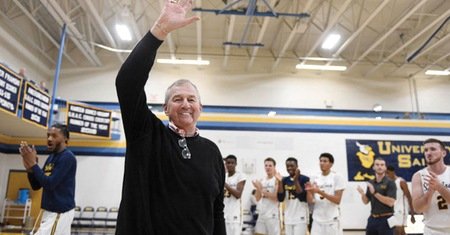 Submitted by the University of Saint Joseph

University of Saint Joseph (USJ) and Hall of Fame head men’s baketball coach Jim Calhoun joined an exclusive club Friday night, earning his 900th career win as the Blue Jays (11-2) downed the Pratt Institute Cannoneers (5-7), 105-61, inside the O’Connell Center in non-conference action. The victory is the 10th straight for the Blue Jays as they improve to 11-2 on the season.

“Here I am in this situation because of so many great players and so many great schools, just so many kids,” Calhoun said about reaching career win 900. “They [players] fill a void that was missing … I do love it [coaching]. I know it doesn’t appear that way all the time. It’s a funny kind of love, that’s all I can tell you. But it’s a true love … As long as I coach it has to be all about building the relationships with my players – the day I lose that, I don’t care about the Xs and Os, then I won’t coach. It’s got to be about them. It’s got to be about all of us.”

Victory 900 was never in doubt. The Blue Jays raced out to a 51-28 lead at the half and were never threatened. Sophomore guard Delshawn Jackson Jr. (Hartford, CT) led the way with 21 points (7-11 FG, 1-3 3FG, 6-6 FT) and junior forward Jordan Powell (Middletown, CT) logged his second career double-double with the Blue Jays finishing with 15 points and 10 rebounds. Sophomore gyard Tyree Mitchell (East Hartford, CT) was a spark off the USJ bench, netting a career-high 19 points and grabbing a career-high seven boards. Sophomore Griffin Levine (Dallas, TX) had a game-high 25 points to go with five rebounds to lead the way for the Cannoneers.

“It’s crazy because we’re all from here and we all watched him when we were young on TV, winning national championships,” Powell said. “Seeing him every day, it’s really a blessing. He doesn’t make it about him. He helps us on the court and off the court.”

The USJ men’s basketball team is back inside the O’Connell Center Tuesday night when they host NESCAC opponent Williams College. Prior to tip-off at 7 p.m. between the Blue Jays and Ephs, USJ will honor Coach Calhoun with a brief ceremony to celebrate his 900th career win. Tickets to the game can be purchased here.