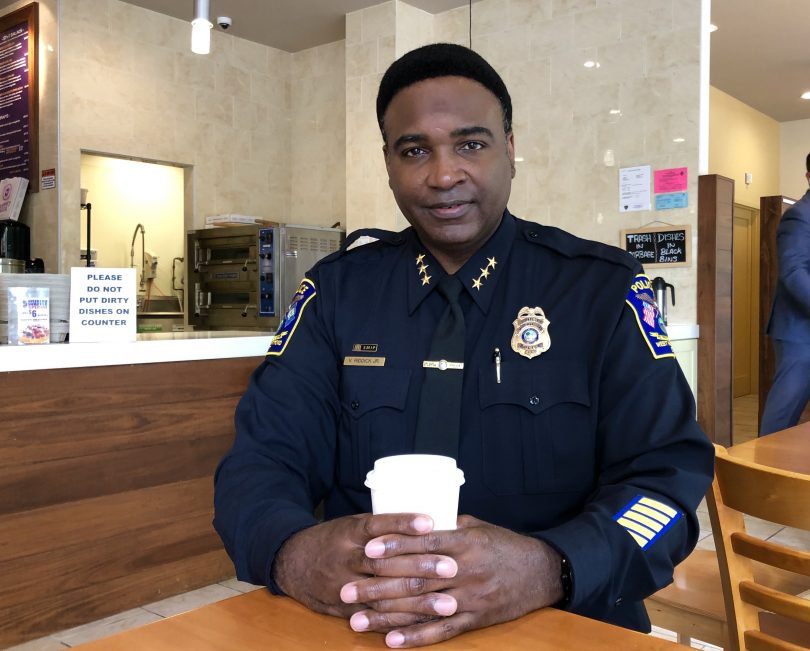 West Hartford Police Chief Vernon Riddick recently sat down with Ronni Newton for a light-hearted conversation about the man behind the job. ‘Coffee with …’ is a monthly feature that appears in West Hartford LIFE. This piece appeared in the October 2019 issue. 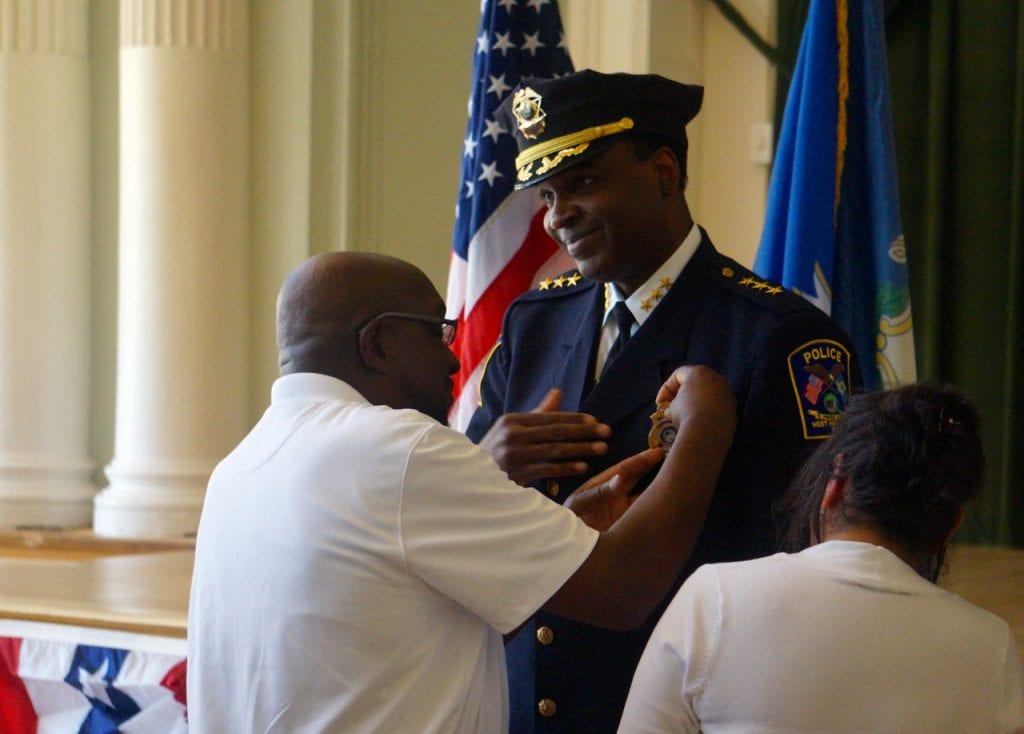 At his swearing-in as West Hartford Chief in 2018, Vernon Riddick is pinned by his father, Vernon Riddick, Sr. At right is his wife, Sandra. Photo credit: Ronni Newton (we-ha.com file photo)

Vernon Riddick was born and raised in Waterbury, graduated from Kennedy High School, and spent a post-grad year at Choate before attending Tufts University where he obtained a bachelor’s degree in political science in 1989. Tufts was a great school, he said. “A wonderful experience.”

Riddick will turn 53 in October, and is still a Waterbury resident.

Riddick is 6 foot 6 inches tall, and few would be surprised to hear he played basketball at Tufts.

After college Riddick began pursuing a law degree and was interested in an FBI career. He attended Rutgers Law School in 1991-92, but at the time he had two small children and financially it was too difficult. He said he anticipated returning to law school eventually, but never did, although he did obtain a master’s in public administration from Post University and graduated from the Senior Management Institute for Police and the FBI Law Enforcement Development course.

“I said I would get a taste of law enforcement at the local level, and never left,” Riddick said.

The “two young children” he had when he was in law school – twin daughters – are now 30. One works for the Department of Children and Families and is pursuing her master’s degree and the other is a certified nursing aid. He and his current wife have a 20-year-old daughter who is attending community college.

Coffee order: Black with a touch of cream. No sugar. Sometimes I’ll just do black.

Perception vs. Reality: And more … any police chief’s job is challenging and being new you have the difficulties of learning people’s names, and streets, and everything else at the same time, and being chief you are the face of the organization. Learning the dynamics of politics … and doing the right thing all the time for the right reasons. Budgets … the accountability is still the same. I’m busy every day.

Best advice received: Don’t make decisions when you’re angry. Believe half of what you see and none of what you hear.

Top of your bucket list: My goal is to take my entire blended family, my wife’s side and my side, on a nice vacation and not have anybody pay for anything. And just for at least for a week, hang out together in Florida or Hawaii.

No one would suspect: I’m funny … when they first look at me they see this stern exterior, but I’m funny. [Editor’s Note: One of the first times I spoke with Chief Riddick I remarked how short I felt next to him. He told me it was “just the lighting.”]

Biggest fear: Failure. But when you have your faith in God you learn to accept … letting people down, letting yourself down. Not a short-term failure, a long-term failure.

Biggest adrenaline rush: Family, when a family gets together it’s a good thing. The older you get the more you realize how important those times are.

Skill you would like to master: I’d like to be able to type faster. I think too much … a better mastery of technology.

Favorite tradition: Thanksgiving is big in our family. That’s the family’s favorite holiday food … for us it’s like a three-day feast.

Favorite sport/team: When I was younger my favorite sport was basketball but now I enjoy football and basketball equally. My favorite team: Yankees for baseball and Giants for football … I have more affinity for watching a Yankee game than a Knicks game … College basketball, UConn of course. There’s only one answer there.

Favorite food: I don’t have a favorite food. I eat almost anything … I’m not a sushi guy; my food has to be cooked.

Swore you’d never do, but did: Marriage. I never said I would get married, I never wanted to be tied down, I figured it was too much of a headache but now that I’ve been married 19 years I can’t see life without being married now, at least for me. It’s a process, so part of that wisdom to my younger self …

What do people not appreciate enough: People do not appreciate service and sacrifice … Value someone’s time that they took from doing something else.

Where everybody knows your name: My home. My name’s out there, around here, police headquarters.

Defining moments: Two things – the death of my mother when I was 11 years old and she was only 32. [His mother died unexpectedly of a debilitating rare heart disease.] You go from a two-parent loving household – I’m the oldest of three –  and the next thing you know we go visit her on a Friday and she’s gone Sunday … I remember it was the first time I saw my father cry. He was my hero, my rock. I saw the humanity in a person … A couple days after that he gave me the key to my apartment. He said I need to depend on you, you are now the man of the house. It was a green key, I remember it like it was yesterday … Second was giving my life to the Lord and really devoting myself to God. Being a “good” person and realizing good isn’t enough. Furthering that belief that it’s about sacrifice and change.

Favorite season: I love summer. The older I get I’m getting a greater appreciation for fall but it’s hard to enjoy fall because you know winter’s coming.

One of your life lessons: My life lesson is not about you it’s about what you can do for others. If everyone has that, if we try to live our lives that way it means everyone takes care of everyone by assisting the greater good. We have to be here for a purpose other than just ourselves, we just have to be.

Remember me for: Sacrifice, honesty, integrity, and being a servant, a servant of God, trying to live a good clean life.

Money or longevity: That’s easy, it’s longevity. The longer you’re here the more opportunity you have to make more money. Money doesn’t give happiness. It makes things easier but if it did you wouldn’t see multi-millionaires and billionaires committing suicide.

Second chance, yes or no: We have to have second chances, we’re not perfect … You have to make mistakes then you learn … [Looking at this question as the chance for a do-over] The obvious answer is yes … I’d love to have my mother back but I don’t know what would have occurred. Would we have lost somebody else … but I don’t know the domino effect of that. … I lost my brother in 2010 to brain cancer, he was also a police officer, a lieutenant, we worked in offices right next to each other. Of course I’d like to have him back but a lot of loved ones have passed on. It’s hard to say … you don’t know what impact that has.

Ten years from now: I can’t answer that.

Hobbies: I like to read. I try to read the bible daily. I just finished reading Colin Powell’s book “It Worked for Me.” I’m going to start reading a couple of other books …  Michelle Obama’s book “Becoming” I haven’t had a chance to read that and there’s another leadership book Bishop T.D. Jakes’ “Soar.” I try to get better each and every day.