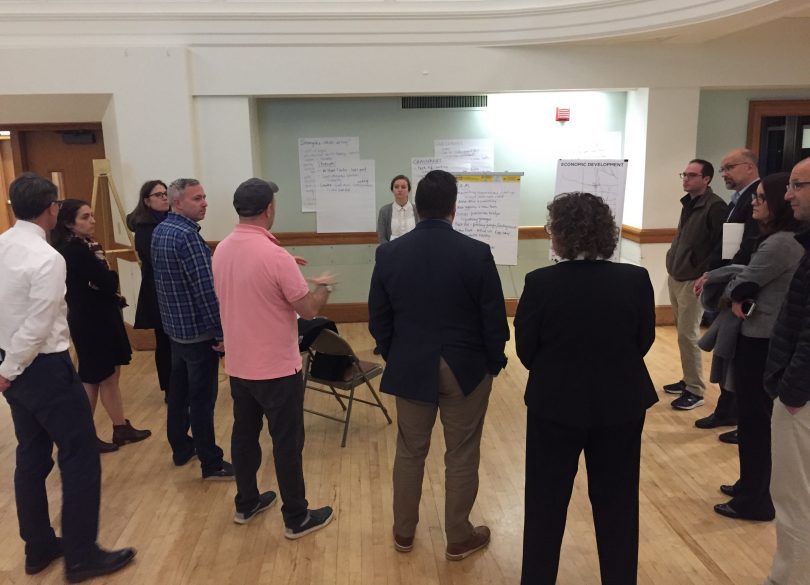 A planning workshop was held Tuesday night at West Hartford Town Hall to provide updates and the opportunity for community input on the vision for the town’s future. 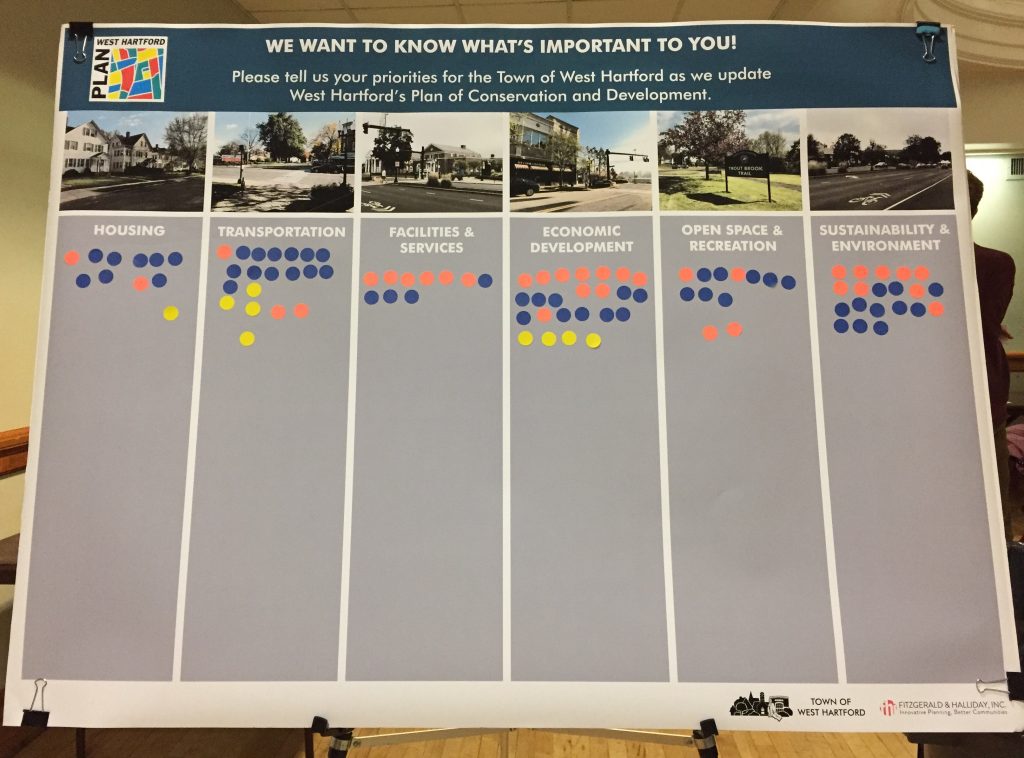 The Town of West Hartford is in the process of updating its 10-year Plan of Conservation and Development (POCD), and on Tuesday night a planning workshop was held at Town Hall to solicit public input.

The PODC is a document that serves as a vision statement, a roadmap, and a set of guiding principles used for zoning decisions. Connecticut General Statutes require all municipalities to either prepare or amend – and adopt – a POCD at least every 10 years in order to be eligible for discretionary state funding, and West Hartford’s existing Plan is for the 10-year period from 2009-2019.

Between 35-40 people attended the workshop, which was facilitated by Fitzgerald & Halliday, the town’s consultant for the POCD update project. 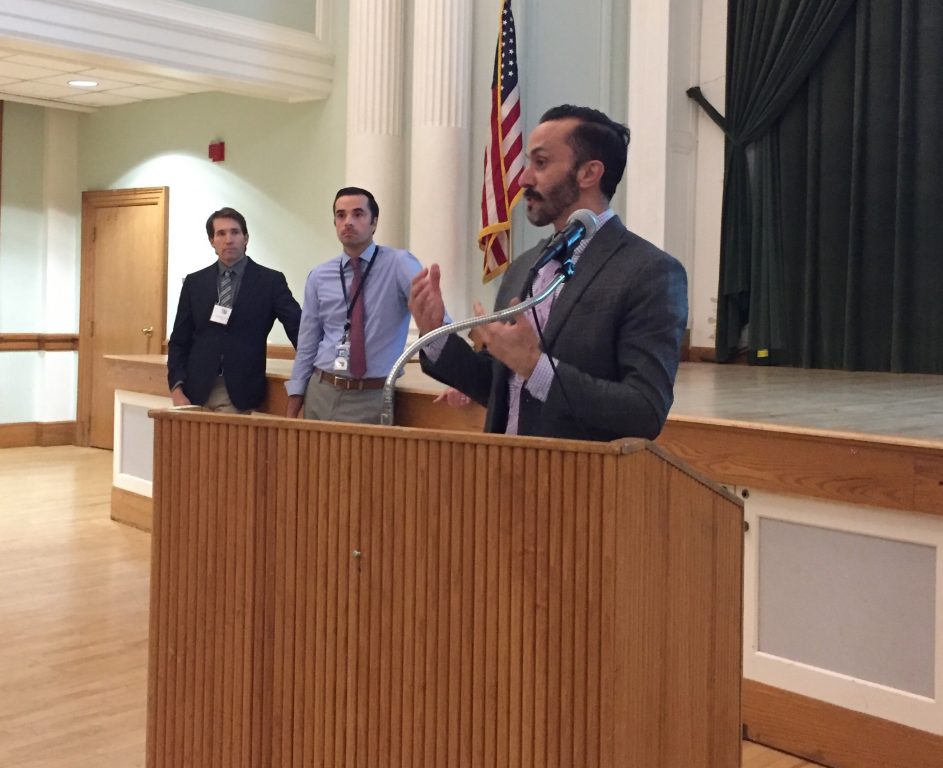 “Every 10 years our commitment changes drastically … we are given the responsibility of drafting the town’s vision statement for the next 10 years,” said Kevin Ahern, chair of the Town Plan & Zoning (TPZ) Commission chair. The TPZ is responsible for preparing the POCD, and Ahern said that public input will be a major factor, and he appreciates that the West Hartford community shows up and cares.

Town Planner Todd Dumais said that while the POCD is a guide for transportation, land use, types of economic development, and housing – and must address factors such as affordable housing, the environment, and state and regional development plans – it’s more than just a requirement.

“The process goes beyond that to give us the opportunity to measure progress,” Dumais said. It also looks to identify concerning trends, establishes a dialogue with residents and stakeholders, and provides a foundation for new initiatives. 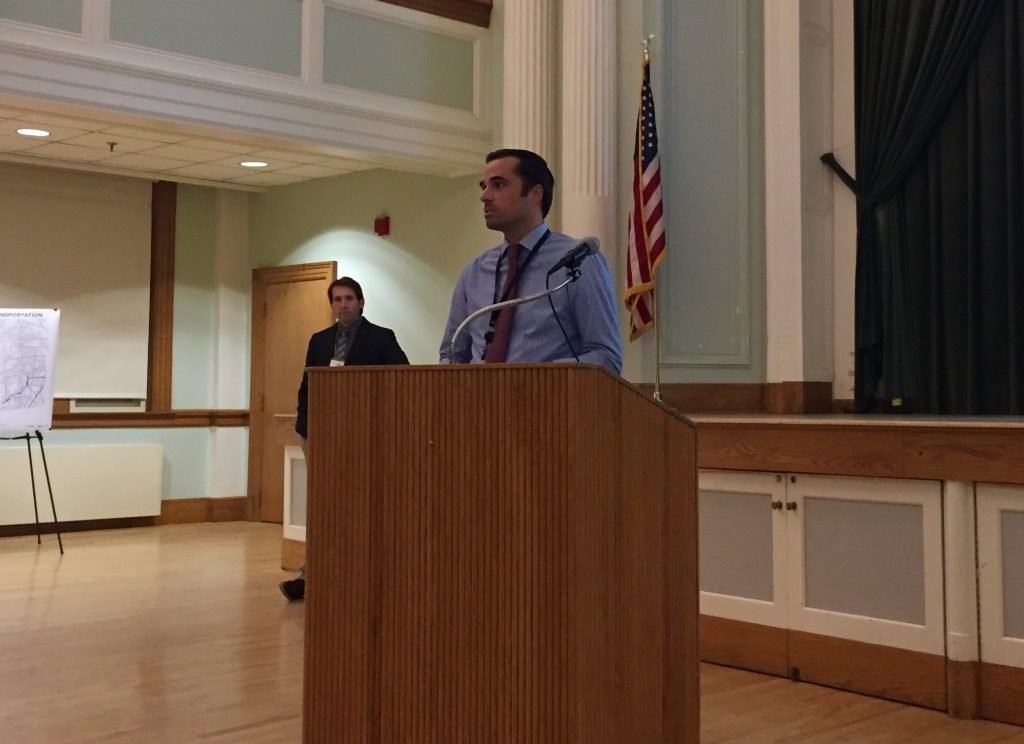 The 2009 POCD had seven different goals based on the required factors. “Update is critical,” Dumais said. The town is well-informed by the current plan, however, and it makes more sense to strategically update it rather than starting from scratch.

Francisco Gomes, the project manager with the town’s consultant, Fitzgerald & Halliday, presented an assessment of trends.

“West Hartford’s population trends have been very similar to comparable communities,” Gomes said. While the population growth has been very flat, there are more residents between ages 5-24, but fewer students. A possible reason for the reason for the trend, Gomes said, is that high school and even college graduates are living with their parents for longer period of time. Home values in West Hartford are trending up, and have risen 10 percent since 2011. Jobs are up 5 percent from 2002-2015.

Economic development trends point to diversification, with the opening of the Delamar Hotel, co-working facilities, and expansion of Legrand. “[There is] concern about more traditional retailers not having the same presence they may have had 10-15 years ago,” Gomes said, as well as concern about the proliferation of restaurants. 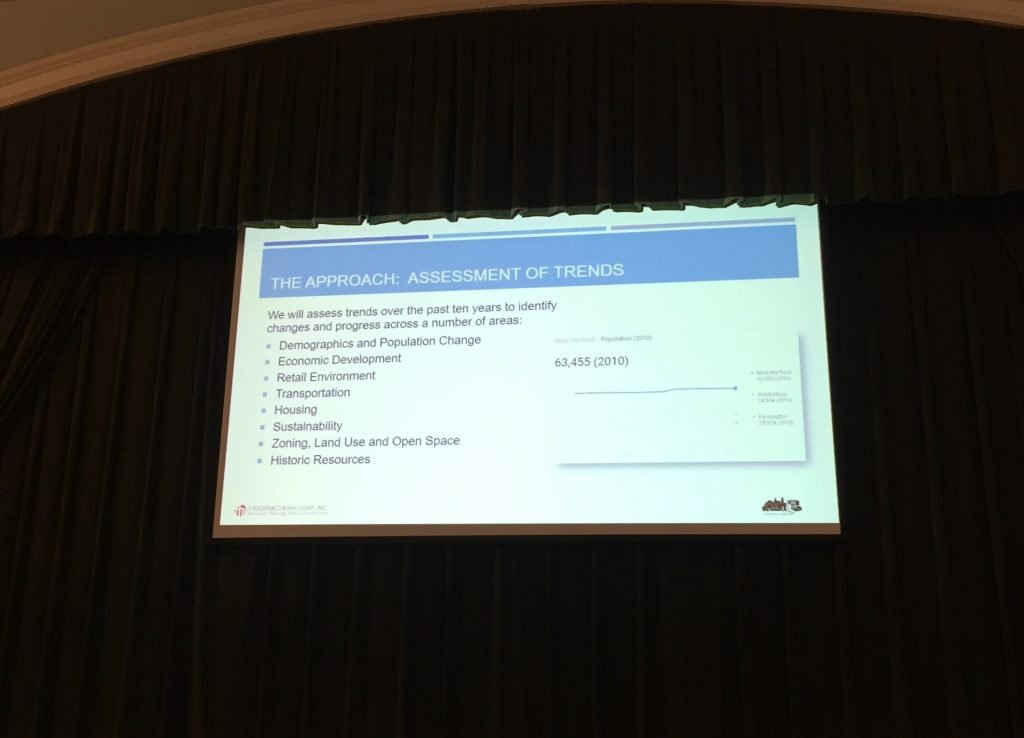 Changes in the transportation landscape are also impacting West Hartford, Gomes said, noting the arrival of LimeBike and CTrail to the area, as well as CTfastrak and the role of ride share services like Uber.

“West Hartford is seeing some infill development and redevelopment of properties,” Gomes said regarding housing, and he said he is interested in learning what the community thinks of those trends, and if people think the town needs more housing choice.

“The town has been very progressive with respect to sustainability,” said Gomes, noting that the new Charter Oak International Academy building has been built to the LEED Gold standard, Aiken Elementary School is 80 percent solar powered, and the town recently tested a composting program.

Other trends to be assessed include maintaining a balance between development and open space, and preservation of the town’s historic resources.

“Public engagement is a very important part of [the process],” Gomes said. The process began in September and the goal is to be done by April 2019. Stakeholder meetings have been taking place, and nearly 1,000 people have participated in an online survey thus far. Future opportunities for public outreach include “pop-up” meetings at events like the Holiday Stroll and “thematic meetings” focused on a specific factor.

About two-thirds of those in the room had already completed the online survey, but were also given the opportunity to participate in an interactive survey during the planning meeting.

Questions were similar to the online survey, and included what people like and don’t like about West Hartford, why they chose to live or work in town, what they feel should be changed and what should not be changed, and what concerns they have for the future. 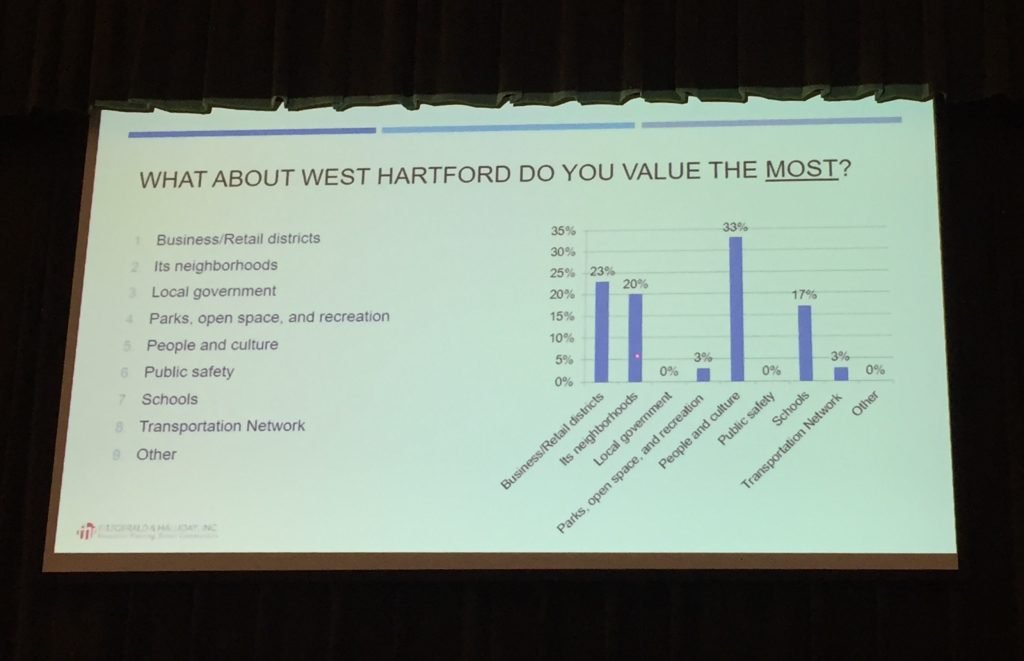 Some results from interactive voting at the planning workshop. The public provided input Tuesday night on the update to West Hartford’s Plan of Conservation and Development. Photo credit: Ronni Newton

Results from the respondents in the room included that West Hartford’s “people and culture” was a primary reason they chose to live in West Hartford, a desire to continue to grow and change incrementally was preferred by 72 percent of the crowd, and 52 percent think going forward the town should give greater focus to its business and retail districts, as well to neighborhoods and transportation. Respondents overwhelmingly voted the town’s business environment are “good,” and 52 percent said they believe that property taxes are high.

For the final question: “Should the town continue to invest in environmentally sustainable infrastructure and practices,” 97 percent said yes, Gomes said. 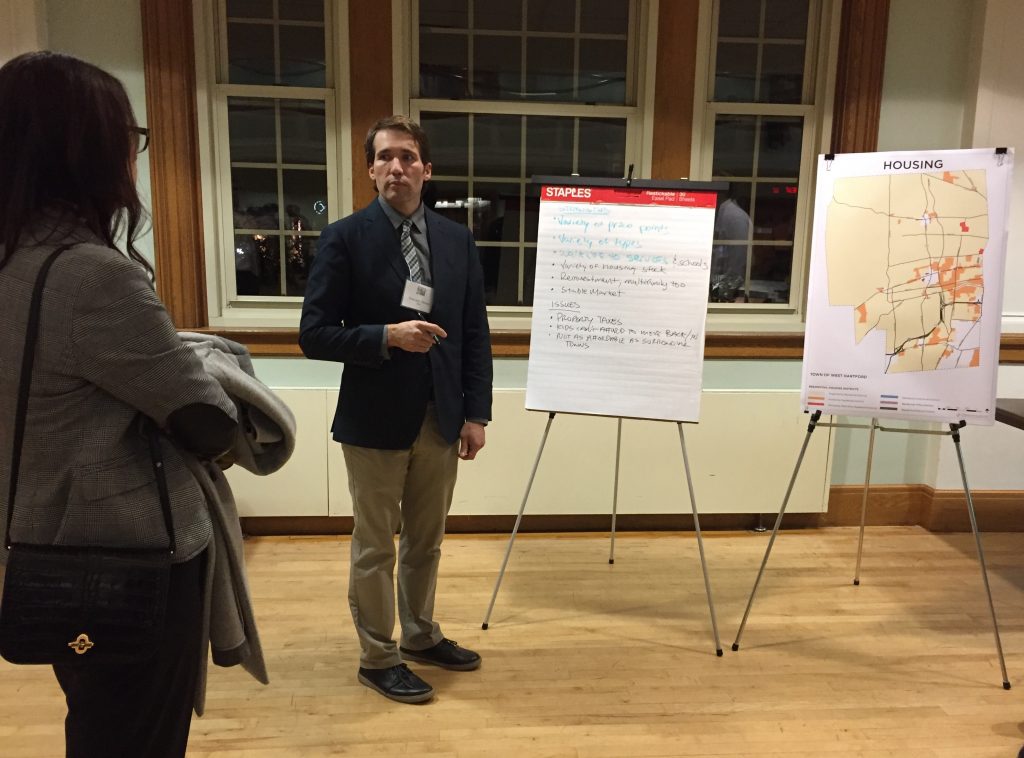 The breakout sessions gave the public an opportunity to provide focused feedback on strengths, issues, and ideas about specific topics. The topics included sustainability and the environment, transportation, economic development, housing, parking and other town infrastructure, and historic and cultural resources, and each person attended three.

Those who attended the transportation breakout group touted West Hartford’s grid system and sidewalks, but noted a need to address parking in neighborhoods near the center and for improved bicycle infrastructure. Traffic congestion, speeding, and parking were also raised as issues, and ideas included implementation of a shuttle between districts in town, protected bike lanes, and improved bus routes.

Housing strengths included the variety of types of housing and price points, the walkability of neighborhoods, and the stability of housing prices in West Hartford. High property taxes were cited as an issue.

Dense concentration of retail areas was noted as a strength in the economic development breakout group, as well as West Hartford’s “high quality consumer.” Diversity of businesses as well as the town’s responsiveness to businesses were indicated as strengths. Issues included high taxes and not enough locally-owned businesses. Ideas raised for consideration included more office co-working space, a parking garage on Park Road, a greater focus on the New Park Avenue corridor, and the creation of a redevelopment authority.

Disappearing open space was noted as a concern in the group discussing the environment, as was the continued use of plastic bags, too-low levels of recycling, and a need to address climate change.

Beth O’Brien said she has lived in West Hartford for about 18 months, and previously lived in New Mexico. She moved to town to be near her children and grandchildren, and just remodeled her home on Arapahoe Road. “I think the wonderful thing is that we have so many opportunities here,” O’Brien said. “I think we should go full steam ahead with growth and development.”

O’Brien said she sees a need for more affordable housing for young people.

Kevin McMahon, who lives on Woodrow Street in the Center, said he thinks that housing development should be expanded, including in the town’s industrial areas.

“This is a great opportunity for any community to participate in laying out the vision for the next decade or decades,” said Kimberly Parsons-Whitaker of the POCD development process.

The online survey will remain open throughout the month of November and once it closes the data will be available to the public on the project website. Gomes said it’s not necessary to live in West Hartford to complete the survey. The survey responses will be taken seriously and will be factored into some of the decision making, he said. Click here to complete the survey.