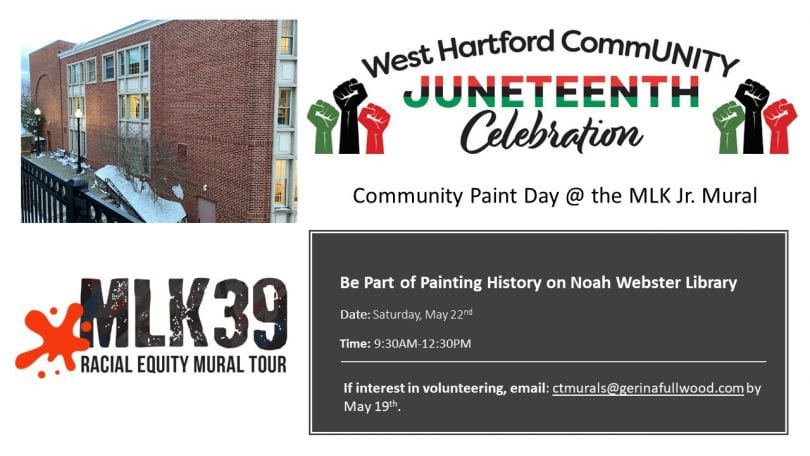 CT Murals is partnering with multiple local groups to paint a large-scale mural on the side of the Noah Webster Library in West Hartford Center. 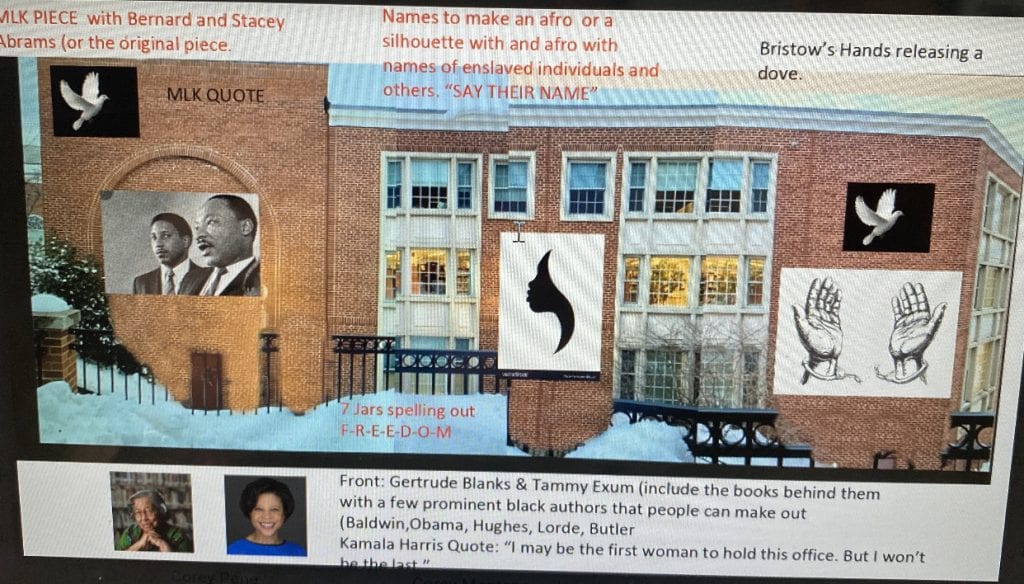 Outline of elements of West Hartford’s Racial Equity Mural. Courtesy of RiseUP for the Arts.

A community paint day will be held on Saturday, May 22, with the public invited to participate in several activities in preparation for the unveiling of West Hartford’s MLK39 Racial Equity Mural on Juneteenth on the side of the Noah Webster Library in West Hartford Center.

Racial equity murals being installed in communities throughout the state are a project of RiseUP For the Arts, and Matt Conway, executive director of RiseUP, said the inspiration for the MLK39 project began when a single mural, painted by artist Ben Keller, was unveiled in Manchester on Martin Luther King Jr. Day this year.

The above is an outline of the figures to be represented in the final mural, but not a sketch, Conway said. The mural is being designed and painted by professional and nationally-recognized artist Corey Pane, a West Hartford resident.

Prominent national figures to be featured on the mural will include Martin Luther King Jr., Dr. Bernard Lafayette, and Stacey Abrams. State Rep. Tammy Exum, Gertrude Blanks (the first Black graduate of West Hartford’s Hall High School), and Bristow, an enslaved man from West Hartford who was freed and is the namesake of one of the town’s middle schools, will also be represented.

The mural will stretch along the stairway to the Blue Back Square courtyard, from the ground to the roof of the library, and will also wrap around the corner to a portion of the building that fronts South Main Street.

“The volunteers will be helping to paint the ‘FREEDOM Jars’ on the wall,” Conway said. “The jars represent the jars that are on display at the Equal Justin Institute’s museum in Alabama. The jars in the museum were collected from different lynching sites throughout the country.” More information can be found here.

Volunteers from the community will also have the opportunity to engage in the painting of the sidewalk with temporary chalk, and painting on individual canvases that they can bring home. Canvases, paint, and sidewalk chalk will be provided.

The multi-faceted project is part of the MLK39 initiative and the West Hartford installation is being created through a partnership between CT Murals, the Town of West Hartford, the CT Center for Nonviolence, Concerned Parents of Color, Unity Green Committee, and West Hartford African American Social and Cultural Organization (WHAASCO), as well as other members of the community and organizations, including the town’s youth.

Those interested in volunteering are asked to pre-register by emailing [email protected].

The mural unveiling is scheduled for June 19 as part of town’s Juneteenth celebration in partnership with Concerned Parents of Color, WHAASCO, Noah Webster Library, West Hartford Arts Commission, and the Town of West Hartford.