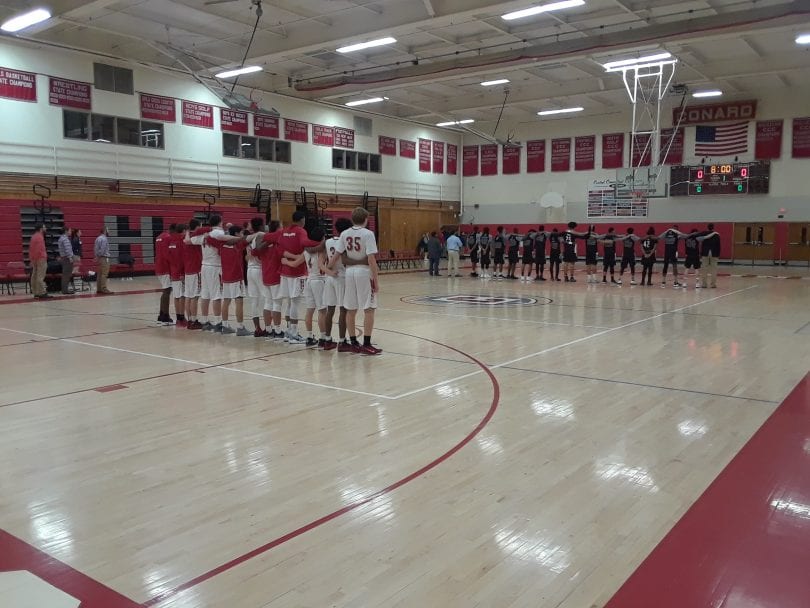 After a 1-5 start to the season, the Chieftains are “finally playing Conard basketball,” according to boys’ basketball head coach Jared Leghorn.

“In the beginning of the year, I said our style of basketball has to be half-court defense first,” said Leghorn. “For the first month or so – maybe too long – we really focused on defense and now the next step is we’re working on our offense. There’s moments where we’re really executing, but there’s also times where we’re rushing or not patient or forcing a pass, so we’ve got some areas to improve there, but I think we will. I think we’re gonna keep growing and keep getting better.”

The Chieftains won their fifth consecutive game and improved to 6-5 after a 50-33 win over the Academy of Science and Innovation at home in West Hartford on Tuesday night.

Both teams entered on a roll with win streaks of at least three games to their credit, but Conard prevailed to go a perfect 5-0 during its five-game homestand.

Surpassing the .500 mark for the first time this season, Leghorn said he is noticing the team’s confidence improve.

“After each win, it feels a little bit different, like we’re expecting to win and play well,” he said.

Defense was the key to success for Conard. The team produced stretches as long as nearly six minutes without allowing Innovation to score. While Linwood Hazelwood scored a game-high 20 points for the Ravens, Conard limited the rest of Innovation’s offense to just 13 points altogether.

The Chieftains struggled early and at times throughout the game offensively. Their scoring came in spurts during the contest, and it took until the second quarter – when Conard scored 19 points to take a 26-18 lead into halftime – to get going.

“I thought we did a good job of running initial offense and then what would happen is we’d get the ball into the paint or near the basket, we’d have two or three guys try to force up a shot rather than kicking it out to the open guy,” Leghorn said. “I thought we did a little better in the second half, but it’s still something we’ve gotta watch on film. We’ve gotta recognize when we’re double- or triple-teamed that someone else is open.”

Four players scored in double digits for Conard – Fair with 13, Casey Shane with 12, and Larry Womack Jr. and Josh Restrepo with 10 each.

The Chieftains will travel to Enfield High School (10-2) to take on the Eagles on Friday night at 6:45 p.m.