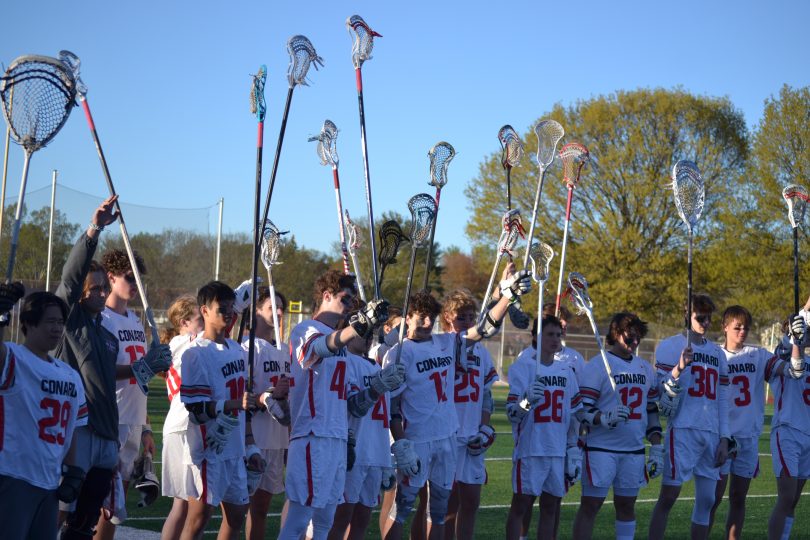 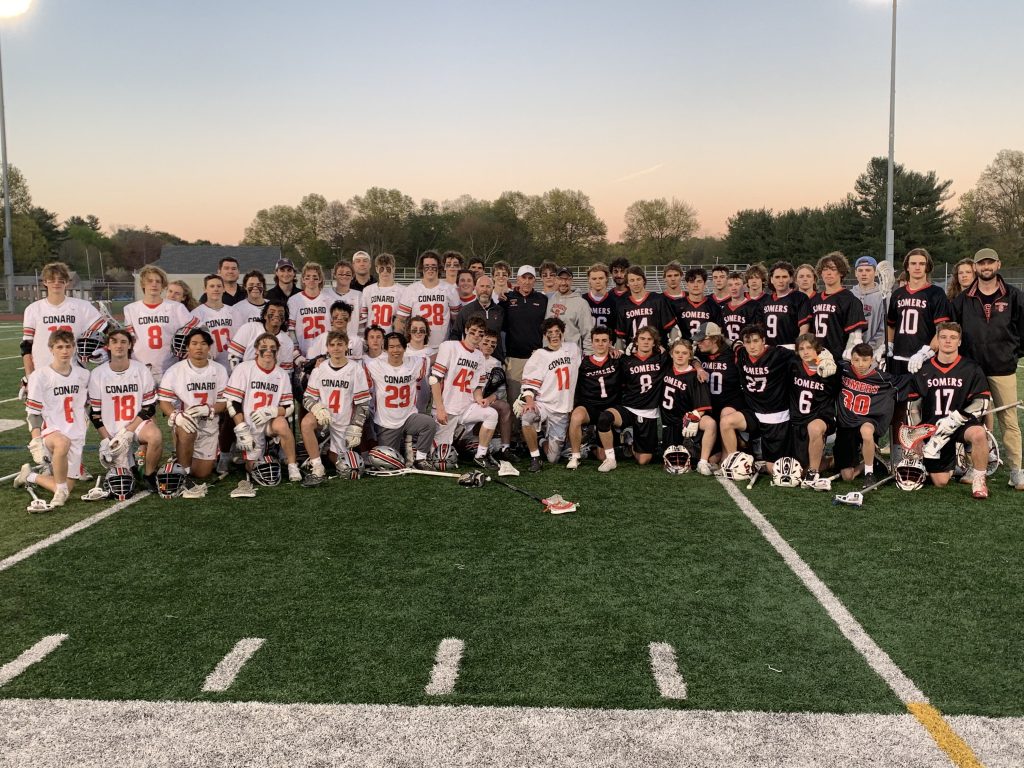 It was a night filled with tradition Tuesday at Conard’s McKee Stadium.

Longtime rival Somers (9-4) – one of the state’s top small school lacrosse programs – was the opponent. Former Conard head lacrosse coach, football coach, and teacher Bill Condon was being honored for all he has done for the players, school, and community. The moment was not lost on the players, coaches, or fans who were part of an exciting game that had a Hollywood ending for the Chieftains (7-6).

Conard head coach Matt Cersosimo put it this way after the thrilling 12-10 win. “It was an awesome night with coach Condon here. There is no one we have more respect for than coach McCarthy (of Somers) and his team.” 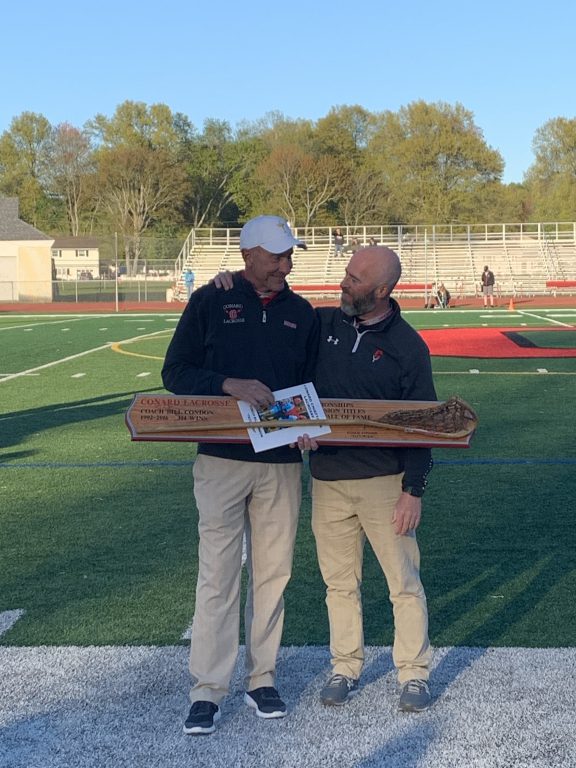 Condon – a long time teacher and coach – is retiring at the end of the school year. His lacrosse roots at Conard run deep. He was a player for the Chieftains as a student. In 1992, he returned to Conard as head coach of the program – a position he held for 24 years.

Under Condon, Conard’s boys lacrosse teams won 263 games and reached the state semifinals six times. A former Class M coach of the year and Connecticut High School Coach of the Year (2000), Condon’s teams recorded 341 wins. He was elected to the CT Lacrosse Hall Of Fame in 2015. With many of his former players in the stands, and others coaching for Conard this season, Condon was honored at halftime with a special presentation, and after the game in a sign of respect, both teams gathered to pose for a photo with Condon. 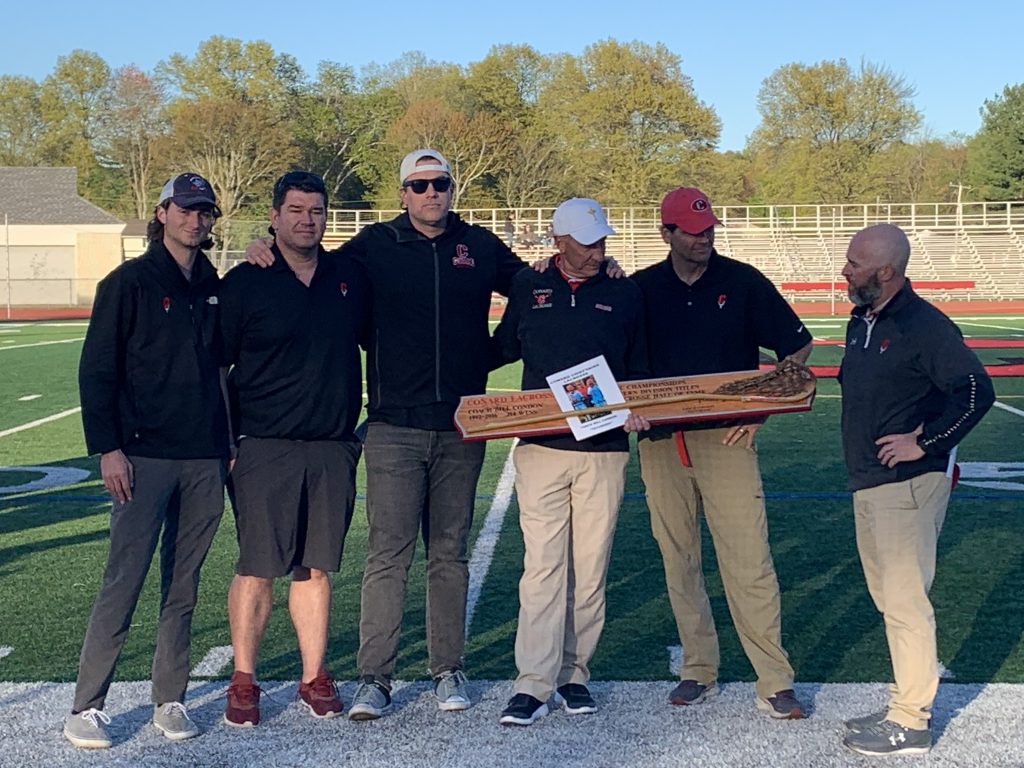 As for the game itself, it was a back-and-forth affair from the opening whistle with both teams taking turns building leads, only to see the other side retake the lead. The Sparts opened the scoring just 19 seconds into the game on Tait Gaudet’s goal, but Luke Shaffer evened things for Conard when he moved left to right and fired his shot for a goal. The Chieftains took the early lead  when senior attack Brayden Granger took a pass from behind the net and cut to the net and fired in the go-ahead  goal. Just over two minutes later, Cooper Barrett would score the first of his three goals in the game, and it was tied. 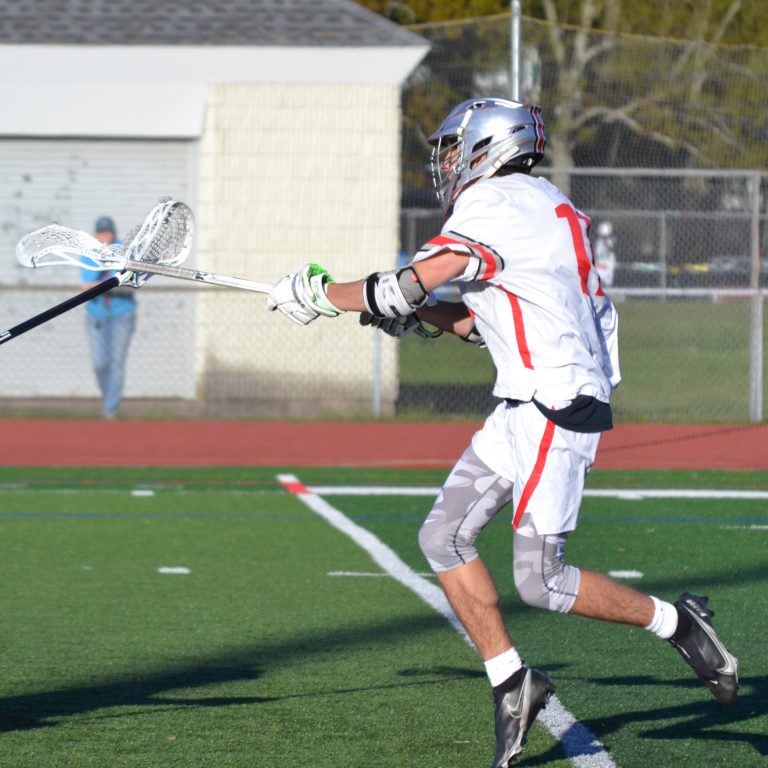 The lead could have been larger for Somers if not for the play of Conard goalie Trevor Dalton. From early on he was facing down the shots and keeping the ball out of the net. “Our defense did a good job keeping the shots on the outside,” said Dalton.

The defense led to offense and Conard took the lead with 3:08 to play in the first. Ben Halpert worked a give and go with Will Tousignant and it was 3-2. CJ Nelson would make it 4-2 with 1:10 remaining after a long outlet pass from Dalton setup the play.

In the second, Shaffer pushed the lead to three when he made a run from 30 yards out across the face of goal and scored. But moments later, with the momentum on their side, Conard turned the ball over, and Brian McGowan made them pay again as he raced in with the ball from midfield and scored. With the score at 5-4 with 5:45 to play in the period, it was the Chieftains defense once again setting up the offense. 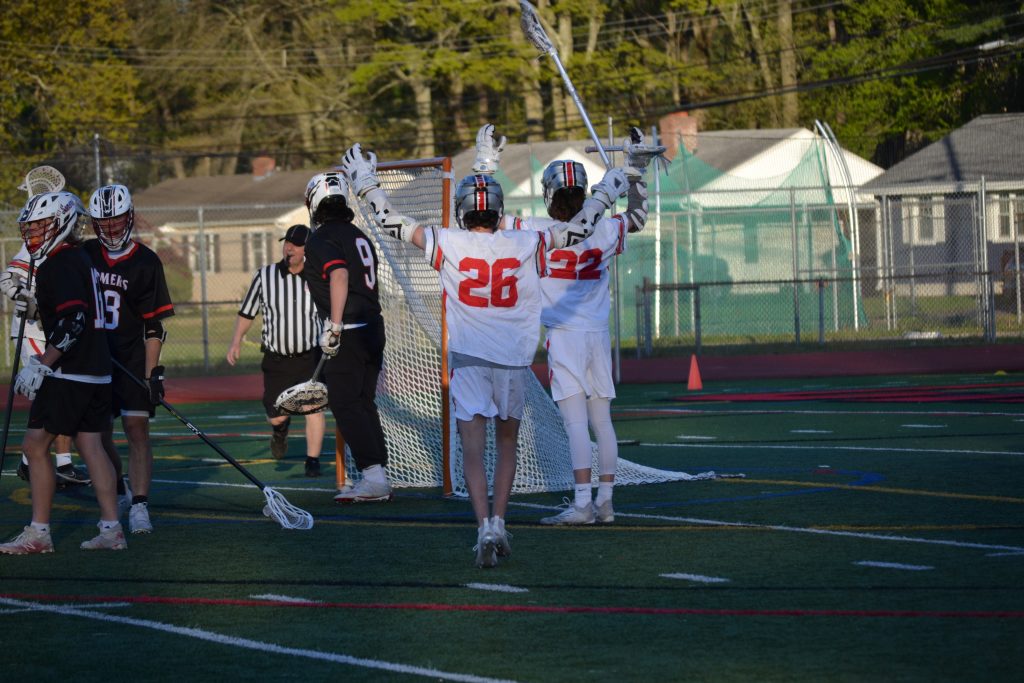 Harrison Sweeney – a defenseman – took a  clearing pass from Dalton, raced up the right sideline, cut into the center of the field about the 30-yard line and let go a laser that beat Somers goalie Liam Jones. “Sweeney just rips it,” said Dalton of his teammate’s shot. But Somers would run off four straight goals in two minutes and 15 seconds  to take the 8-6 lead into the break. Dalton had 10 first half saves as the hosts were outshot 23-15.

After the halftime ceremony honoring Condon, Conard came out energized and ready to play. Cersosimo called it “alum energy from the fans.” 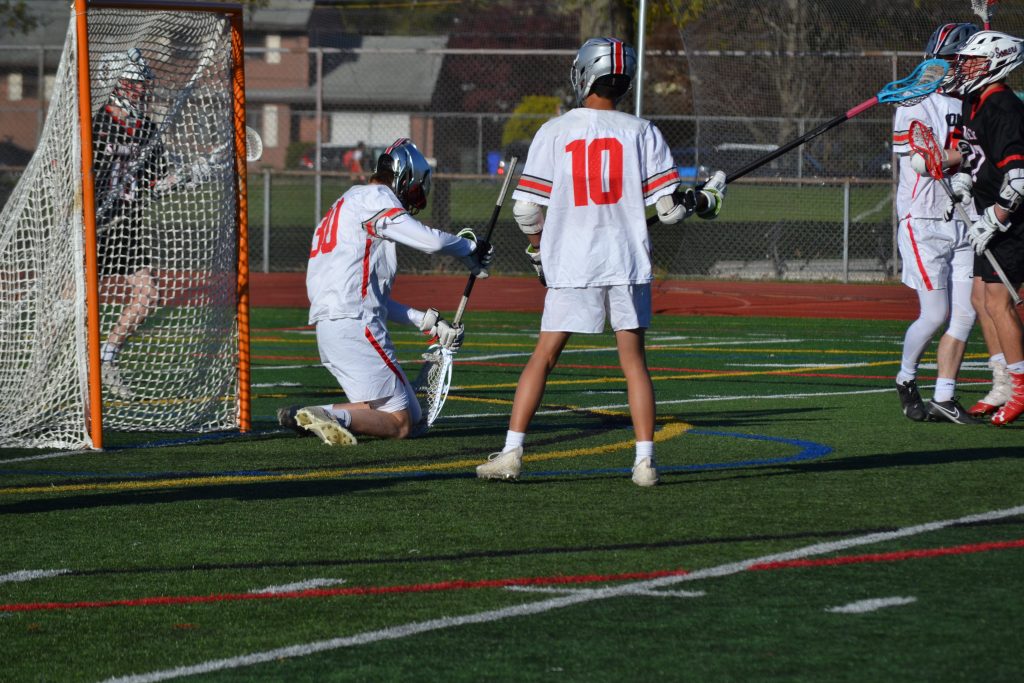 Goalie Trevor Dalton makes one of his 19 saves against Somers while teammate Robert Scanlon looks on. Conard vs. Somers boys lacrosse. May 10, 2022. Photo credit: Paul Palmer

Within three minutes, Conard had tied the game at 8. Dalton would make several strong saves to keep his team rolling, first on McGowan and then Connor Barrett. “Trevor really stepped up big in the second half for us,” said  his coach after the game.

At 6:32 in the third, Tousignant scored to give Conard the lead, and then Sweeney scored another goal that was almost a carbon copy of his first, and it was a 10-8 Conard lead. With goals coming from all positions, Somers could not adjust its defense to try and shutdown just one player. 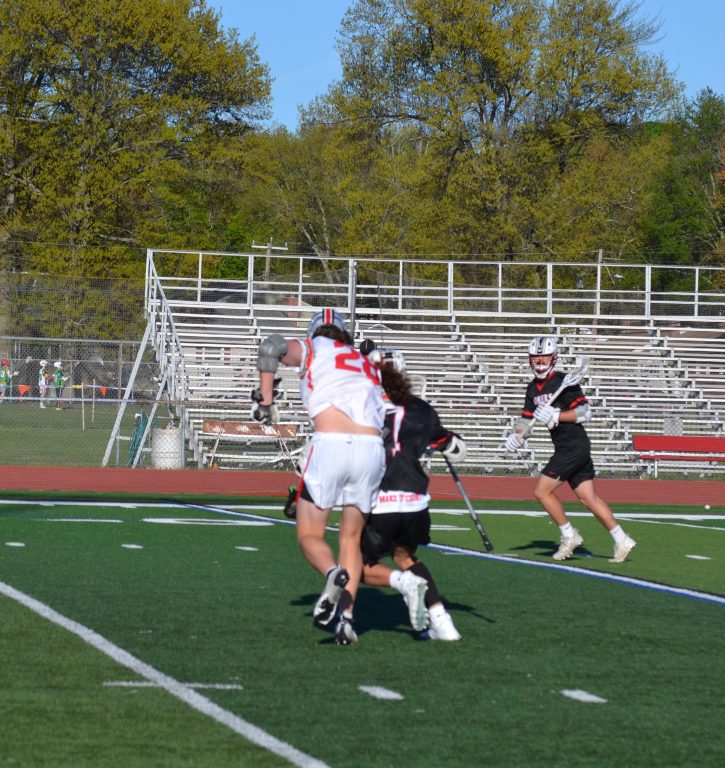 “We had good distribution on our goals and worked as one unit tonight,” Cersosimo said. “We finally put it all together.”

As the final 12 minutes began Conard held a 10-8 lead, but it never seemed to be comfortable for the hosts. They built the lead to 11-8, but Somers would score a pair in the span of two minutes and one second, and it was once again a one-goal game.

The highlight goal of the game came with 3:57 to play in he fourth. After Grainger’s shot was stopped, Shaffer beat the Somers goalie Jones to the loose ball and then fired a shot backwards over his shoulder into the net and fittingly that was the game’s final score. 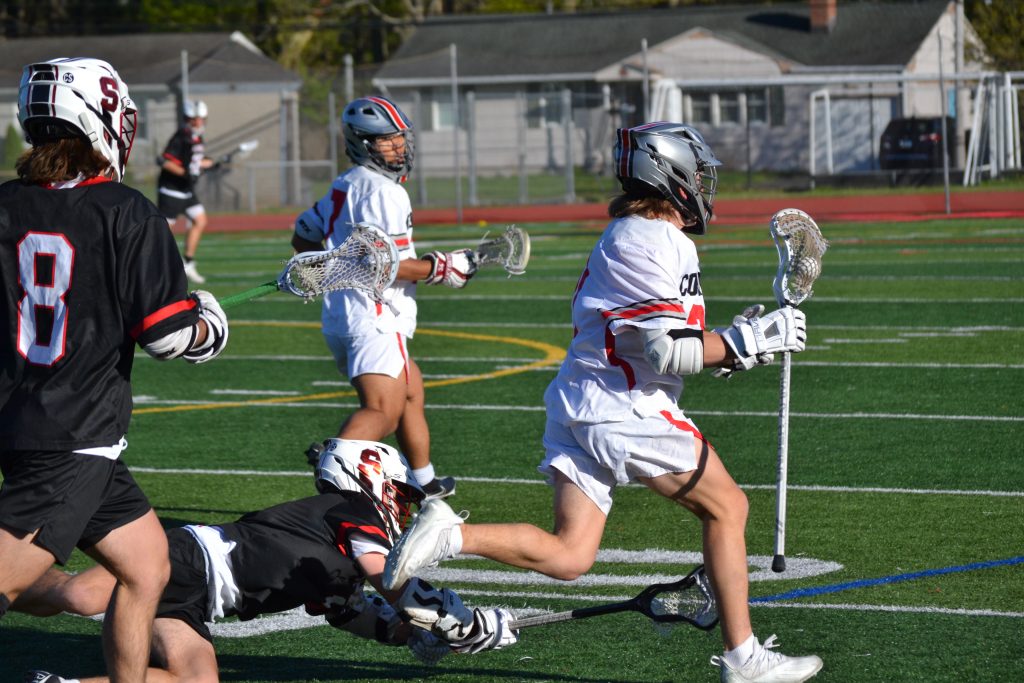 “We played probably our best game of the year tonight. It was a pretty special night and the win was the cherry on top,” Cersosimo said.

After the game, Coach Condon spoke to the Chieftain players. “It is tradition to honor the game,” he said. “Tonight, you played your butts off for a great win against a good team.” 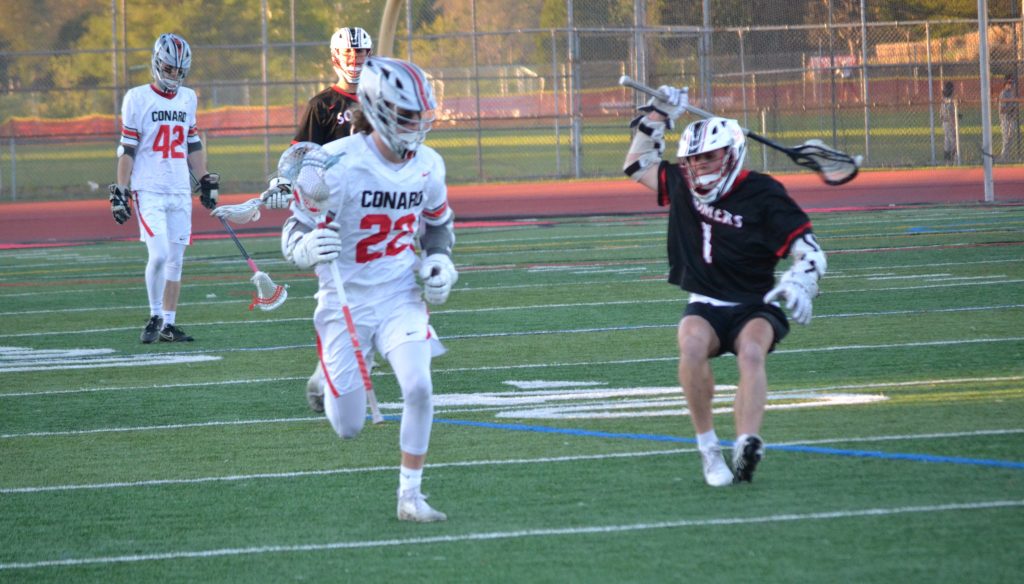 Conard’s Will Keever races away from Ryan Symington of Somers. Conard vs. Somers boys lacrosse. May 10, 2022. Photo credit: Paul Palmer