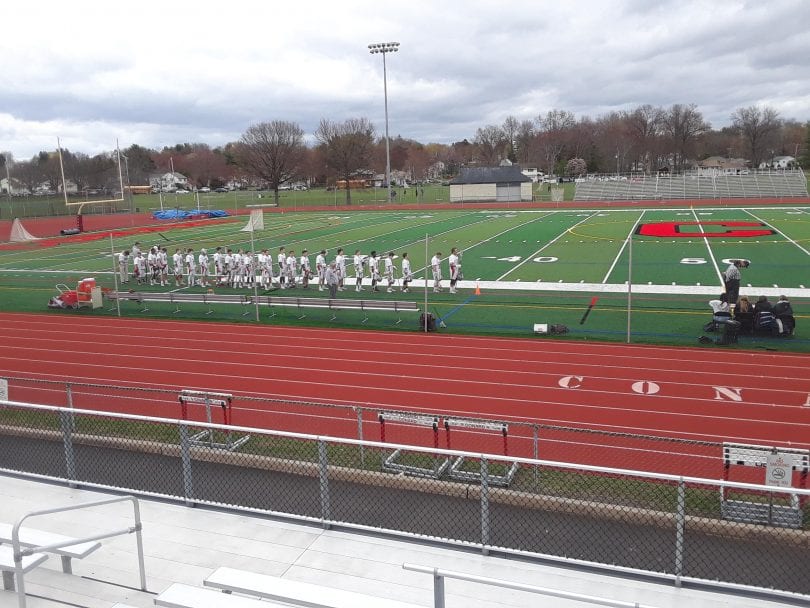 The Chieftains fought hard but saw the game slip away late against a strong Somers team.

The Conard High School boys’ lacrosse team dropped a 10-5 decision to Somers at home in West Hartford on Monday afternoon.

The Chieftains kept the game close until the fourth quarter, when the Spartans pulled away, scoring four goals in the last eight minutes of the contest to take a decisive 10-4 lead.

“Somers is a great team, and it’s a team we always look forward to playing, said Conard head coach Matt Cersosimo. “As we know, they’re a great challenge for us. They’re very similar to us in terms of being gritty and physical and tough, and they just outplayed us today.”

Avery Foye put the Spartans on the board first 41 seconds into the game. Mahon answered for Conard with 2:25 left in the opening period, but the Spartans tallied another goal with 1:34 on the clock to take a 2-1 lead after one.

Serdechny drew Conard within one, 3-2, with 4:36 remaining in the second, but Colin Whitford found the net for Somers 0.7 seconds before halftime, putting the Spartans up 4-2.

Grant O’Connor scored under two minutes into the third quarter, but Somers once again doubled up Conard with two goals to the Chieftains’ one, taking a 6-3 advantage into the fourth.

Hollerbach scored to bring Conard within two, 6-4, with 8:30 to play. Within 30 seconds, however, the Spartans answered and did not look back with four consecutive goals. Derek O’Connor joined his brother in the goal column and picked up his second point of the game with 1:33 remaining, bringing the score to 10-5.

“I thought once we started to get behind … we were pressing a little bit too much and not being patient,” said Cersosimo. “We try to be a very patient offense, and when we get behind, we get in trouble.”

Conard falls to 6-4 following the loss, as Somers improves to 9-1. The Chieftains will head to Avon (3-4) on Thursday to begin a four-game road swing before returning home to face Hall on Thursday, May 17 in their regular-season finale.

“We can still achieve all of our goals,” said Cersosimo. “All of our goals, they’re in front of us for us to go get. We gotta regroup, we gotta move forward, and we gotta look forward to our next opportunity … because we get really into the bulk of our CCC West schedule right now. No time to feel sorry for ourselves.”