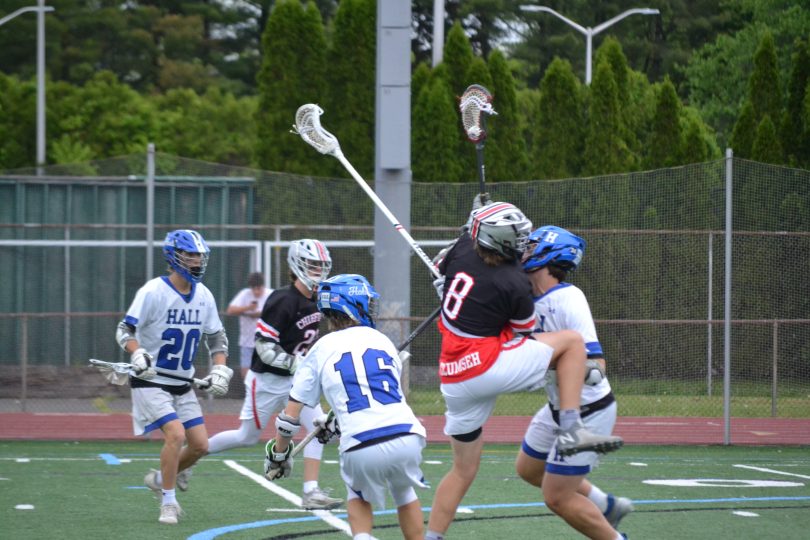 Ben Helpert of Conard scores after being the check of Hall's Ford Gillespie (16). Conard vs. Hall boys lacrosse. May 19, 2022. Photo credit: Paul Palmer 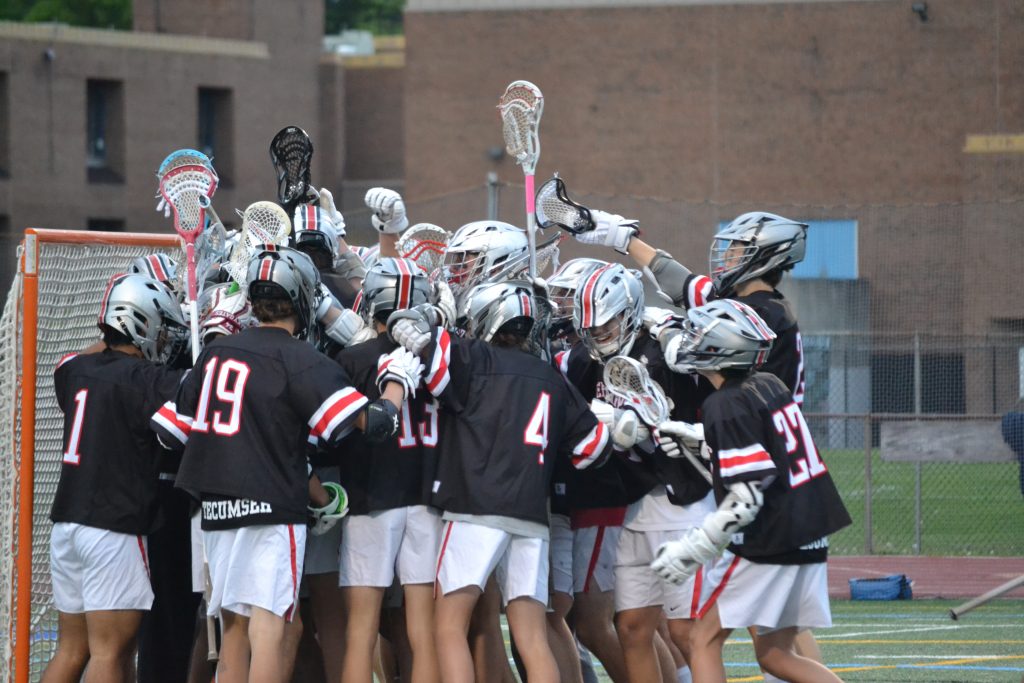 You can – as they say – throw out the records when Hall and Conard meet in any sport.

The Warriors came into Thursday’s game, which was the regular season finale for both teams, with an 8-7 mark. The Chieftains were at 7-8, and the seniors on the team had never beaten Hall. That all changed on an overcast day when Conard used its physical  play to beat its crosstown rival 8-6.

“Our four years, we’ve never beaten Hall,” said senior Will Tousignant. “I played against and on the same teams with a lot of those guys.”

“I feel great for our seniors,” said Conard coach Matt Cersosimo. “They left it all out there against a really good team, and your throw in the crosstown rivalry.” 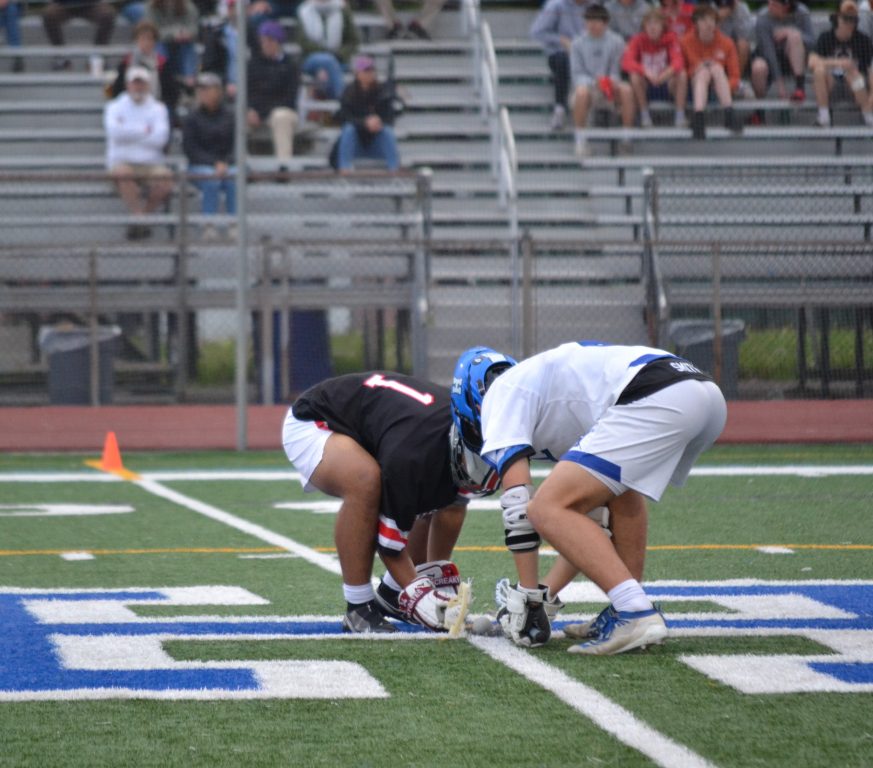 In what would be a low scoring game, Conard would get on the board first when Ben Halpert scored at 6:02 of the first. Hall had controlled the ball for a large part of the opening period but could not penetrate Conard’s tight defense to get a good shot off. That would be a major storyline in the game as the Chieftains’ defense kept Hall to the outside, forcing the Warriors to work the ball around to try and find a scoring opportunity.

“Fifty percent of it was us, and 50% was them playing a very sound ‘D,’ said Hall coach Jerimee Moses. The plan was for Conard to play the patient defensive game, and they executed it.

“We watched a lot of film,” said defenseman John Schulz. “You just have to trust in the guy next to ya and trust every man on the field.” 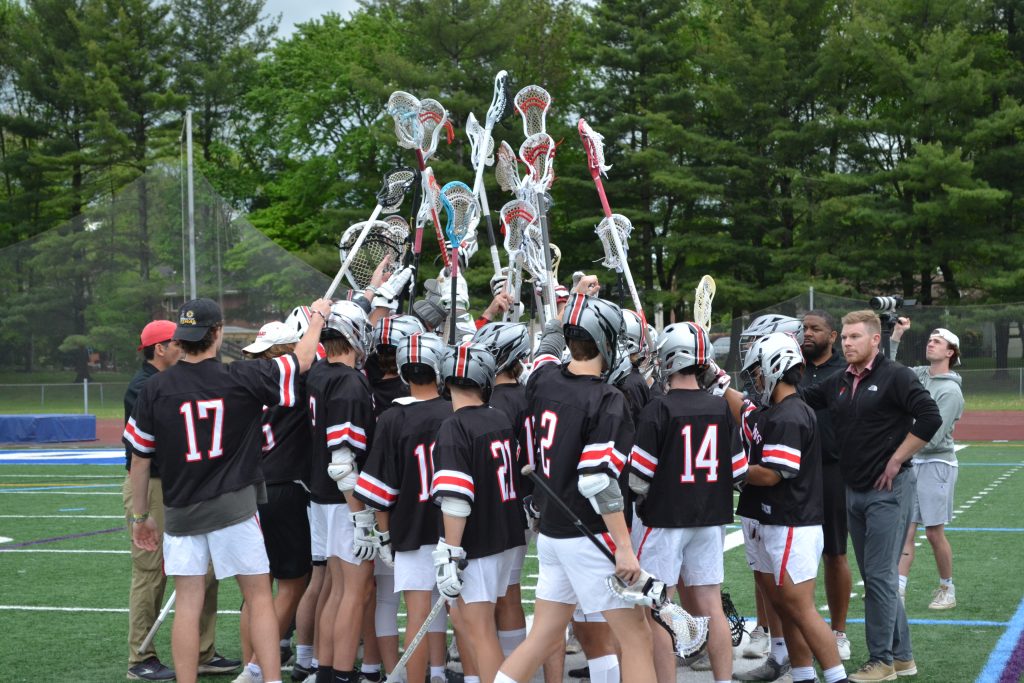 Hall would even the score about three minutes later when Grant Kanaga found Bode Smith with a pass  from behind the net, and Smith beat Conard goalie Trevor Dalton. The first would end tied at a goal apiece, but the host Warriors would convert on a man advantage early in the second when Logan Murphy buried a low, hard shot to make it 2-1.

Halpert would even things up with his second goal when he made a strong move to the net and his shot beat Jared Maidman. Off the ensuing faceoff, Murphy would win control of the ball, and after a long run at the Conard goal, he scored to make it 3-2. Maidman would stop a pair of good Conard scoring chances before Murphy would strike again. Moving left to right  across the goal face, he fired a shot back to the left that found the net. 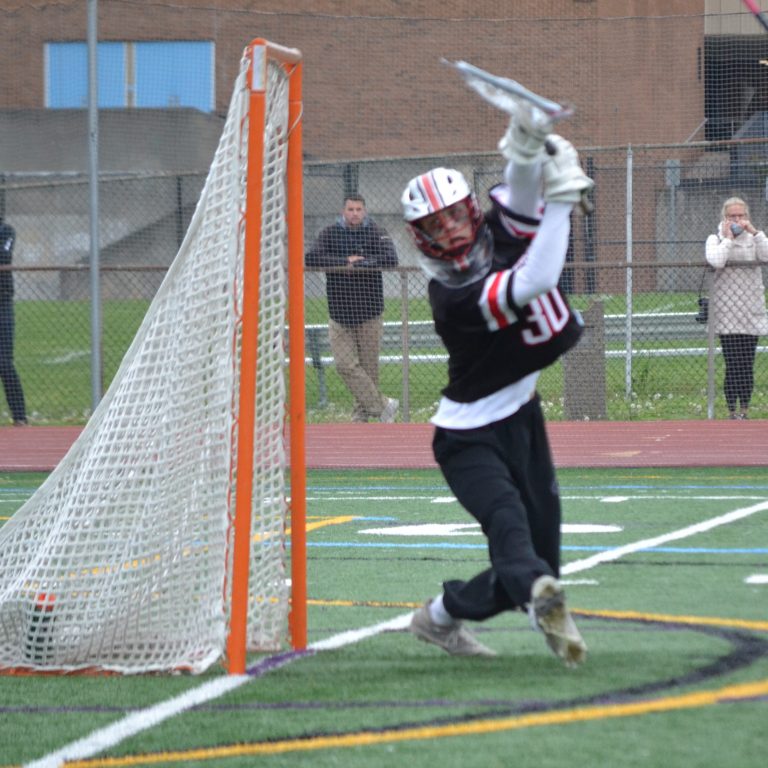 Goalie Trevor Dalton made 16 saves for Conard in the win over Hall. Conard vs. Hall boys lacrosse. May 19, 2022. Photo credit: Paul Palmer

Conard would then go on a run to close out the half  that saw the Chieftains seize the momentum and the lead. Senior Brayden Grainger scored to bring Conard to within a goal at 4-3. With 1:00 to go, Tousignant tied things up and  the Chieftains would take the lead with under four seconds to play. After knocking the ball loose from a Hall player, Conard set up behind the Hall net. With Halpert controlling the flow, he found Will Keever in front with just 3.7 seconds left in the first half and Conard was up 5-4.

The first half saw Conard play a more physical game than Hall, but the Warriors showed patience on offense. “We always want to be as physical as we can in all stages of the game,” Cersosimo said of his team.

As the second half started, it was Hall getting on the  board first. They controlled the ball from the opening faceoff, and 2:18 into the third, Murphy let a bad angle shot go that managed to squeeze between Dalton and the near post. That goal would tie the game and be the only scoring of the third period. 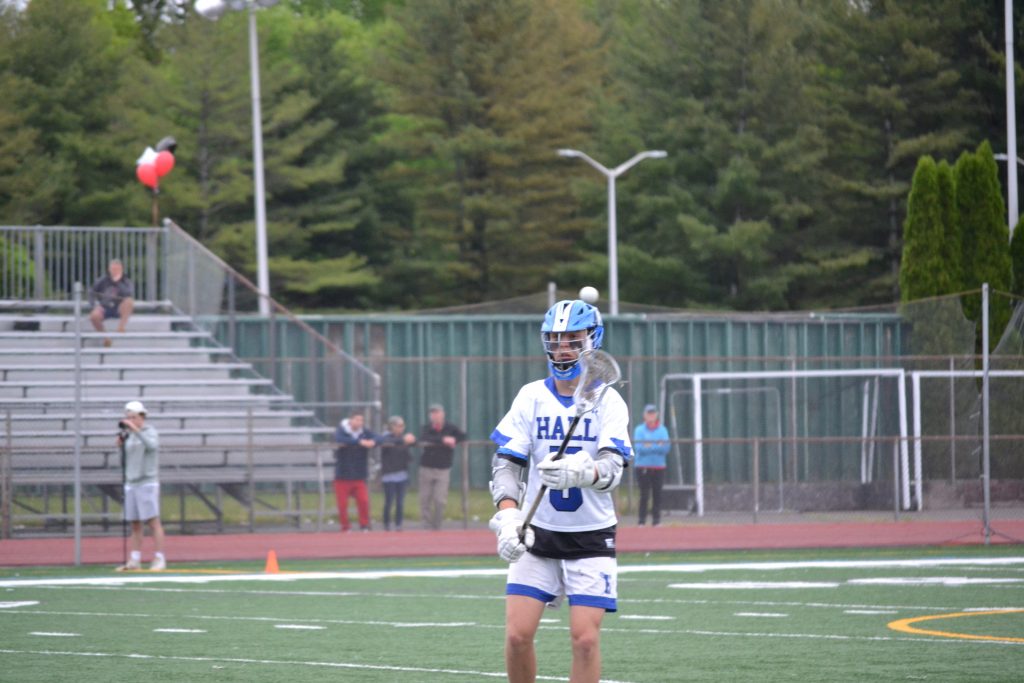 With the final 12 minutes of the regular season facing them, both teams geared up for the fight that was coming in the fourth quarter. The first break fell to Conard, when Hall went a man down just 1:46 into the fourth. Ten seconds later the Chieftains made them pay when senior Casden Parker would score on a hustle play. Conard’s initial shot was blocked by a Hall defender, and Parker found himself alone in front of the goal with the rebound and made no mistake to make it a 6-5 game.

Twenty-three seconds later, Conard would again score on a follow-up shot. After an initial save by Maidman, CJ Nelson scored on the rebound to give his team a 2-goal lead. “We’ve gotten incrementally better all year and this was our best performance all year,” Cersosimo said.

The teams would exchange goals in 30-second span and with just under 50 seconds to play, the tight defense of Conard forced Hall to make an errant pass with the ball going out of bounds, and the Chieftains would run down the clock and come away with the 8-6 win. 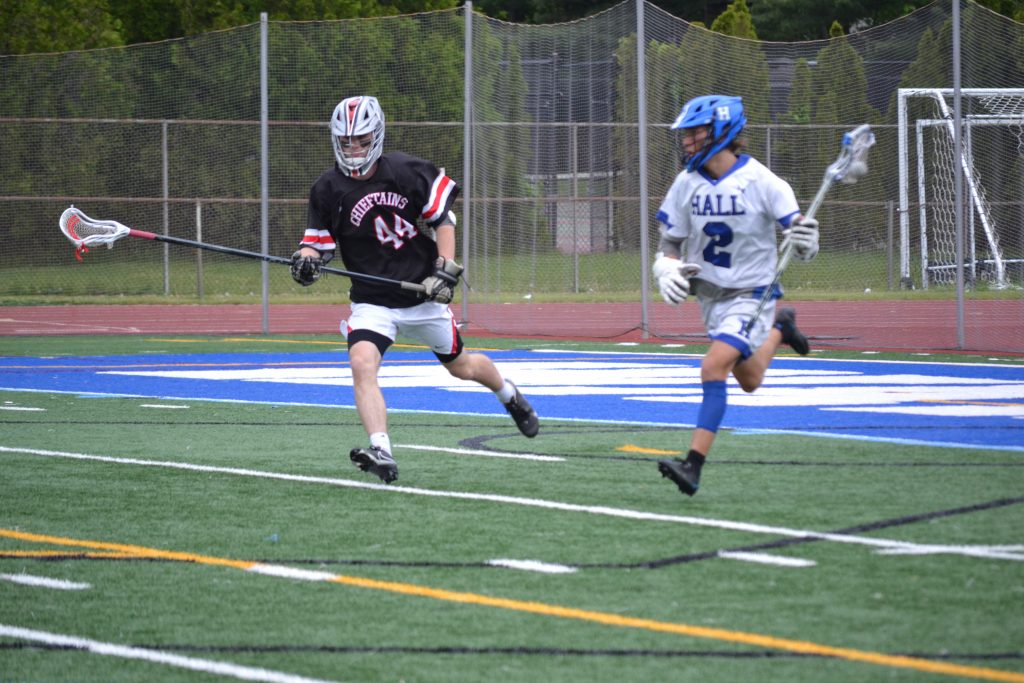 “We’ve had highs and lows all season,” said Tousignant. “We came out firing today and stayed composed.”

Despite the loss, Hall’s Moses says there is still a lot his team can accomplish as the post-season begins. “We had that conversation that this [game] is the one you wanted, but everything else is still on the table.”

For Cersosimo and his returning players, the 8-8 season and a trip to the playoffs makes a statement for a team that went just 2-14 one year ago. “They never stopped fighting all year,” he said. “I’ve loved the attitude since day one when we saw an opportunity to be an energy team.”

Tousignant and Schulz both know that the turnaround took time but was worth the effort. “From 2-14 to the states, I’m proud of that.” said Tousignant. Added Schulz, “Early on this year we were a little cocky, but we got humbled and it is great to be here now.”

Both teams will next play in the post-season tournament and will learn their opponents, game locations, and dates when the pairings come out next week. 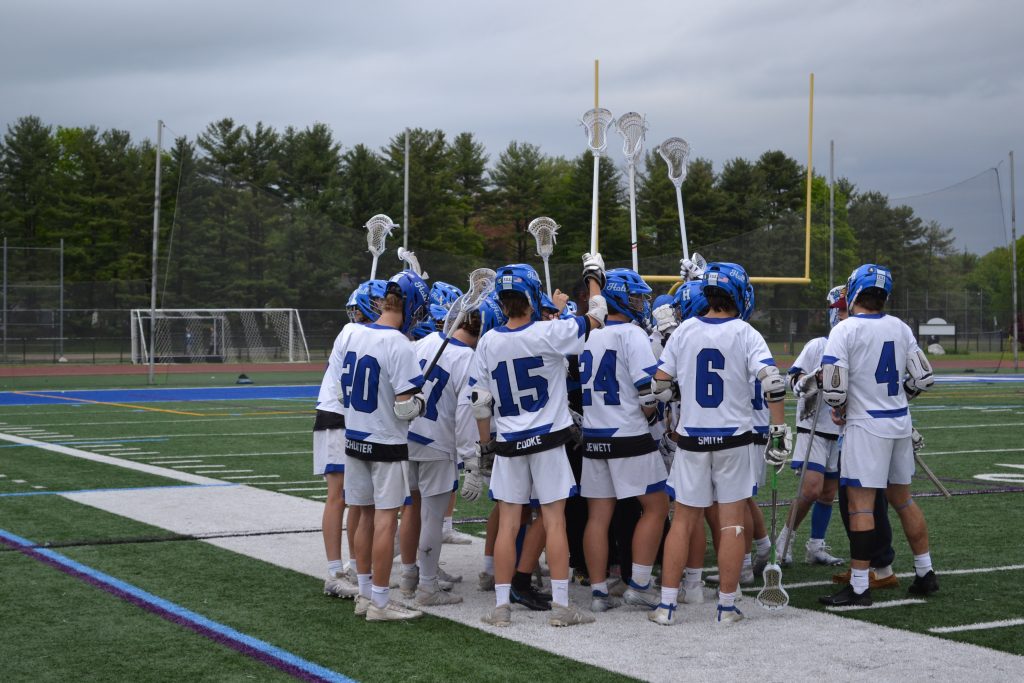 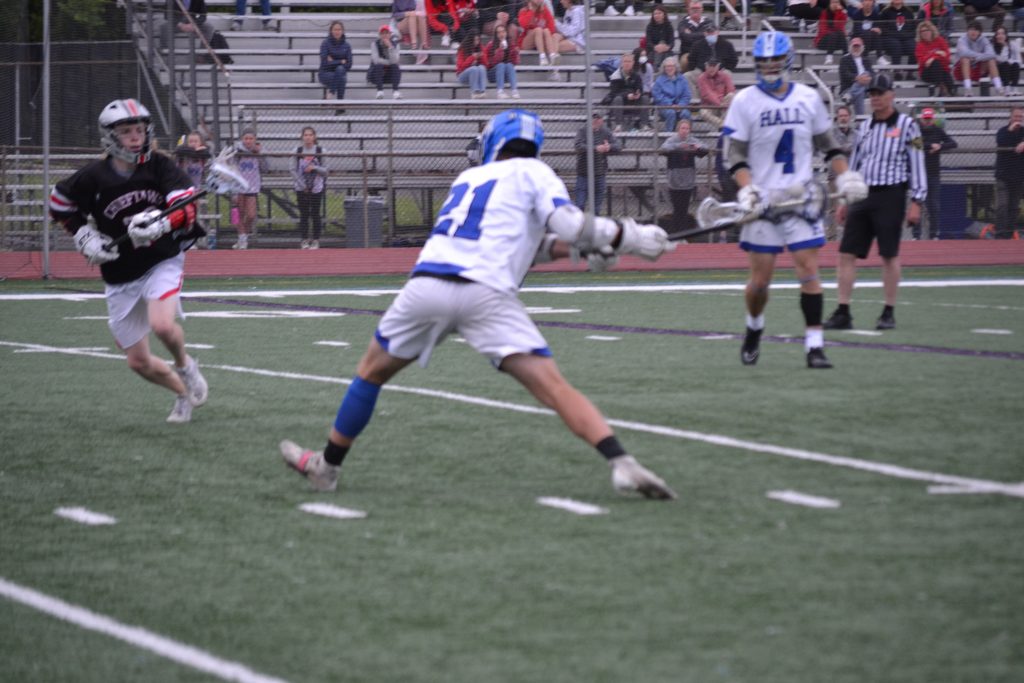 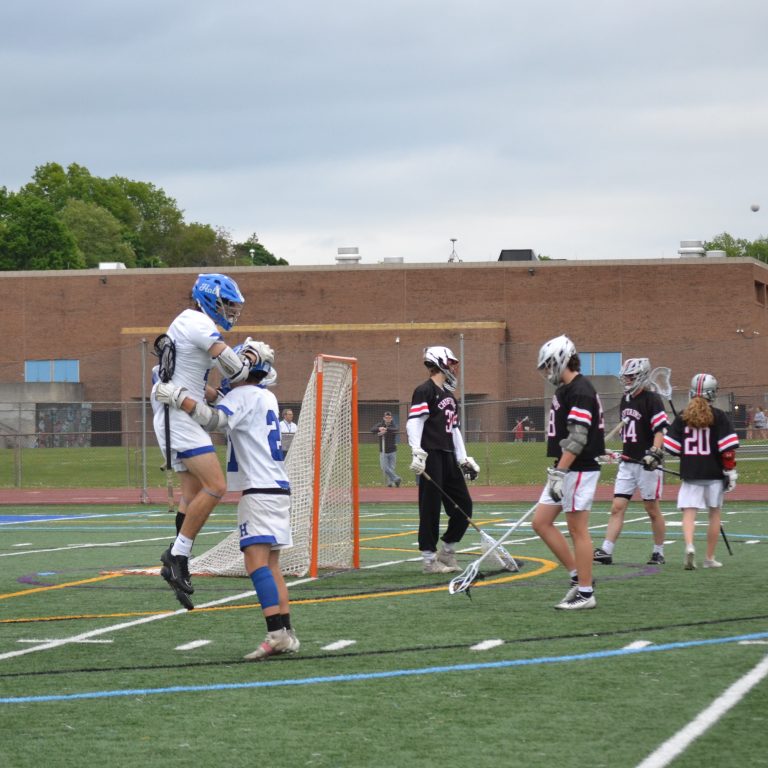 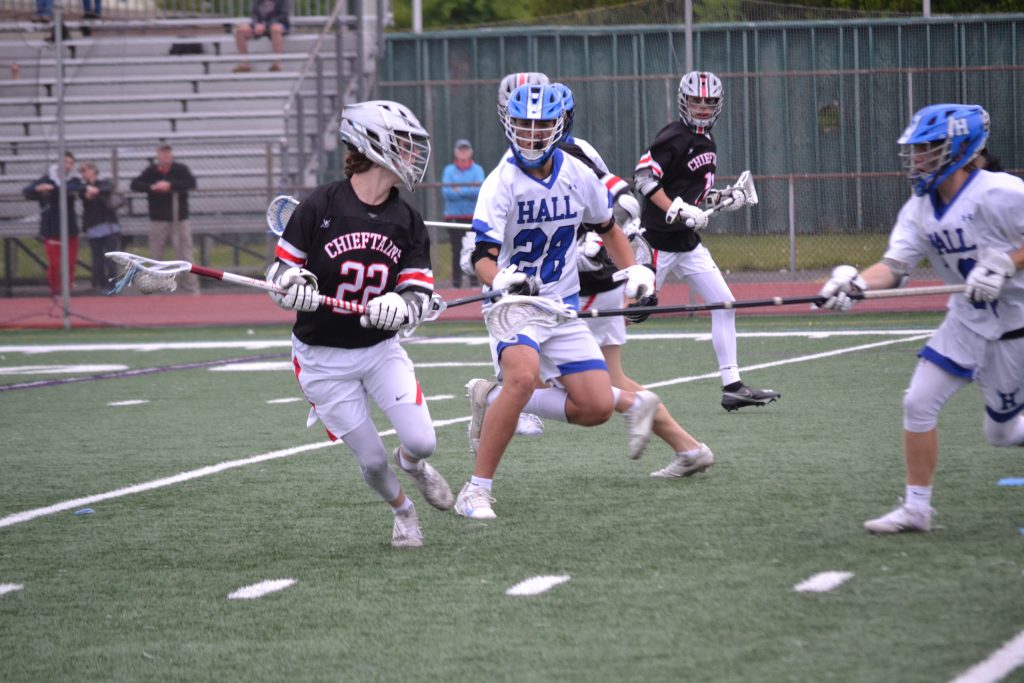 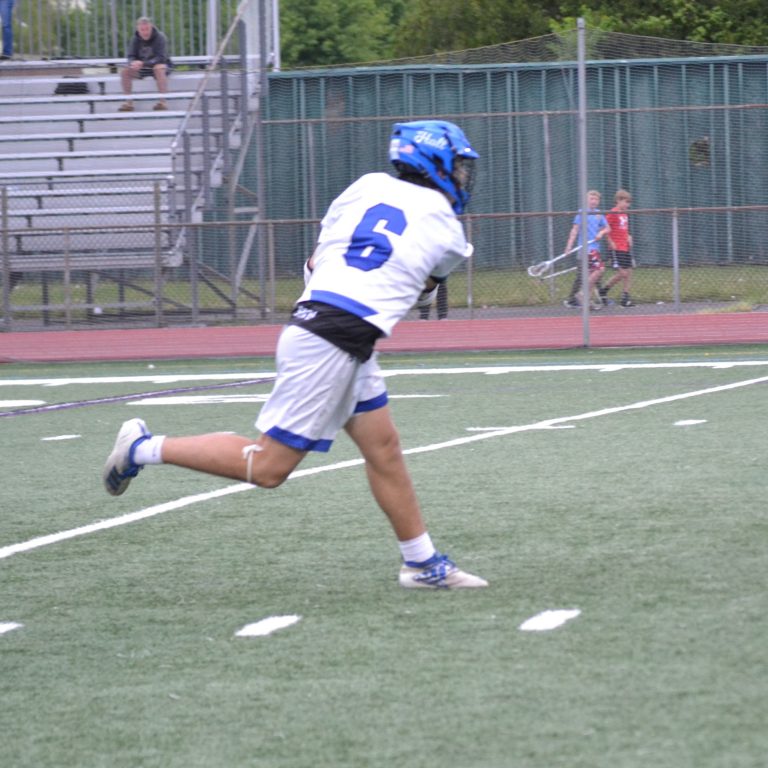 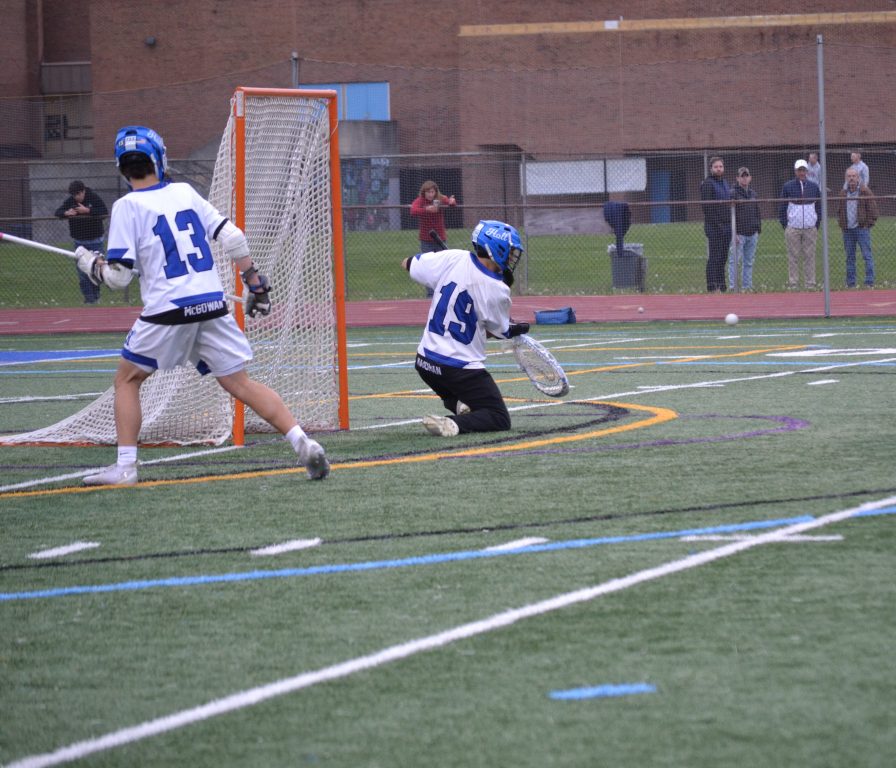 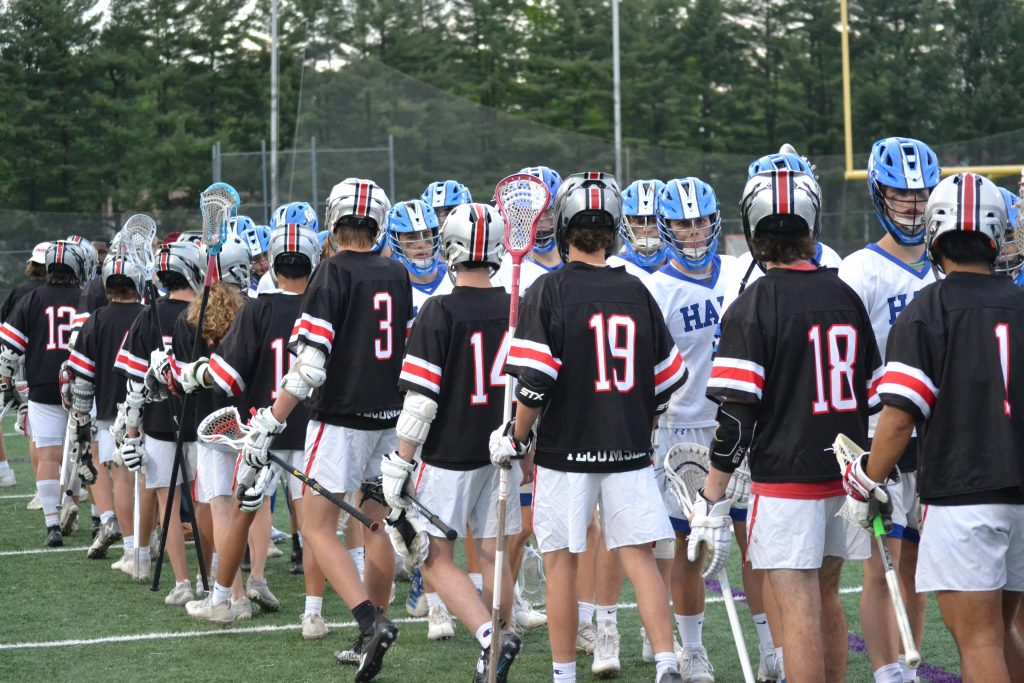