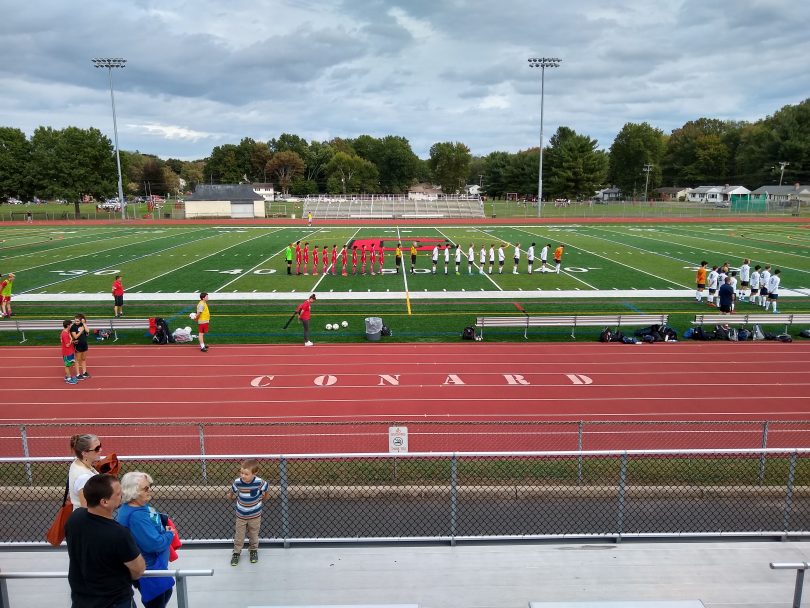 Conard sits at 2-2-2 on the season following the draw with Simsbury.

The Conard boys soccer team played to a 0-0 tie with Simsbury Wednesday afternoon at McKee Stadium in West Hartford.

Neither team found the net in 90 minutes of play as Conard head coach Adam Linker said scoring opportunities were hard to come by.

“I don’t think it was the prettiest game in the world,” said Linker. “It was a lot of kick and run. The weather started impacting everything with the wind definitely heading in one direction. It started raining, so the conditions impacted a lot of the game and it really took away from any kind of buildup.”

The Chieftains (2-2-2) dominated possession and created pressure for the first 20 minutes of the game, but the Trojans (3-1-2) pushed the offense in their favor for the latter part of the first half. Both teams had scoring opportunities in the second half but couldn’t convert.

Anthony Catanzaro put a shot on goal with 35 seconds left in regulation, but Ian Boudreau stopped it for Simsbury to extend the game.

At .500 through six games, the Chieftains are finding improvement to be a slow but steady process.

“One of our losses was a tight one against Farmington, which was a decent result. We played pretty well in that game,” Linker said. “First game, we kinda got caught. We ran against a hot forward who tore us apart. But so far, I think, right now, we’re slowly improving. We are extremely young. Some guys have been thrown into prominent roles because some juniors got hurt and right now, we are where we are.”

Among the underclassmen making an impact for the Chieftains, Linker touted his three freshmen – Kevin Rivas, Sami Dridi and Catanzaro – as key players moving forward.

“I see, honestly, the combination of the three because they all have three different strengths, and [they’ve] all been utilized in the game so far,” he said. “These are the three of the younger crew that are going to step up and become seasoned veterans as the year goes along.”