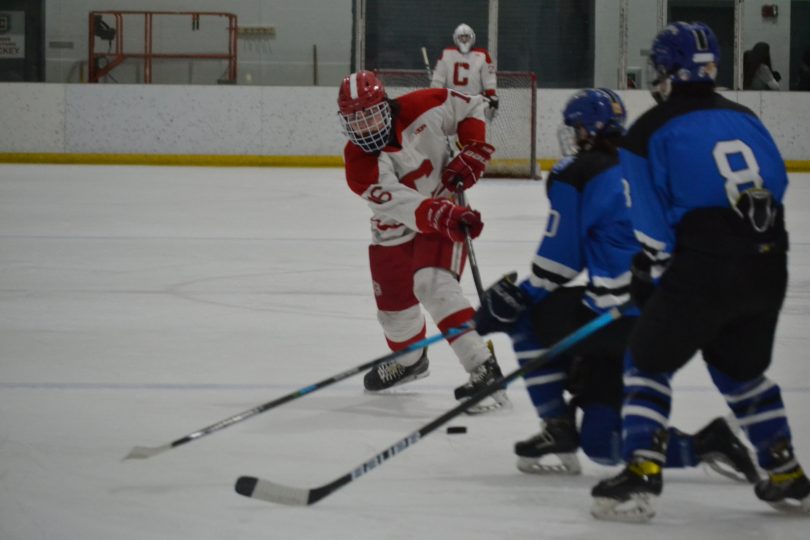 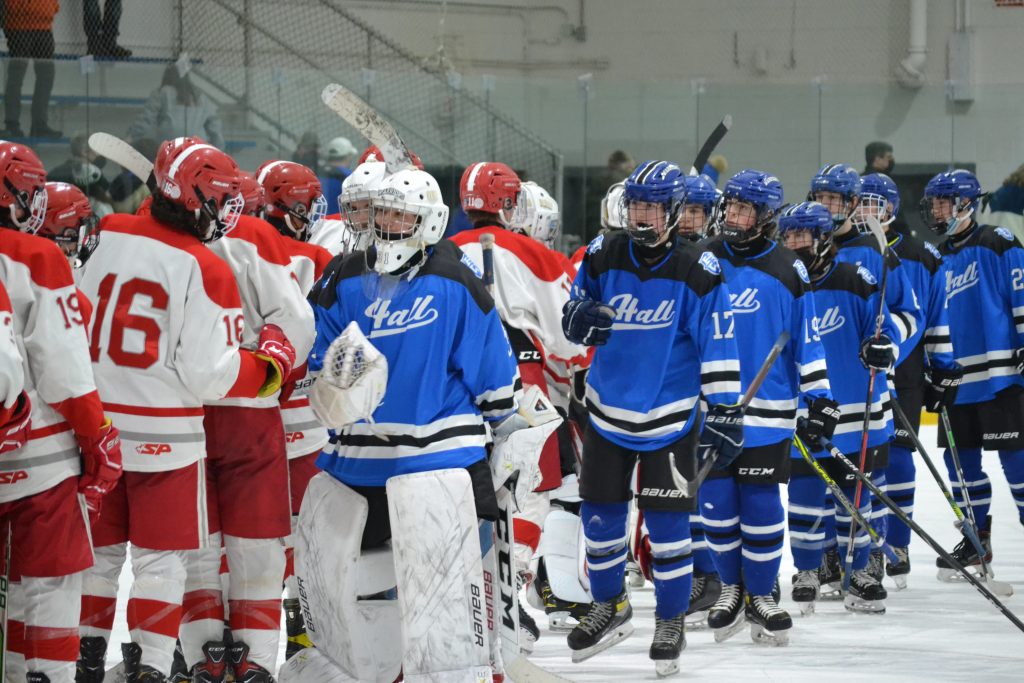 When you walked into Veterans Memorial Rink Tuesday, you just knew something was different. A full house of spectators – mostly student sections from both schools – were loud from before the opening faceoff. They even cheered for the officials when they took the ice before the start of the game.

Both teams had a lot at stake, in addition to bragging rights in West Hartford. Conard came in 4-8 on the season, losers of three in a row and in need of some wins to keep its tournament hopes alive. Hall is in a much better place for the post-season, but they were coming off a heartbreaking OT loss on Monday, and a 6-5 OT win on Saturday. 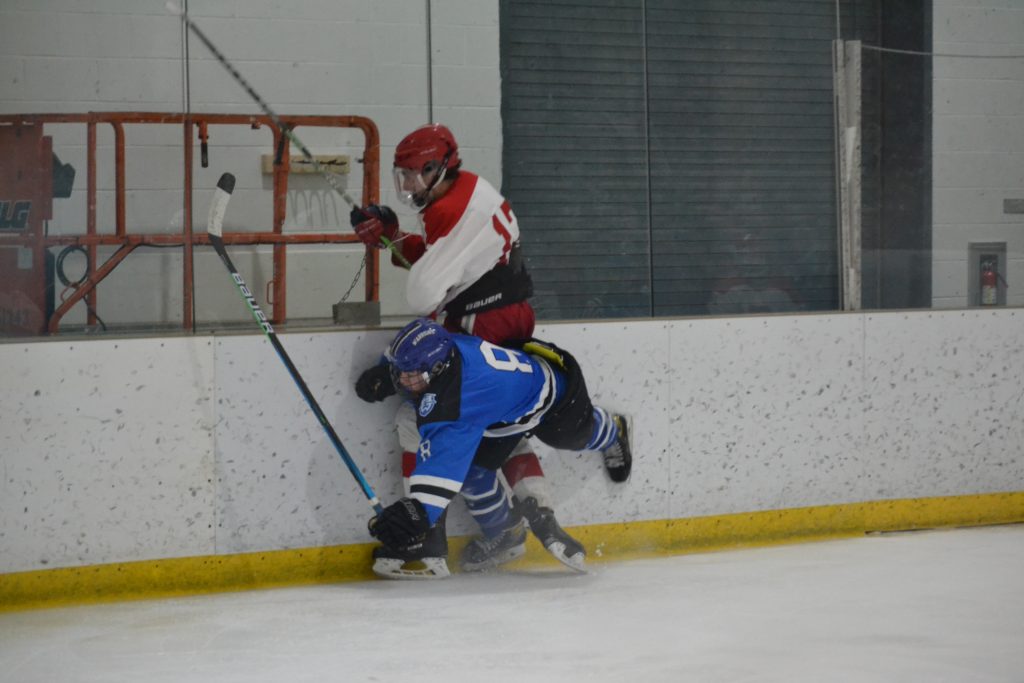 With the  building full of electricity, things got underway with Hall having the better of play before Conard turned things around. Five and a half minutes in, John Wenz’s pass in front was knocked in by Brian Fehl from a crowd of players and the Chieftains were up 1-0. They would get a chance to add to their lead  when Hall took  a hitting from behind penalty, but Hall held them off.

With 4:30 to play, Hall’s starting goalie Ethan DelGrego  made a big bad stop on Fehl’s bid for a second goal. Both sides were playing a physical game early on, with Conard’s Julian Schneider doing most of the thumping for the Chieftains.

Hall went on the power play with just under 2 minutes to play in the first, but senior goalie Graydon Selstad was solid in net, calmly turning away several good Warrior chances. Selstad credited his team’s early goal with helping him get ready. “These guys getting a quick goal helped me feel like I had more room,” he said. 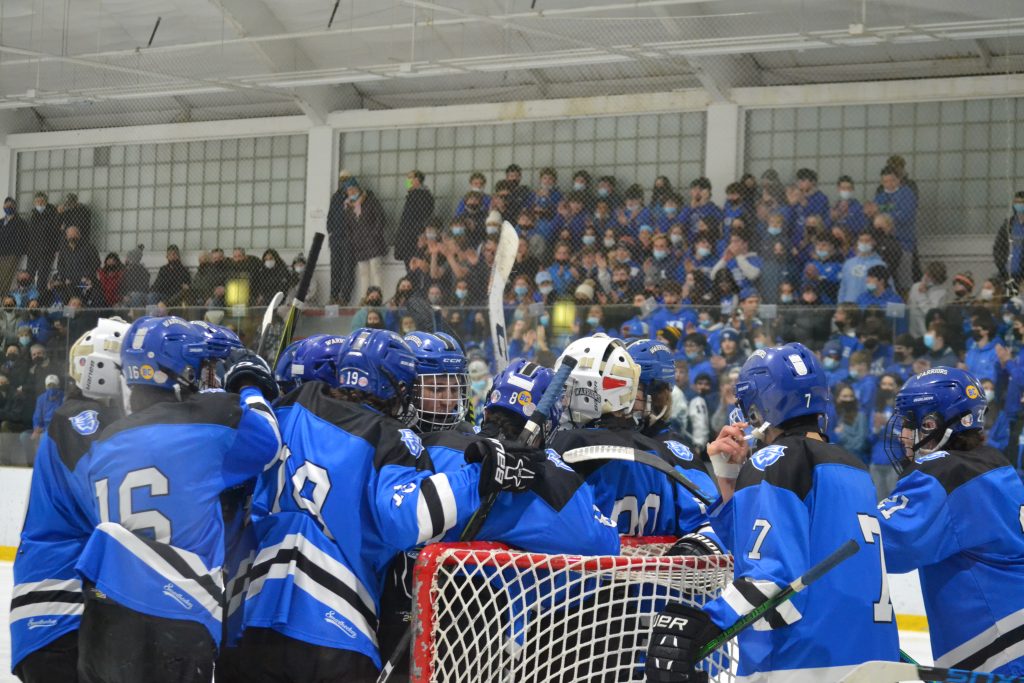 With the crowd still at full throat, the second period started. It was soon apparent that the back-to-back OT games were going to take a toll on the Hall players.

Four and a half minutes in, Harrsion Sweeney let a wrist shot go from along the right side that found its way past DelGrego. That set off a celebration of Conard players skating to where their student section was to celebrate. “We haven’t had fans like that in so long,” said Sweeney. “It was a real morale boost as it kept us going.”

Just 53 seconds later, Conard struck again as Jack Hodgson had a little puck luck to make it 3-0. A deflected pass went high in the air, and a Hall defender’s attempt to sweep it away as it landed failed, and Hodgson was there to bang it home. 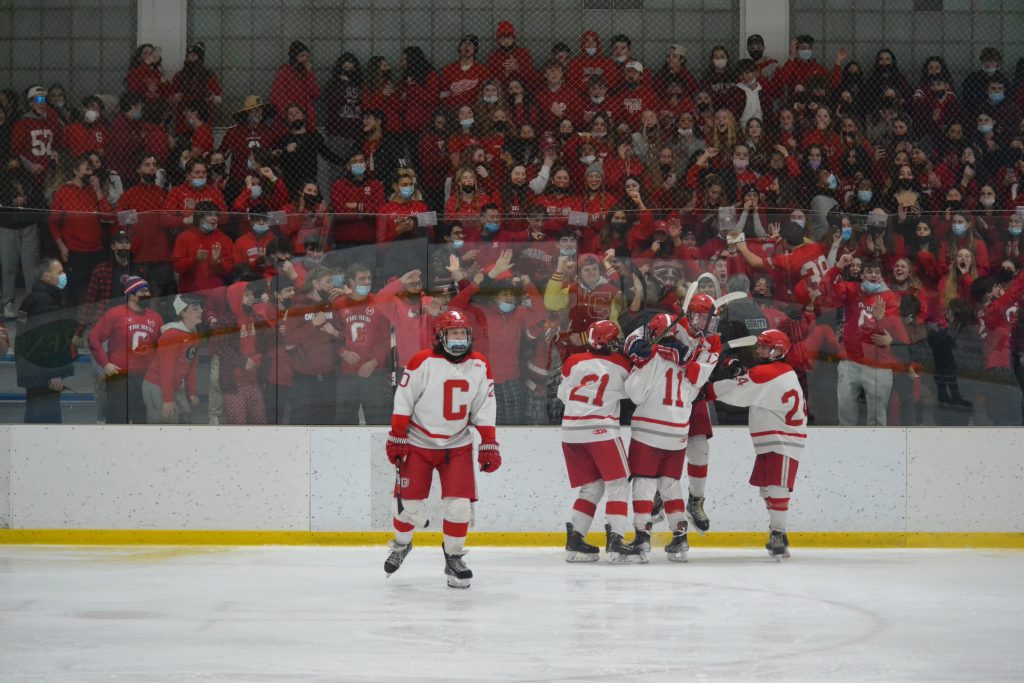 But Conard was not done yet. At 8:24, just over 2 minutes after the opening goal of the period, and just over a minute after the second tally, senior Beau Bacon found the back of the net and Hall coach Colin O’Connor had seen enough. He called a timeout to try and settle his players down.

“We simplified our game,” said Conard coach Jason Olson when asked about the barrage of goals by his team. “We played with confidence, skated well and put pucks on the net. They bought into it.”

But just about 2 minutes after the timeout, it was Conard scoring its fifth and final goal of the night when Bacon scored to chase DelGrego from the nets with 6:37 to play in the second. 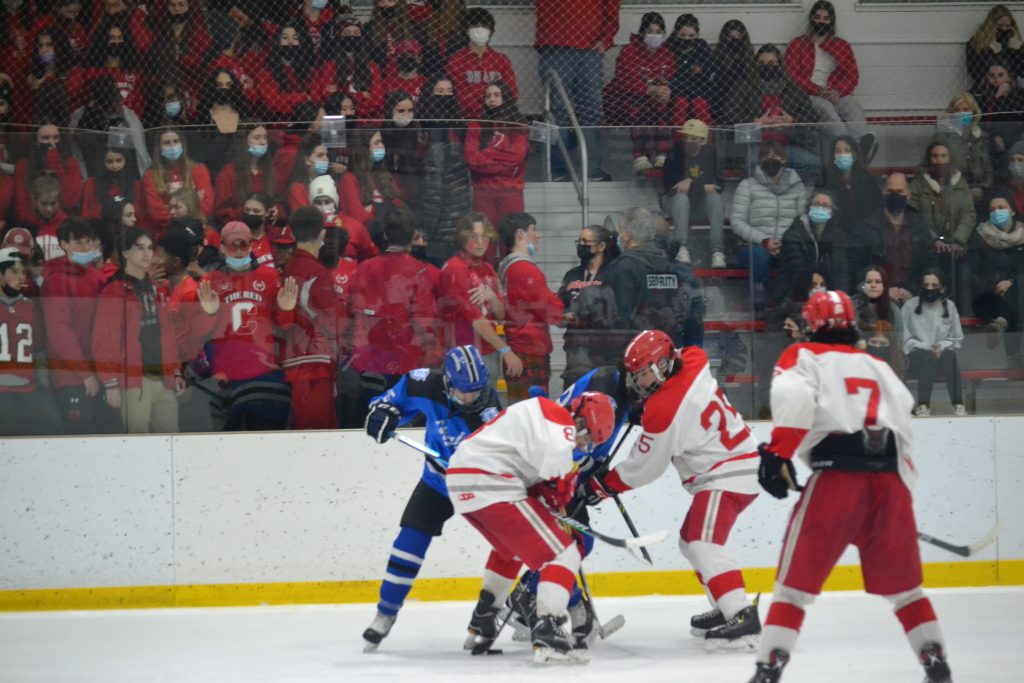 “We haven’t been on a good stretch lately,” said Selstad. “But this proves we can skate with and better than our competition.” Added his coach Olson, “They (Conard) had no choice but to get up for this one. I’ve never been so nervous before a game.”

The only remaining question seemed to be would Selstad and the Chieftains be able to preserve the shutout. Hall continued to press, but you could see the tired legs just leaving them a step behind their opponents. When they did get a good opportunity, Selstad was there to deny, including a strong glove save late in the period.

“Before a game I try to visualize what I’m gonna do,” said the senior netminder. “The first period we were a little rocky and I saw more pucks then.” 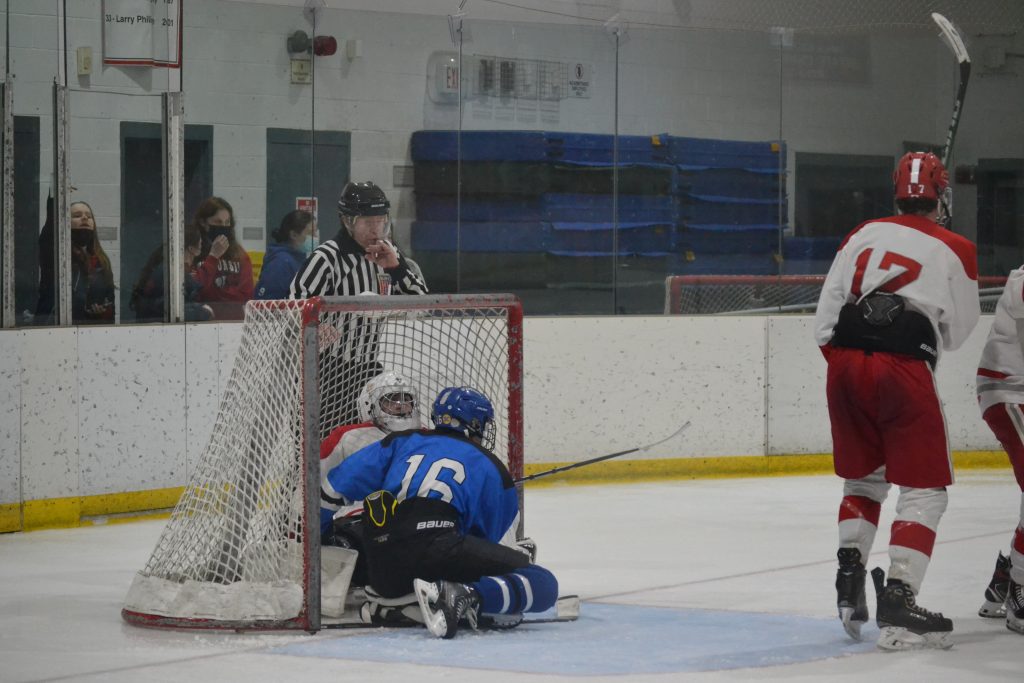 Both Sweeney and his coach knew how critical their goalie’s play was in the game. “He played awesome,” said Sweeney. “It could have been a whole different story without him.”

As for Olson, he and the team gave Selstad the game puck for his efforts. “He’s been excellent for us. He’s so calm and made some huge saves, especially in that first period,” said the coach.

The importance of the win for Conard going forward was not lost on players or coaches. “It shows who we are capable of being when we believe in ourselves and fight,” Olson said. “This shows how we can play as one,” added Sweeney. “ The ‘believe ball’ is rolling for us now,” he added. 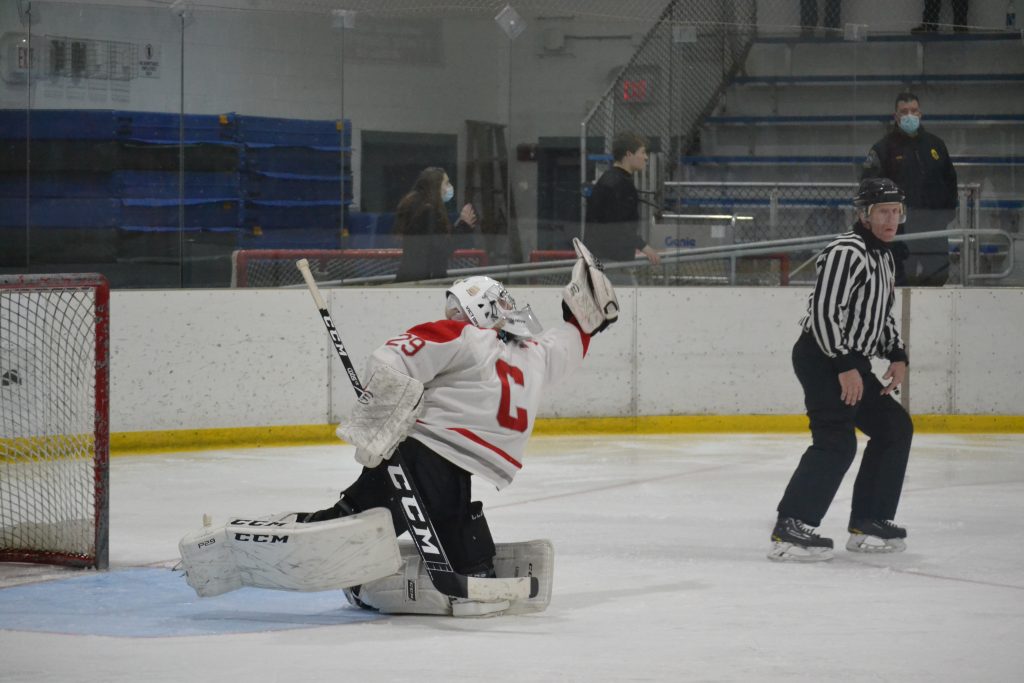 The Warriors will have a chance to rest and catch their breath before they return to the ice on Saturday. It marks the start of a two-game stretch where they will face the top team in DIII and the No. 3 team, before the rematch with Conard on Feb. 19.

The Chieftains have some critical games coming up, starting with game versus Northeastern on Wednesday, then Granby and Rocky Hill before the Hall rematch. All three of the teams they play before the 19th trail Conard in the standings and a sweep in those would all but assure them of a place in the post season tournament. 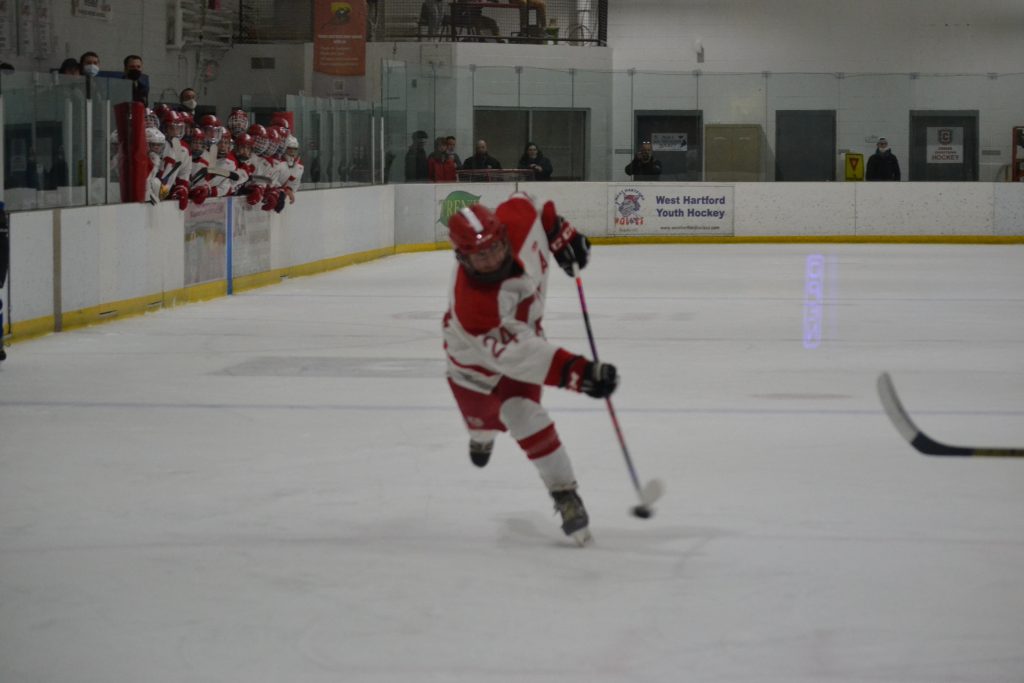 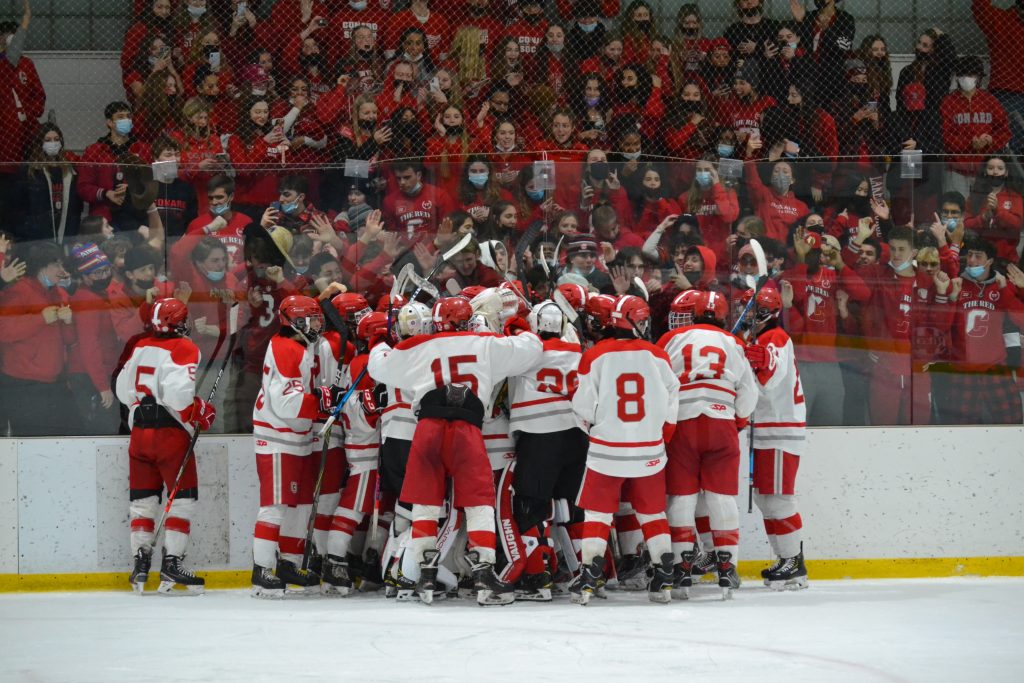