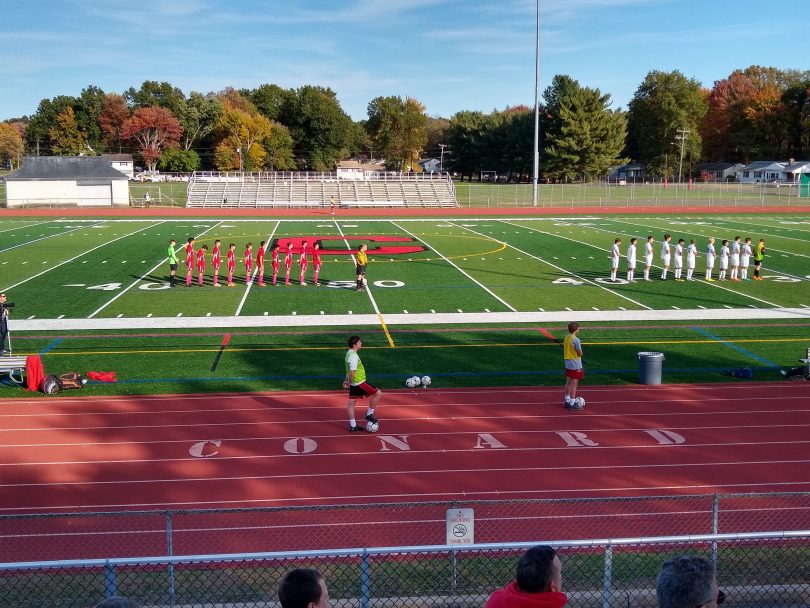 The Chieftains put together a five-goal performance and blanked the Eagles in a lopsided victory.

The Conard boys soccer team made the most of their scoring chances Tuesday afternoon against East Catholic.

Justin Rivas and Jude Sargent scored twice, while Anthony Catanzaro also found the net for the Chieftains in a 5-0 win over the Eagles (1-7-2) at McKee Stadium in West Hartford. Goalkeepers Baden Krisst and Garrett Brown each played a half in the combined shutout.

Head coach Adam Linker said he was impressed with the Chieftains’ offensive performance. Conard (5-3-2) tied its season-high five goals scored set in a 5-1 win at RHAM on Sept. 17.

“We showed a little bit more energy and life offensively, and we were able to penetrate on the sides and crash the goal mouth area and be in the right position, so today was a positive day for us offensively,” said Linker. “We definitely capitalized on all of our chances, [which] I’m very excited and proud about.”

Rivas scored first – assisted by Sam Musto – to put Conard ahead 1-0 just under 10 minutes into the first half. Catanzaro chipped the ball over the Eagles goalie into the net off a pass from Allen with 18:21 to play in the half.

Catanzaro assisted on Rivas’ second goal as multiple Chieftains crashed the East Catholic net at the 13:17 mark. Seven minutes later, Sargent found the net on a header just inside the right post to give Conard a 4-0 lead into the intermission.

Sargent scored again three minutes into the second half, finishing a chance in the box off a corner kick.

With a young lineup routinely starting three freshmen and three sophomores, Linker said the captains and upperclassmen have played an integral role in developing the confidence of the younger players.

“What I love to see is the fact that they’ve been nurtured and they’ve been accepted so much so on this team that you’re seeing them blossom a little bit,” he said. “Anthony Catanzaro, he’s exploding. He’s playing with confidence. … It’s because the upperclassmen have encouraged him and are getting him going and they’re having him feel comfortable and accepted.

“These guys, they’re not selfish. … They know that we need our younger guys to grow up really quickly.”

Sargent said his role as a junior captain on the team has been a pivotal experience for the underclassmen and himself.

“It’s a challenge,” he said. “They’re learning, and I’m learning as a captain as well. … Really, just leading the kids is setting an example for them. Show them what you can do on the field and they’ll follow.”

Sargent said, meanwhile, that the team has continued to improve throughout the season.

“The first half of the season, we started out a little slow and Coach Linker has been on us to step it up, and we’re really amping it up now,” he said. “Everyone’s fired up. We’re just taking off right now.”

Conard continues its season on the road against Avon (3-5-2) Friday afternoon.