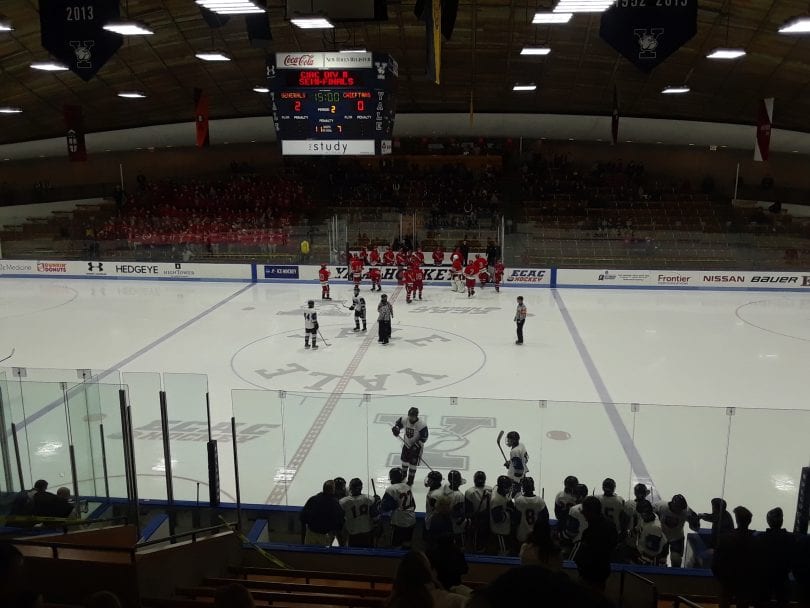 Conard falls one game short of returning to Ingalls Rink to play for a state title.

The Chieftains’ effort to bring a state title to West Hartford came up short in a 4-1 loss to Farmington Valley in the CIAC Division II boys ice hockey tournament semifinals on Monday night at Ingalls Rink in New Haven.

The Chieftains finish the year 13-10-1 overall, concluding what Conard head coach Chris Tornaquindici said was a successful season in his first year at the helm.

“We accomplished a lot,” said Tornaquindici. “We were underdogs almost every night coming out. Our guys worked harder than any other team to be successful all year, and that’s what I preached in the beginning of the year: ‘If you work hard, you can be successful.’ This is no sharp stick in the eye. We just lost to a really good hockey team. I’m very proud of my guys, and I know my guys are very proud of themselves.”

Conard was outshot 48-13 in the contest as the Generals showed why they were the No. 1 seed in the bracket by dominating in puck possession, scoring chances, and – most importantly – on the scoreboard. Junior netminder Shea Henderson made 44 saves to keep the Chieftains in the game, denying multiple point-blank and rebound opportunities in front of the net.

“Shea will be the focal point of our team next year,” said Tornaquindici. “We are gonna try like hell to find a way to generate some more offense for this guy because we can’t expect Shea to have a one- or two-goal game every game, and that’s what he’s done. He’s put this team on his shoulders. We’re glad – really glad – to be having him back.”

Monday’s contest marked the third matchup between the Chieftains and the Generals this year. Farmington Valley sweeps the season series with the win and advances to face Guilford in the state championship game on Friday night.

Tim Arena contributed to all four Farmington Valley goals with a hat trick and an assist on the night.

Owen Lacourciere scored first to give Farmington Valley a 1-0 lead with 7:17 to play in the first period. Arena capitalized on a turnover at Conard’s blue line for an unassisted shorthanded goal with 58 seconds remaining to put the Generals up 2-0.

Arena added to the Farmington Valley lead on a 3-on-2 rush with 12:56 remaining in the second period to put the Generals up 3-0.

Brent Soucy put Conard on the board and cut the deficit to 3-1 on a power-play goal from the blue line with 5:08 left in the middle frame, giving the Chieftains some life offensively. The spark did not linger into the third period, however, as only two of Conard’s 13 shots came in the final 15 minutes of play.

Farmington Valley sealed the victory with Arena’s hat-trick goal, a rebound from the right side of the crease, to extend the Generals’ lead to 4-1 with 8:25 remaining in the third period.

Conard killed all three of its penalties in the game, while Farmington Valley went 1-for-2 on the penalty kill.

The Chieftains’ loss marks the end of the careers for the team’s six seniors: Jack Starr, Brent Soucy, Paul Wilson, Owen Hyland, Ramsey Henderson, and Tanner Bruttomesso. Tornaquinidici lauded their contributions to the program after their final game.

“You always [remember] your first,” he said. “Your first girlfriend. Your first job. Your first car. This is my first team being a head coach of the same school that I went [to], and I will never forget this senior class. They did everything I asked them to do – every shift, every practice – and I’m gonna miss ‘em like hell. They are a tremendous group of kids. I wish them the best of luck in the future, and I hope they come back and see us often.”