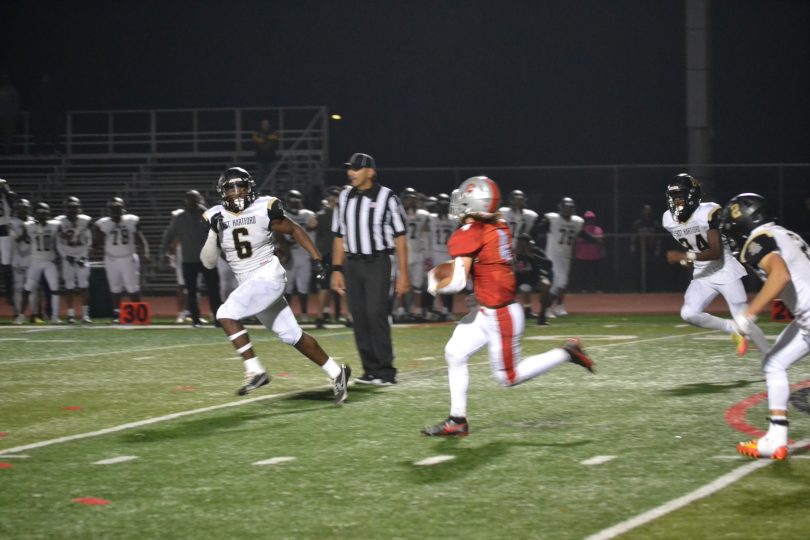 The Red Wolves hosted the Hornets in West Hartford Friday night, coming up with a 31-28 win. 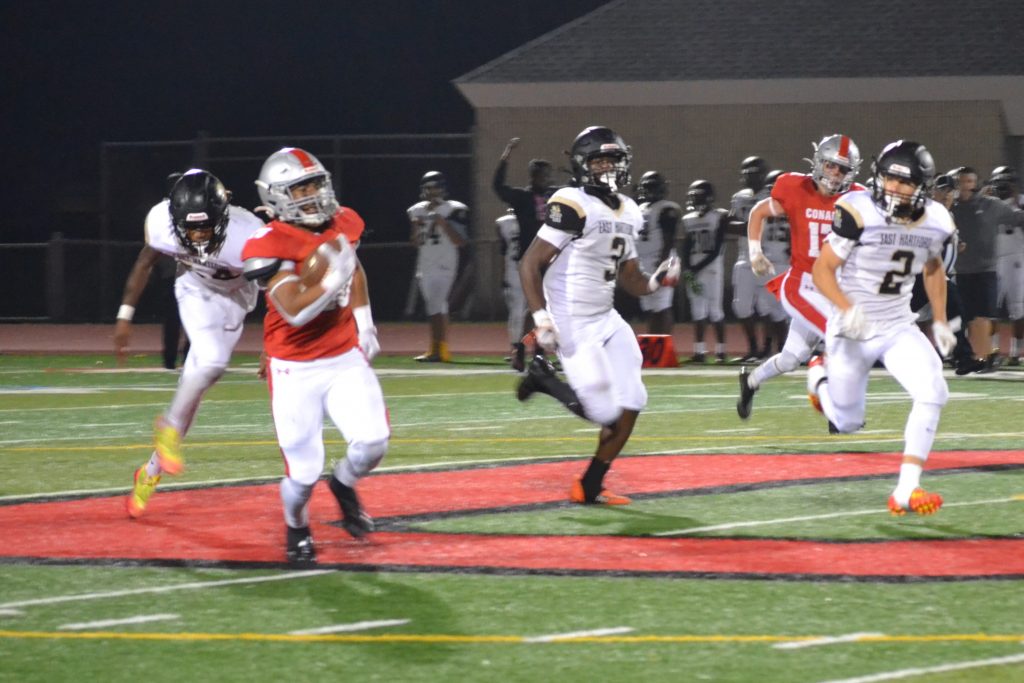 On a night when the offense could not find its rhythm, Conard used a few big offensive plays and timely defensive performances to overcome a rough first quarter and move to 2-2 on the year with the win over the 0-4 Hornets.

Things started about as cold as they could for Conard. On the second play of the game, quarterback Julian Schneider was sacked and on third down the Red Wolves fumbled the ball, setting up the visitors at the Conard 40. On the ensuing series, the defense jumped offsides twice, gave up a touchdown run by Dallas West, and after a blocked PAT, they were down 6-0 just 3:34 into the game.

The next series for the Red Wolves looked like it was going to be another struggle when Jayviaun Dickens’ 30-yard run from scrimmage was called back due to holding. “We were just being undisciplined,” said head coach Matt Cersosimo.

With the ball on their own 34, Dickens went off tackle for a 66-yard score, and with the point after the Red Wolves were in front 7-6 just one minute after the Hornets score. Neither team could get anything going over the final seven minutes of the opening quarter and it ended at 7-6. 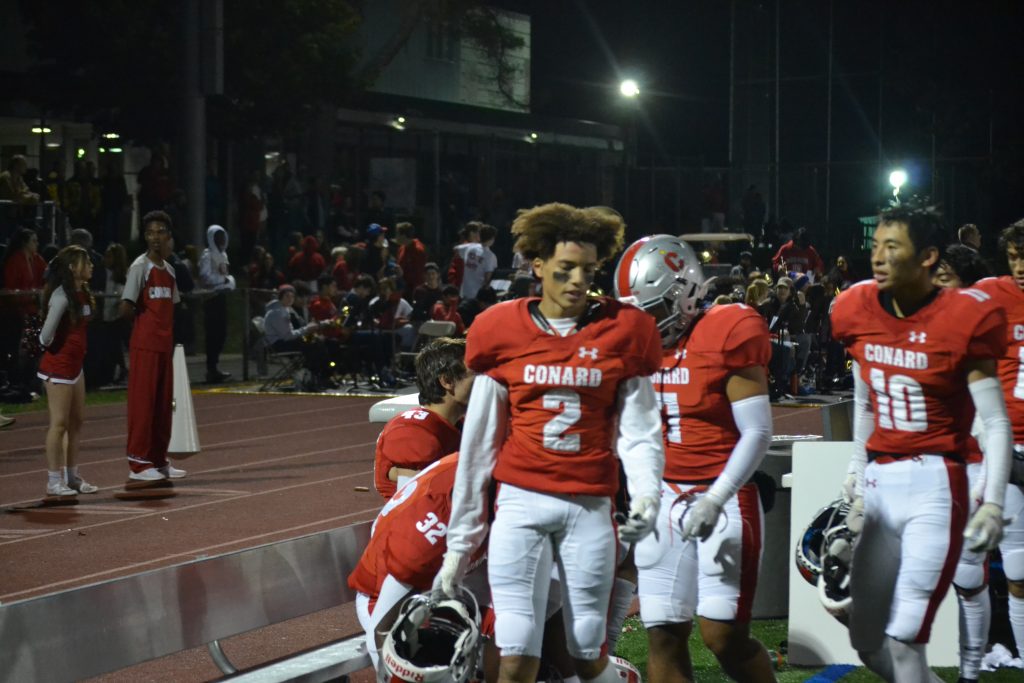 Conard’s opening possession of the second quarter ended on downs, and East Hartford took over near midfield. Quarterback Dravyn Roberts was picked off on second down by Trevor Tanis and he returned it 54 yards for the score. Tanis would get a second interception later in the game that stopped a promising Hornets drive.

Conard’s defense bent but did not break heading towards the intermission. Ryan Bushnell got good pressure on the elusive Roberts and nearly sacked him. With East Hartford looking at fourth and 3 from the Conard 17, Dom Gattinella and Luke Boucher-Zazzaro combined to stop Roberts on a run up the middle to get the ball back for the Red Wolves. 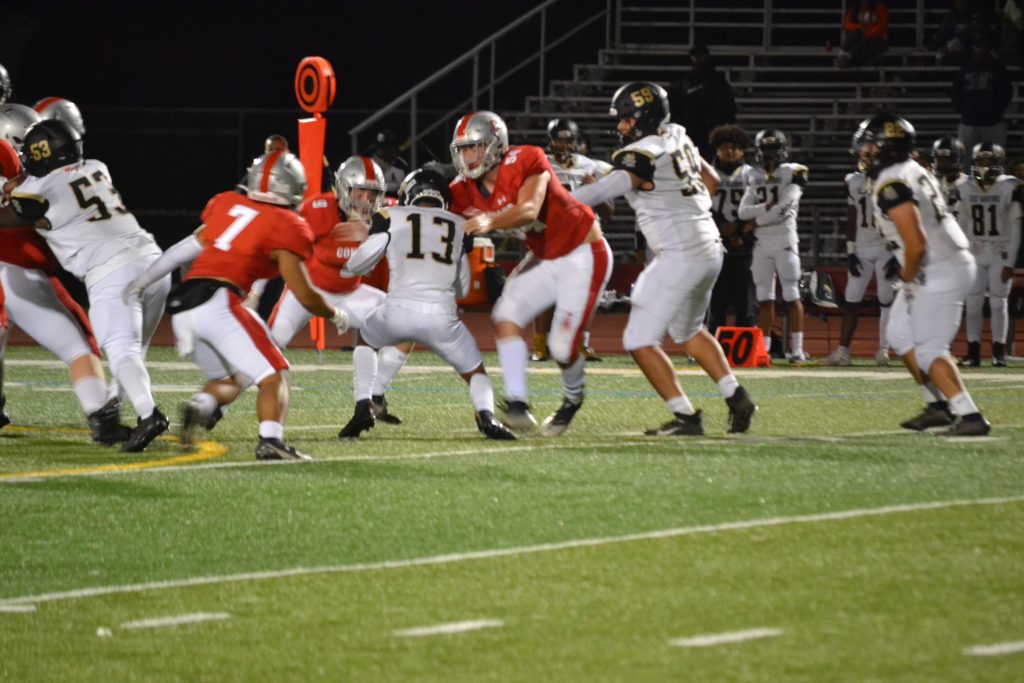 “Bushnell and some of the others really showed up on defense tonight,” said Cersosimo. “Bush did a good job of putting pressure on the quarterback.” Conard could not do anything with the ball and the half ended at 14-6.

The visitors received the second half kickoff and marched down the field on the arms and legs of Roberts, paying it off with a Roberts run up the middle from the 13, and with the 2-point conversion it was a tied game just 2:25 into the half. This time Conard had an answer and it came from the rushing of Dickens and the receiving of Declan McCann. Dickens carried the ball to the 37 before Schneider hit McCann with a screen pass and the senior co-captain raced to the end zone to give Conard the lead. “He is the playmaker who wants the ball in those moments,” Cersosimo said of McCann.,

The Conard celebration was short-lived as Roberts found Jesean Lewis on a post route for a 42-yard touchdown and a 21-all tie. 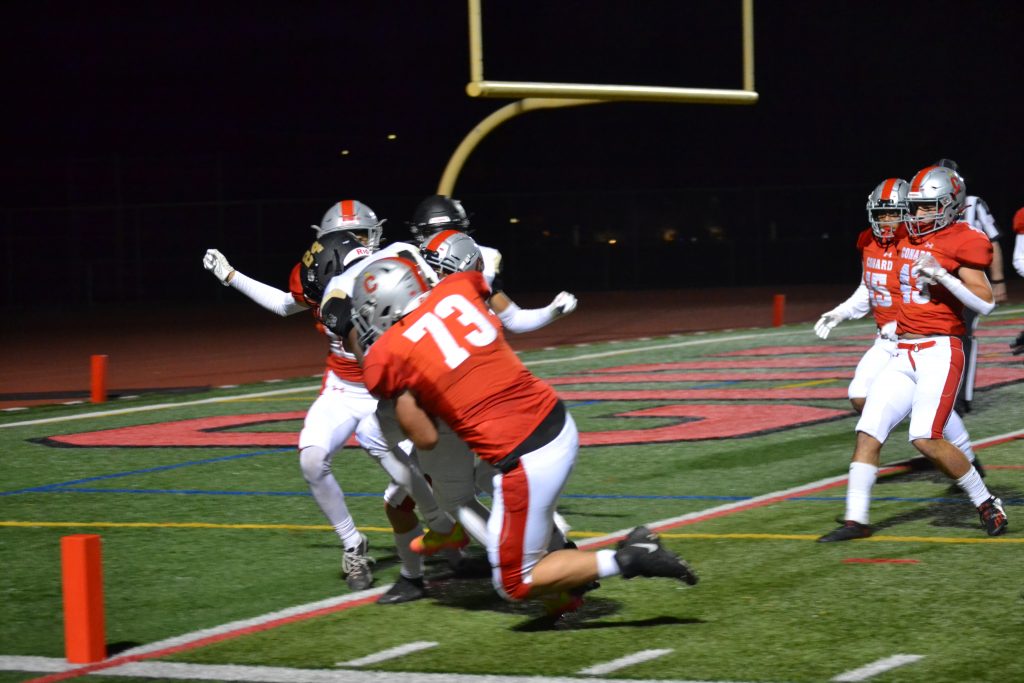 Santana Edwards took the ensuing kickoff 45 yards to the East Hartford 35 and Conard would settle for a 35-yard field goal from Conor Mangini. On the East Hartford possession, Tanis grabbed his second pick of the game deep in Conard territory. On third down of the next drive, Edwards caught a short pass from Schneider and raced 76 yards down the sideline to paydirt giving Conard a 10 point lead with 59 seconds to play in the third.

The teams traded possessions in the fourth and with just 1:47 remaining, Roberts finished off the Hornets’ drive with an 11-yard TD scramble and the Hornets were within 3. Anticipating an onside kick, Cersosimo put his hands team on the field, but East Hartford chose to drive it deep into Conard territory and force the Red Wolves to cover the ball at their own 8 yard line.

The Hornets still had all their timeouts and the plan was to hold Conard, force a punt, and try to tie things up or win it outright. On first down, Conard’s run was stopped and the visitors took a timeout. On second down, Schneider ran for 3, and the Hornets stopped the clock again. On third down, if the Wolves could get a first down, they could run out the clock.

Once again, it was McCann coming up big when his team needed it, as he took a jet sweep, cut into the middle of the field, and was finally tackled at the 42 yard line with 1:19 to play.

Out of timeouts, East Hartford could only watch Conard go into victory formation, take a knee on two plays, and the clock expired with Conard on top 31-28.

Next up for Conard is a visit to Simsbury (1-3) on Friday, Oct. 7, and Cersosimo knows what his message is going to be for his team this week: “Calm down,” he said. “Don’t make the moment too big and rely on your skills and coaching, and do your job.” 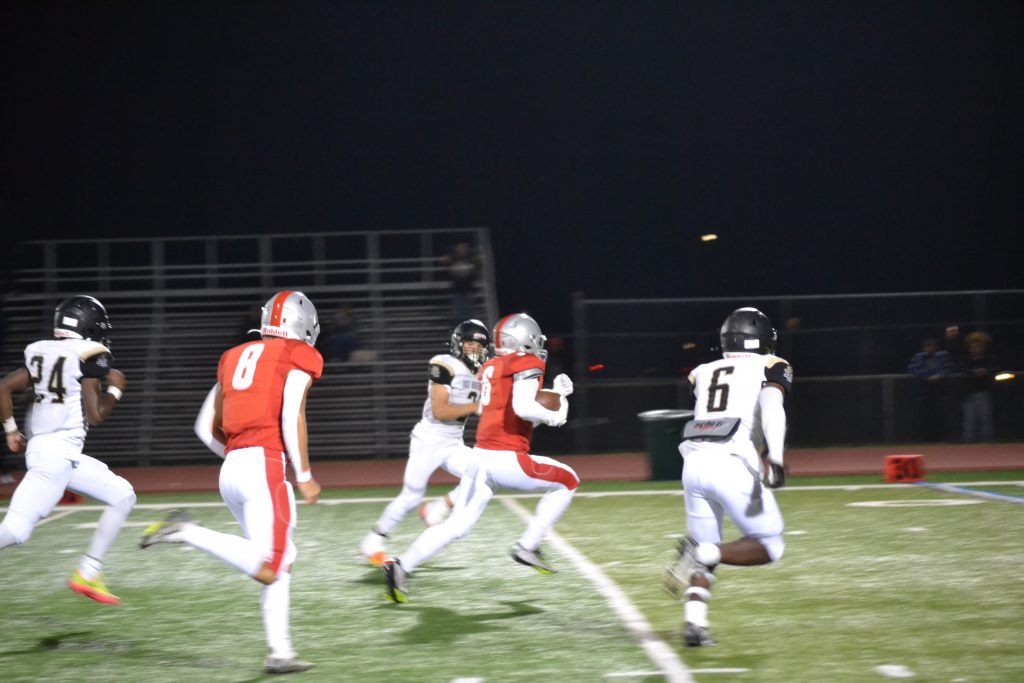