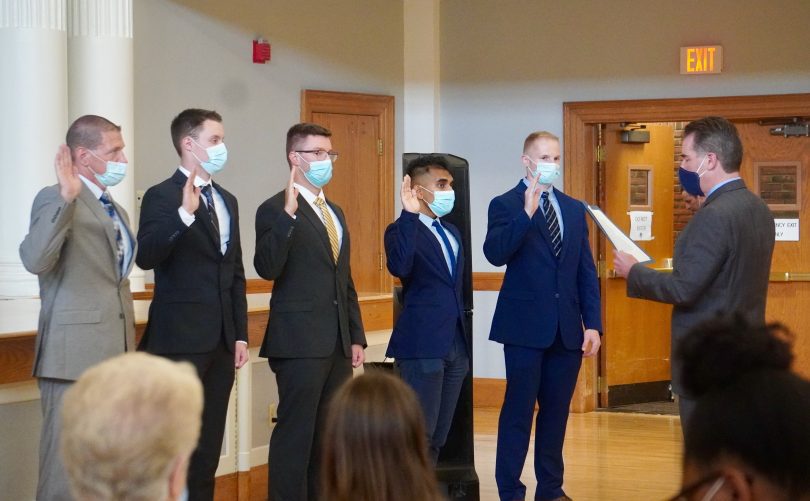 The West Hartford Police Department held a swearing in ceremony on Sept. 8, 2021. 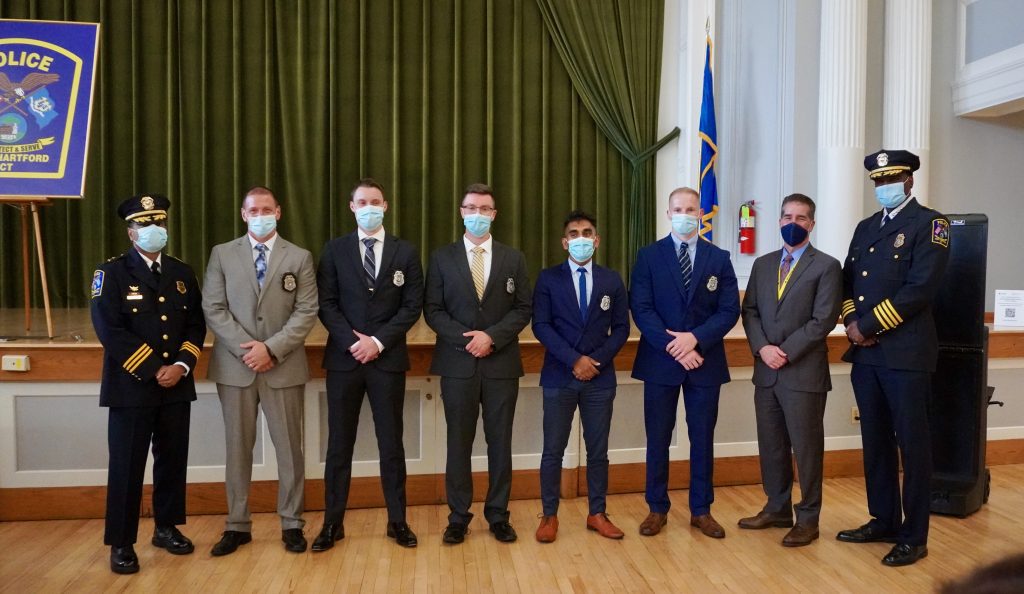 The West Hartford Police Department welcomed five new members Wednesday during a ceremony held in the Town Hall auditorium and attended by family, friends, department members, and other town staff.

The new hires, who were administered the oath of office by Town Manager Matt Hart, include a 21-year Connecticut State Police veteran, a California native, a cybersecurity student, a U.S. Marine Corps veteran, and a 2017 graduate of Conard High School.

Four of the five new officers will attend the Connecticut Police Academy in Meriden beginning Sept. 10, and after completion will undergo field training in West Hartford. 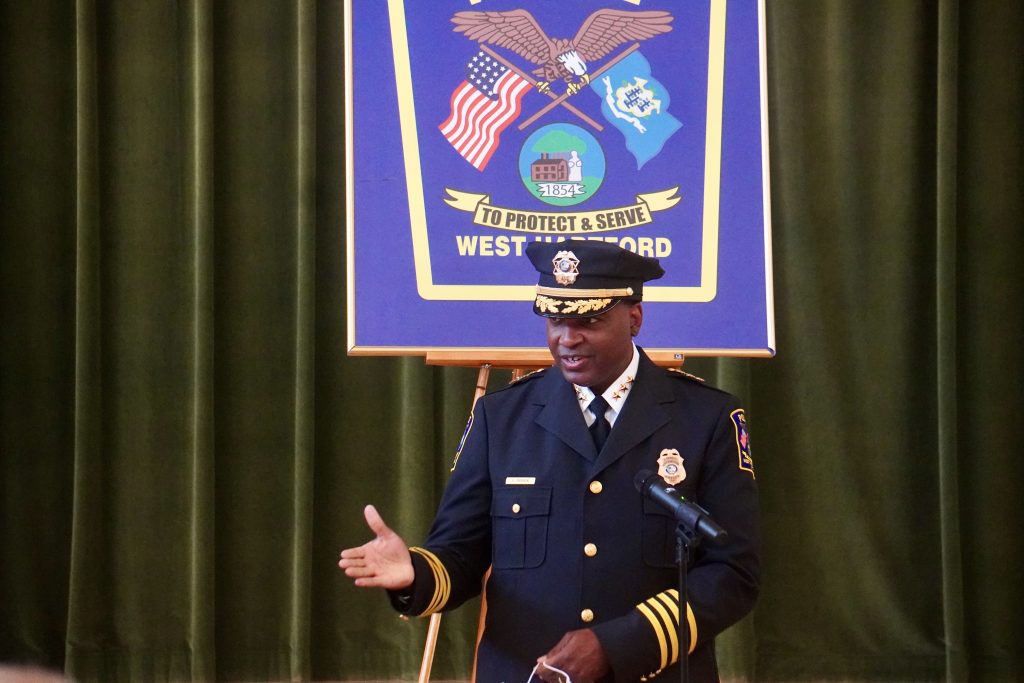 Chief Vernon Riddick advised the new officers to take their oath very seriously. “The oath to protect and to serve is not just for the good times, nor is it just during bad times, nor it for those times in the middle. It’s all times,” he said.

“We will train you, we will support you … but your commitment to us is equally important to our commitment to you,” Riddick said. “I will ask you not to tarnish this badge,” he added, urging the officers to be careful about their behavior. He also urged the officers not to let this job change them.

“Right now our world is in turmoil,” Riddick said. “We are the stabilizing force, not the occupying force, a stabilizing force. When you take this oath you are not better than anybody else. … Any robot can give out a ticket, but it takes empathy, compassion, and human to help an elderly person across the street, to help even the drug dealer who has had a bad day.”

Honor, integrity, and respect are what he expects from all, Riddick said. 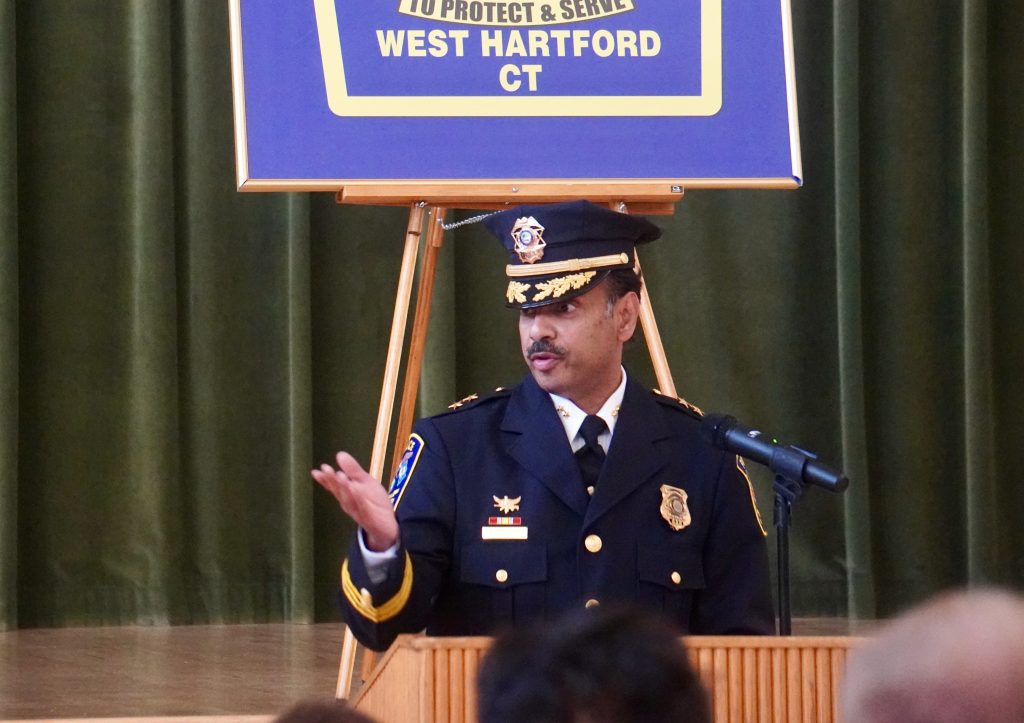 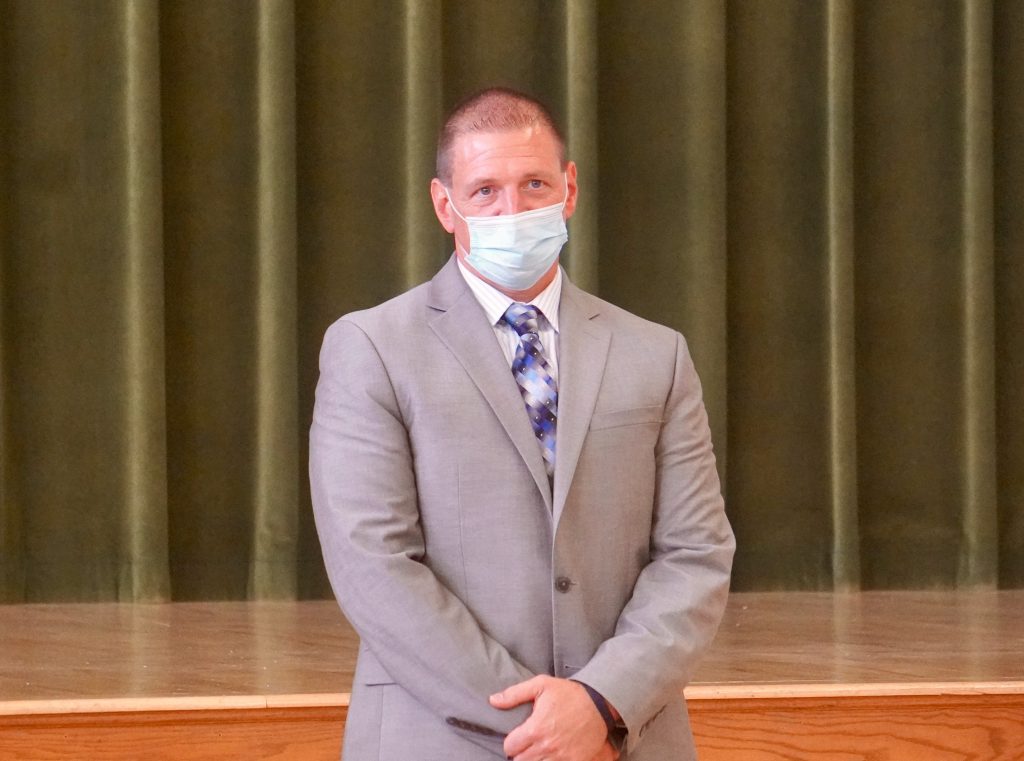 Smith, a Vernon, CT native who graduated from Howell Cheney Technical High School in Manchester and earned a bachelor’s in sociology with a focus on criminal justice from Eastern Connecticut State University, has more than 20 years of law enforcement experience and is already training directly with the West Hartford Police. Smith started his career with the East Hartford Police Department and recently retired as a major after a 21-year career with the Connecticut State Police.  He is also a graduate of the FBI National Academy’s executive leadership program. 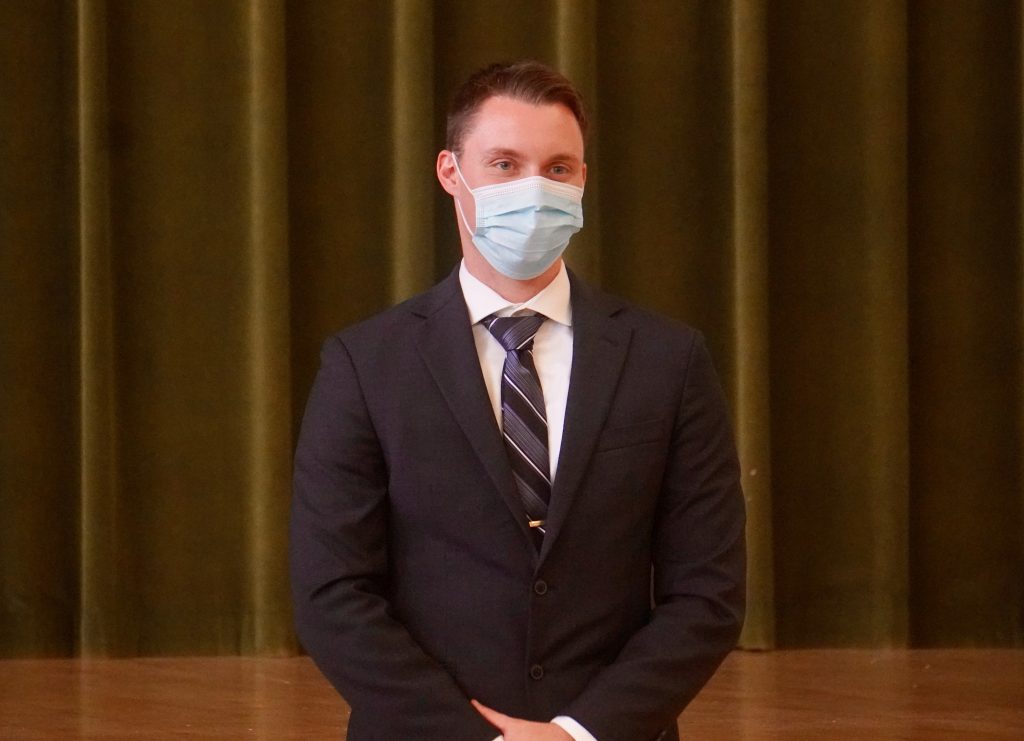 Berbereia grew up in Visalia, CA, and graduated from El Diamante High School. After attending community college at College of the Sequoias, he transferred to California State University, Fresno, from which he graduated with a bachelor’s of science in criminology. He recreated to Connecticut with his fiancé shortly after graduating, and was working for Lowes while pursuing a career in law enforcement. 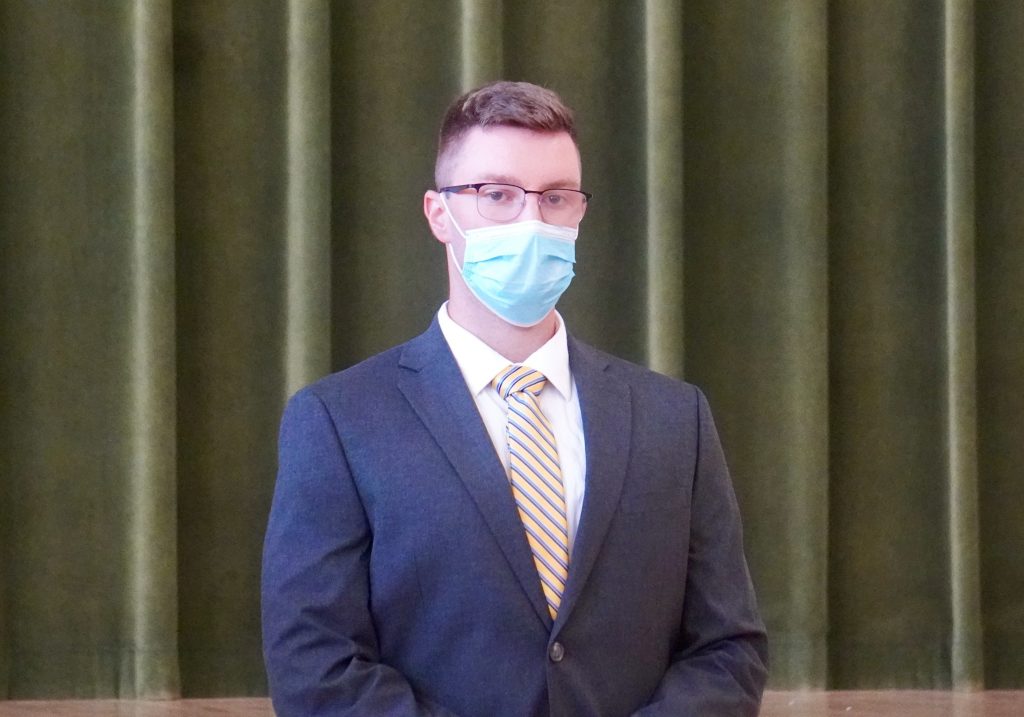 Riley grew up in Glastonbury, CT, and after graduating from Glastonbury High School attended the University of New Haven where he obtained a bachelor’s degree in criminal justice, with a minor in sociology and a concentration in investigative services. He is currently working on his master’s degree in homeland security with a concentration in cybersecurity, and is on track to receive a graduate certificate in intelligence from Tulane University. He has been an intern with the New Haven Police Department’s Narcotics and Intelligence Unit, and worked as a global security intelligence analyst with SafeAbroad. 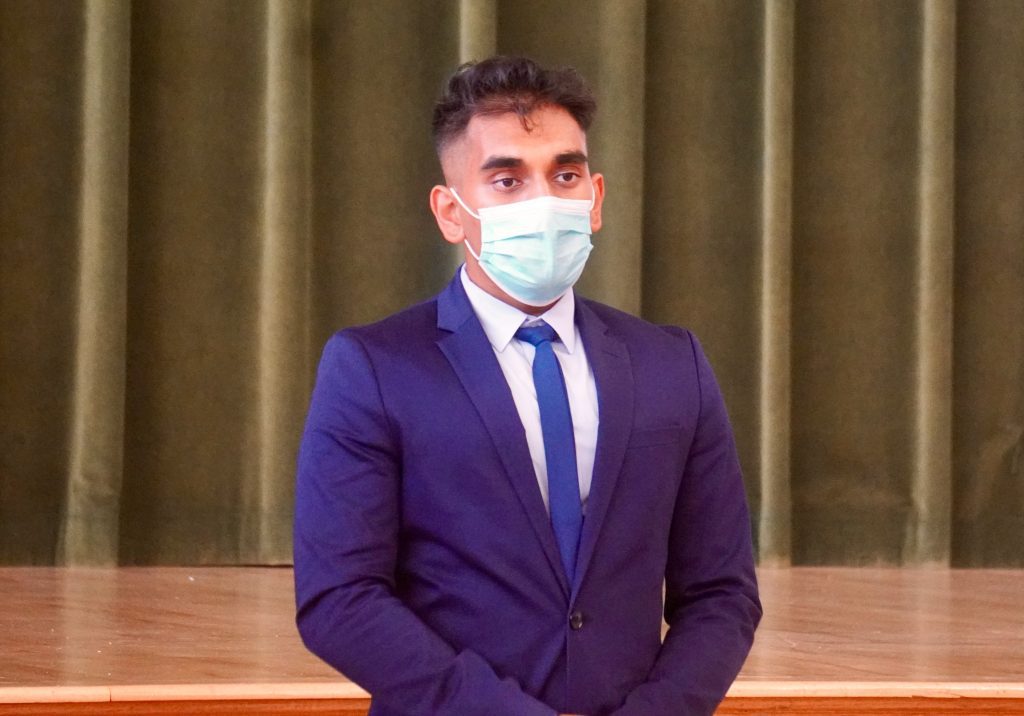 Hossain is the son of immigrants from Bangladesh, and he and his brother grew up in Queens, NY. He graduated from Brooklyn Technical High School and in 2017 earned a bachelor’s degree in criminal justice from Joy Jay College of Criminal Justice. He and his brother both enlisted in the U.S. Marine Corps, and Hossain graduated from boot camp at Parris Island and the School of Infantry in 2019, returning home to begin serving in the reserves and pursuing a law enforcement career. 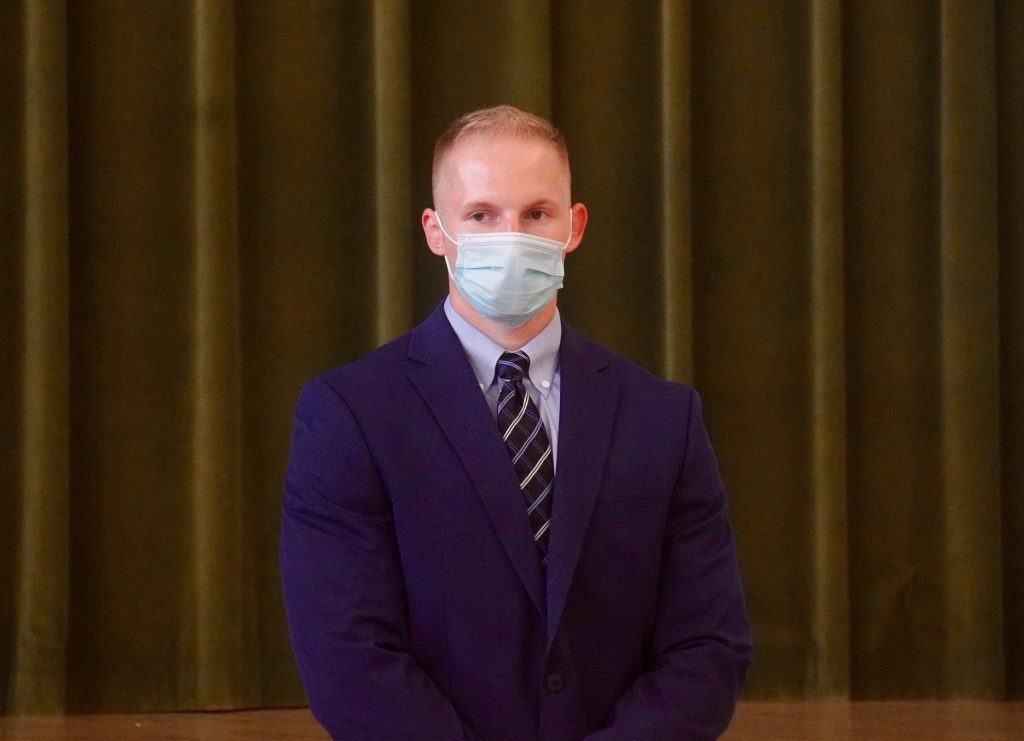 Paulus, a West Hartford native, is a 2017 graduate of Conard High School where he participated in football, track and field, and cross country. At a young age he developed an interest in law enforcement, and served as a junior cadet with the Simsbury Police Department and then the West Hartford Police. He worked as a security guard at Lake Compound and in 2021 earned his associate’s degree in criminal justice from Tunxis Community College.

Lt. Thomas Lazure served as emcee for the event. 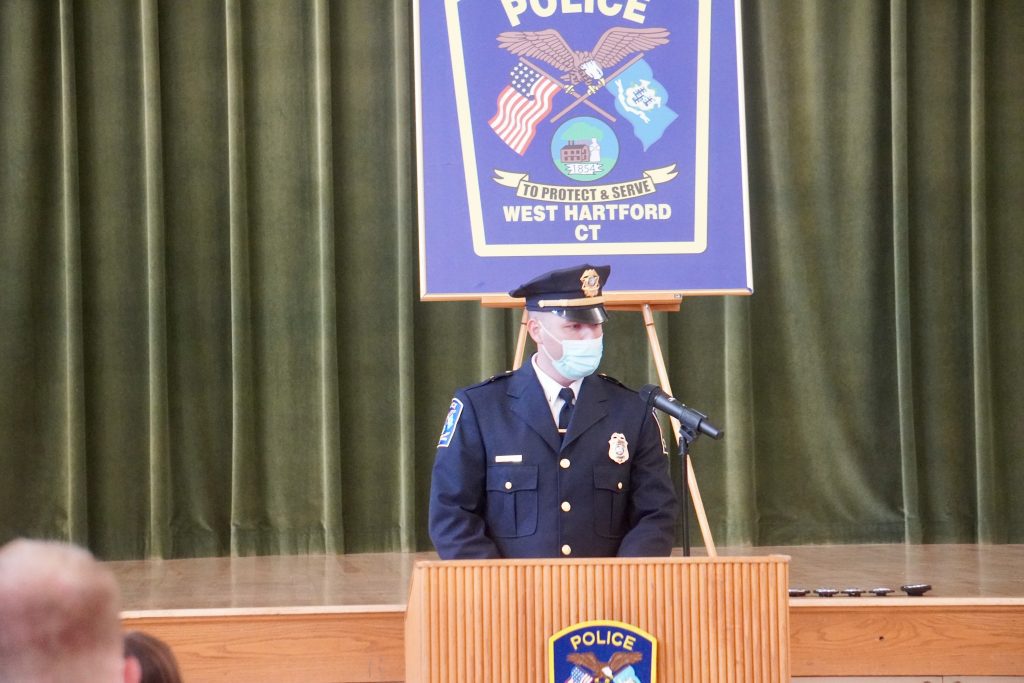