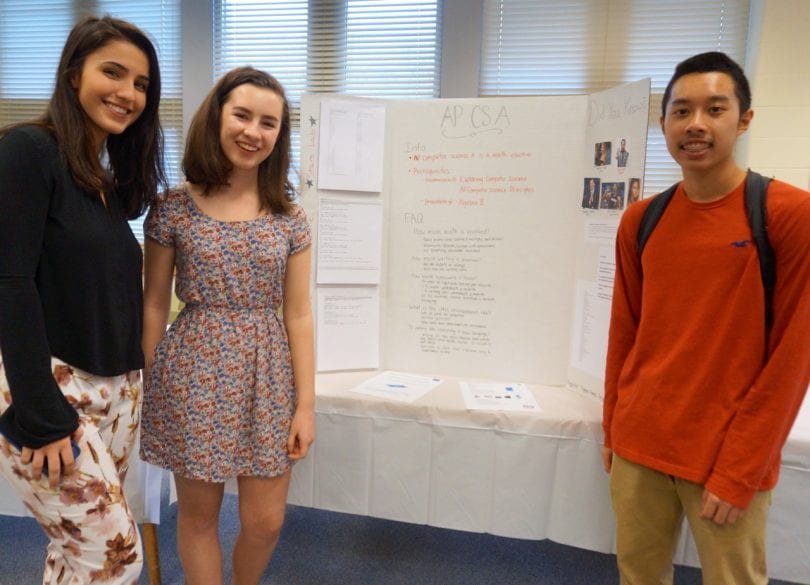 From left: Misa Uvalic, Emily Kyle, and Thomas Hoong said that it should not be intimidating to take AP computer science, and it doesn't require a lot of prerequisite math classes. Photo credit: Ronni Newton

The entire student body of West Hartford’s Conard High School was invited to a Computer Science Showcase on Wednesday, in an event to encourage as many as possible to take classes in the subject. 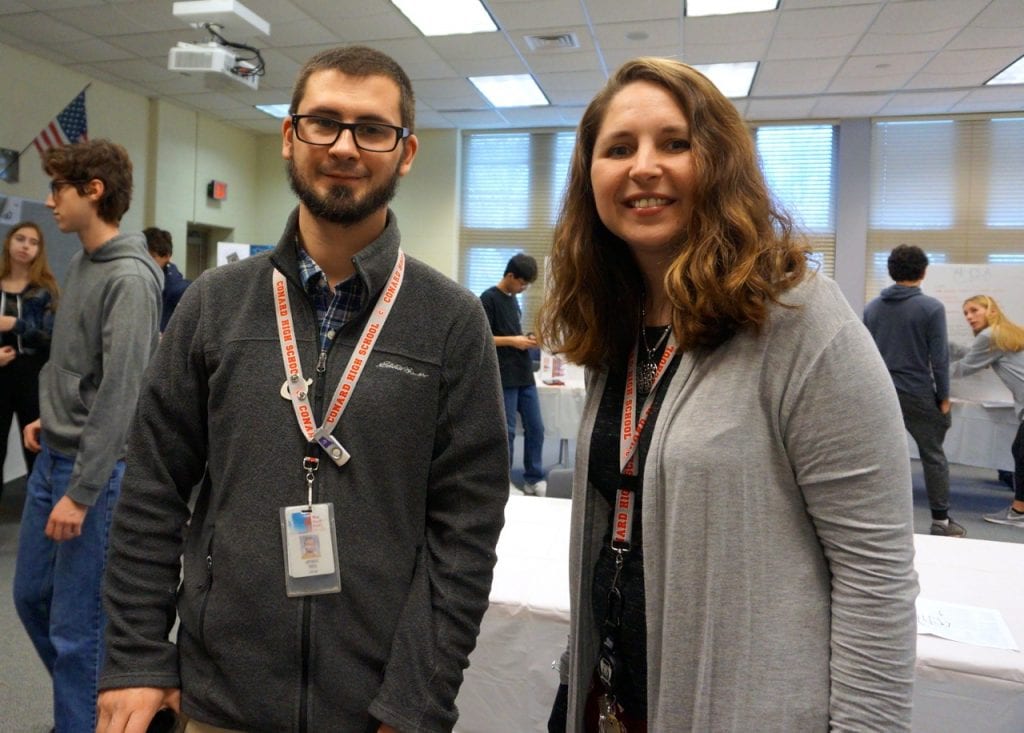 Students from West Hartford’s Conard High School streamed through Room 169 throughout the day Wednesday, speaking with their peers who had prepared displays based on what they have learned in their computer science classes.

“Many of the students understand why computer science is important, but they’re afraid to sign up,” Corricelli said.

Tony Truss, who also teaches engineering courses at Conard, said that speaking with their peers “softens the impact” for students. He noted that industry professionals and a Conard alum who is a computer science major were also invited to the showcase as guests, to give students a glimpse into the future of the industry.

Exhibits created by the students included highlights of what each computer science class level studies, as well as a deconstructed computer and a robot that one of the students had built.

Senior Charles Hosek spoke with students about his experience in the games and website design class. “We’re creating and designing our own games. It’s really easy and the teachers are really nice. You can create anything,” he said.

Ashleigh Kobialka said that the introduction to computer science class “lays a foundation for computer science and for the future.” She encouraged everyone to at least take an introductory course, even those who might not want to study computer science, because the problem-solving and critical-thinking skills are transferable to any industry.

“Students get really intimidated,” said Purit Butsapak, but they shouldn’t. He said the course explains so much about web design, programming, analysis, and robotics.

Classmate Hamad Ahmed showed off a robot he made over the weekend. It’s designed to pick up objects and also “barks,” he said. “There’s no denying that technology is the future,” he said, and studying computer science will help impact the course of evolution.

Sophomore Sebastian Krueger stood by a deconstructed computer, and said that through studying computer technology he had learned what was inside and was confident that he could put it back together and make it workable. “I built my own computer with the help of this class,” Krueger said.

Even the AP computer science students assured those visiting the showcase that the courses were not so scary, and learning how apps are run is important for every industry. It’s not necessary to have taken advanced math classes, or to know how to code before taking the classes, said Misa Uvalic, who now knows how to code in Java.

Several clubs also set up exhibits at the showcase, including “Girls STEMming Up,” an all-girls club that has about 20 members at Conard.

Abby Tonkinson, wearing the “STEM-inist” t-shirt that club members had designed, said that the focus is on educating other girls in STEM fields. They will be hosting three coding events – one for elementary school students, one for middle schoolers, and one for moms around Mother’s Day.

“You don’t need to know computer science to join,” said Eleanor Duva. The focus is on building relationships with the younger students and encouraging them to learn computer science “at a young age, before it becomes intimidating.”

One of the biggest draws of the showcase was a game console created by the Technology Student Association and Astronomy Computer Science Engineering (ACE) club. Dylan Wu and Ben Ratchford showed off the exterior of the arcade game that they had constructed in class, with some parts created with Conard’s 3D printer.

Student Jackson O’Sullivan programmed the console to play about 200 arcade games, many of which were hits with the teachers as well as the students. Ratchford said the games were “from an era of arcade machines – games we’ve never heard of.”

“We’ll be leaving it at the school to promote TSA,” Wu said.

Kelly Jones graduated from Conard in 2014, and said she took AP computer science in just the second year it was offered. She is now a computer science major at Marist, and shared her experiences with the current Conard students.

Jonathan Pinney, Conard ’02, is an integrations engineer with Duck Creek Technologies in Farmington. He said he came to the showcase to encourage students to study computer science, and to get them interested in what comes after college.

Computer science is the glue, and a pillar for other disciplines. “It revolutionizes the way that math teachers teach problem solving, helps in the technology department,” said Corricelli.

Holding the day-long showcase, she said, gets all of the students exposure to computer science.

“I hope it reduces fear, not just for the kids but for the adults, too,” said Corricelli. “It’s just problem solving with a tool.” 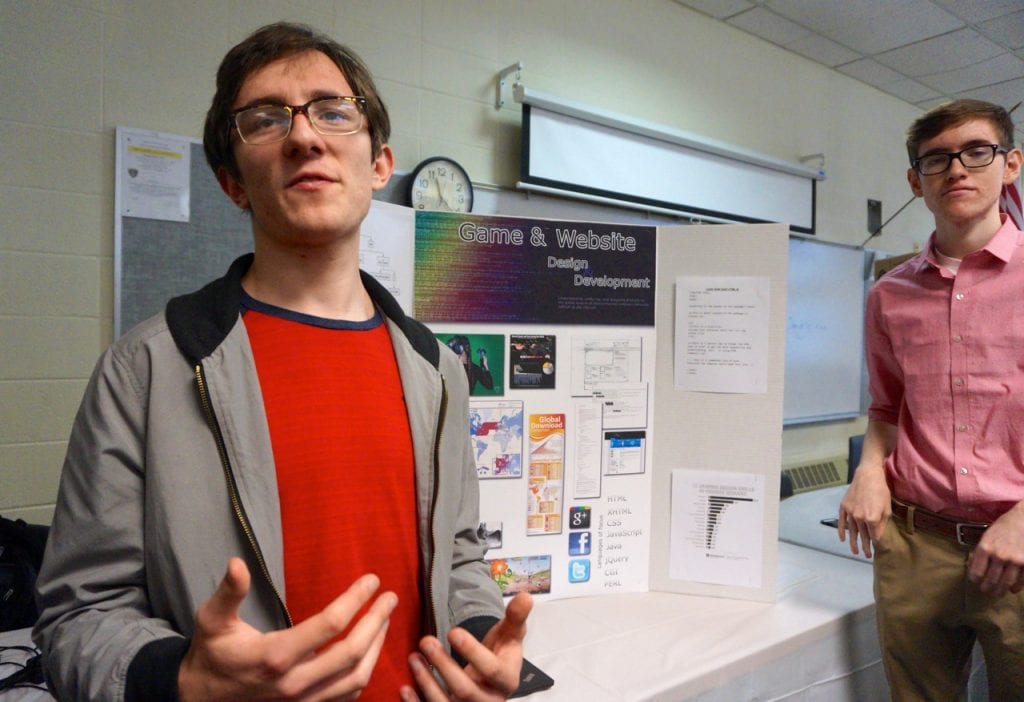 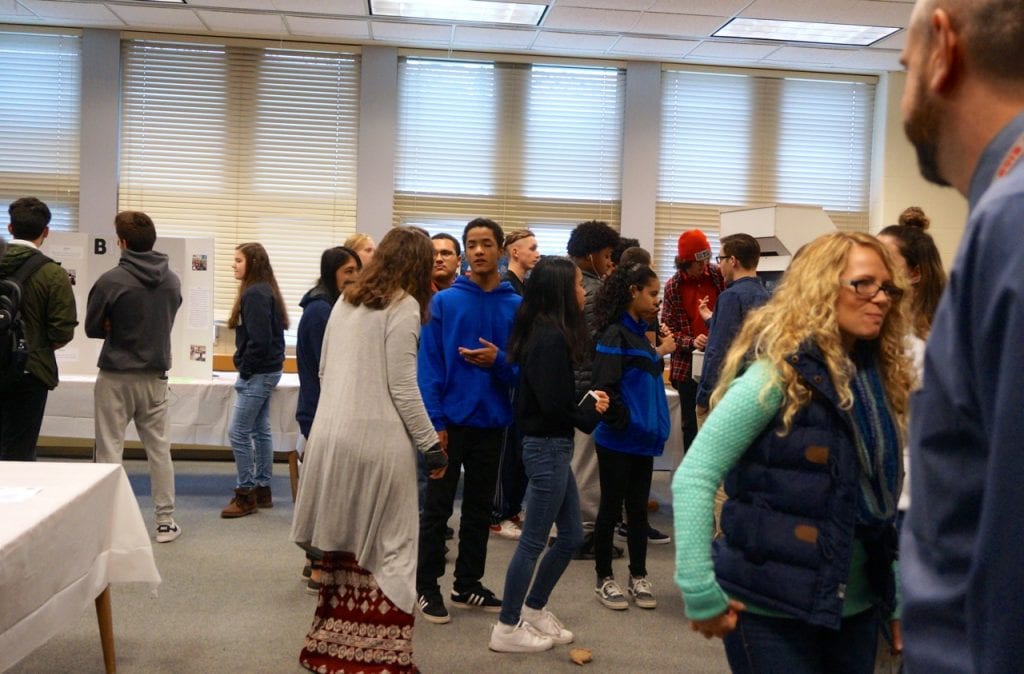 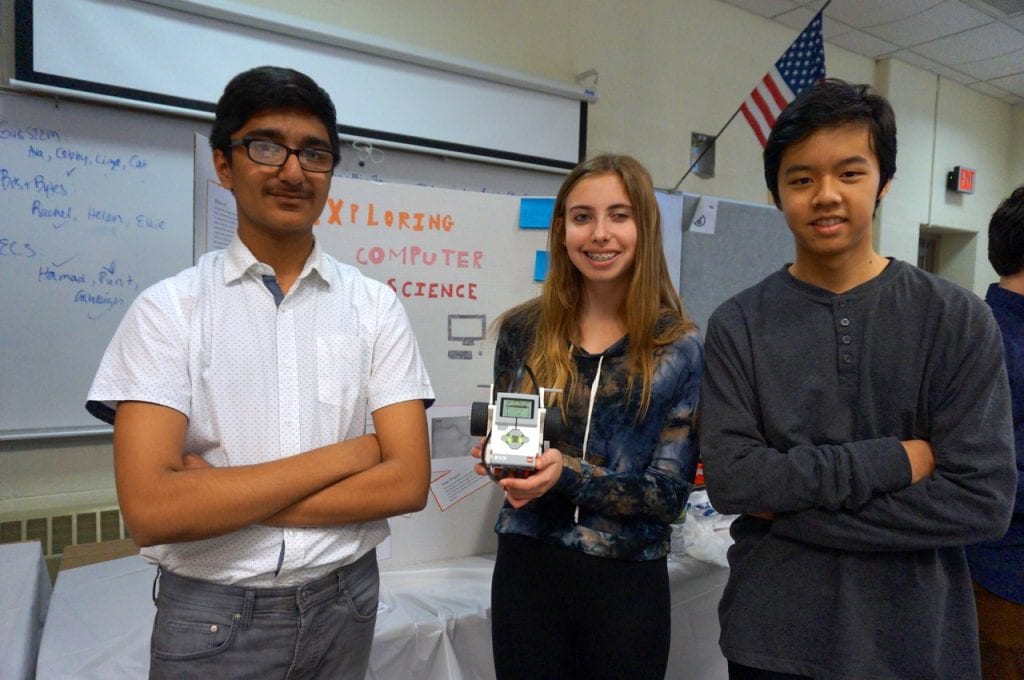 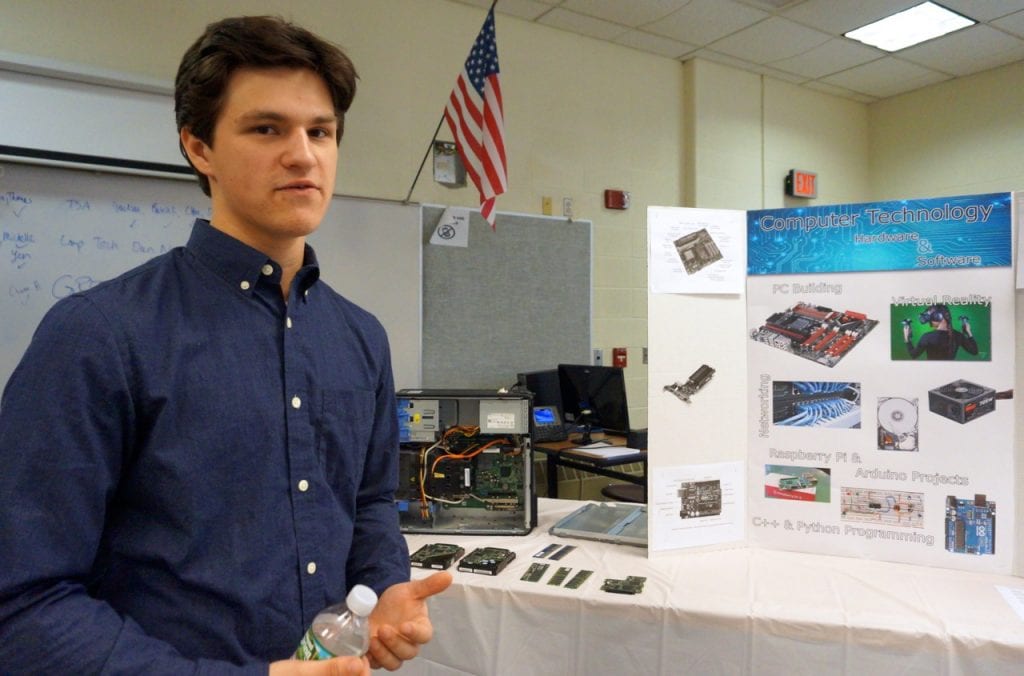 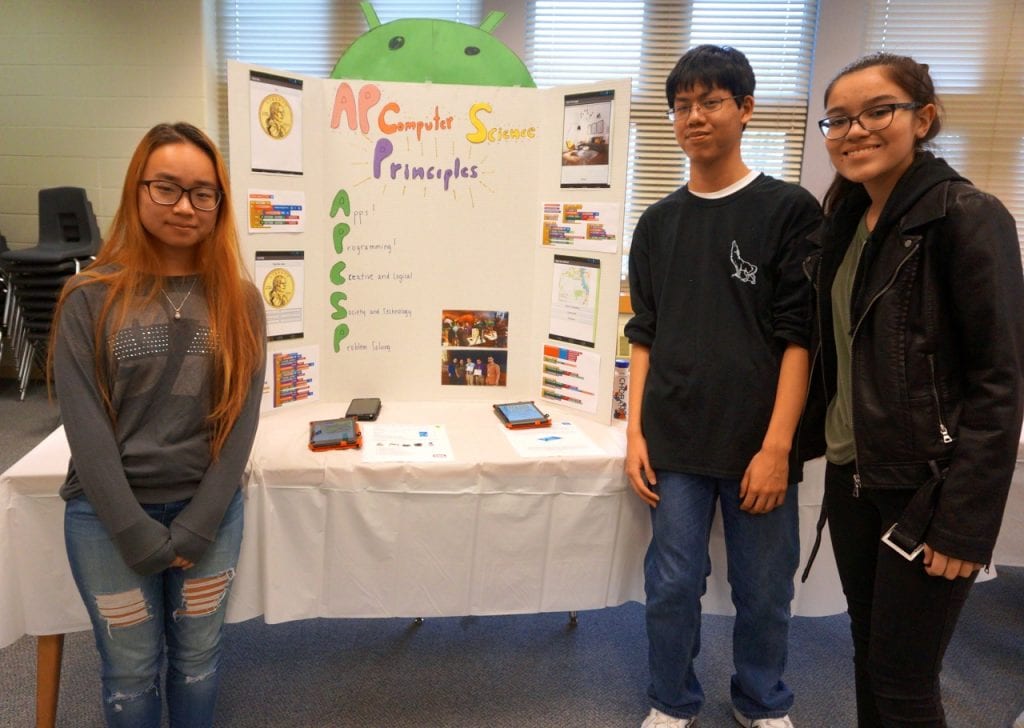 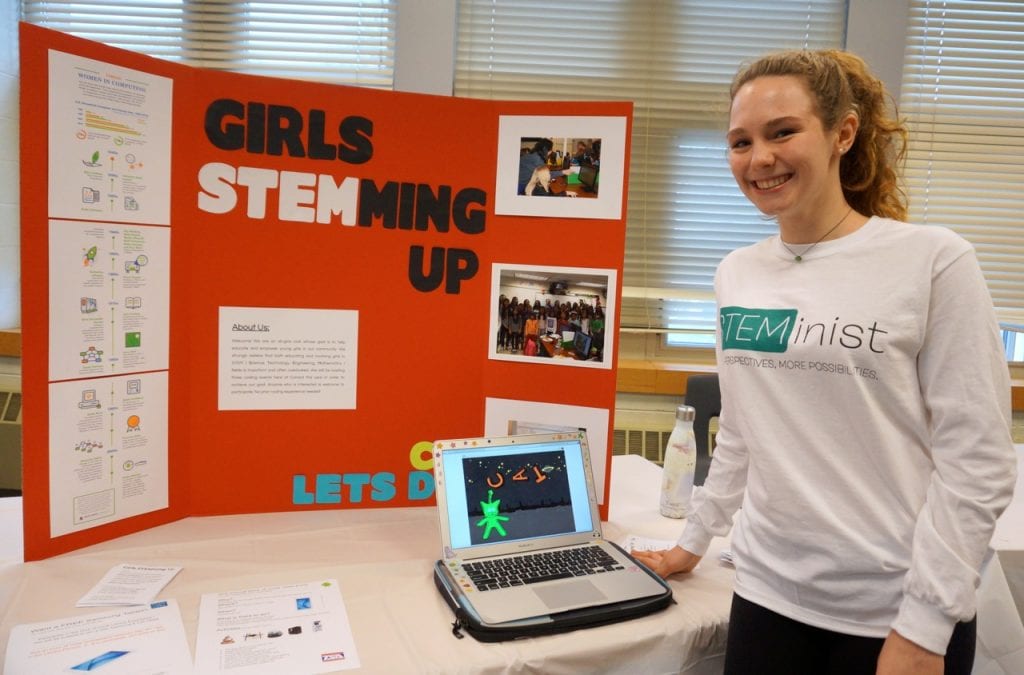 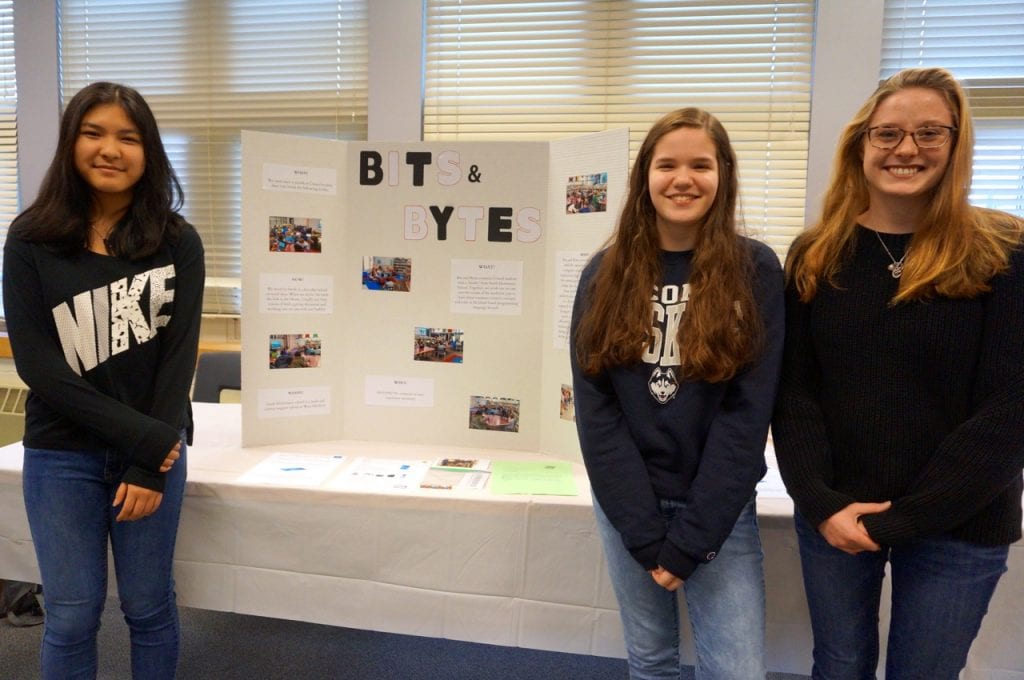 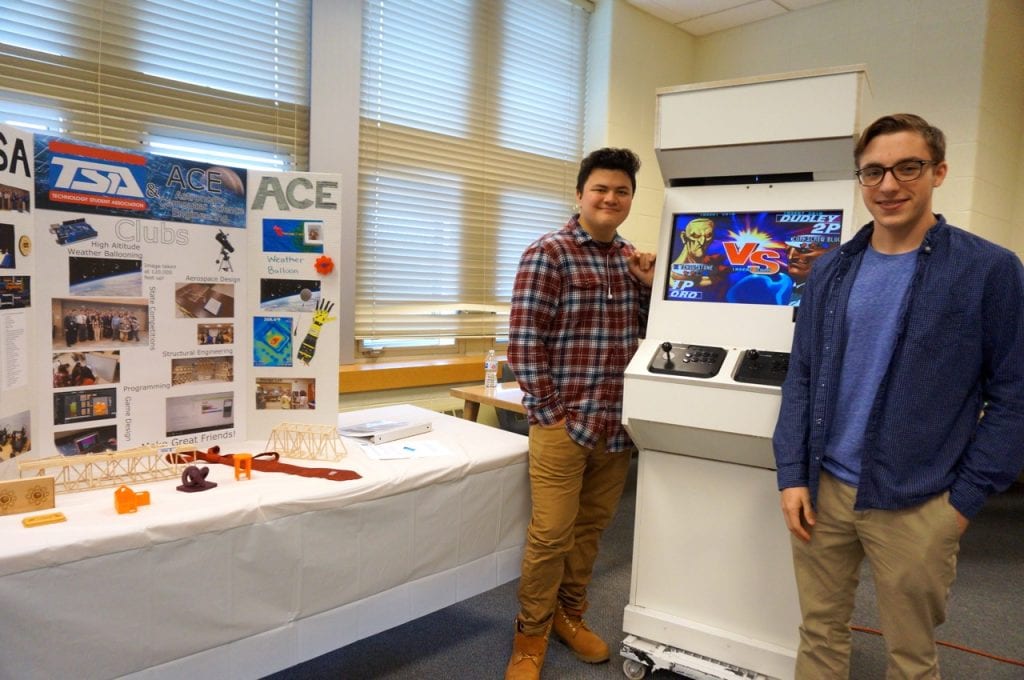 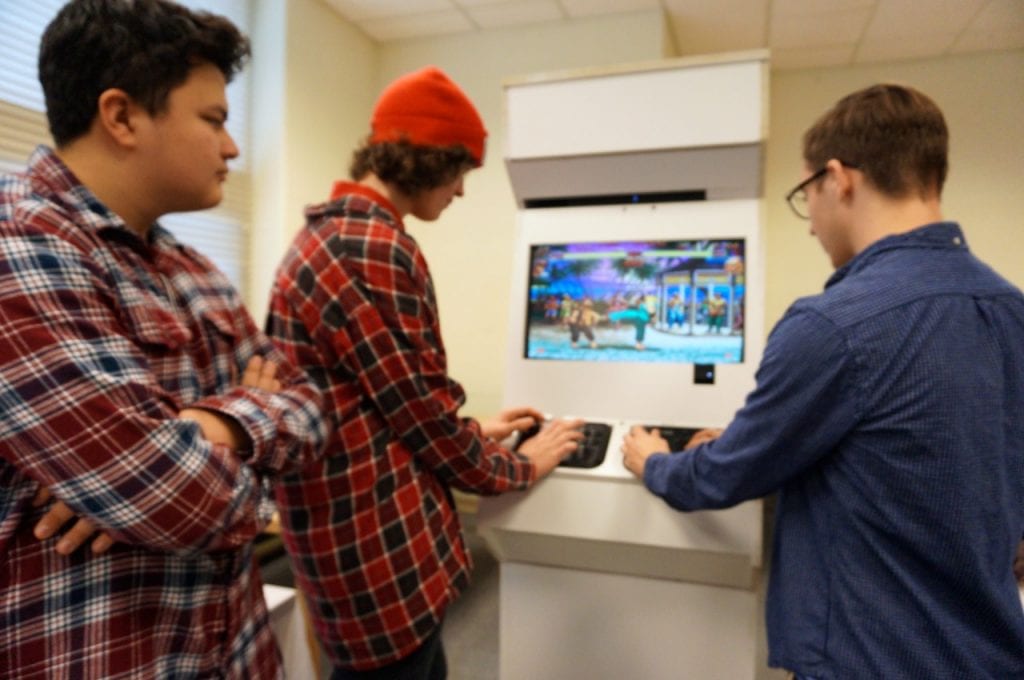 Jackson O’Sullivan (center) plays one of the games he programmed into the console he built with Dylan Wu (left) and Ben Ratchford. Photo credit: Ronni Newton 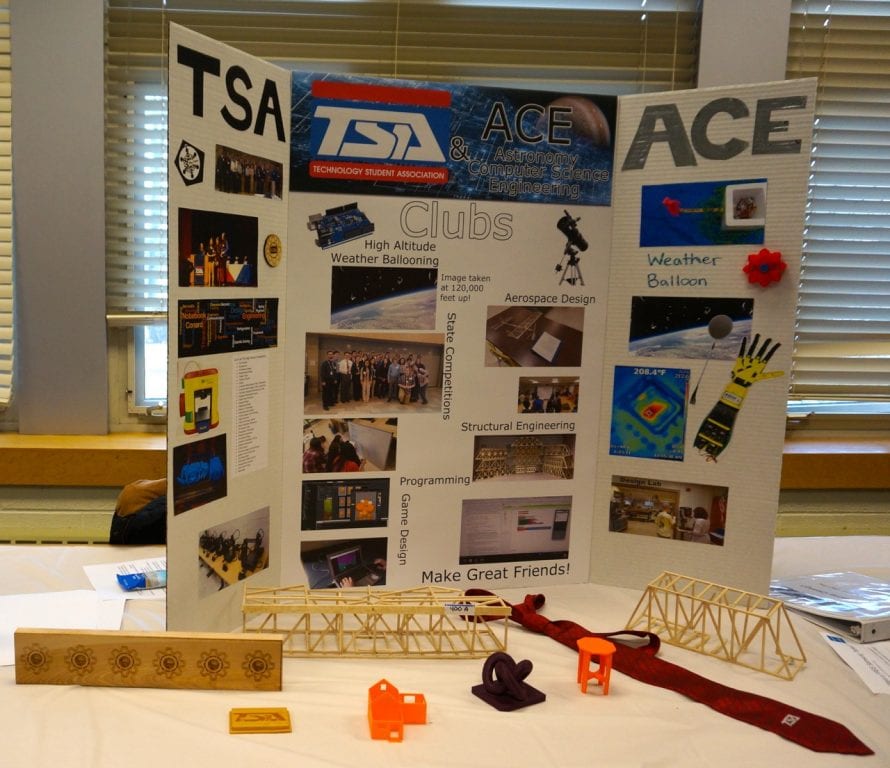 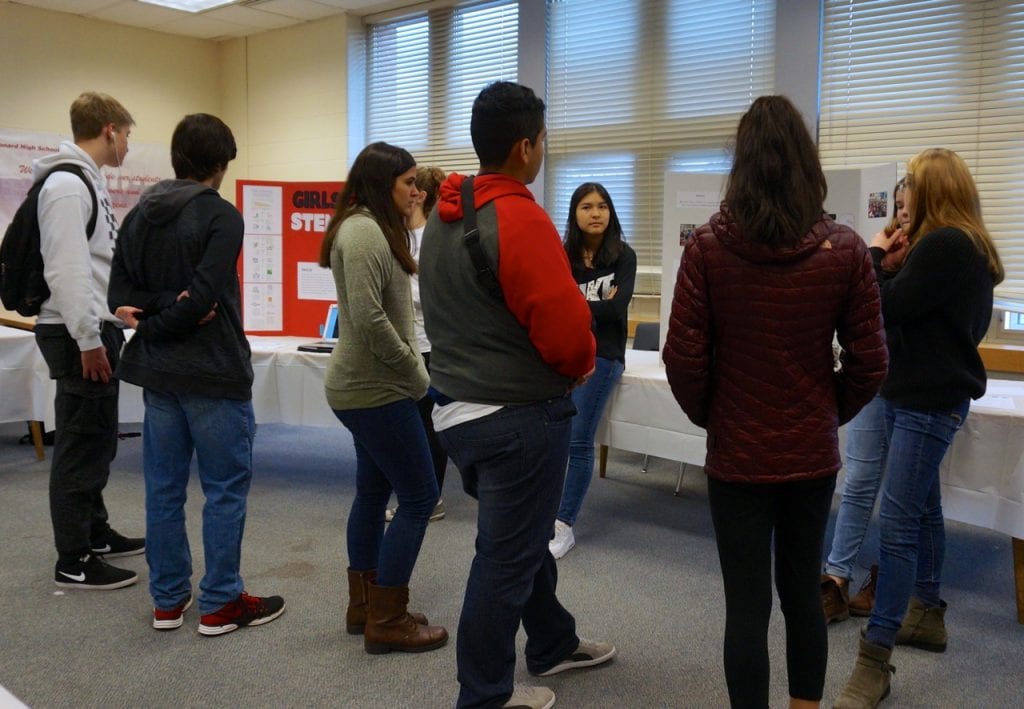