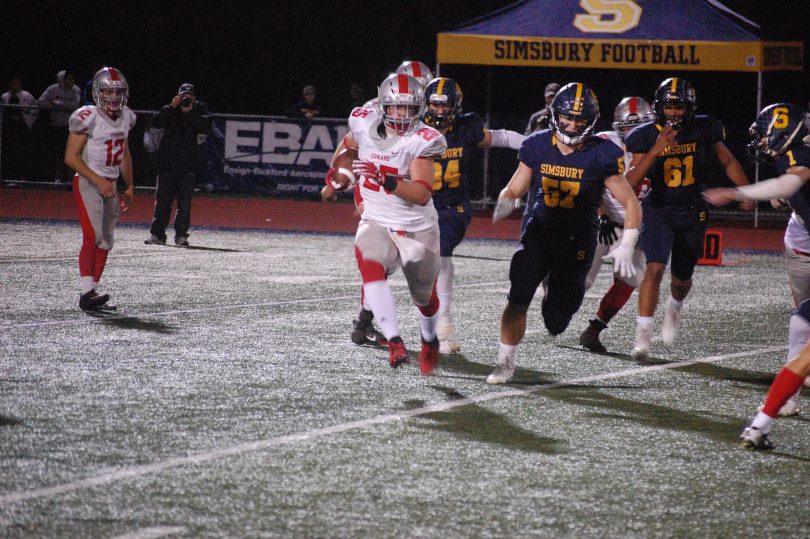 Conard offense doesn’t click and defense gets worn down in loss to Simsbury. 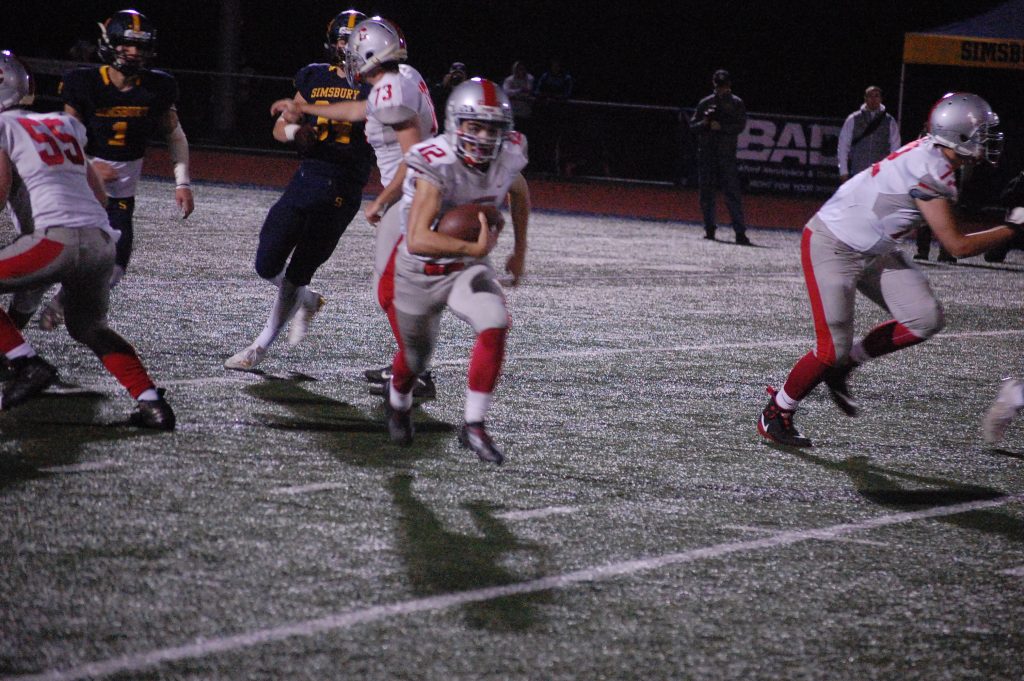 The Conard High football team reached the midway point of the season Friday night in Simsbury. Based on the outcome, it may have been the low point of what has been an up-and-down first half for the Chieftains.

A 32-0 road loss to the unbeaten Trojans at Holden Field marked the first time this season Conard failed to score in a game.

It was a much different game for Conard (2-3) than its previous two outcomes – a two-point victory over East Hartford and a one-point loss to Glastonbury. Starting with a 54-21 loss to Southington in the season opener, Conard has produced a different result in each of its successive four games. The two wins over West Haven and East Hartford were followed by the losses to Glastonbury and Simsbury, respectively.

Simsbury’s 5-0 record represents a complete reversal from a year ago when the team lost its first five, followed with five straight wins to end the season.

“I’m very impressed with Simsbury. Who they were was exactly what I thought they were going to be,” Conard head coach Matt Cersosimo said. “After looking at them on film, I got a chance to watch them play New Britain. Dave [Masters] and his staff have done an awesome job with his team. They’re really rolling and clicking on all cylinders. It seems like they’ve got athletes and playmakers at every position and they’re playing at a high level. I tip my hat to them. They really did a nice job tonight.”

Conard’s defense looked stout early but couldn’t manage to contain Simsbury’s balanced offensive attack. The Trojans amassed about 420 total yards, according to their statistician, with roughly half coming through the air and the other half on the ground.

Simsbury junior quarterback Aiden Boeshans completed 14 of 23 passes for 210 yards and three touchdowns, including a pair of scoring strikes to senior Zack Gilbert in the fourth quarter. Jeffrey Coleman had six catches for 135 yards and a TD.

Conard’s offense could not capitalize on an early turnover by the Trojans that gave the ball to the Chieftains on the Simsbury 21 yard line. Conard gave it right back.

On the first play, quarterback Jack Kennedy threw a pass into double coverage. The ball was deflected by Simsbury’s Jeffrey Coleman and came down into the arms of Michael Schulitz, the first of three interceptions by the Trojans.

After forcing the Trojans to punt, Conard had good field position, but the drive stalled at the Simsbury 20 when quarterback Israel Lopez tried to connect with Zachary Cohen over the middle on fourth-and-5 and Dan Sohn broke up the pass.

Conard forced another Simsbury punt, but once again the Chieftains gave the ball back to the Trojans when Lopez, rolling to his left on third-and-3, threw a pass that was intercepted by Coleman.

This time, Simsbury took advantage of the turnover. The Trojans drove 41 yards on eight plays, capped by a 1-yard plunge into the end zone by Sohn to make it 6-0 with 4:33 left in the second quarter.

Simsbury forced a three-and-out by the Chieftains and got the ball back with just over 3 minutes left. Boeshans threw a deep ball down the right side that Coleman hauled in at the 25-yard line. A few plays later, the two hooked up again as Boeshans found Coleman in the end zone for a 26-yard TD pass to make it 12-0 with 1:11 left. Coleman had six catches for 135 yards.

Simsbury increased its lead by putting together a 13-play, 80-yard scoring drive to start the third quarter. The Trojans scored two touchdowns in the fourth, both on passes from Boeshans to Zack Gilbert.

“I just thought the mistakes that we made that they capitalized on allowed them to wear down our defense with their run game,” Cersosimo said.“When we don’t play complimentary football and our offense is off the field a lot and our defense is on field a lot, sooner or later they’re going to find some cracks in the seam. That’s a good team and you can’t play that kind of football against a good team like that.”

The Chieftains have a bye this coming weekend. Their next game is Oct. 25 against Enfield at McKee Stadium in West Hartford. 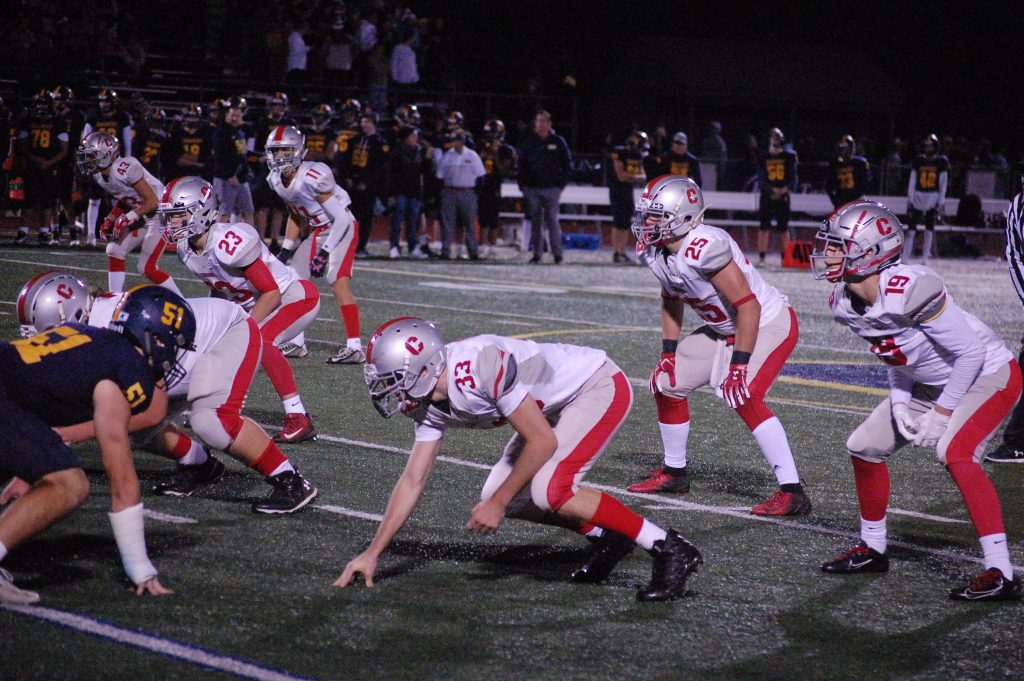