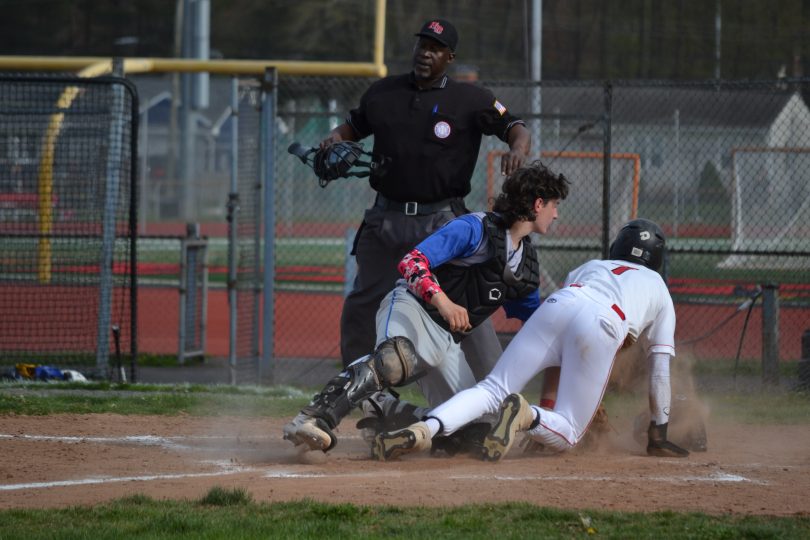 Brendan Grady beats the throw home as he scores on an infield pop-up. Conard vs. Seymour baseball. May 5, 2022. Photo credit: Paul Palmer 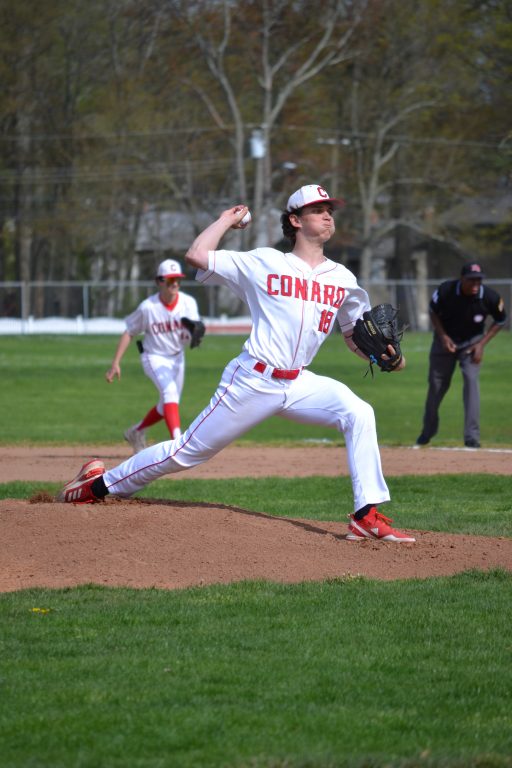 Riding the right arm of Nick Kane, the Conard Chieftains won their fourth game in a row and fifth in the last six with an 11-1 home win over Seymour on Thursday.

The senior also contributed from the plate with a triple and a home run, and four RBI. Matt Santoro double, bringing in two runs, and then tripled in the fifth and scored when the throw to third went wide and he scampered home. 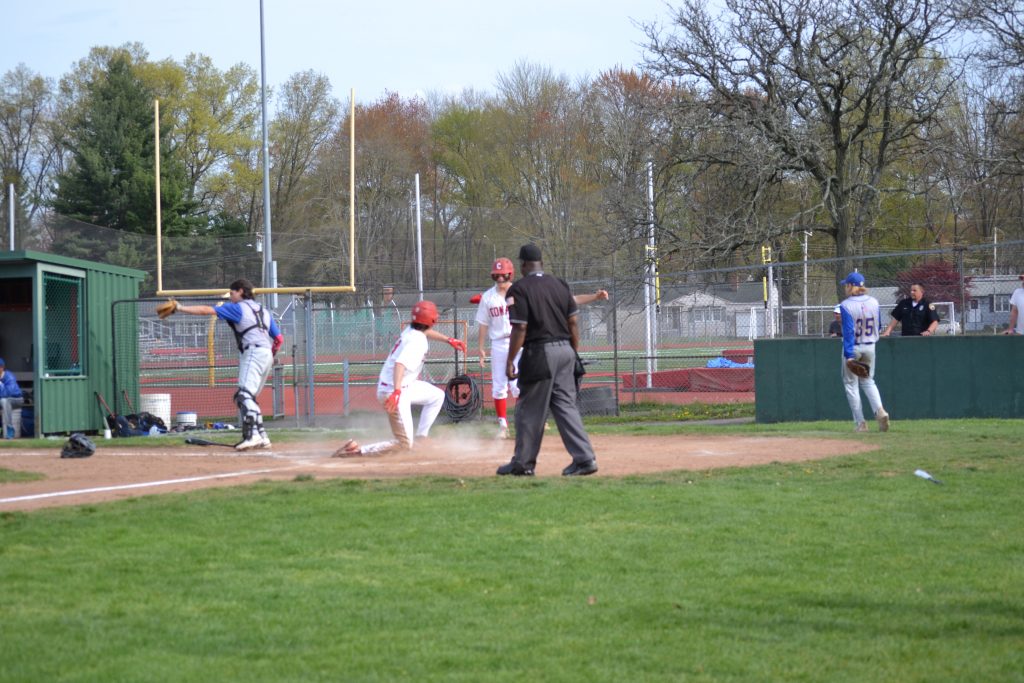 Nick Kane slides in ahead of the throw on his two-run home run. Conard vs. Seymour baseball. May 5, 2022. Photo credit: Paul Palmer

Seymour got on the board first, in the top of the first, when center fielder Jake Chacho led the game off with a triple down the left field line. He would come in to score two batters later on a fielder’s choice, and that would be all the runs for the Wildcats.

Conard answered with two runs in the bottom of the first. Michael Weiss singled, and moved to second on a freak play. Jake Samela smashed a shot ticketed to go up the middle, that hit the umpire in the center of the back. Samela was awarded first and Weiss moved to second. Kane was up next and hammered a triple down the rightfield line on a 3-2 pitch to score the runners. “I took a two strike approach to the pitch and got the barrel on it,” said Kane.

Michael Weiss of Conard beats the throw to second for the stolen base. Conard vs. Seymour baseball. May 5, 2022. Photo credit: Paul Palmer

On the mound, Kane was in control, fanning 11 Seymour batters in five innings. The only trouble he faced came in the top of the fourth when the first two batters singled, but Kane struck out the next two and induced a soft liner to second to end the threat.

“I felt good and my fast ball was working early,” said Kane.

“He is our workhorse,” said head coach Brendan Smith of his senior hurler. “We know we have a chance to win with him on the mound.”

In the bottom of the fourth Conard doubled their four-run lead using base hits, aggressive base running, and by taking advantage of some miscues by Seymour. 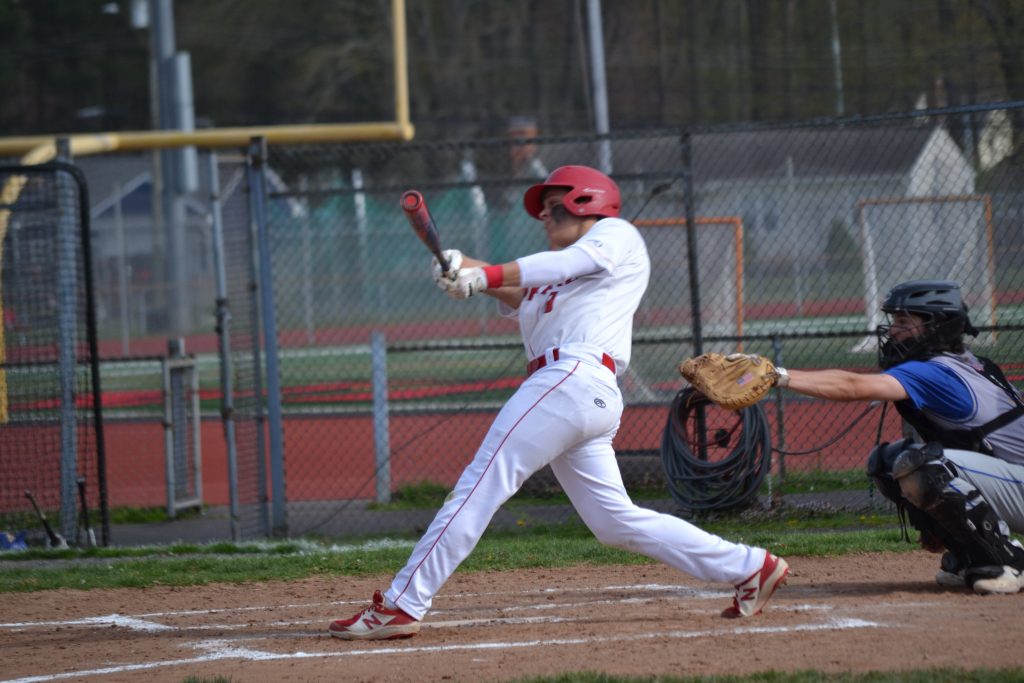 Matt Santoro follows through on his swing. Conard vs. Seymour baseball. May 5, 2022. Photo credit: Paul Palmer

Tristan Baron led off with a single and moved to second on an error. Brendan Grady then laid down a bunt that was fielded by pitcher Shane White. His throw to first was off line and stayed in play, allow Baron to score and Grady to move to third.

After a pitching change, Weiss popped up to second base, and Grady tagged and outraced the throw home. “It was his (Grady’s) choice,” said Smith. “He’s very baseball savvy and saw the fielder with his head down after the catch so he took off.”

Two batters later, Samela reached on an error and then Kane drilled a shot to deep center field. One of the unique things about the field at Conard is that there are no fences, so the ball kept rolling as Kane raced around the bases, beating the throw home for the HR and an 8-1 lead.

“We like to play fast and put pressure on the other team,” said Smith. “We have confidence with our bats.”

After sitting Seymour down 1-2-3 in the top of the fifth, Santoro led off with a triple to right, and when the throw to third went wide, he was able to score. John Kane followed with a double to center and Baron walked. Then, with one out, Weiss grounded to short, and the throw was offline to first, allowing two runs to score and ending the game 11-1.

“Our motto is every day is opening day and if we play our style we have a chance to win,” said Smith.

Kane threw 59 pitches over the five innings, giving up just three hits and one walk.

Smith’s team is now 9-3 on the season and has some big games ahead. After a Monday home game with Bristol Central the Chieftains travel to take on 9-1 RHAM on Tuesday, before hosting 10-2 Southington on Wednesday and wrapping up the week on Friday at Avon.

“We knew early on we had great chemistry,” said Smith of his team that features seven seniors. “It has felt different than ever before. There is something different about this team and how they get along.” 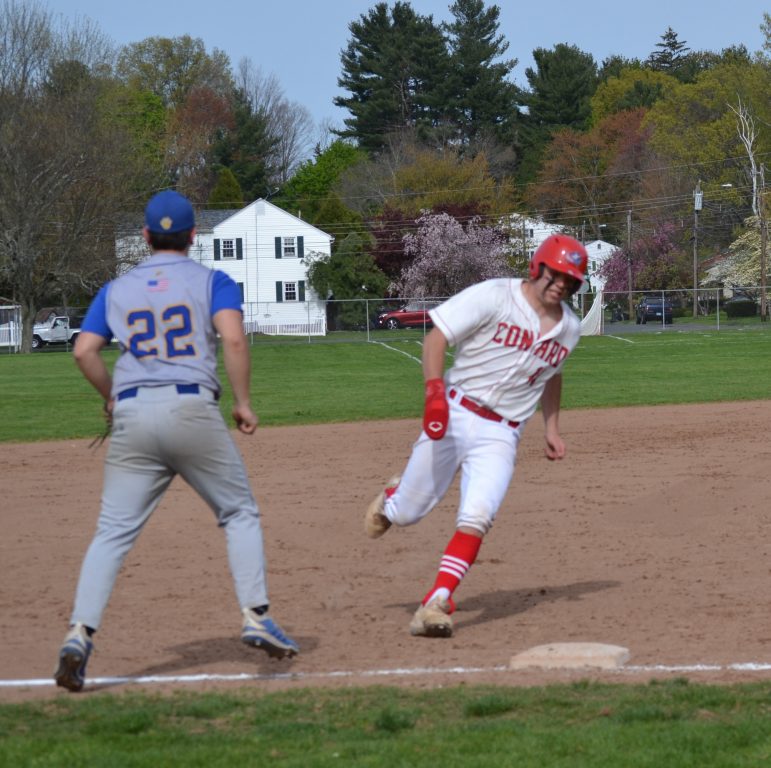