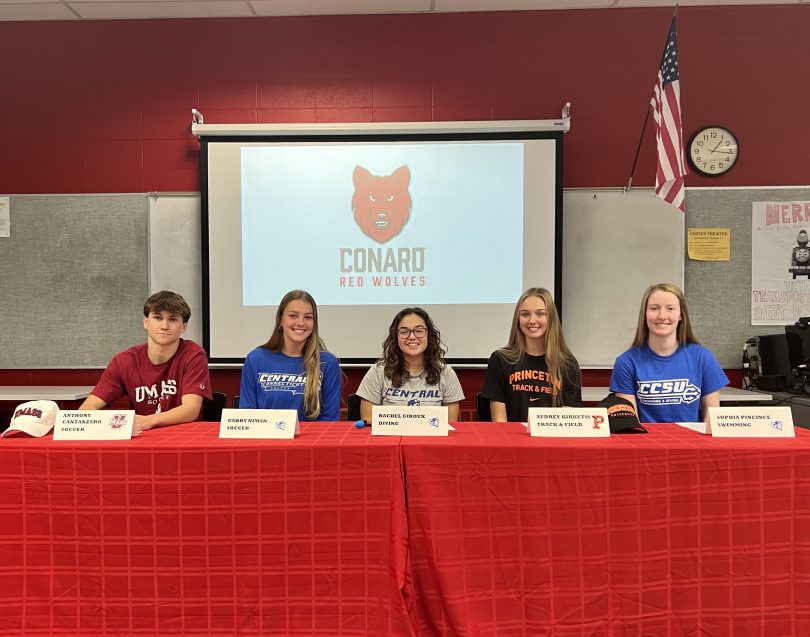 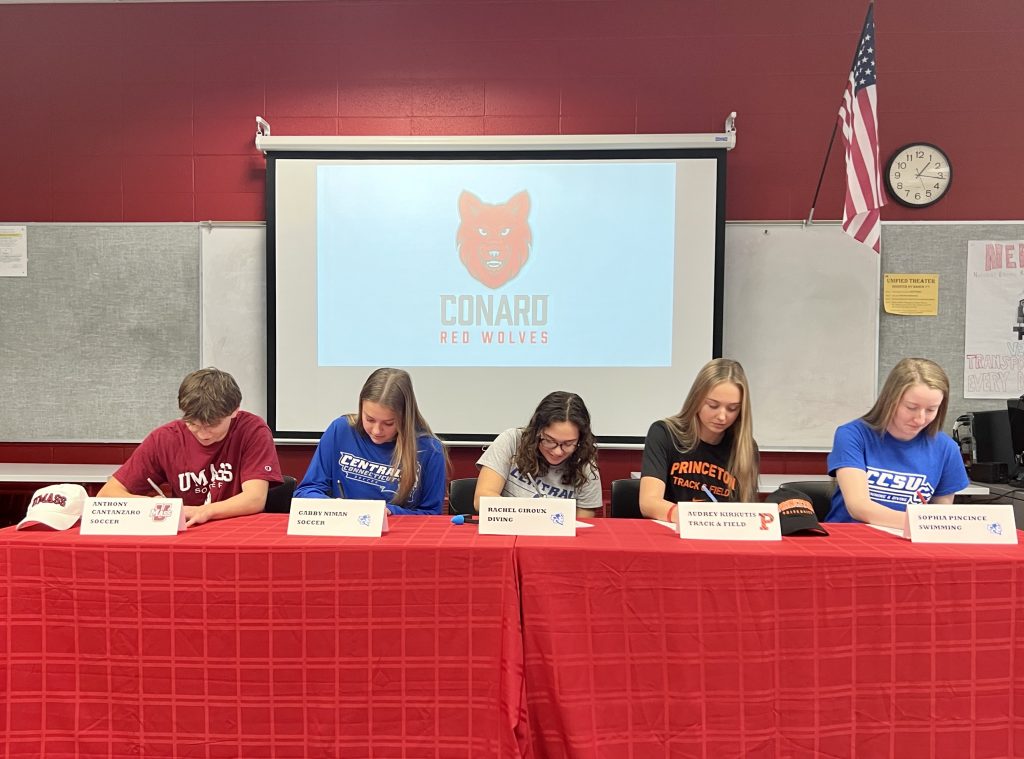 Five members of West Hartford’s Conard High School Class of 2023 gathered with their families, friends, teammates, and coaches Wednesday afternoon to sign national letters of intent signifying their commitment participate in sports at the Division I collegiate level.

Athletic Director Jason Siegal congratulated all of the students. “I know how much hard work you have put in over the last 1 to 18 years. Equally, your families have put in time, resources, travel to support you,” he said. “You’ve had awesome coaches along the way and some of them are here today. … I’m just super, super happy, proud of you, and I can’t wait to follow your careers at the next level,” Siegal said, noting that some of the students won’t be very far away.

“Keep doing your thing because you guys are going to make Conard and West Hartford proud, no doubt,” said Siegal.

Coaches for all the athletes took the opportunity to share a few words. 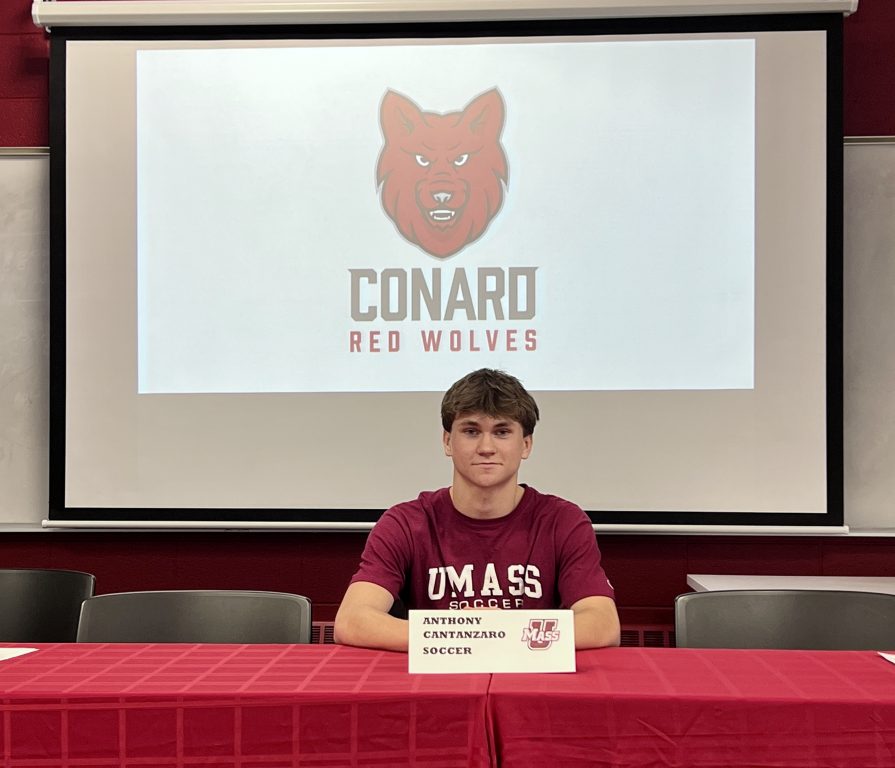 “I only had one year to coach Anthony, but I did spend three years creating scouting reports against him,” said Becca Lewis, who took over as the boys head soccer coach at Conard this year but previously was an assistant coach at crosstown rival Hall.

She noted that Catanzaro is a fantastic player, played virtually every minute all season and had a great year with 14 goals and four assists, and has the ability to make people around him better with his work ethic and skills. 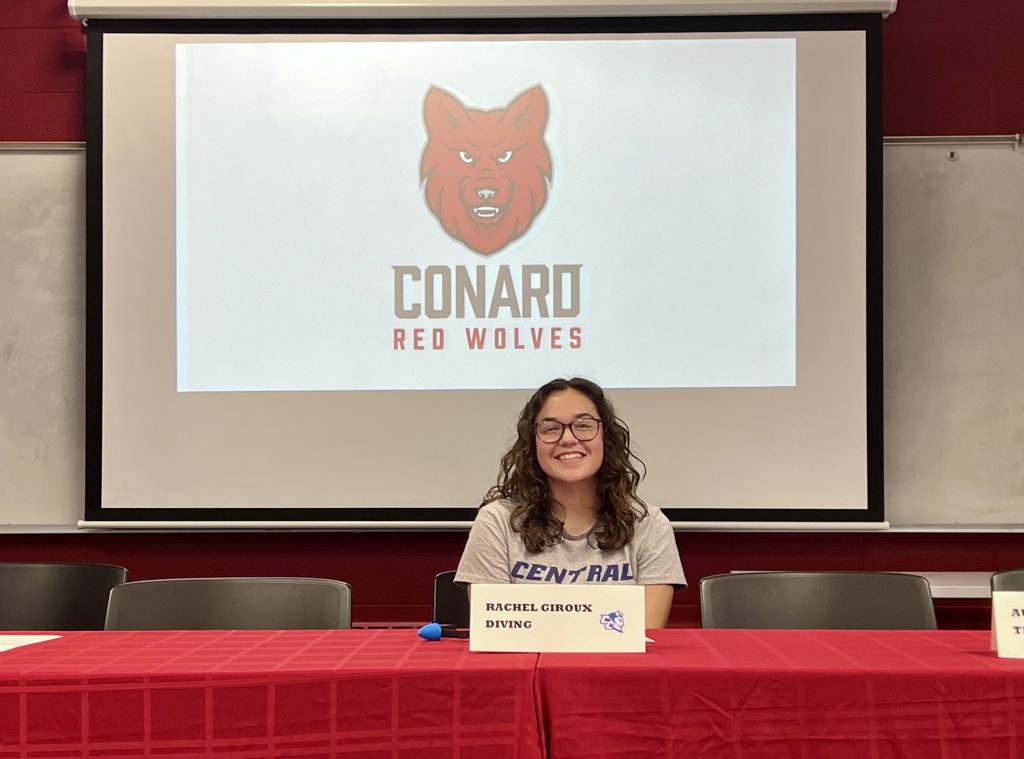 Juan Dominguez, who is the diving coach at Conard as well as Hall, said Giroux is “just an amazing, amazing, amazing person,” and has worked so hard over the years. “She’s blossomed into a great leader.”

He added it’s very cool that she and Pincince will get to continue to be teammates at Central. 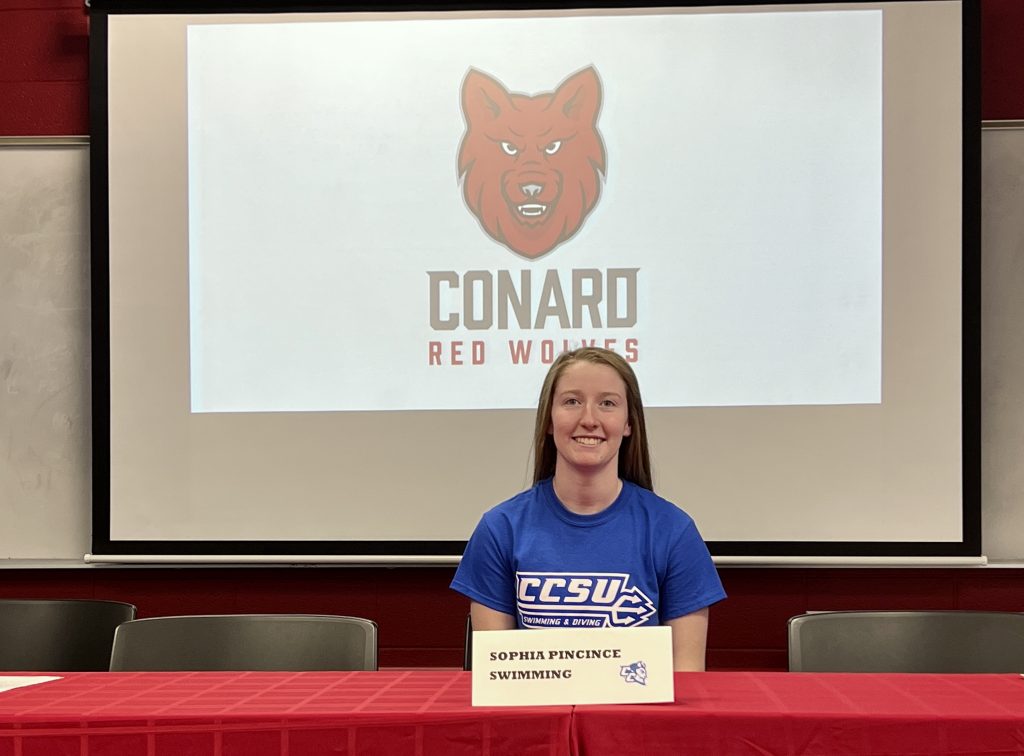 Swim coach John Smachetti said Pincince has been a varsity team member all four years, and all-academic, all-conference, and a state meet qualifier. “But I think most important is the leadership and the unselfishness she shows every day at practice,” he said.

Pincince had offered to give up her spot in a relay in state competition to allow another swimmer to participate, and while she ultimately didn’t have to, that’s the type of quality she brings to the team leadership, Smachetti said. 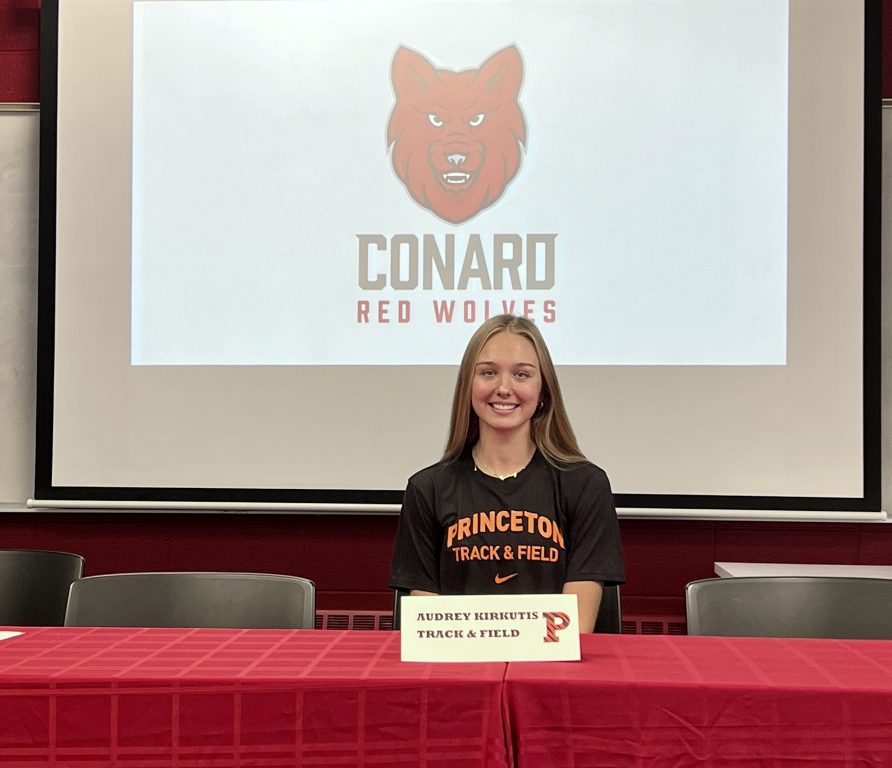 Matt Redman, who coaches the jumpers for Conard’s indoor and outdoor track and field teams, said he recruited Kirkutis to be a high jumper as a freshman because she was tall. He set up a bar in Conard’s back gym where Kirkutis and some others has the chance to try jumping over it.

“From the day that Audrey did that, I put up a bar at the state qualifying height and she was able to do it first try, and I thought that was the coolest thing because she was a freshman,” Redman said. “She didn’t really know any better. She had no idea that the height was state qualification but I was like, this girl has serious potential.”

Kirkutis went on to win the class meet as a freshman and to build confidence, and she works very hard, Redman said, including on her own and in the offseason at Edge Fitness, where other gym members know her as the “jumping girl.”

She won the New England competition last year, and placed in national meets. “She’s definitely the best jumper I’ve ever coached,” Redman said. And those skills have given her the opportunity to attend a school like Princeton.

James Redman, who is Matt’s brother, is the head girls indoor and outdoor track coach. “You’re sitting here because of your hard work, your passion for the sport, and honestly I know that all of us couldn’t be more proud,” he said to all the letter signers. 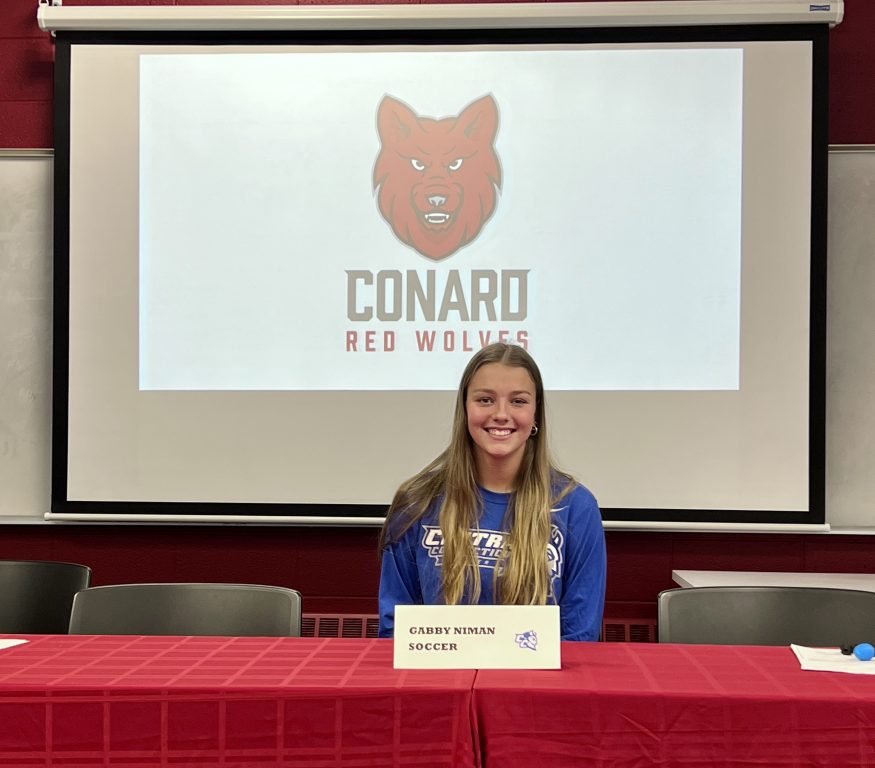 “I had the privilege of coaching Gabby the last two years,” Conard girls soccer coach Liz Tracy said. She noted Niman’s growth as a player, a teammate, and a captain.

“She sets an awesome example for the younger girls. I’m so glad she’s staying nearby so we can watch her … We’re really excited and so proud of you,” Tracy said. 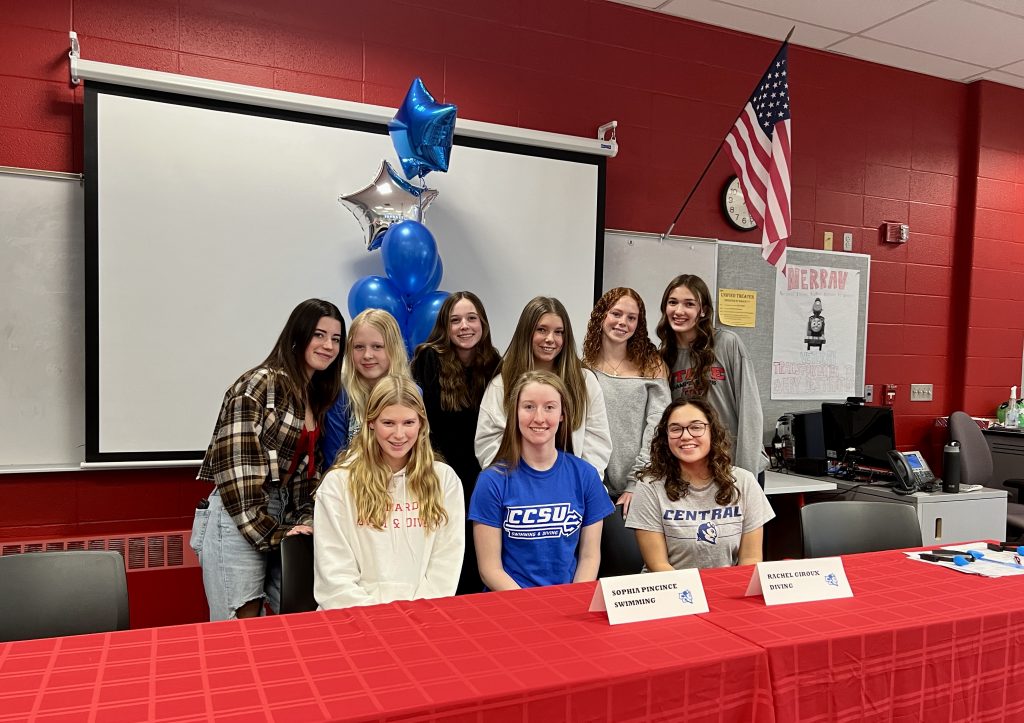