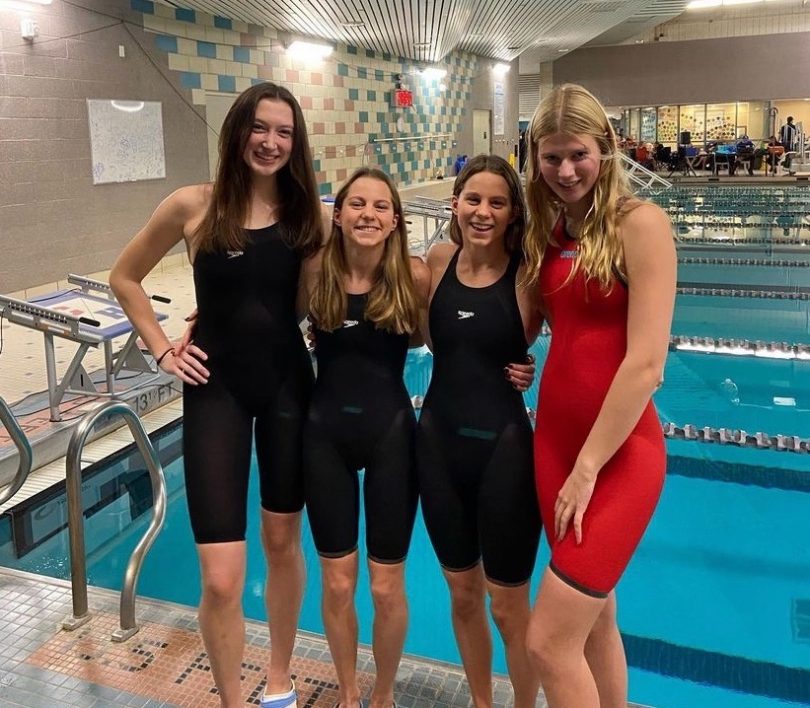 Conard Girls Swim & Dive competed in the Class LL State Finals Tournament on Wednesday evening with an outstanding effort which culminated with a fourth place finish in the highly competitive division, behind the winner, Ridgefield, runner-up Greenwich, and fellow CCC team Glastonbury which placed third.

The evening started off with the team of Aspen  Rosner (senior captain), Tess Sherry (sophomore), Liv Sherry (sophomore) and Claire Dombrofski (senior captain) breaking the school record in the 200 Medley relay, finishing with a time of 1:50.69.  The record was last set in 2015 by the team of Clara Capone, Bridget Williams, Annie Kirklin, and Maria Armillei (1:51.52).

In the next event, Meghan Jo (sophomore) and Jane Harhay (junior) both posted personal best times in the 200 Freestyle.  Rachel Mathews, Liv Sherry, and Tess Sherry followed with solid performances in the 200 Individual Medley, with Mathews finishing 23rd as Liv (seventh place) and Tess (fifth place) both had personal best times that are advancing them to the State Open. Rosner and Dombrofski closed out the first half of the meet in the 50 Freestyle with 11th and 12th place finishes in the event.

After the break, Mathews, Conard’s lone butterfly entry had a personal best time finishing 22nd. In the 100 Freestyle, Rosner, Dombrofski, and Gracie Lowney (freshman) teamed up for 10th, 14th and 19th place finishes.

After a short break, the team of Cecelia Peck (freshman), Claire Haverly (freshman), Jane Harhay, and Dombrofski finished with a time of 1:44.23 in the 200 Freestyle relay, just fast enough to grab the 24th and last spot at the Open.

In the 100 backstroke, Conard was led by two freshmen, Rosie Alonzo and Gracie Lowney as they placed 21st and 22nd.

The 100 Breaststroke saw all four swimmers advance from Saturday to Wednesday with Ella Switzer (senior) and Ella Hall (freshman) placing 20th and 15th, setting up the championship heat with Liv and Tess Sherry. Tess finished second, earning All-State honors, while Liv finished fourth.  Both will swim again at the State Open. Tess’s time of 1:05.75 was just 0.29 seconds from the school record. Both girls will be chasing that record at the Open.

The meet closed with the 400 Freestyle relay where Rosner, Jane Harhay, and Liv and Tess Sherry dropped 3.5 seconds from Saturday and will look for another 3-second drop at the Open as they chase the school record in that event.

State Open diving is Thursday at Middletown where Class LL winner and school record holder Alison Colburn will compete as will teammate Gabrielle Alekshun. The swimmers will head to Yale on Sunday for the swimming Open.