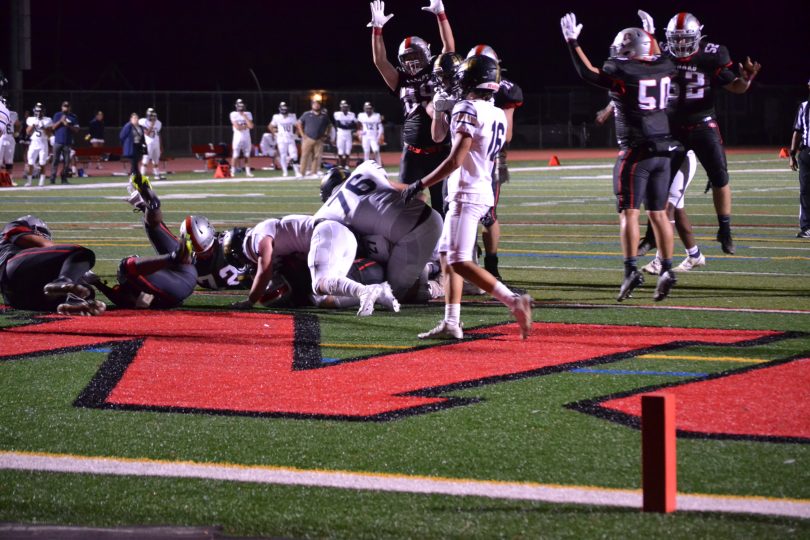 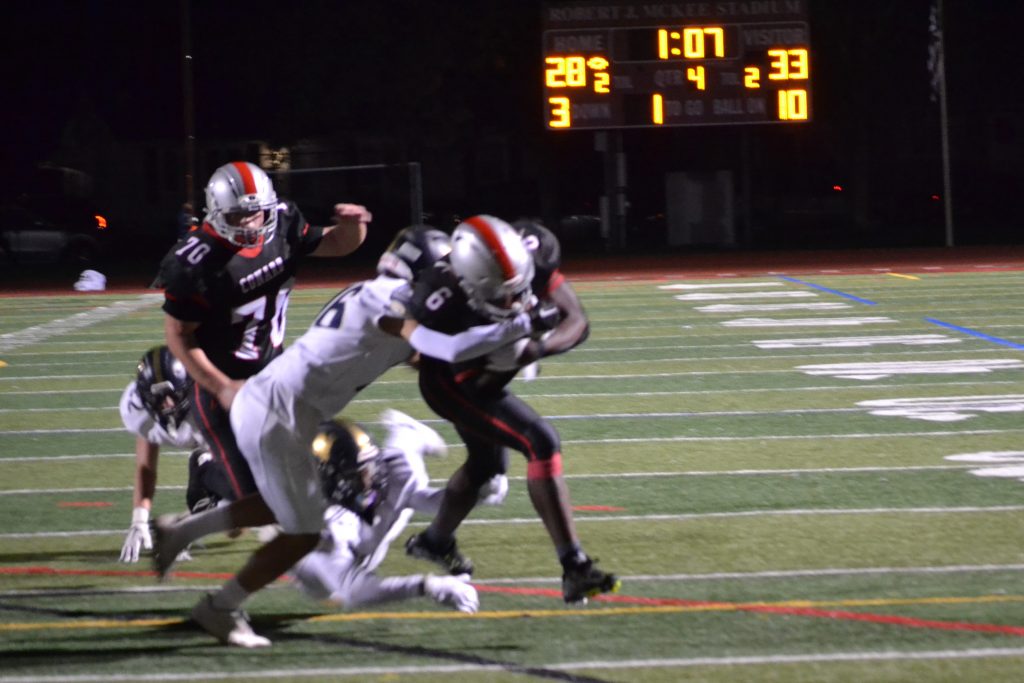 It was a rough first half for the Conard football team in Thursday night’s home football opener against Newington. The Nor’easters were moving down the field almost at will and built a 27-14 halftime lead.

Conard coach Matt Cersosimo and his players had the visitors right where they wanted them. “At the half I told them not to panic,” said Cersosimo. “I told them to keep doing our thing but do it a little better.”

His message got through, as the Red Wolves scored 29 second-half points, including the winning TD and 2-point conversion with 40 seconds to go in the 36-33 win. 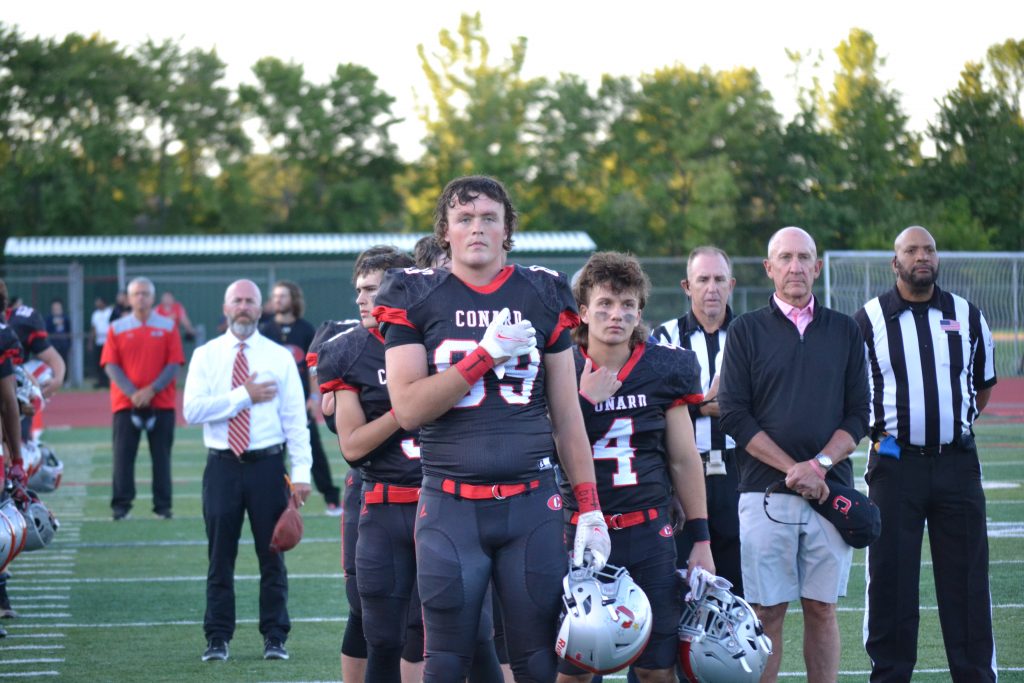 “It was kind of quiet at the half,” said Conard co-captain Declan McCann. “We knew we didn’t play as well as we could, but we believe in each other.” McCann was the spark that his team needed all night as both wide receiver and working out of the backfield.

The opening 12 minutes looked more like a track meet than a football game. Newington took the opening kick and behind the arm of quarterback Paddy Brown and the legs of running back Luciano Corvino, marched down the field for an opening TD pass from Brown to Jayden Williams less than 3 minutes into the game.

Conard junior quarterback Julian Schneider was making his first varsity start for the hosts. In his first possession, he showed no nerves, and matched the visitors’ opening drive, finishing things off with a 27-yard TD pass to McCann to tie things at 7. Newington’s Corvino would score his second TD of the game less than 2 minutes later.

On Conard’s next possession, a bad exchange between Schneider and Jayviaun Dickens led to a fumble and when the Nor’easters recovered they were set up at the home team’s 21. Brown would run it in on a keeper and with 1:20 to go in the opening quarter, Newington was up 20-7. 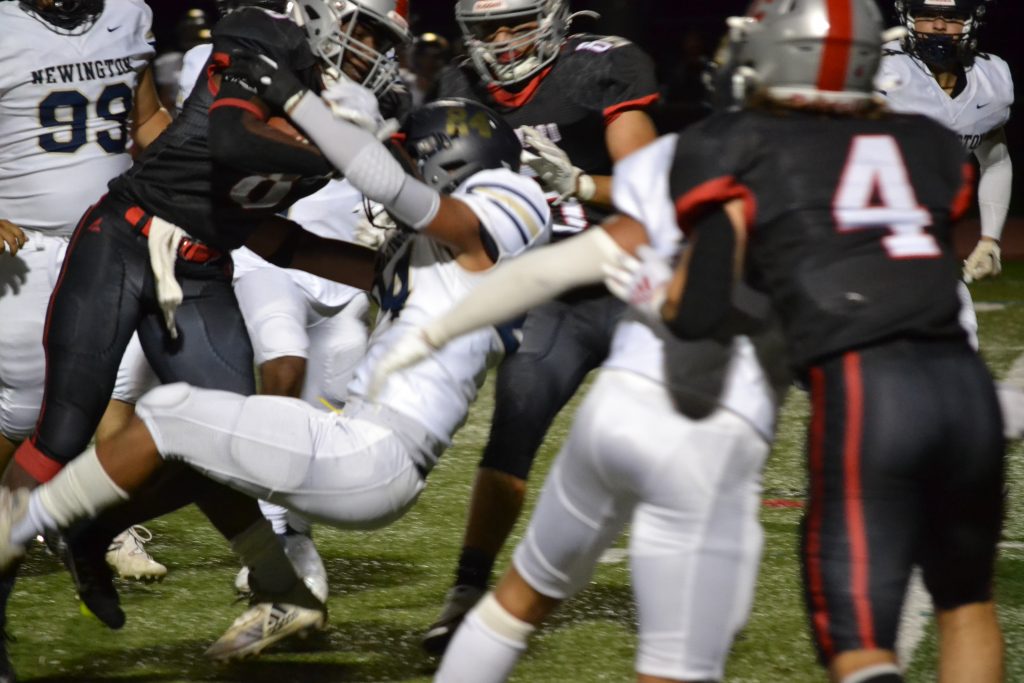 Newington would add to its lead before the break when Josiah Ross took a short screen pass from Brown and raced 50 yards to paydirt along the near sideline to give the visitors a 20-point lead. Conard would answer before the break with Dickens and Santana Edwards gaining valuable yards to set up another Schneider-to-McCann score with 1:40 to play.

After the break, Conard got the kick and got to work. With Dickens getting a large share of the calls, and McCann taking direct snaps, they were at the Newington 19. From there Edwards swept around the left side and into the end zone and the Red Wolves cut the difference to 6 after the PAT.

‘They are a two-headed monster [Edwards and Dickens] that complement each other,” Cersosimo said of his running duo. “We mix in Ben Lemieux as well.”

On the other side of the ball, it would be Corvino breaking off a 31-yard scamper into the Conard end zone with 5:35 to play in the third. In an effort to make up for the earlier missed PAT, Newington went for 2, but Brown’s pass was picked off by Trevor Tanis. 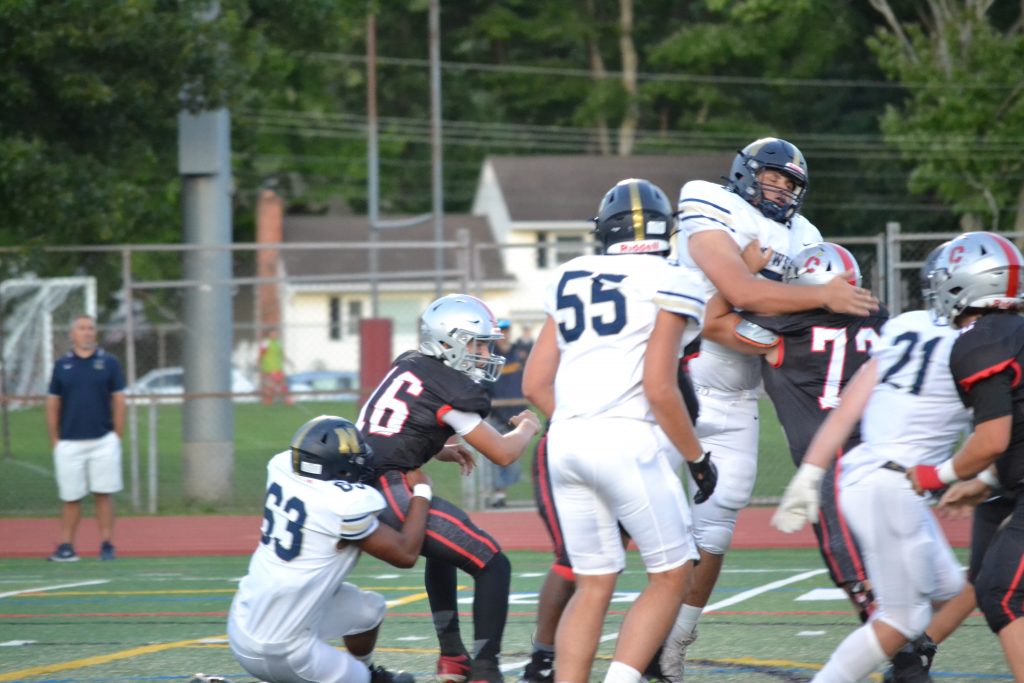 Quarterback Julian Schneider gets the throw off before Newington’s Amari Rosemind can tackle him. Conard vs. Newington football. Sept. 15, 2022. Photo credit: Paul Palmer

Newington’s defense would hold Conard on the next possession and get the ball back. But a bad snap flew past Brown and he raced to pick it up and throw under pressure. His pass was picked of by Tanis, who bought it back to the Newington 43.

Edwards shouldered the load on the next Conard possession and when he scored on a 20-yard run with 23 seconds to go in the third, Conard trailed by just five at 33 to 28.

“Resiliency is one of our core values in the program and they demonstrated that tonight,” said the Conard coach.

Holding onto a five point lead with just 12 minutes to play, Newington used short passes and running plays to burn time off the clock to start the fourth quarter. With 7:36 to go, Conard broke up a Brown pass on fourth and 4 to get the ball back in Schneider’s hands.

On fourth down, Schneider rolled out and found McCann for a first down. In the next series of downs, it was McCann taking the direct snap and fighting for the first. With 2:40 to play, Schneider launched a pass down the right sidelines to Brendan Grady who had beaten his defender. As he went up for the ball, he was interfered with, but still managed to make the catch  at the Newington 20. 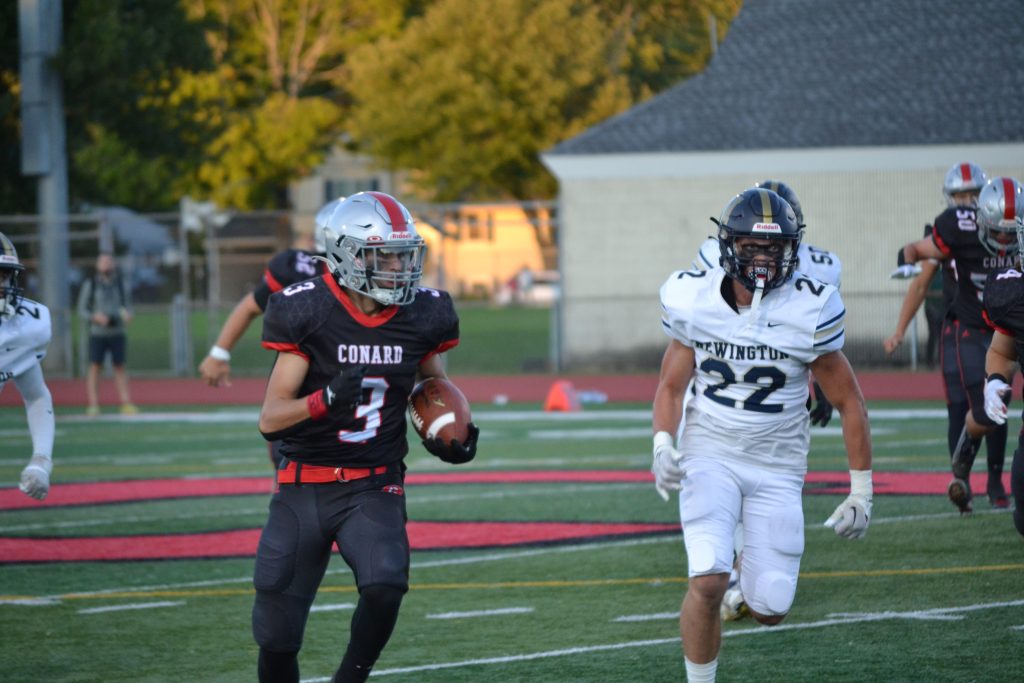 On third and 1, it was Dickens going off tackle to take the ball to the 2 yard line with just 1:02 to play. “This was a tough team, tough game, but the energy in here was crazy,” said Dickens.

After Dickens was stopped for no gain, it was McCann taking the direct snap and gashing his way into the end zone to give Conard its first lead of the game with just 40 seconds to play in the game. “I saw a hole between the defenders and just put my head down and hoped for the best,” said the senior captain.

McCann would also run in the 2-point conversion to make it a 36-33 game.

Cersosimo and his coaching staff had worked in a few trick plays in the game – a flea flicker nearly connected for what would have been an easy score, and some trick plays on kickoffs that just missed.

Now with just 40 seconds to play to secure their first win, the Red Wolves’ Connor Mangini – who had a 40-yard PAT earlier in the game – chipped a short kickoff that Newington fumbled. It was recovered by Tommy Parker, and Conard and Schneider only needed to take a knee one time, and they had won 36-33.

“I am so proud of these guys,” said Cersosimo of his team. “Julian for playing his first conference start managed the game well. I am proud of his effort.”

The Red Wolves will face Cheshire, East Hartford, and Simsbury in its next three games. For now, their coach wants them to enjoy the victory, but know there is a lot of work ahead.

“I want them to take away a great conference win,” said Cersosimo after the game. “But we still have a lot of work to do.” 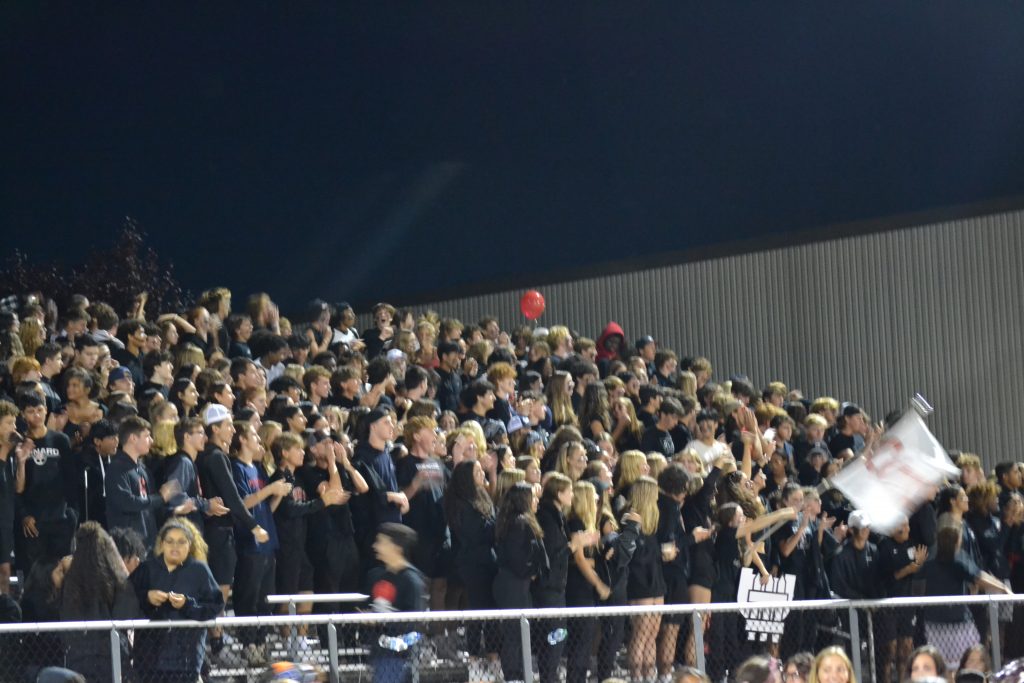 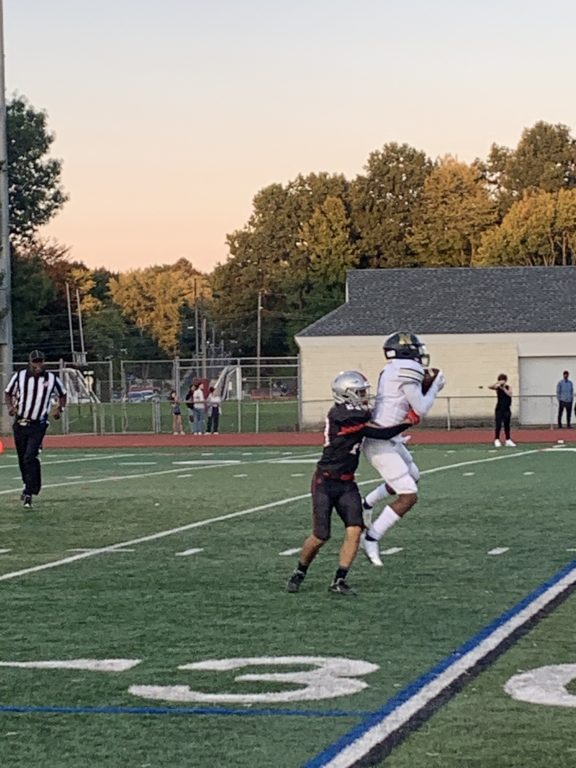 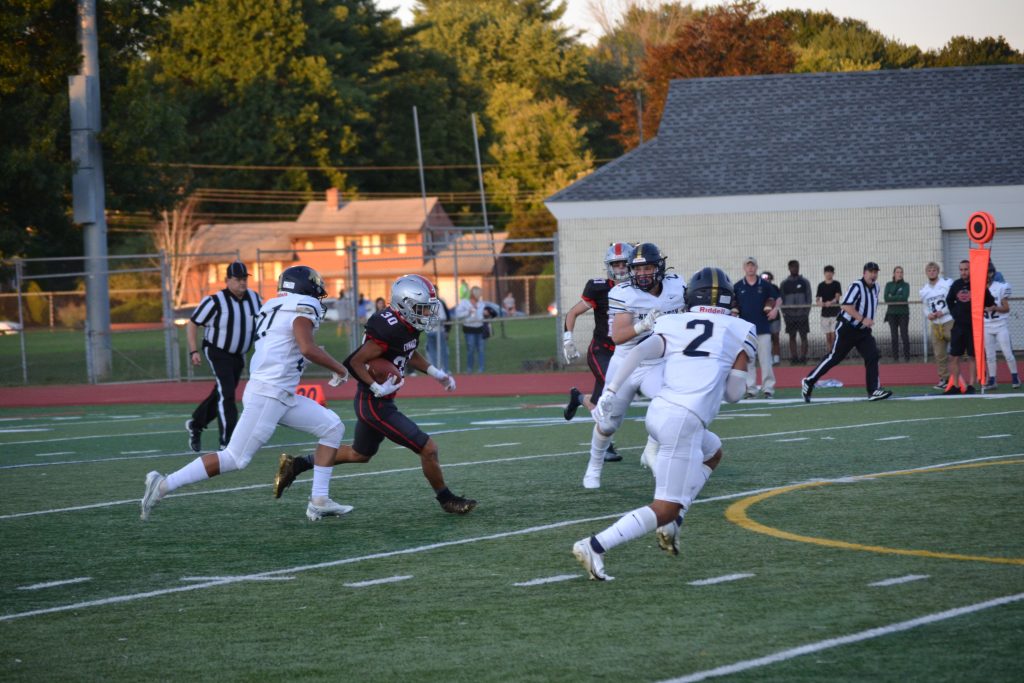 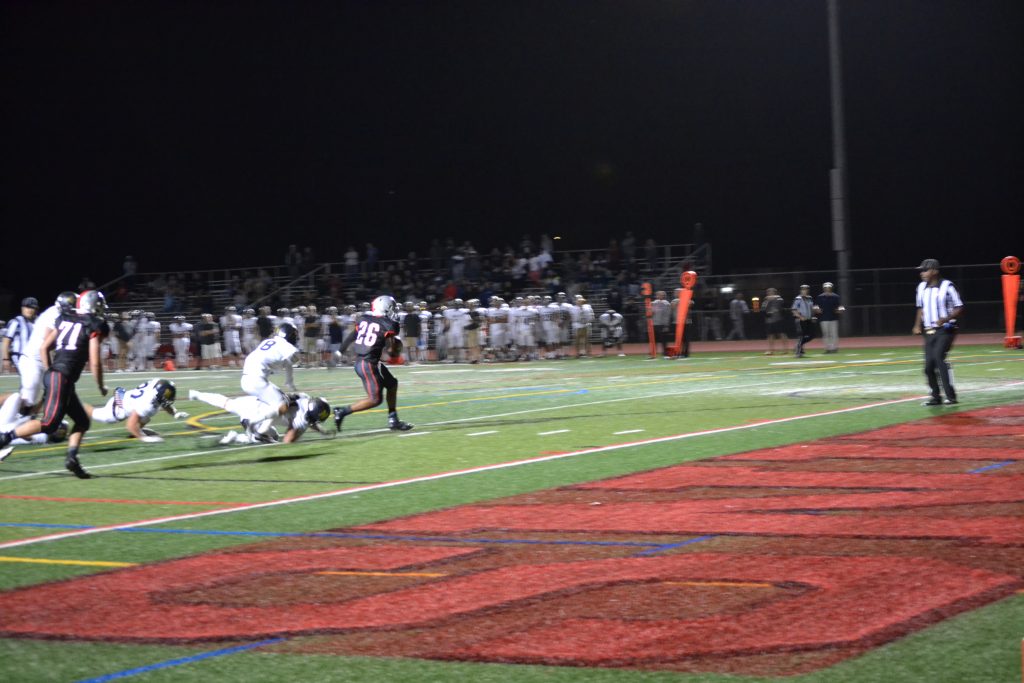 Like what you see here? Click here to subscribe to We-Ha’s newsletter so you’ll always be in the know about what’s happening in West Hartford! Click the blue button below to become a supporter of We-Ha.com and our efforts to continue producing quality journalism.        `