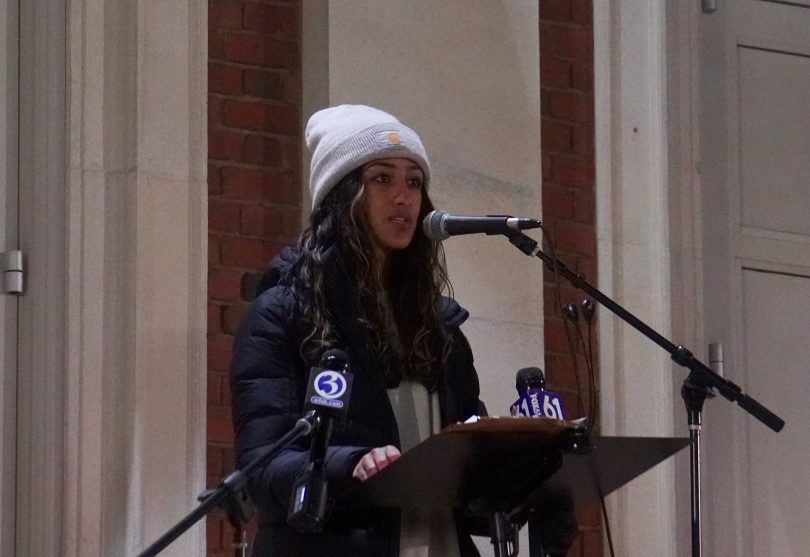 Maya Palanki of West Hartford, a senior at Conard High School, is one of two Presidential Scholars from Connecticut.

Conard High School senior Maya Palanki received a letter from Secretary of Education Miguel Cardona Thursday, naming her one of two 2022 U.S. Presidential Scholars from Connecticut, and one of just 161 students from across the country to receive the recognition.

“As U.S. Presidential Scholars, you represent that future, and the bright promise it holds,” the letter from Cardona states. “And you are a group as diverse as your dreams. Your passion, perseverance, and spirit of service, as well as your pursuit of excellence and impressive achievements, are all the more meaningful during this challenging time.”

The U.S. Presidential Scholars will be officially recognized this summer.

“We are so proud of Maya, and Excited for her to represent us, and Connecticut, at the White House,” West Hartford Superintendent of Schools Tom Moore said Thursday. “It is a special honor, and a great ceremony.”

Palanki, the daughter of Rupal Shah Palanki and Cha Palanki of West Hartford, will attend the University of Pennsylvania in the fall.

Palanki was honored several months ago as one of 77 students worldwide to receive a perfect score on the Spanish Language and Culture Advanced Placement Exam. She has been involved in myriad activities in West Hartford, and last year launched the “Hope for Human Rights” fundraiser to support local nonprofits. In January 2022 she spoke at a “Vigil for Democracy” in West Hartford Center, and she previously spoke at a rally for the AAPI community in West Hartford in 2021.

“Connecticut is home to some of the best schools in the nation, and that is due in large part to the incredible teachers and faculty we have in our state who dedicate themselves to providing our students with the highest-quality education possible,” Gov. Ned Lamont said in a statement Thursday. “I offer my sincere congratulations to Aditya and Maya on this extraordinary national recognition. They represent some of the very best of Connecticut, and I applaud their perseverance and drive.”

“We are so proud of all of Connecticut’s students for their persistence throughout the past two years,” Commissioner of Education Charlene Russell-Tucker said. “For Maya and Aditya, this is an exceptional honor that highlights their tremendous achievements. I am honored to offer the department’s congratulations and wishes for continued success.”

This is the 58th class of U.S. Presidential Scholars, and this year’s class was chosen from among 3.7 million students expected to graduate from high school this year.

Palanki, along with Eashwar Krishna of Hall High School, were among the roughly 5,000 finalists identified earlier this year. Just two students from each state are selected along with two each from the District of Columbia, Puerto Rico, and U.S. families living abroad. There are also 15 U.S. Presidential Scholars chosen at-large, 20 scholars in the arts, and 20 scholars in career and technical education.

In 2012 Regan Considine of Hall High School was named a U.S. Presidential Scholar.