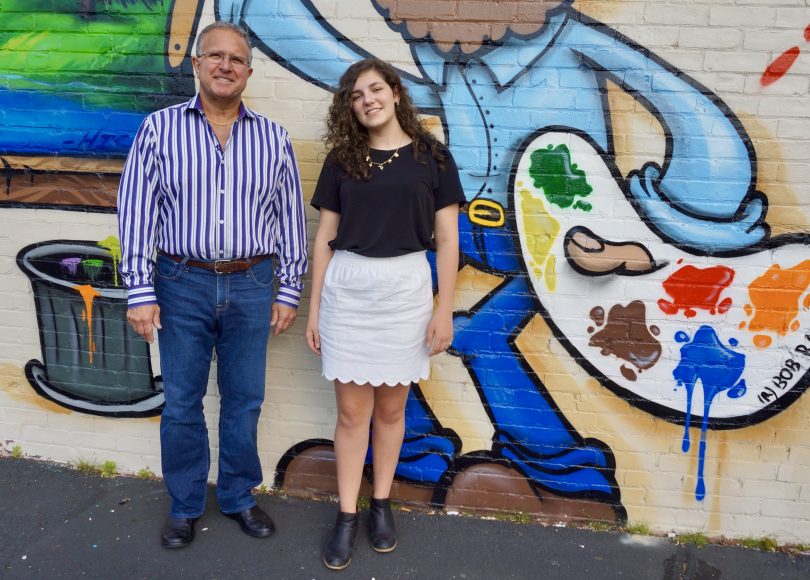 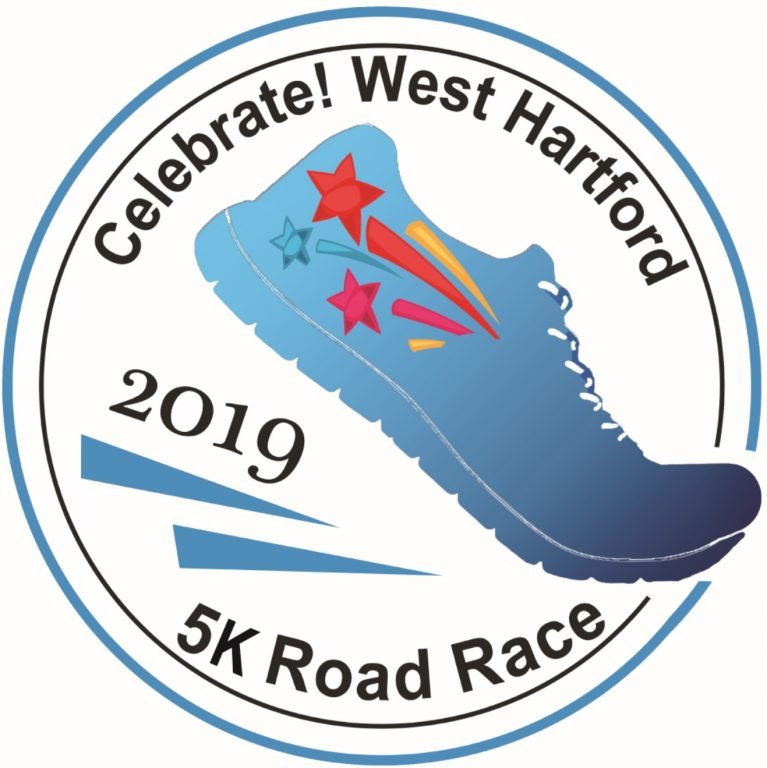 Conard student Gabriella Zhalov had spent at least a week trying to come up with a design to enter in this year’s Celebrate! West Hartford Road Race graphics contest, but she wasn’t satisfied until she had the idea of placing a blue sneaker inside circles.

“It was crazy, when I first heard my design was picked I didn’t believe it,” said Zhalov, a sophomore in Jim Genovese’s graphics class at West Hartford’s Conard High School. “Then I realized the magnitude of it, and it’s amazing.”

There will soon be approximately 600 people walking and running around around town wearing golden-colored Celebrate! West Hartford Road Race shirts emblazoned with Zhalov’s design. Shirts are guaranteed to all who register by May 22.

“I really like graphics, and I like to work on the computer,” said Zhalov. This was the first year she’s taken a graphic design class, but she has taken many art classes, both at school and through outside organizations. She said she plans to take more graphics classes at Conard next year.

As a prize for her design, Zhalov was given a $250 gift certificate to Jerry’s Artarama as well as a “grab bag” of some other items, presented by store owner Jeff Shoham on Tuesday afternoon. This is the fourth year that the shirt design contest has been held, and Shoham has sponsored it each year.

Graphic design students from both Conard and Hall are invited to participate.

The initial designs are all submitted in digital form. The selection process is all done “blind,” and West Hartford organizer Linda Geisler said she vetted the initial submissions before passing about 10 designs to the 10-member road race committee – most of whom are runners – who voted for their top choices.

“You had the most votes,” Geisler told Zhalov. 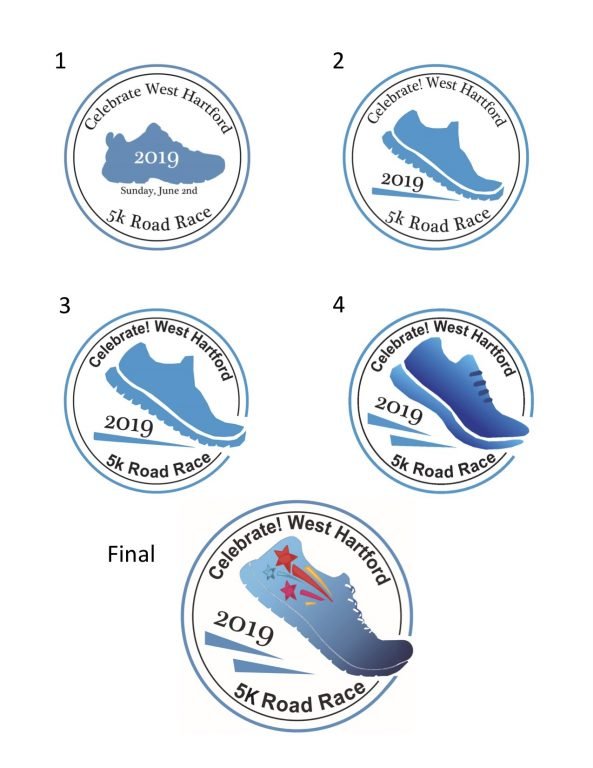 After the winning design is chosen each year, the committee makes some suggestions before it’s finalized. Zhalov worked with the committee, and tweaked her original submission based on their suggestions, and then Amy LaRose, a graphic designer who works for West Hartford Public Schools and creates the posters for Celebrate! West Hartford each year, completed the process by adding some stars to the sneaker.

“My idea was to add our ‘Celebrate!’ stars to the sneaker, to make it a recognizable as our ‘Celebrate’ logo, only it is on our sneaker,” LaRose said. This way it’s distinct as a “Celebrate” sneaker rather than a Nike or Air Jordan sneaker, she said.

According to Geisler, the t-shirt design contest is a way to combine two major components of the festival – the arts and crafts as well as the run. “We love to get as many people involved as possible,” she said.

Zhalov is the first female to win the contest, and said she’d definitely consider entering again next year. She said she’s “not really a runner,” but is considering walking the race.

Outside of school, Zhalov said she plays tennis, and is in a book club. She’s also taking private art lessons, and really enjoys pencil as well as pen and ink drawing. She moved to West Hartford from Virginia in 2010, and previously attended Braeburn Elementary School and Bristow Middle School.

Claire Zhalov, Gabriella’s mother, accompanied her daughter to Jerry’s Artarama to pick up her prize. She said it was “really great for her to see the professional process” of the design’s evolution.

The 32nd annual Celebrate! West Hartford Road Race will be held on Sunday, June 2, 2019. The starting times are earlier this year than they have been in the past, with the Kids Fun Run beginning at 8 a.m., followed by the 5K at 8:30 a.m.

Registration for the 5K is $27 until May 22, and participants must register by that date to guarantee receipt of a road race shirt with Zhalov’s design. Fees will increase to $32 on May 23. The Kids Fun Run is $5.

Visit the Celebrate! West Hartford website (www.CelebrateWestHartford.com) for more information about the race, including the link to registration, and for details about other festival activities.