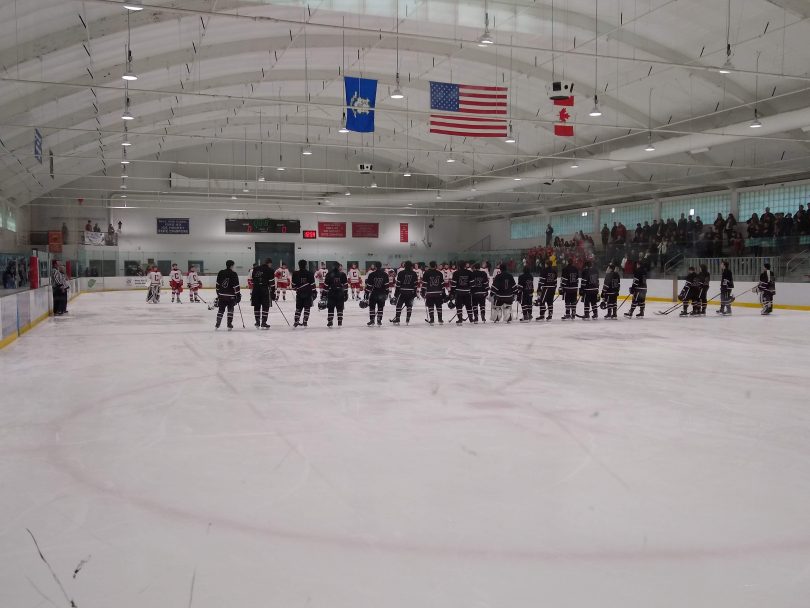 Falling to 0-3, the Conard hockey team is still looking for its first win under new head coach Stephen Hetherman.

“When the kids play hard, compete for loose pucks, that’s when we score,” said Conard head coach Stephen Hetherman. “We had large periods of inconsistency – meaning lack of effort – and that’s when we lose.”

Mason Sullivan found the puck among a swarm of North Haven players crashing the net to put the Indians ahead 1-0 with 2:18 left in the first period.

North Haven added consecutive goals from Thomas Guidone and Nicholas Howlett at the 3:08 and 2:17 marks in the second period to go ahead 3-0.

🎥: Thomas Guidone's goal to give North Haven a 2-0 lead near the 3-minute mark in the second period. #cthk pic.twitter.com/RHrBEsvloh

Owen Fernandez (goal, assist) scored for Conard (0-3) to cut the margin to 3-1 with two minutes remaining in the second period, but the Chieftains were unable to draw any closer in the third.

Owen McGoldrick (goal, assist) found the net for Conard 11 seconds later to make it 6-2. Donald Funaro and Michael Anquillare added goals in the last 2:30 of the game for North Haven.

Taking over the program this year, Hetherman said the team is adjusting to a new coaching staff and a different style of play, attributing to its slow start.

“It’s a new coaching staff teaching the kids new structure in all three zones, and the kids are learning it,” said Hetherman. “They’re all good kids. They all want to learn. They all want to be better. No one likes to be [winless], but as Bill Parcells likes to say, ‘You are what your record says you are.’”

Hetherman said Fernandez and McGoldrick – who led the Chieftains with two points each – are two of the more talented players on the roster and will have a significant impact on the success of the team.

Conard will take on Northwest Catholic (2-0) in Simsbury on Thursday at 4 p.m.