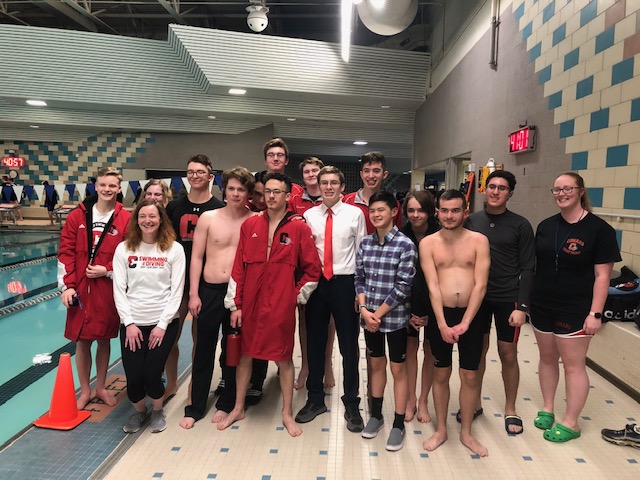 The Conard and Hall boys swimming and diving teams competed on Tuesday, Feb. 25 at a packed Cornerstone Aquatics Center in West Hartford. 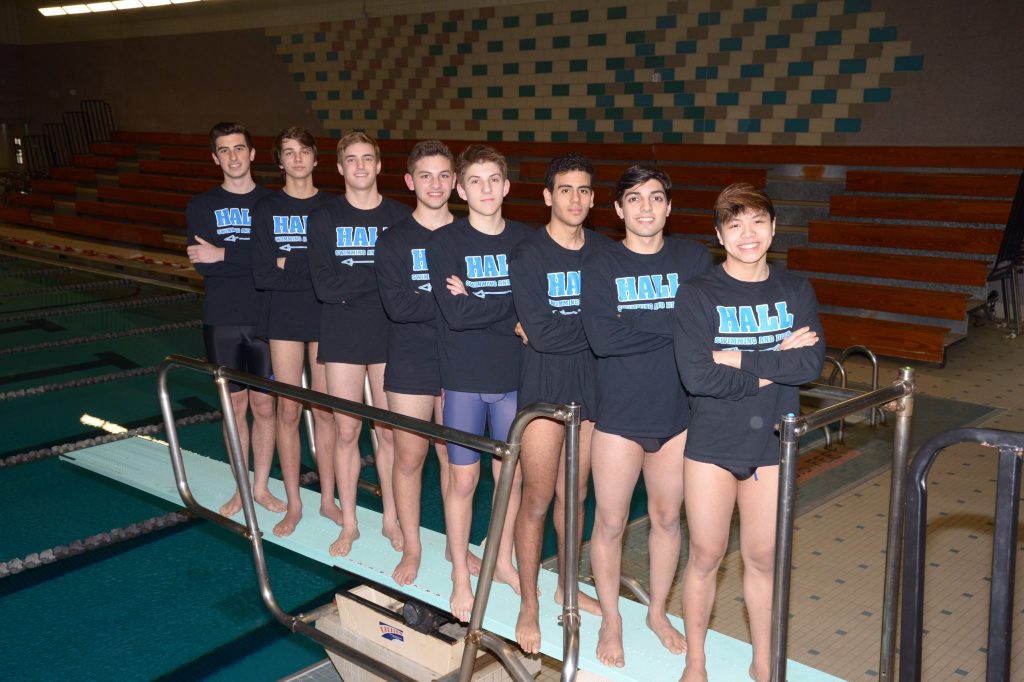 Heading into Tuesday night, the six seniors on Conard’s swimming and diving team had never experienced the pain of losing to crosstown rival Hall, and more than anything they wanted their four-year run to end with one last victory.

Two of the three previous meetings had come down to the last relay, and Tuesday night was poised to end in the same dramatic fashion.

Hall answered back with Connor Skarzynski, Facundo Calione, and Michael Neff finishing first, third, and fifth in the 200 Freestyle, followed by Sun and Dominguez combining for first and third in the 200 Individual Medley, putting Hall up 25-21.

A surprise 1-2 finish in the 50 Freestyle by Conard senior Ben Arky and Seymour pushed the score to an even 31-31 at the diving break.

The divers for both teams put on a spectacular show for the crowd, with Hall divers Jonah Genser and Ryan Mendoza and Conard’s junior Max Langweil all vying for the first place spot. Ultimately, Genser and Mendoza edged out Langweil and Conard’s newcomer to diving, sophomore Daniel Kamin.

The two teams split points in the 100 Butterfly evenly, with Flores taking first place ahead of Raisner and Mitchell Baboff, Belyaev finishing fourth, and Carter Morton of Hall securing the fifth place point.

In the final individual event of the night, the 100 Breaststroke, Belyaev, freshman Jeff Rosborg, and senior captain John Zehr finished first, third, and fifth – setting Conard up to need only a second place finish in the 400 Freestyle Relay to secure the win.

The combination of Seymour, Switzer, Belyaev, and Arky finished first in the event, taking 8 points, while Hall finished second and third, making the final score for the night Conard 99, Hall 87.

Both Conard and Hall swimmers and divers will represent their schools at the Class L state tournament that begins Saturday, March 14.