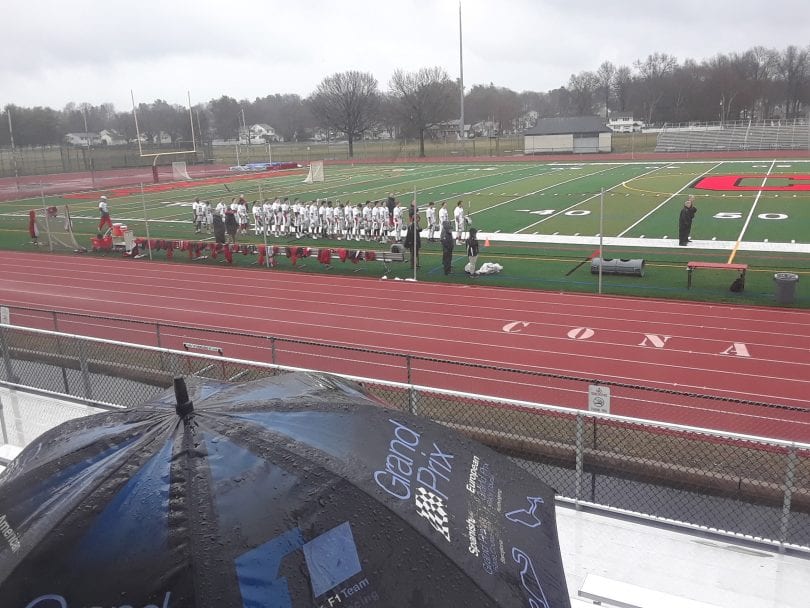 The Conard boys lacrosse team started hot and cruised to victory over South Windsor in its season opener.

Luke Serdechny (four goals, one assist) and Ben Hollerbach (four goals) followed with five and four points, respectively, after a Monday morning snowstorm pushed the contest to a cold and rainy Tuesday.

“I think everyone was really excited to go,” said Conard head coach Matt Cersosimo. “We were supposed to play yesterday, but it got postponed to today. … We had a couple scrimmages, but nothing’s like game time.”

The Chieftains scored early and often, notching their first goal at the 10:54 mark in the first quarter on a shot from O’Connor.

Conard followed with four more goals in less than five minutes, including a hat trick by Serdechny to go up 5-0 over the Bobcats with 6:26 remaining in the quarter. Midfielder Gabriel Suarez’ excellence on faceoffs gave Conard immediate offensive possessions, which the team wasted no time turning into goals.

“Any time you create an offensive possession through a faceoff, that’s a huge momentum swing, especially just coming off of a goal,” said Cersosimo. “I was really proud of how our guys attacked our ground balls and were able to get the ball on our sticks and get the ball moving, and when we had transition, we were able to capitalize.”

South Windsor got on the board with a goal from junior attacker Connor Smith – the only Bobcat to score more than once against Conard – with 3:40 left in the first quarter.

O’Connor quickly responded with three goals of his own in the final 2:21 of the first period, giving the Chieftains an 8-1 lead and the game-winning goal. Shane Carr joined the scoring party late in the second quarter with a goal to put Conard up 12-3 going into halftime.

Grant O’Connor joined his brother in the goal column at the 10:59 mark in the third quarter to give the Chieftains a 13-3 lead. Hollerbach tallied his second and third goals of the contest, putting Conard up by 12 and keeping the clock running with 9:27 remaining.

South Windsor started a 3-0 run at the 5:20 mark to trim a 16-3 advantage to just 10 goals, but Conard matched it with one of its own over the third and fourth quarters.

With the win, the Chieftains improve to 1-0 on the season and will host Daniel Hand (Madison) on Friday at 4:30 p.m.