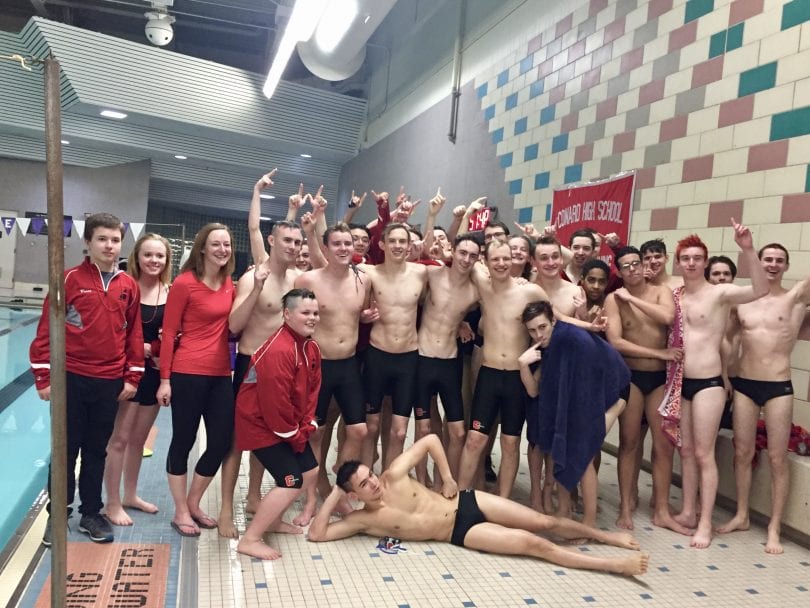 Heading into Tuesday night’s final meet of the season the Chieftains (12-1) and Warriors (8-4) were both 4-0 in the CCC West and competing for the conference title, and eight first-place finishes in the 12 events were enough to propel the Chieftains to a 93-87 win and their first CCC West title since the 2014-2015 season.

Conard also outscored Hall in the 50 Freestyle with Arky, Comrie and Roy combining for a 2-3-4 finish. Coming out of diving Conard led 51-27.

Hall outscored Conard in the 100 Backstroke with Patrick Keith, Ryan Arnold, and Kobe Dominguez finishing second, third, and fourth, but Conard’s 1-3-5 finish by Roy, Lenny Belyaev, and Justice Seymour in the 100 Breaststroke secured the Chieftain’s victory.

Conard coach Jennifer Pollard was very happy with how her team performed. After the meet Pollard said, “The team did very well tonight. On paper I knew we had the edge, but I told my team before the meet that the normal rules don’t apply at the Conard-Hall meet because it pushes everyone to levels they didn’t think were possible and you often see incredible times from people you wouldn’t expect. Tonight was no exception and both teams had really good swims and I’m glad we were able to send our seniors off with a CCC West title.”