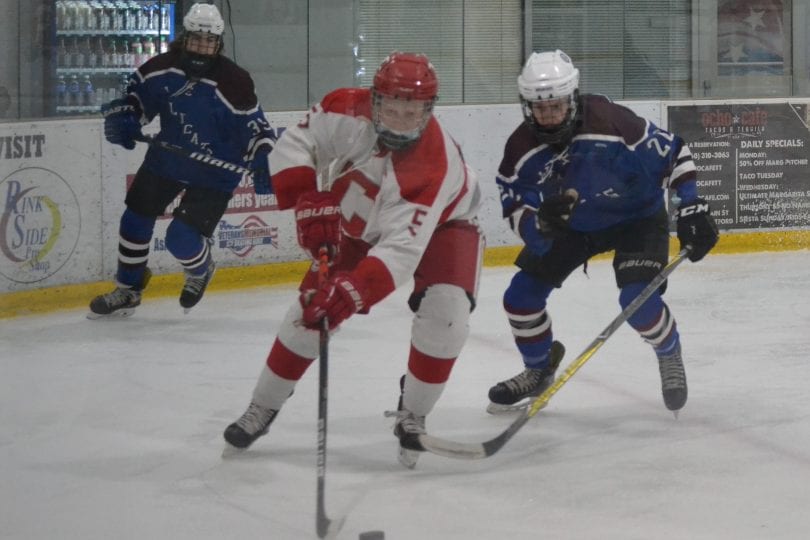 West Hartford’s Conard High School has qualified for the CCC tournament and will face Tri-Town on Monday. [Updated] 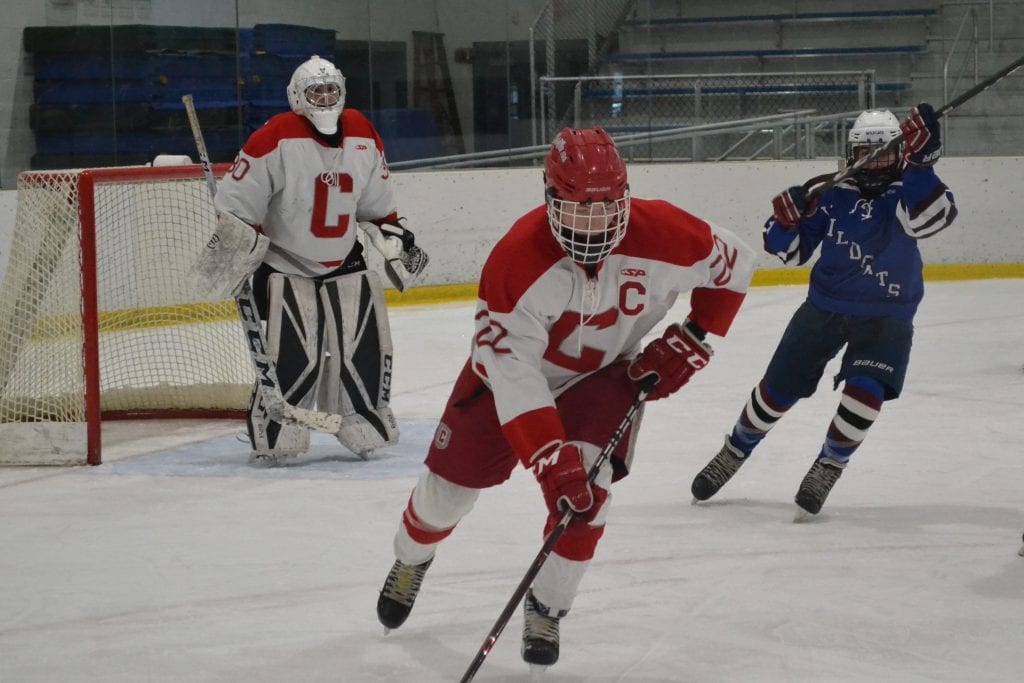 Heading into Saturday afternoons regular season finale against the Suffield/Granby/Windsor Locks Co-op (SGWL) team, the Conard boy’s hockey team knew one thing: Lose and they would not make the CCC post-season tournament. A win against the Wildcats and the Chieftains’ chances would greatly improve for playing at least one more game.

Coach Jason Olson’s team took care of business and in a game that was tight to the end, got the victory 4-2.

“Today was a playoff game for us,” said the second-year head coach Olson. His team played the first two periods like it was indeed a playoff game with solid defense, some good hitting, and timely scoring.

The one thing that nearly cost Conard the game was penalties. They took five penalties, including two in the second, that led to a Wildcats’ 5-3 advantage. Stellar defense led by goalie Graydon Selstad, and strong forechecking all day by Sam Heller, helped Conard avoid giving up the short-handed goal. But all that time on the penalty kill would come back to haunt the Chieftains later in the game.

Early on, it looked like Conard would easily accomplish its mission on the day. At 7:47 of the first, Colum Flaherty’s shot was stopped by SGWL goalie Cam Begley, but forward Aidan Shaffer was Johnny-on-the-spot to put in the rebound for the 1-0 lead.

The senior, who is second on the team in goals scored, would be buzzing around the net all day for Conard. 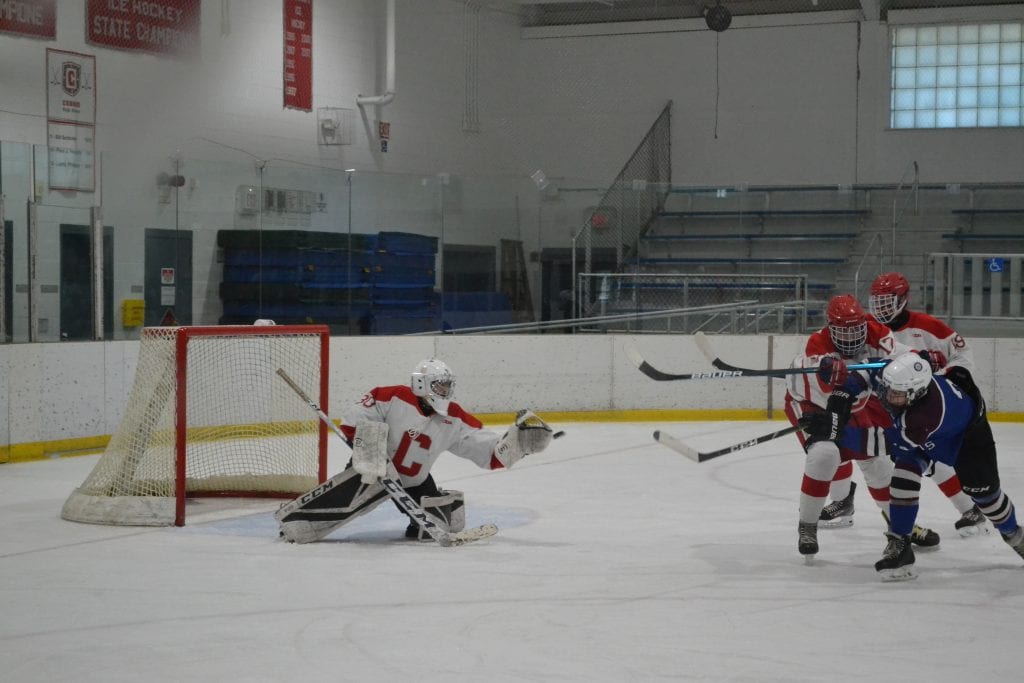 Three minutes after the goal Conard, would take its first penalty of the day for too many men on the ice. Selstad was strong in net, making one fine glove save and then a big pad save with just :07 to go in the penalty.

Conard’s second goal of the game came on a wicked wrister from senior captain and leading goal scorer Owen McGoldrick. He let it go from just inside the dot in the left face-off circle, and Begley was beaten for the second time on the day.

The two teams would exchange penalties midway through the period – a period that saw Conard turn up its physical play and turn in some standout defensive plays.

Flaherty – who was easily one of the games top three players – broke up an SGWL 2-1 rush when he deflected away a pass in his defensive zone, and later Selstad had to bail out one of his teammates with a save and a cover of the puck after a turnover in the Chieftains end of the ice. 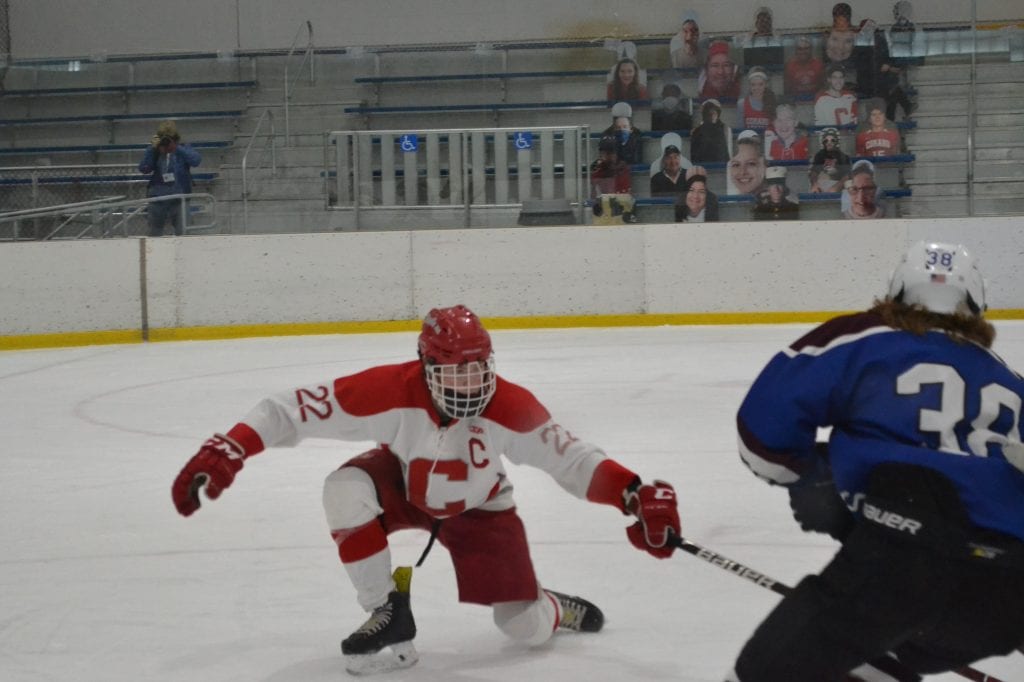 Through two periods, Conard was outshot 19-14, with special teams eating away at a lot of the ice time. The penalties against were something of a mixed bag for Olson. “We were concerned by the penalties, but we have been begging them to be more aggressive.”

The highlight of that aggressive play came late in the period when Flaherty sent Dylan Gazdik of the Wildcats through a partially open door along the SWGL bench. However, that same aggressiveness almost helped turn what looked like a Conard victory into a loss as the third period was played.

It was a clearly tired group of Chieftains from skating shorthanded so often in the first two periods. On the other side, SGWL was amped up, realizing if they lost the game, they would not make the post-season tournament.

The Wildcats had the better of play, just 2:36 into the period, they would score their first goal of the game on a wild play. Off a faceoff to the right of Selstad’ s goal, the puck was thrown at the Conard net from a crowd of players. The puck managed to find the back of the net, but Conard’s players immediately appealed for a no-goal as they thought it was deflected in with a high stick. The officials conferred briefly at center ice, and decided it was a good goal, and the lead was now just 2-1 for Conard.

For much of the rest of the period, SGWL controlled the flow of play, with Conard showing brief flashes of offense but not getting many good scoring chances. With 3:04 to play, McGoldrick would get his second goal of the game, 19th of the season, when he picked up a loose puck in the left circle, skated in on Begley and went high, stick side to roof the 3-1 goal. The Chieftains’ joy was short lived, as less than a minute later, the Wildcats’ Jordan Blais would knock in a rebound of a shot by Tyler Mackowski, and it was once again a 1-goal game. 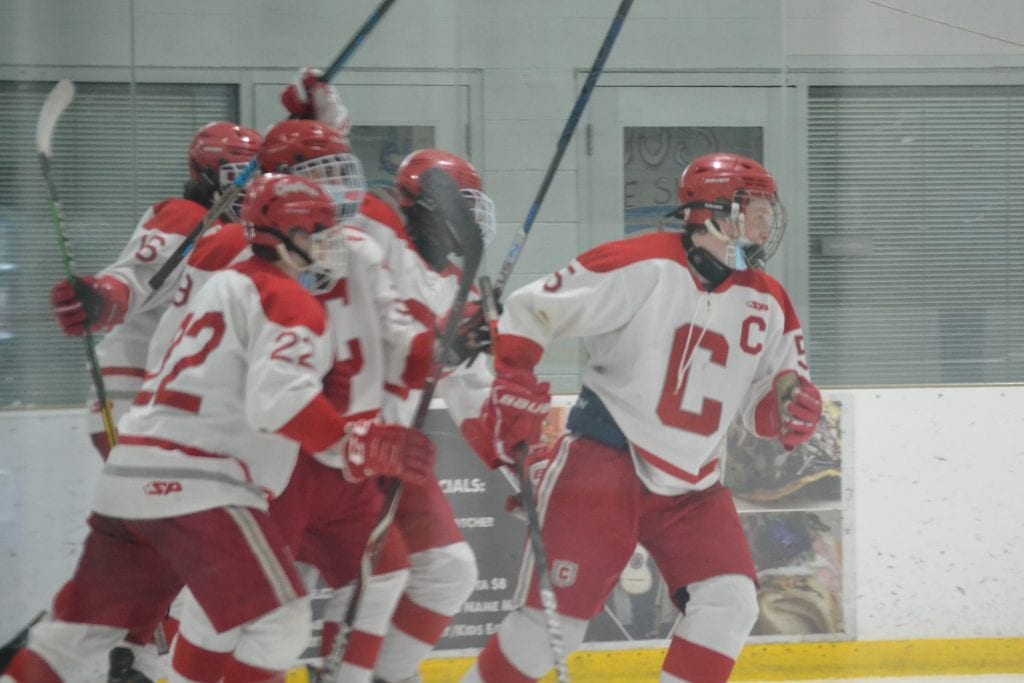 With just under 90 seconds to play, SWGL would pull Begley for the extra skater. The Wildcats were looking dangerous with their passing and possession in the offensive zone, but with just 1.5 seconds to go, Conard would end all doubt.

SGWL was pressing the attack with the extra skater, when the puck squirted out of the zone and Conard’s Jack Wenz chased it down along the boards, skated over center ice fighting off the desperate charge of a Wildcats player, and sailed the puck into the empty net for the 4-2 final.

The win was Conard’s sixth of the season in just 11 games, a far cry from a team that went 2-16-1 a season ago. Olson, who took over the squad with six games to go last season, was quick to credit his players for the turnaround. “We made a lot of strides towards playing good team hockey. They have come a long way and bought in about playing to win,” he said.

Although Conard’s finish above .500 on the season should secure them a spot in the opening round of the league tournament, they must await the results of some other Saturday games before they will know for sure.

Late Saturday night the team received the positive news, and Conard, a No. 5 seed, will face No. 4 seed Tri-Town on Monday in the CCC South tournament. The winner of that game will move to the semifinals to face the No. 1 seed Hall-Southington team. The Warrior Knights eared a first-round bye. 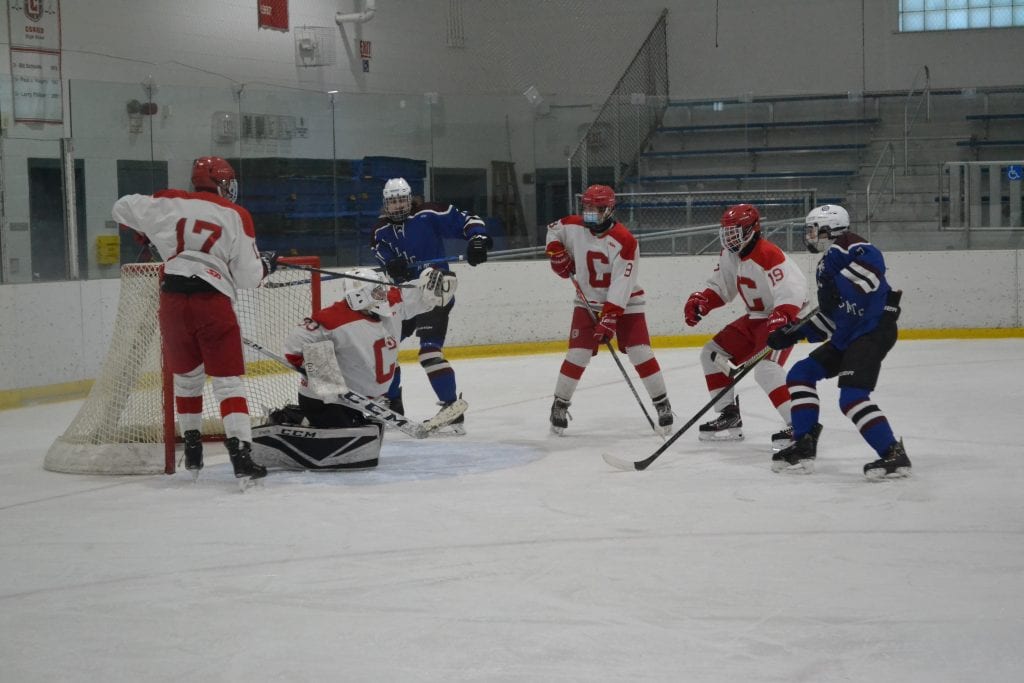 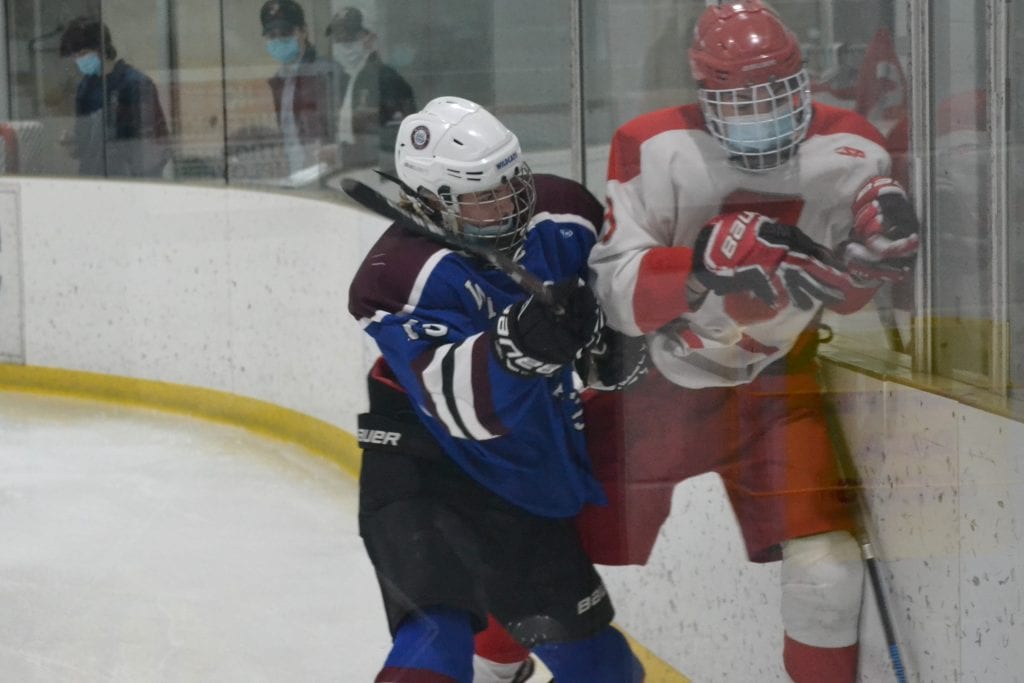 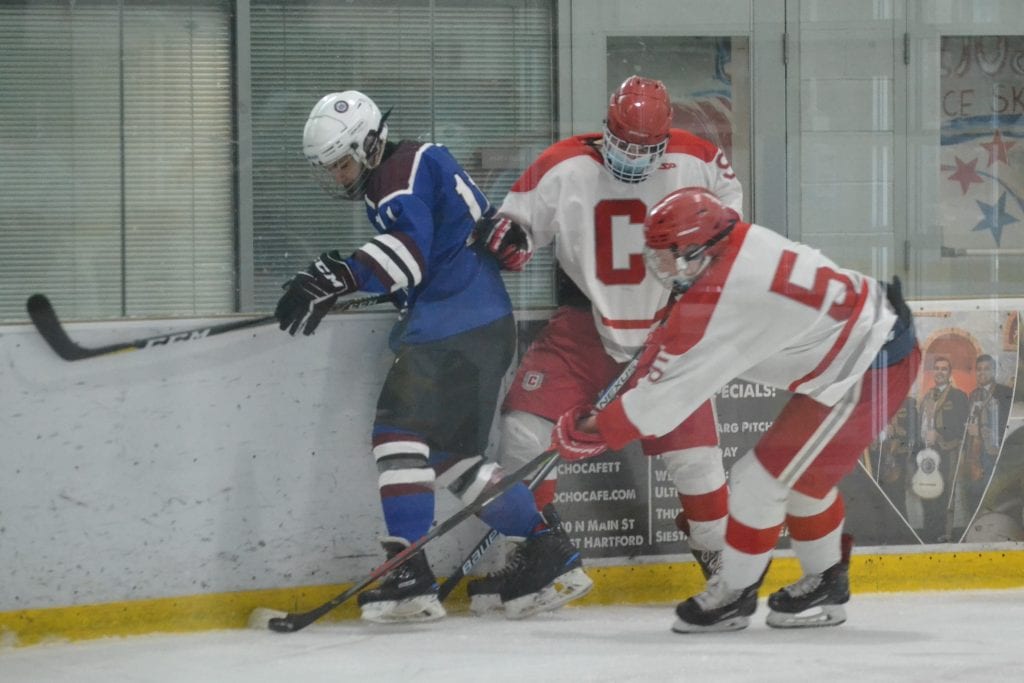 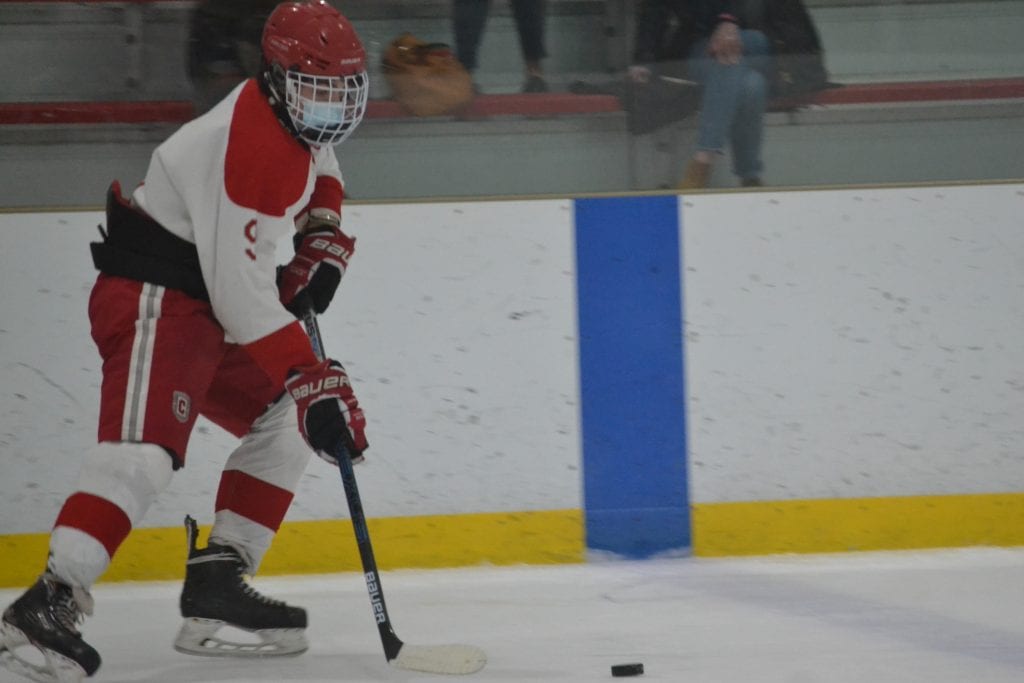 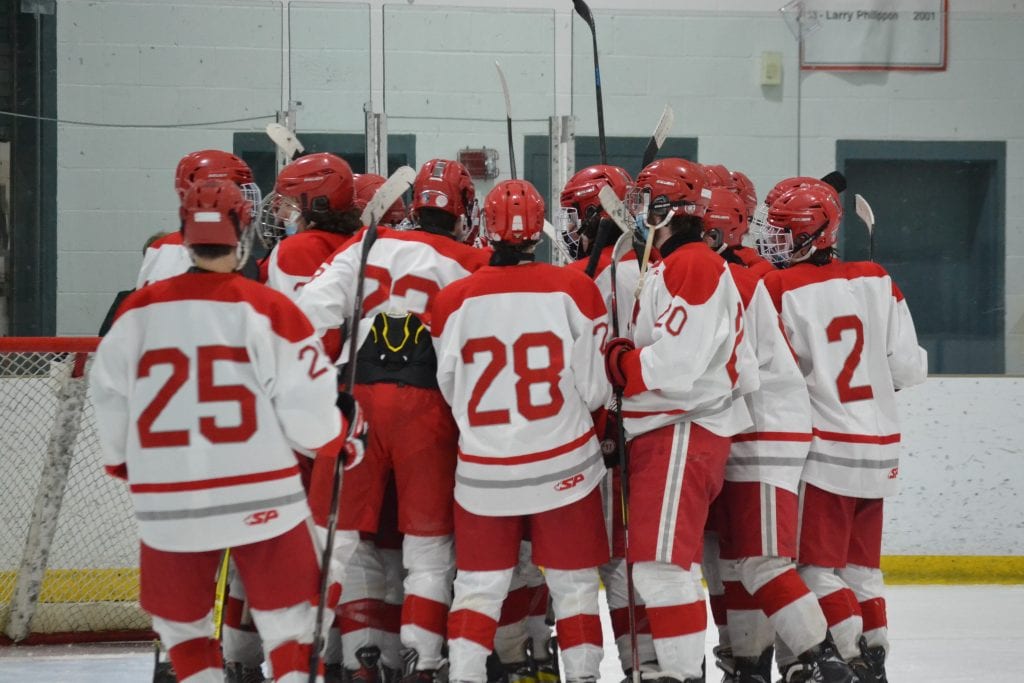