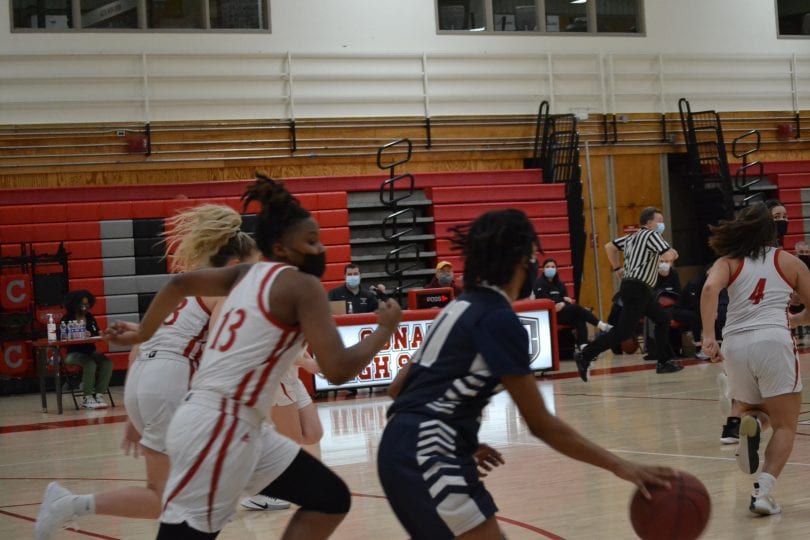 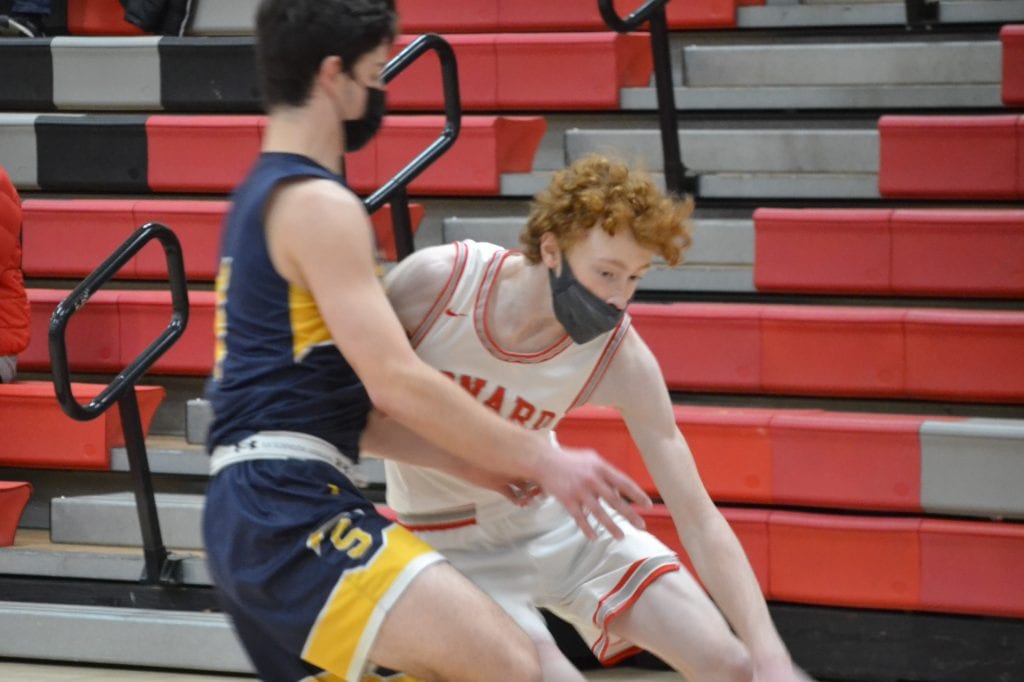 The center forward was the Chieftains’ most dominant player again this season, setting a school record with her 23.3 points per game average and tying the mark for most points in a game – 37 – and most 30-point games in a season with four.

Felder’s coach, Laurie Cersosimo, said that the effort put forth by the player inspired her teammates on and off the court, but this year was even more special. “Azaiyah and her teammates were tested and had much adversity to overcome. Had her season not been cut short I am confident she would have broken her own records and gained additional accolades,” Cersosimo said. “Azaiyah’s skill is effortless, her knowledge surpasses this level, and her passion and creativity for the game is an absolute joy to watch.”

“Yaya,” as she is known to friends, is headed to Ohio University to continue her basketball career and her education. In addition to her All-State selection this season, Felder was also named All-Conference for the third straight season. She leaves Conard as the school’s all-time leading scorer with 1,438 points, and tied for third all time with 88 3-pointers.

Coach Cersosimo said that watching Felder grow and mature over her time at Conard has been special. “As her coach, I reflect on the little things I’ve observed in support of that growth. Her sportsmanship, leadership and her ability to handle and thrive in pressure situations are most notable,” she said. “The accolades are impressive, but I am most proud of the young woman she has become today. Azaiyah is a gifted athlete and a truly special person, and I am humbled and fortunate to have had the opportunity to coach her and to be a part of her life.”

Cersosimo is also quick to point out that Felder’s success was also the result of the teammates that surrounded her in her time as a Chieftain. “She would agree that her teammates have held an important role in support of this growth both as an athlete and as an individual. Azaiyah’s career at Conard has inspired current and prospective teammates to strive for greatness, in sport and also in life. The coaching staff and I often discuss how special it is to be a part of the school history that she has created, and we look forward to the opportunity for someone else to challenge what she has accomplished for herself and this program.” 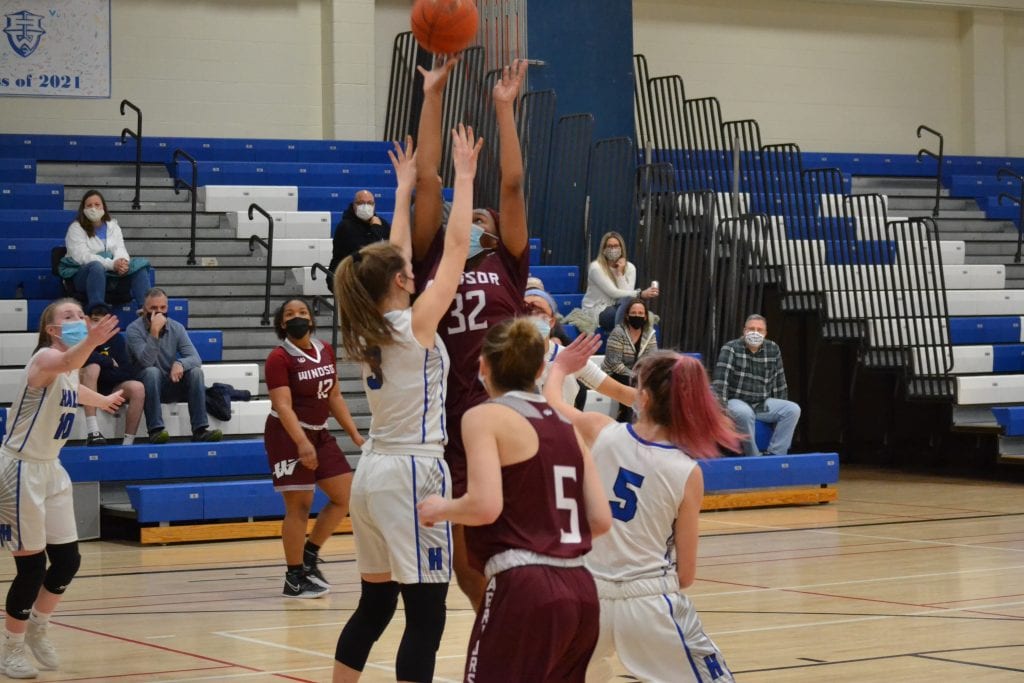 Hall High School is also represented on the girls All-Conference basketball team. Sophomore guard/forward Lydia Poulin –  who missed part of the season with a hand injury – was also named to the CCC squad.

On the boys side of the game, Conard’s Riley Fox became the first freshman boys player from the school to ever be named to the All-Central Connecticut Conference team for basketball. Fox averaged 15 points, 7 rebounds, 1 ½ assists and blocks, and 1 steal per game this season. His coach, Jared Leghorn, has known Fox since the player was in elementary school and attended Chieftain Hoop School.

“Unfortunately Connor Olechna, our senior guard, and All-Conference player last season, got injured early on and missed seven games. Once that happened, Riley sort of took over as our go-to offensive player. We knew he had the talent and ability to be an All-Conference level player as a freshman. We didn’t know he would be thrust into that role so early on,” said Leghorn.

He described Fox as a special player whose maturity work ethic and overall attitude towards the sport set him apart. “The thing that sets Riley apart from other guys with his talent level is his attitude. He is so coachable and is one of the best teammates we have in the program,” added Leghorn. 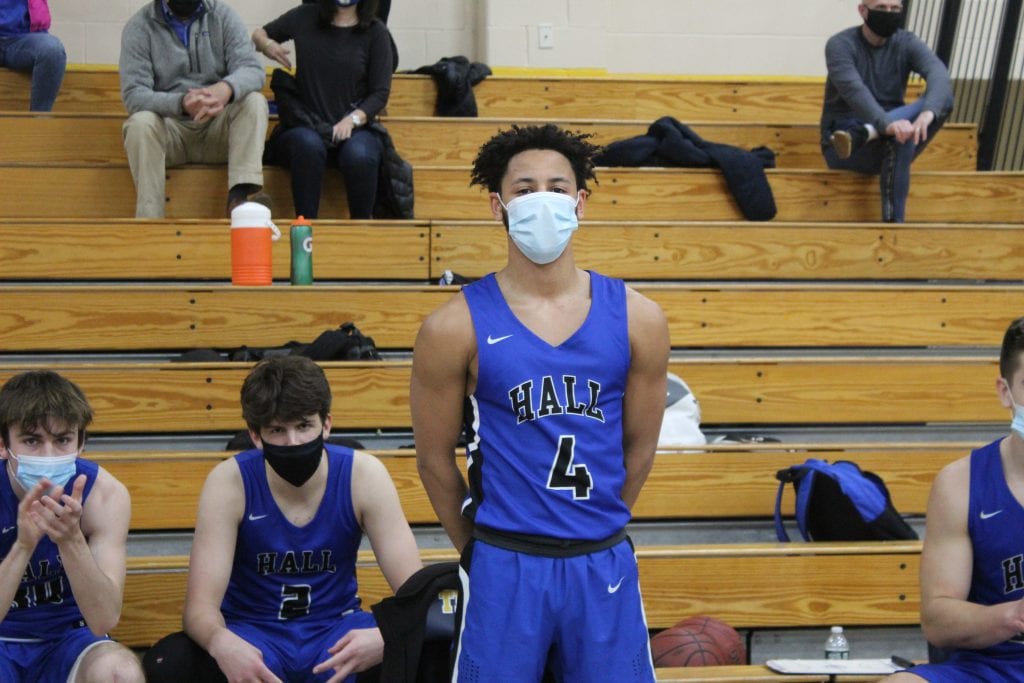 Joining Fox on the All-CCC team are Hall senior Matt Walker and junior Will Gaumer. 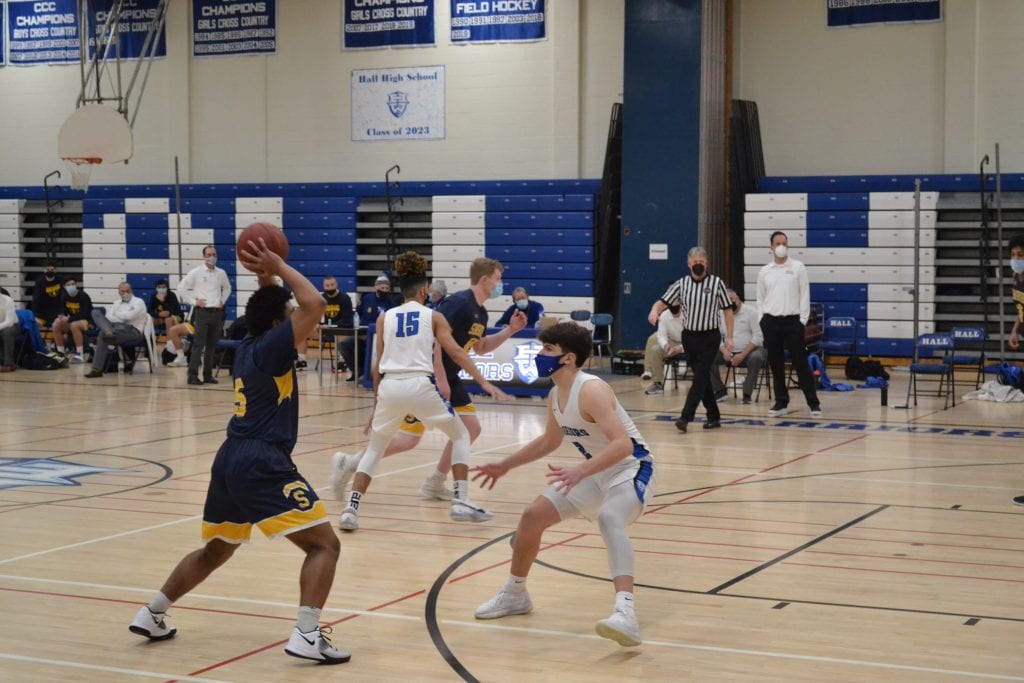 In the pool this winter, Hall and Conard swimmers also achieved All-State and All-Conference honors. 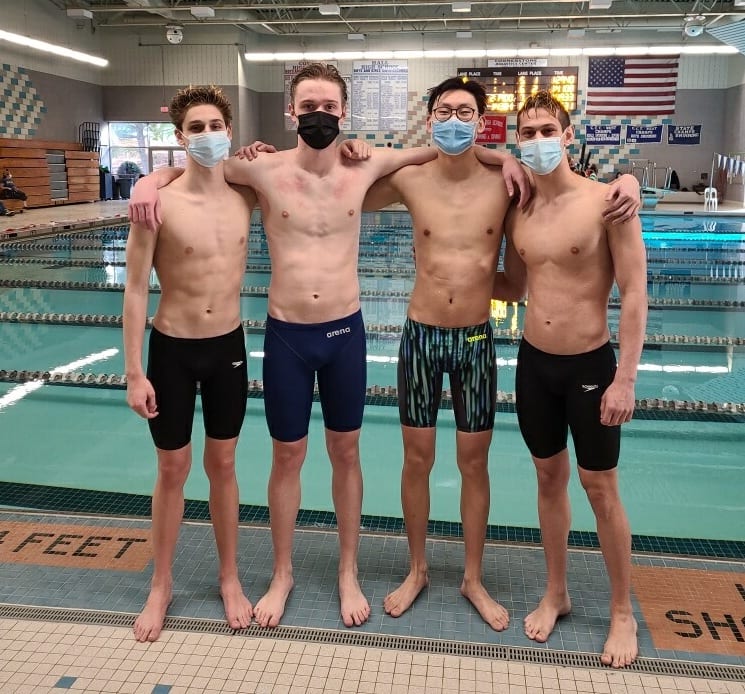 Earning All-State honors was the boys 200-yard Freestyle Relay team from Hall that turned in the fourth fastest time in the state this year with a 1:29.40. The relay members were Andrew Sun, Chris Liddell, Carson Raisner, and Kobe Dominguez.

Both Dominguez and Raisner earned individual All-State honors as well. In the 100-yard Breaststroke, Dominguez’s 59:94 was good enough for 16th place overall in Connecticut, and Raisner’s 54:13 in the 100-yard Backstroke was 15th best in the state.

For the Region C All-League (conference) team, both Conard and Hall turned in strong performances. In the 200-yard Medley Relay, Hall’s entry of Dominguez, Sun, Raisner, and Liddell swam a best time of 1:41.86. The same foursome also earned honors for their 200-yard Freestyle Relay time of 1:29.40. 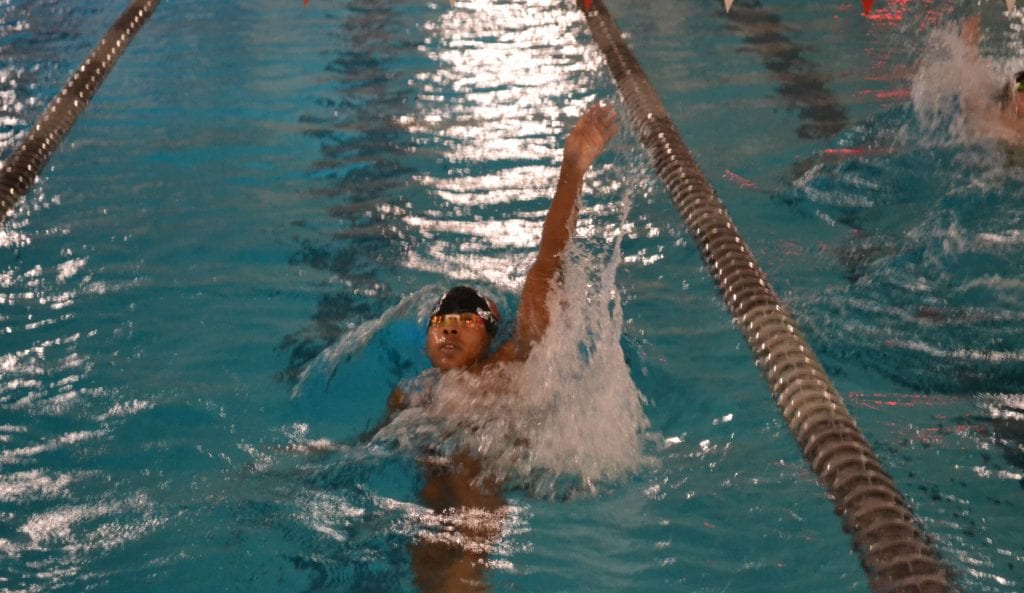 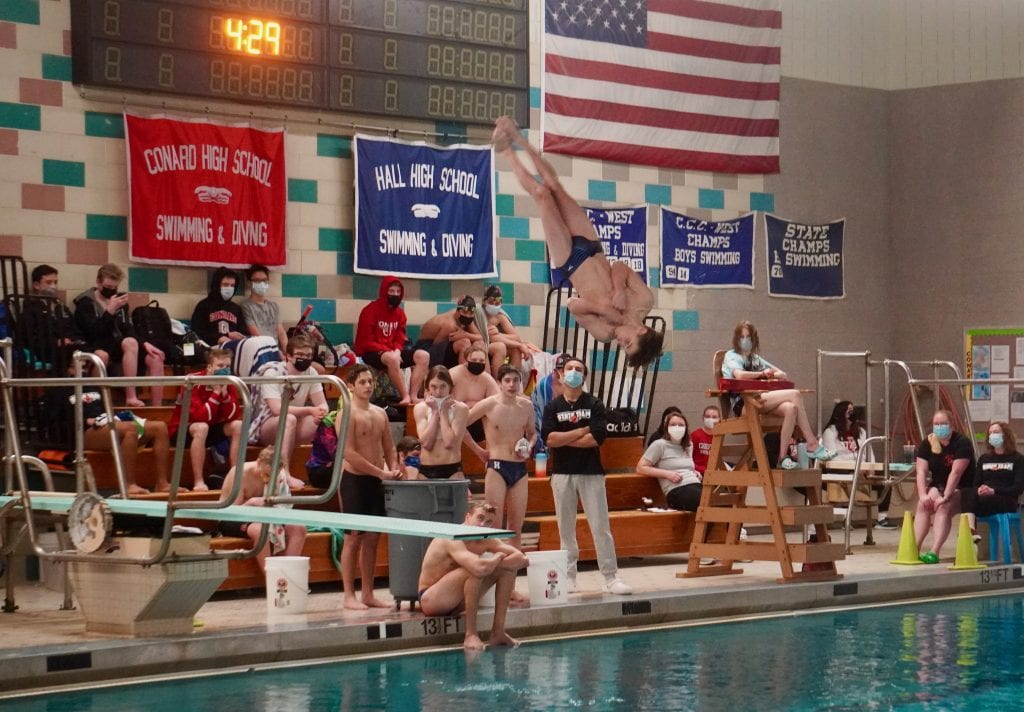