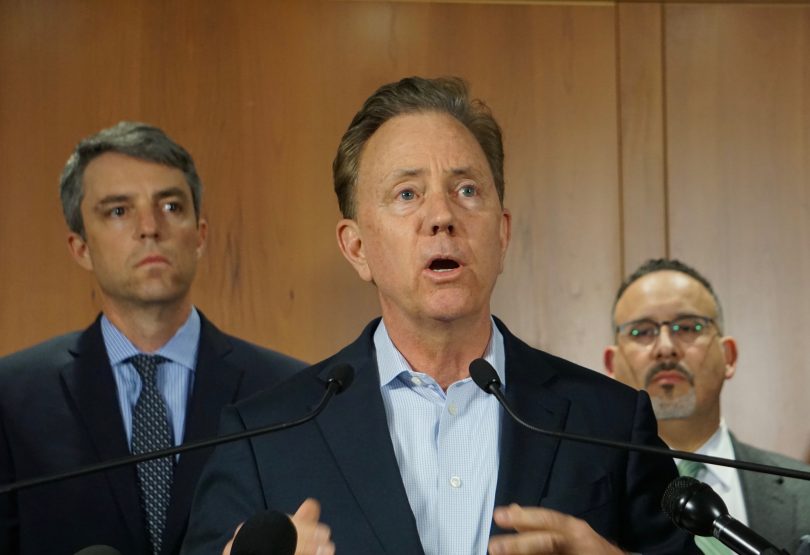 The pandemic’s impact on Connecticut deepened Thursday with school closures and the governor’s ban on large events. The General Assembly has suspended its session for two weeks.

To slow the spread of a coronavirus expected to infect hundreds of thousands of Connecticut residents in the coming months, the largest school systems announced closures and Gov. Ned Lamont signed an executive order Thursday banning all gatherings of more 250 people.

The General Assembly will not meet for at least two weeks, suspending its three month annual session at a crucial juncture, House Majority Leader Matt Ritter, D-Hartford, said Thursday. The State Capitol and Legislative Office Building will be closed at least until March 30, and employees across state government are encouraged to work at home, where possible.

Connecticut had five confirmed cases as of Thursday night, four in Fairfield County and one in Litchfield County. The patients range in age from an elementary-school student in Stratford recovering at home and older adults who are hospitalized, including one Wilton man who required the assistance of a ventilator.

But the state epidemiologist, Dr. Matthew Cartter, said he expects a rapid spread that could sicken between 10% and 20% of the state’s 3.5 million residents in the coming month as its moves north and east from a foothold in Fairfield County.

He echoed the assessment of Dr. Anthony Fauci, the director of the National Institute of Allergy and Infectious Diseases: Eventually, 70% of the U.S. population will contract COVID-19, a novel coronavirus that can cause everything from mild fever and coughing to life-threatening respiratory distress.

“This is a virus that none of us has immunity to,” Cartter said.

Lamont’s ban does not direct the closure of public schools, a decision left to local authorities. But he also signed a second order waiving the 180-day minimum for instruction, a nod to the the dozens of school systems that have either announced closures or warned parents of the strong possibility it will happen soon.

“In an abundance of caution, most of the schools in Fairfield County have announced they will be closed for two weeks or for the foreseeable future,” Lamont said in what has become a daily coronavirus briefing at the Emergency Operations Center in Hartford. But schools also are closing outside that county, in towns ranging from New Haven to West Hartford.

The state’s three largest school systems – Bridgeport, Hartford and New Haven – are closing for at least two weeks, affecting 60,000 children, many of whom rely on the schools for two meals a day.

The governor’s executive orders came as the U.S. response to the disease hit critical mass, with a prime-time speech by President Donald J. Trump, the cancellation of NBA games and the NCAA basketball tournament, the widespread closure of colleges, and the sudden downsizing of the presidential campaign, including the cancellation of Joe Biden’s trip to Connecticut next week.

Lamont said his administration is exploring how best to mitigate the impact on businesses and families. The Department of Economic and Community Development is assessing potential aid for small businesses, and the Office of Early Childhood is pursuing with employers the possibility of offering temporary child care on site to cope with school closures.

With the declaration of a public-health emergency two days ago, the governor has broad authority under two state laws, including waiving rules and regulations that normally would make temporary day centers impossible. Lamont said the state is trying to build an infrastructure in anticipation of broader school closings.

“I think we understand what closing the school means to communities, what it means to businesses, what it means to families, and we’re working very hard to make sure this works for you,” Lamont said, addressing the public. He added, “We don’t know whether this is going to be one month or two months, what the duration is. But we are planning for the future.”

A major outbreak in Westchester County, NY, is on the state’s doorstep and Massachusetts and Rhode Island also have reported cases, a mix of those suspected to have been contracted on trips abroad or elsewhere in the U.S., plus those transmitted locally. 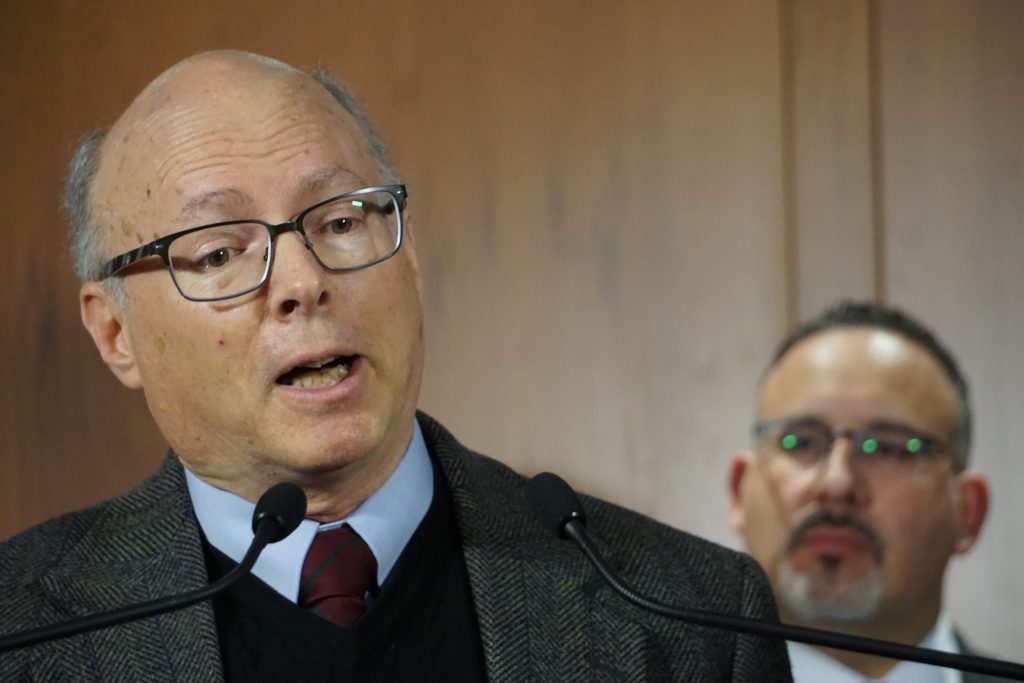 If Cartter’s estimate of a 10% to 20% infection rate is accurate, between 350,000 and 700,00 people will be falling ill in Connecticut over the next couple of months. Cartter said  his estimate requires some speculation based on how the virus spread in Washington state and modeling of how other contagious diseases progress, but the public health expert also noted that much is yet to be learned about the novel form of this coronavirus.

“There are a lot of modelers trying to work on this one as well, using data from Italy and China and South Korea,” Cartter said. “Right now, we’re looking at what happened in Washington state and California. They are several weeks ahead of us.”

Cartter said the disease is likely to spike, subside and increase again.

“This is not going to be over in a month or two,”  Cartter said. “What’s expected is that there will be a spring wave that will, just like you are seeing in China and in South Korea, where the rates start to go down with the control measures. Then we’ll see this again in the fall. This happened with influenza in 2009. …We don’t know that’s going to happen for certain, but that’s what we’re planning for.”

One of the other variables is Connecticut acting faster and more dramatically to slow the spread, a strategy to avoid a sudden spike in severe respiratory cases that could exceed the capacity of hospitals to care for those in dire need. Lamont said he knows people are anxious about how the disease will progress and whether it is an echo of the 1918 flu pandemic.

“I think you should understand there are some real differences here,” Lamont said. “We think we’re paying attention to this. We learned from China. We learned from Italy. and we’re making real efforts right now to make sure that we hold down and contain this as best we can.”

Connecticut now has tested 95 people with symptoms of the disease, with 89 tested negative and six positive. One of the newly diagnosed is a New York woman in her 20s who was tested as an outpatient at Greenwich Hospital and returned home to recover. She is counted as one of New York’s cases.

Cartter said the other two new cases involved the Stratford student, who was exposed to someone else with the virus, and a Stamford woman in her 60s, who recently returned from Italy and is hospitalized at Stamford Hospital.

Other steps taken Thursday by the Lamont administration included extending license renewal deadlines by 90 days to reduce crowds at DMV branches and relaxing attendance guidelines at the police academy, relieving recruits of pressure to attend when showing symptoms of illness.

“Obviously, there are a lot of jobs in the state you can’t do from home. You can’t be a state trooper, you can’t be a correction officer and so forth,” Geballe said. “But we’re trying to ensure that we are taking actions to ensure that as many of our employees can participate in the social distancing efforts.”

The administration deferred to the Judicial Department questions about whether bail decisions should be revisited regarding jailed defendants in criminal cases.

“Given the CDC’s warnings about avoiding confined spaces and the threat COVID-19 poses to elderly people and those with serious chronic medical conditions, we urge state officials to exercise their existing powers to reduce incarceration as much as possible during this pandemic,” said David McGuire, executive director of the ACLU of Connecticut.

Lamont has been granted broad powers by the emergency declaration, but lawmakers are likely to resume the 2020 session to adopt budget revisions, which now are likely to include funding to cope with COVID-19.

“I think we all agree, and the governor’s office said it today, there are some things we have to do legislatively and that cannot be done by executive order,” said Ritter, the House majority leader.

Municipalities that must meet publicly to adopt budgets this spring are looking for guidance as to how that might be accomplished with a ban on large public meetings, and lawmakers have questioned if the state can protect residents against foreclosures and evictions during the crisis without legislation, he said.

“We have to think about this stuff,” Ritter said. “There is no denying we are at a very interesting time in our state history – our country’s history, for that matter. We’re going to take it week by week.”