West Hartford restaurateur Billy Grant said the removal of restrictions will give the public a good sense of confidence, which in turn will help the industry.

Gov. Ned Lamont announced Monday that all public health restrictions due to the pandemic will be lifted May 19 leaving businesses to chart their own course as how to keep consumer confidence while broadening services.

“I got the good news, that’s really good news for our industry,” said restaurateur Billy Grant, who owns and operates Restaurant Bricco in West Hartford Center and Bricco Trattoria in Glastonbury.

The announcement included an intermediate step – allowing bars to serve alcohol outdoors without serving food, and extending the curfew for dining from 11 p.m. to midnight as of May 1. Also on that date the number of people permitted to sit at a table outdoors will no longer be restricted.

Bars will be able to open indoors without providing meals, large event venues and movie theaters will be free of crowd capacity restrictions, and the dining curfew will sunset on May 19, Lamont said.

The mask mandate will remain in place until further notice, but Lamont said at a Monday news briefing that at some point it will be up to individual businesses to determine if customers will be required to wear masks. Guidelines will be forthcoming from the Department of Public Health providing clarity.

“You’ll be able to have a cool frosty with friends around the table,” Lamont said. “We’ll see how it goes by May 19.”

The plan to loosen the restrictions is contingent on the vaccination rate and other metrics including the number of COVID-19 infections and hospitalizations, Lamont said.

“Obviously we’re going to watch it like a hawk,” Lamont said. 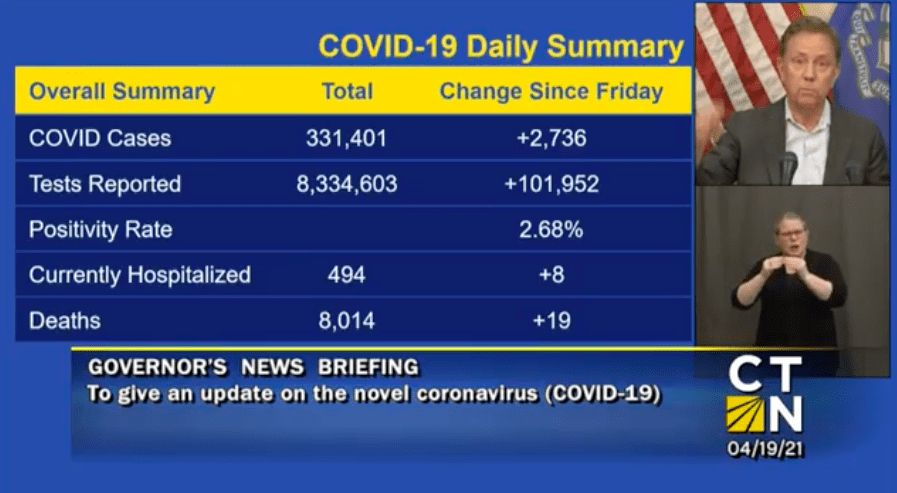 Connecticut has been hovering for weeks at about 1,000 positive tests for COVID-19 a day. West Hartford had 27 new positive cases reported over the past three days according to Monday’s data.

The state reached the milestone of 8,000 deaths from COVID-19 over the weekend.

At the same time, the number of state residents who have been vaccinated against COVID-19 increases by about 10% each week, said the state’s chief operating officer, Josh Geballe. As of Monday, 61% of adults over the age of 18 had received at least one shot, Lamont said. In West Hartford the percentage is higher, with 63.1% of residents – of all ages – having received at least one dose of a vaccine as April 15. 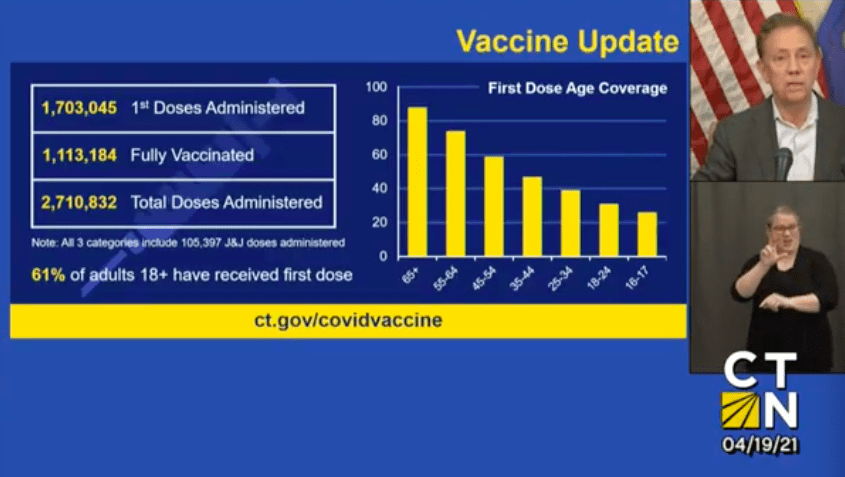 “We’re not slowing down at all,” Geballe said. “At the current trajectory, we’ll be at 70% by the end of the month.”

The mask mandate will likely continue in the state’s elementary, middle, and high schools through the end of the school year in June, and in crowded public places, Lamont said. But students returning to state-run colleges and universities this fall probably will not face a vaccination requirement, he said.

The announcement was a “breath of fresh air” for the state’s embattled restaurant and bar industry which lost a record number of jobs during the pandemic, said Scott Dolch, executive director of the Connecticut Restaurant Association.

“More than a year after this pandemic began, local restaurant owners and employees can finally see light at the end of the tunnel,” Dolch said. “Today’s news gives restaurants a plan and a timeframe for recovery.”

Some of the details of the removal of the restrictions will have to be worked out, Dolch said. But it will be important that restaurants and bars maintain safety measures in order to keep consumers comfortable, he said.

“Restaurants are still driven by consumer confidence and what they feel,” Dolch said.

Grant said there have been six or seven tables at Restaurant Bricco that he has been unable to use due to the need for maintaining six feet of distance between groups of diners where there is not plexiglass. “It’s definitely going to help us on the weekend,” he said, and even during the week if the demand is there.

“It’s going to give people a good sense of confidence, which is what I think we need,” he said.

Patio dining is also popular in West Hartford, and with the re-deployment of expanded dining corrals in just a few weeks, local restaurants will have even more options and capacity available.

Bricco doesn’t rely on late night business as much as some other establishments do, and Grant said those businesses will definitely benefit from easing of the restrictions.

Bars have been particularly hard hit since they were not allowed to open unless they were also selling meals. Dolch said most bars in Connecticut have full-service kitchens which allowed them to stay open, but that’s not their business model.

At least one bar, Casey’s Irish Pub in Milford, sued Lamont over his use of executive power to shut down the industry — and lost.

The key will be to get as many people vaccinated as possible so the state’s restaurant industry can thrive again, Dolch said.

“Today’s news gives restaurants a plan and a timeline for recovery,” said Dolch. “It’s possible because of the incredible job Connecticut has done fighting COVID, from the tireless work of local business owners and employees to put safety first, to the nation-leading efforts by Gov. Lamont and his team to get our population vaccinated. To that end, our association will continue urging our members, their employees, and their patrons to get vaccinated – the faster we move on from this pandemic, the faster our businesses and our economy can recover.”

Right now 88% of state residents 65 and older have been vaccinated. The trick will be to increase the percentage of vaccinated adults ages 18 to 44, who tend to frequent bars and concert halls, Lamont and Dolch said.

“If we can get that 18-to-44 age group up, we will have herd immunity and be back to a really great number,” Lamont said.

Tim Restall, President of the Yard Goat, also participated in Monday’s press briefing. He said that tickets to games will be sold in pods for the first few games of the season, but the stadium will be permitted to be at full capacity for games after May 19.

The Yard Goats’ home opener is May 11 against the Portland Sea Dogs.

Restall said he doesn’t know what other teams in other states are doing, “but Connecticut is hitting a home run.”