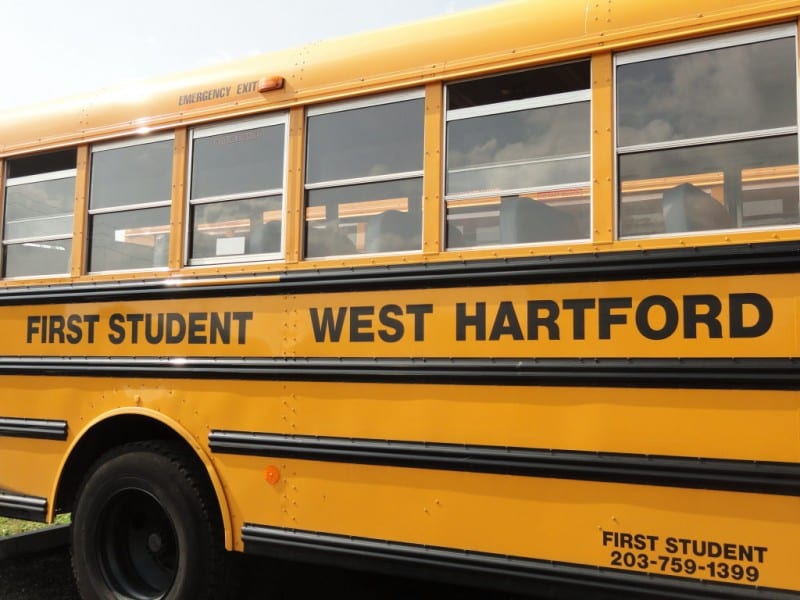 Schools in West Hartford and throughout the state will continue to provide distance learning and meal distribution, but buildings will remain closed to students and teachers for the remainder of the 2019-2020 academic year. [Updated]

The announcement, perhaps ironically made on Teacher Appreciation Day, did not come as a surprise, but nevertheless officially creates an abrupt ending to the 2019-2020 academic year, and eliminates many of those traditional spring moments for high school seniors as well as students in middle and elementary school who are about to transition to a new school.

“It doesn’t come unexpected to us as we we already saw the many challenges that will be involved in opening schools in the fall, let alone in the next three weeks,” West Hartford Superintendent Tom Moore told We-Ha.com after the decision was announced Tuesday morning. Schools are designed to be community, and are not well-suited for social distancing, and many accommodations will be needed even in the fall.

“It of course makes us sad for all of our kids, that they can’t come together again, especially for our seniors who will be leaving us without those moments of closure spring senior year brings,” said Moore, whose own daughter is a senior at West Hartford’s Conard High School.

“I know how important it is for so many students and teachers to finish out the school year, and I was holding out hope – particularly for high school seniors – that we’d at least be able to complete the final few weeks, but given the current circumstances and to protect everyone’s safety, it has become clear that it’s just not possible,” Gov. Lamont said Tuesday morning.

The governor’s most recent executive order had mandated schools remain closed through May 20, after an initial closure through March 31, but Lamont has been hinting about the closing announcement for several weeks. As of Tuesday, Education Week reported that 46 states, four U.S. territories, and the District of Columbia have officially announced the closing of schools for the rest of the academic year.

The announcement of schools closing also effectively ends any hope of a spring sports season, which the CIAC had said was possible for June if students were able to return even for a few weeks.

“The CIAC’s consideration for any spring sport experience has always been contingent on the re-opening of schools for in-person instruction,” the organization said in an email. “This morning, Governor Lamont ordered the cancellation of in-school classes for the remainder of the 2019-2020 academic year. Therefore, there will not be a 2020 CIAC spring sports season. The CIAC empathizes with our school communities and the experiences lost due to COVID-19. Our focus is now on completing guidelines for summer contact and resocialization of CIAC sports in the fall.”

Executive Order No. 7II, which officially extends the closing of schools through the end of the academic year, was released Tuesday evening.

In Tuesday’s announcement, Lamont said he is consulting with state and local officials regarding summer school, and plans to make that announcement later this month.

“Our summer school is already digital,” Moore said. That decision had already been made, and he said planning over the next three to four months will now focus on being prepared for the fall.

Further guidance will follow, Bye said, but she anticipates the “maximum group size” for camp groups will remain 10, the same number allowed in a childcare groups.

West Hartford has not yet made an official announcement regarding the whether the town’s summer camp programs will be held. “We are reviewing the recommendations from the state and the CDC,” Director of Leisure and Social Services Helen Rubino-Turco said Tuesday evening. “We are guardedly optimistic.”

Moore said it seems like West Hartford has already been doing distance learning “forever.” He initially announced March 12 that schools would close effective March 16. In West Hartford, remote learning for all grade levels began on March 23.

“The key right now in working digitally is to keep improving,” Moore said. “It’s not perfect here, or anywhere else.”

While it may not be a “finished product,” Moore said he is so proud of how West Hartford’s teachers, after just two days of virtual training, completely revamped their lesson plans and transitioned to distance learning.

“The difficult decision to cancel classes for the remainder of the year is based on the health and safety of our students, their families, and our Connecticut communities,” Education Commissioner Miguel Cardona said Tuesday. “While technology and remote learning will never replace the experience of our students in their school community, we are committed to constantly improving access to high-quality materials and connectivity for our students. Districts are working hard to find creative ways to celebrate the success of our seniors, as well as students who are transitioning from fifth and eighth grade. With the Reopen Connecticut Education Team, we are committed to preparing re-opening plans for summer school, as well as fall classes. While we do this, we also thank our dedicated educators today for their service to their students’ academic and social emotional needs.”

Moore said that Conard High School Principal Julio Duarte and Hall High School Principal Dan Zittoun have been meeting virtually with seniors this week, talking to parents, and engaging focus groups in determining how and when to honor the Class of 2020. An announcement is expected sometime in the next week.

“Whether it’s virtual, or whether there is some safe way to bring kids together, even if it’s without parents, we are looking at every possible opportunity,” Moore said regarding some type of event to provide closure for this year’s high school seniors.

At Tuesday night’s Board of Education meeting, Assistant Superintendent Paul Vicinus said the seniors will definitely be honored through a virtual graduation, that they will be able to have as a keepsake.

Other challenges that Moore said the district is facing includes the hiring of new teachers. He is also in the process of hiring a new principal for Bristow Middle School. The impact on retirements and enrollment overall is still an unknown, Moore said, but he said there should be opportunities for new teachers in the upcoming academic year.

“I want to thank the many educators across our state who have stepped up to provide remote learning during this time, as well as the many staff members who’ve been putting thousands of meals together for students each and every day,” Lamont said.

West Hartford will continue its “Grab and Go” program, available at six different sites, for the remainder of the academic year.

The last day of school for West Hartford Public Schools is currently planned for June 18, and June 15 had been set as the graduation date for high school seniors. Students have already been informed that there will not be exams or a finals week this year.

“I continue to be profoundly grateful to the Northwest Catholic faculty, staff, students, and our incredible families. This moment in our history has taken a faithful and unified community effort that speaks to the spirit of Northwest Catholic and our mission to educate the whole person, no matter the circumstances,” he wrote.

Cashman said the Class of 2020 is “resilient, committed, and passionate. … This experience will define their character and impact their leadership in ways we cannot know. For my part, I am inspired by our seniors and confident they will become beacons of hope in a weary world.”

Plans for the NWC baccalaureate and graduation ceremonies are under discussion and will be announced at a future date.

Kingswood Oxford School announced on April 17 that learning would be remote for the remainder of the academic year. Plans for some type of graduation are still being discussed, spokesperson Jackie Pisani said Tuesday, but the school has a variety of activities planned for seniors, including bagel and hot chocolate pick-up every Wednesday morning and a virtual class night.