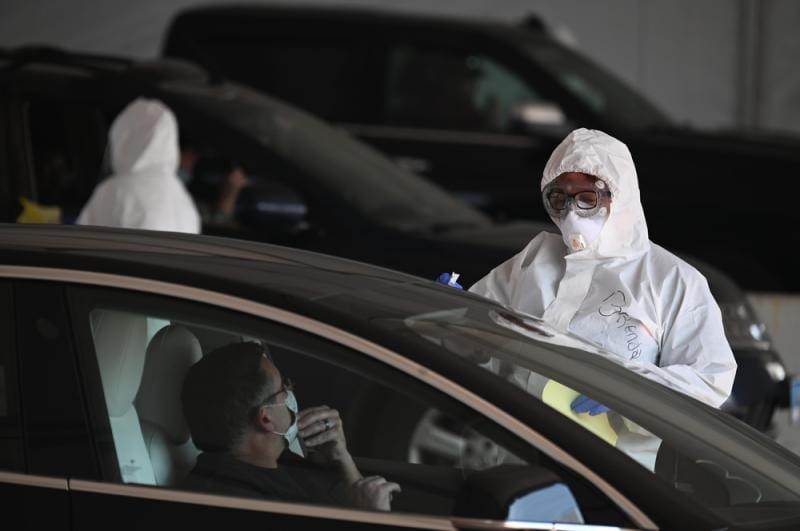 The number of patients hospitalized for COVID-19 in the state continues to decrease, reported at 937 as of Sunday afternoon. [Updated]

With just a handful of days to go until the state begins to formally reopen, testing for the novel coronavirus continues to be a major focal point – and, on Saturday, the state saw a testing surge.

The Lamont administration reported nearly 9,000 more tests on Saturday, a one-day jump that significantly beats other daily increases this month. Lamont has said he wants Connecticut conducting 42,000 weekly coronavirus tests by May 20 – and, while supply has been an issue, increasing access to tests has been one, too.

“I can’t overemphasize how important testing is, but testing only works if you’re willing to get tested,” Lamont said Thursday. “We have a lot of capacity at our hospitals, a lot of capacity still at our drive-through facility in New Haven.”

Still, the virus continues its spread, with 618 more positive cases and 54 more deaths reported on Saturday.

Details regarding fatalities were not immediately available in a report issued by Lamont’s office mid-day Sunday, but indicated 716 additional positive cases had been laboratory-confirmed, and another 5,852 tests had been reported.

In West Hartford, laboratory-confirmed cases of COVID-19 have also continued to increase as more tests are administered statewide. There were 10 more confirmed cases on Friday, 19 on Saturday, and 20 on Sunday, bringing the town’s total to 453 cases according to data released by the state.

“We have seen a spike in cases and contribute it two factors, the first being availability of testing and the second would be the testing of residents in long-term care facilities,” Aimee Krauss, director of the West Hartford-Bloomfield Health District, said in an email to We-Ha.com on Sunday afternoon. Krauss said that long-term care facilities are now testing all of their residents.

The number of deaths among West Hartford residents due to COVID-19, or with the coronavirus indicated as a probably cause, has been adjusted in data released Sunday to indicate 84 fatalities as of Saturday. Four more deaths were reported Friday, and there was one more on Saturday. No fatalities were reported for Sunday. 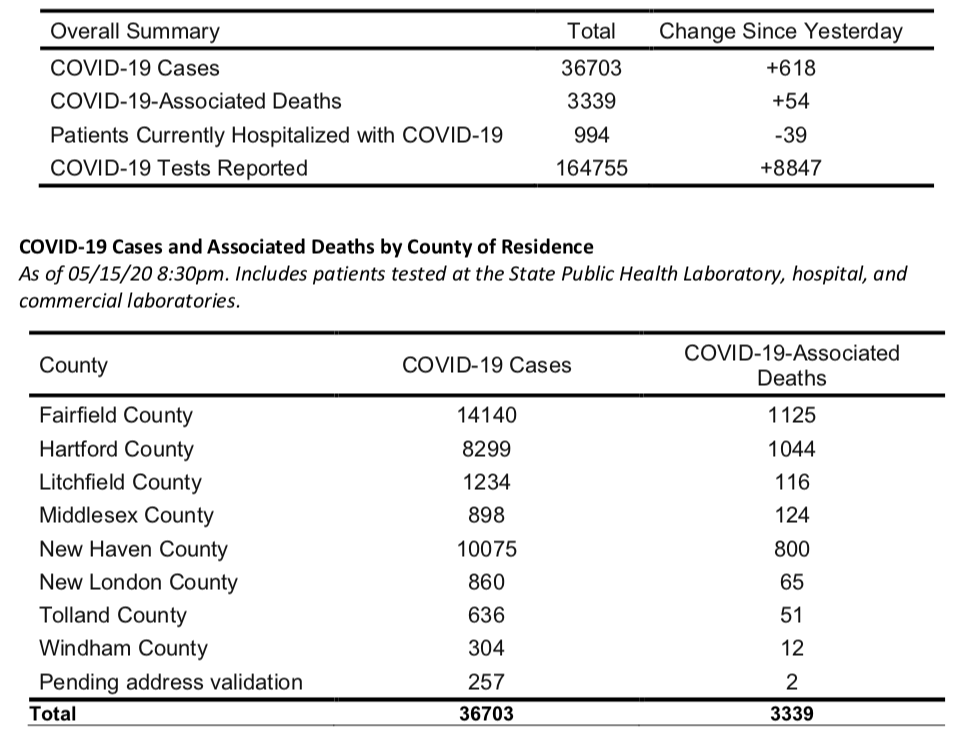 A spokesman for the state Department of Public Health deferred questions to Lamont’s office Saturday, which did not immediately respond.

A federal judge will hear arguments next week in a class action lawsuit filed by the ACLU of Connecticut. U.S. District Court Judge Janet Bond Arterton will hold the hearing by video conference next Friday. The ACLU’s latest lawsuit asks the court to order emergency actions targeted at releasing inmates age 50 and older in order to protect them from the pandemic.

Meanwhile, on Friday, the state Department of Correction locked down the Osborn Correctional Institution after more than 100 people incarcerated there tested positive for COVID-19. Test results for 278 people are still pending, according to The CT Mirror.

As of Friday, the DOC reported that 598 incarcerated people tested positive for COVID-19. The DOC says it has taken steps to limit exposure to the virus, including placing prisoners who have tested positive in isolation at the maximum-security Northern Correctional Institution, though the agency is deciding if those who tested positive at Osborn will be transferred.

Food, jobs, and the weekend

Meanwhile, as Connecticut continues to grapple with widespread food insecurity and record unemployment claims, the Lamont administration announced the launch of a limited free meal delivery pilot for at-risk residents in Hartford, Bloomfield, Wethersfield, and other towns.

It’s a partnership between the state, DoorDash, United Way 211, and UnitedHealth Group. According to the state, many of the recipients are homebound seniors. The Connecticut Department of Social Services, the Connecticut Association of Resident Service Coordinators, and municipal social services worked to identify participants for the program that’s slated to run through June 5.

And, a sunny Saturday meant another series of closures at least 20 state parks as parking lots reached their capacities.

The Department of Energy and Environmental Protection is prepared to close beaches on a daily basis if they become overcrowded. In both parks and beaches, residents are “encouraged to select locations closer to home,” only visit with members of their immediate family and avoid meeting up with others.

“I am asking the public to plan ahead and practice social distancing so that we can continue to keep these places open going forward,” said DEEP Commissioner Katie Dykes in a statement Friday.

While DEEP plans to issue full guidelines for pandemic beach etiquette, it’s recommended a minimum of 15 feet between beach blankets, groups of five or smaller, and wearing face masks “when in proximity to others.”

A report from the Associated Press was included in this post.