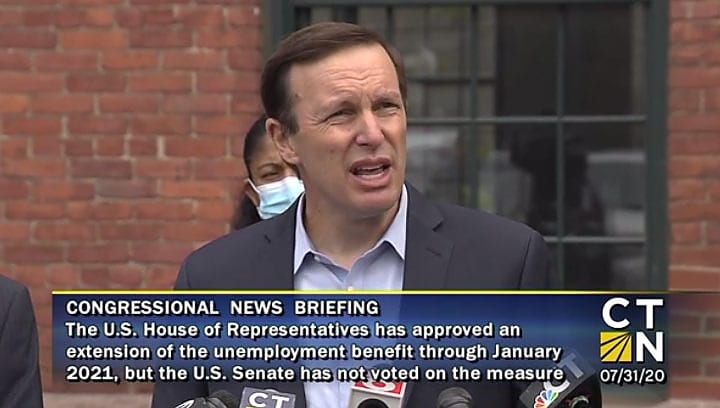 The Senate plans to reconvene Monday to address the bill.

Connecticut’s Democratic senators, Richard Blumenthal and Chris Murphy, returned from Washington to face constituents who are frustrated and concerned about the Senate’s failure to extend the $600 weekly unemployment benefits that were to expire Friday.

The $600 Pandemic Unemployment Assistance benefit passed the Senate this spring as part of the CARES Act to support those whose jobs were impacted by the pandemic. Democrats like Blumenthal and Murphy, as well as some Republicans, hoped to extend the benefits until the end of the year since the economic impact of the virus continues to worsen.

“My question for my Republican colleagues is, ‘What’s changed?’” Murphy said at a press conference Friday. “The CARES Act was enacted in the spring granting this additional unemployment benefit. It passed 96-0 in the United States Senate. What’s changed since 96 senators decided we needed to give people more unemployment compensation? I will tell you what’s changed. The virus has gotten worse.”

About 1.43 million Americans filed unemployment claims last week, according to the Department of Labor. This is a 12,000-person increase from the week before.

Senate Majority Leader Mitch McConnell held up the bill to extend the benefits in an effort to reduce the checks to $200 instead of $600 per week to encourage Americans to go out and get jobs. Blumenthal called the $200 option, “plainly inadequate” saying that the jobs are not available to find.

“It’s not even supported by a majority of Republicans,” Blumenthal said of the bill.

As a result, Blumenthal said that McConnell has resorted to kicking the can down the road. Thursday, McConnell floated the option of extending the current benefits for one week while negotiations continued.

“Short-term fixes from week-to-week is an administrative nightmare for the states to apply,” Blumenthal said. “It is costly, unreliable, and insecure. It enhances the anxiety of individual workers and businesses seeking to invest and wanting to move forward.”

Two women who lost their jobs as a result of the coronavirus also spoke at the press conference with Blumenthal and Murphy on Friday. They both attested that without the $600 weekly payments, survival will become difficult.

“The extended benefits allow me to maintain a decent lifestyle,” said Sebrina Wilson, a single mom from East Hartford. “If it ends today, with my rent, my food, my ability to have transportation, I am not going to be able to afford these things.”

Blumenthal said that he hopes his Republican colleagues will return home to their constituents this weekend and listen.

“If they listen, they will do the right thing and adopt the HEROES Act, which is on Mitch McConnell’s desk,” Blumenthal said. “His failure to recognize the economic reality of a collapsing and cratering economy is destructive and deeply dangerous to our whole country.”

The Senate will reconvene Monday to debate the bill before a two-week scheduled recess. Murphy and Blumenthal have been driving back and forth to D.C. to avoid exposure to the virus in airports or planes. Washington was recently added to Connecticut’s travel advisory list but Blumenthal said both he and Murphy tested negative in the past 72 hours.

“That has become inconvenient, but hearing these stories brings home to me that all of the comparatively minor burdens pale in comparison to the hardships these families have to endure,” Blumenthal said.