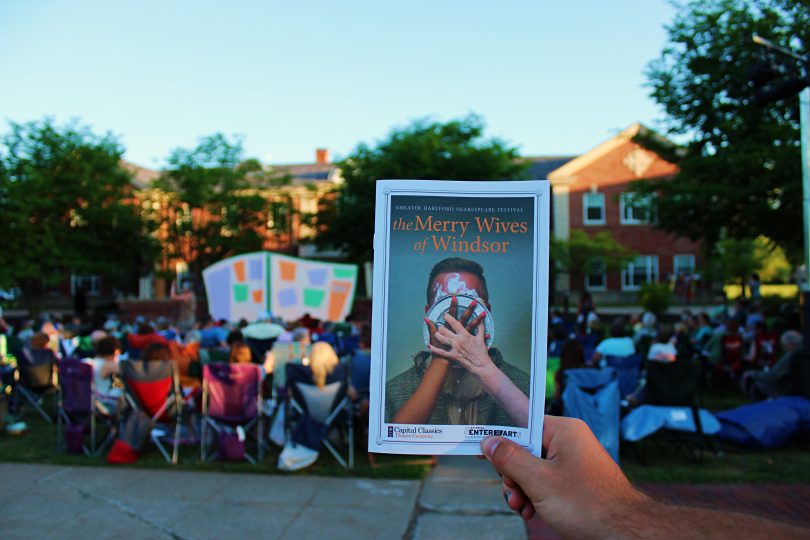 Capital Classics "The Merry Wives of Windsor" will run until July 28. Photo by Zoe Pierce.

Capital Classics rendition of The Merry Wives of Windsor will run through July 28 on the University of Saint Joseph lawn. 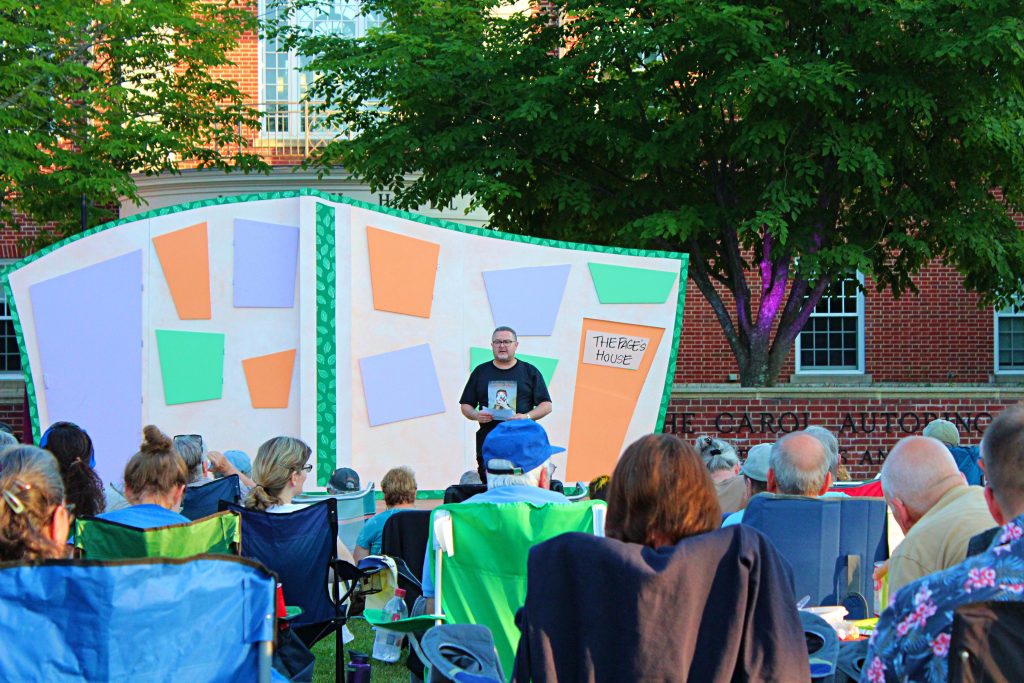 By Dexter McCann and Zoe Pierce

A gorgeous sunset was the backdrop for a night of laughs and culture Saturday, as spectators of all ages enjoyed Capital Classics performance of the Shakespearean comedy “The Merry Wives of Windsor.”

This year the festival, which highlights a different Shakespearean play every year, is being held until July 28 on the lawn of University of Saint Joseph. The program prides itself on making Shakespeare both accessible and affordable.

If Saturday night’s audience is any indication, this year’s festival, the 29th annual, will be the biggest and best yet. That’s certainly the hope of Edwin Thrower, the president of Capital Classics, who emphasized the idea of the festival as a cultural experience to be enjoyed by all. 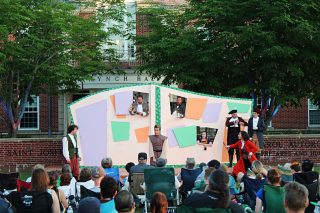 “Shakespeare wrote for the masses … he entertained everyone at multiple levels, and that continues today. Even people who aren’t keen on Shakespeare can have an enjoyable evening out, because it’s not just a play, it’s the atmosphere,” said Thrower.

That atmosphere couldn’t have been more perfect on a West Hartford-style summer night, and the University of Saint Joseph (USJ) lawn was packed to the brim with dedicated theatergoers and casually-curious fans alike.

Many attendees brought lawn chairs and blankets along with picnic baskets of cheese, crackers, and wine, so as to enjoy the play with maximum enjoyment.

Many of the families in attendance also brought their kids along for the show, something Thrower has taken a keen interest in.

“We’ve had kids last year in the audience, and this year I’m sure we’ll have more. They sit engrossed, and no one seems bored. They all seem to follow it.”

Thrower attributed much of that success to the Capital Classics cast, a diverse group of individuals spanning generations and races. 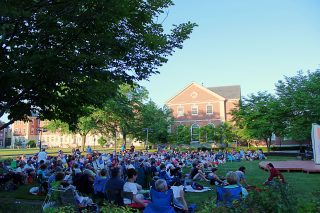 The Saturday night audience was filled with families enjoying the perfect weather and stand-up performance. Photo by Zoe Pierce

“Even with the 400-year-old English, Capital Classics in particular has a very good way with not just the language, but the body language of the humor.

“It’s how it’s played. It’s taking it from the page and breathing life into it. It’s literally living, breathing Shakespeare,” Thrower added.

That “living, breathing Shakespeare” was enticing to many of the play’s attendees. One family, residents of West Hartford, enjoyed last year’s production of Pericles so much that they wanted to return for “The Merry Wives of Windsor.”

“We had lived in other places and this was something we sought out, so to see something like this right down the street is really nice,” a member of that family added.

While many of the play’s attendees were from West Hartford, a good portion of those in attendance traveled from nearby towns to attend the play. A couple from Avon, who wished to stay anonymous, made the short drive over to West Hartford to enjoy the show, and raved about the festival’s atmosphere.

“It’s nice to see everybody having a good time here, and the more opportunities for people to be in and enjoy theater, the better,” the couple said.

When Thrower was asked about the audience and if younger generations are still attracted to Shakespeare, he didn’t miss a beat in expressing the continued timelessness of Shakespeares works. 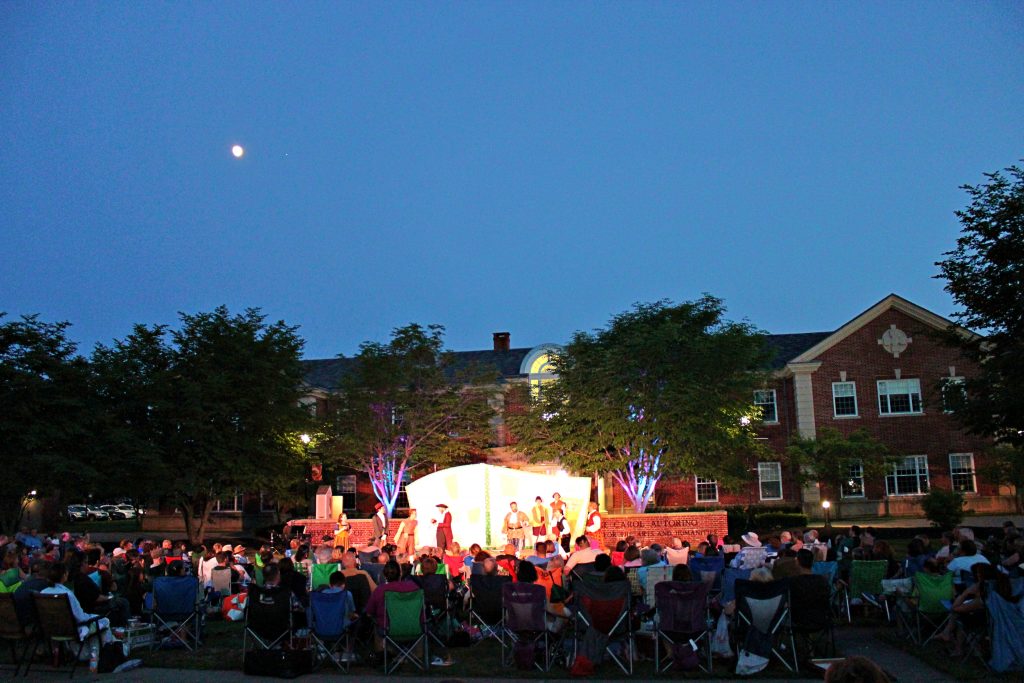 After the sun set over the lawn, the moon was perfectly visible over the stage. Photo by Zoe Pierce

“I think human nature then and now is very similar, we all laugh we all have that same sense of humor, whether it’s 400 years ago or it’s now,” Thrower said. “I think the basic themes that are underscored in this play continue right through into today which is why Shakespeare is still popular.”

Tickets to the upcoming shows are available on the Capital Classics website. In the event of rain, the show will be moved inside to the Autorino Center for the Arts and Humanities. 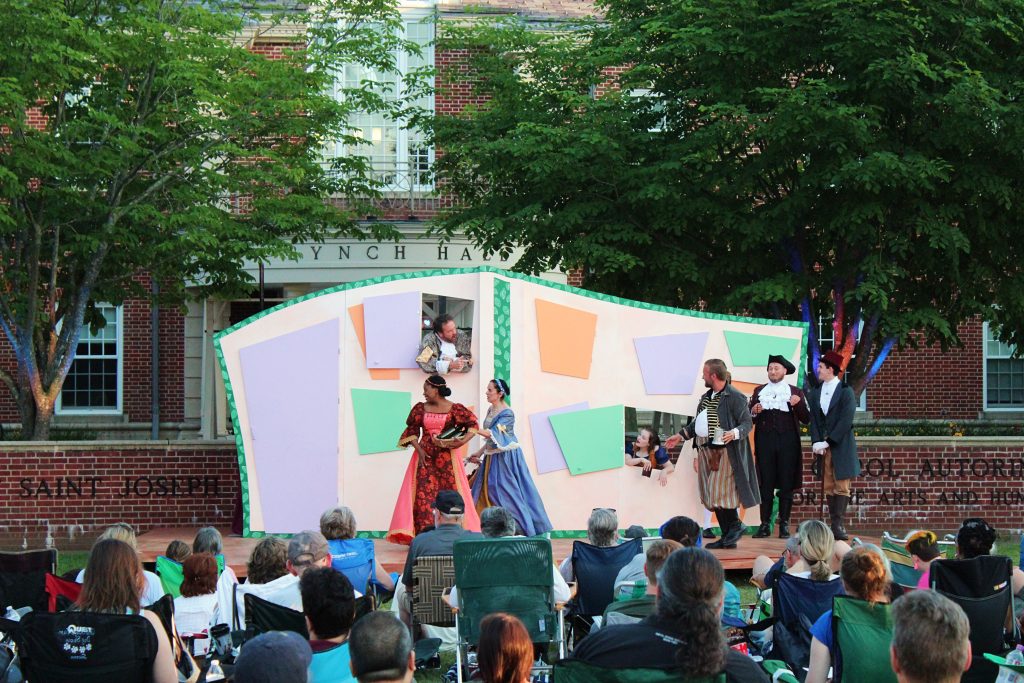 Saturday’s performance of “The Merry Wives of Windsor” was received by the audience with laughter and captivation. Photo by Zoe Pierce 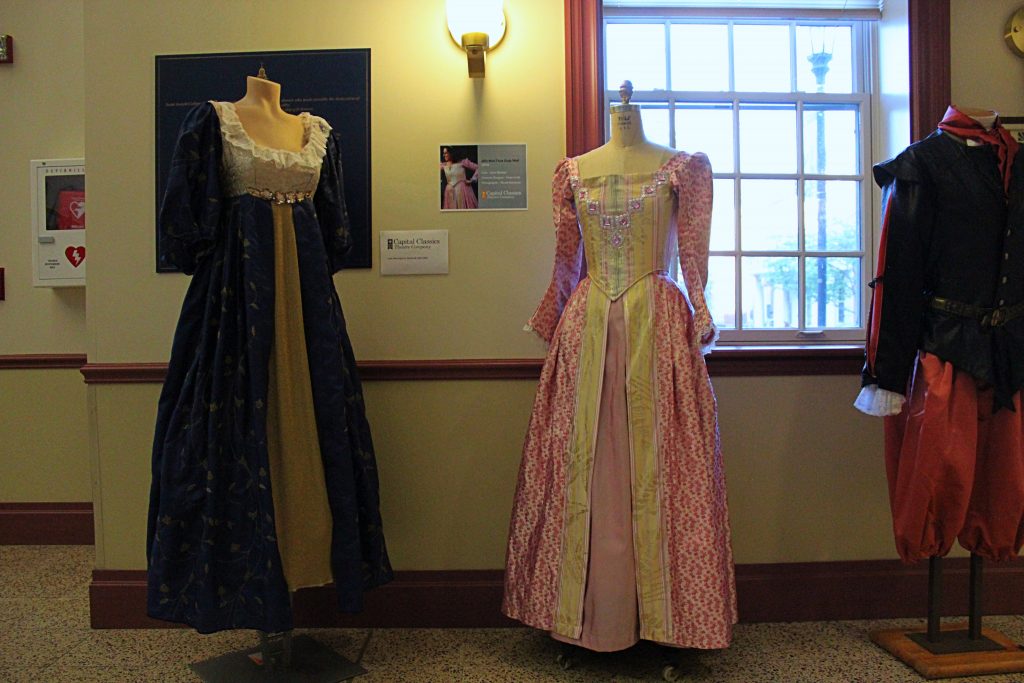 Costumes from past years put on display so the audience can admire the detail and quality of the pieces. Photo by Zoe Pierce