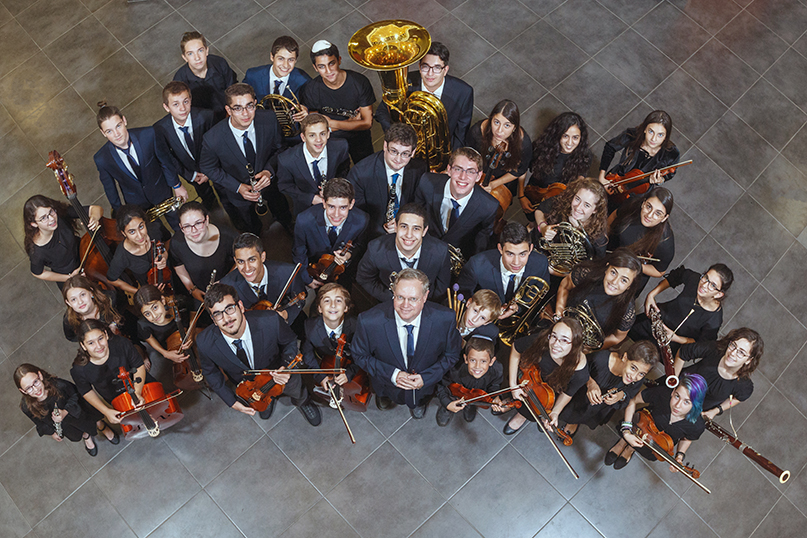 Only four years old, one of Israel’s leading youth symphonies has already won a prestigious international competition. Now, the talented orchestra is headed for Carnegie Hall … with a stop in West Hartford.

The Ma’ale Adumim Youth Orchestra (MAYS) will perform in concert at Carnegie Hall on Wednesday, Dec. 12 as part of a celebration of Israel’s 70th anniversary. But first … the young musicians will take to the stage at Beth El Temple in West Hartford.

The Youth Orchestra, part of The George W. Schaeffer Music Conservatory in Ma’ale Adumim, a West Bank city located on the outskirts of Jerusalem, is composed of musicians who are handpicked from school music programs. They continue their musical education at the conservatory and are taught by some of the country’s leading artists. Established just four years ago, they won their first international award at the Bratislava International Competition for Youth Symphonies.

Israeli, Dr. Benjamin Shapira, former head of the string and orchestral program at the University of Wisconsin-Platteville, directs the orchestra. Shapira returned to Israel to become administrator of the conservatory. In high demand as a cellist and conductor around the world, Shapira was declared by the United States government as an “Artist of National Interest.”

This will be the Ma’ale Adumim Youth Orchestra’s second performance at Carnegie Hall – they made their debut there in November 2015.

The orchestra’s Beth El performance will take place on Monday, Dec. 10 at 7 p.m. Dr. Benjamin Shapira recently shared the story of the Ma’ale Adumim Youth Orchestra in advance of their West Hartford debut.

JEWISH LEDGER (JL): You were orchestral director at the University of Wisconsin-Platteville for several years, but you left to return home to Israel to found the music school in Maale Adumim. What was your goal?

However, Israel did not have, at the time, access to the methodology used in order to teach public school children instrumental music effectively. I felt that while I was very happy personally in the U.S. – I had a thriving career as a cellist and conductor and held a very meaningful and fulfilling academic position – it was my duty to take upon myself a mission to introduce modern methodology of public school instrumental music education to the Israeli education system.

The Ministry of Education in Israel decided to make a pilot program in Maale Adumim and we indeed started teaching orchestra and band in the school system there. The Maale Adumim Youth Symphony as well as the entire Maale Adumim School of Music draws its students from the public school orchestras and bands and operates just like any American youth symphony.

JL: Tell us about the make-up of the orchestra – who are these young people? What is their range of musical abilities? What kind of musical training do these kids receive at the music school?

BS: The George Schaeffer School of Music was founded in September 2007. It accepts selected exceptional students from the school system in Maale Adumim, identified typically from the city public schools’ orchestras and bands via a very exhaustive selection process. In our school, students get weekly one-hour individual lessons from the most prominent teachers in the state – our faculty includes the principle players of the Israeli Philharmonic Orchestra and other prominent orchestras in Israel as well as faculty members from the Jerusalem and Tel Aviv Music Academies. In addition, every student in our school attends a weekly theory class and participates in one of our orchestras or bands. Members of our top orchestra – the Youth Symphony – also receive weekly chamber music lessons.

Naturally, the cost of employing a faculty such as ours and providing students with such a complete program is very high. Most of the community in Maale Adumim is lower middle class and is not able to afford such high costs. The school is therefore highly subsidized by the municipality and is supported also by the Israeli Ministry of Education. We are therefore limited financially to a maximum of 330 students. We currently have a waiting list of some 400 applicants that we unfortunately cannot accept at this time.

JL: How many students are there in the Youth Symphony? How are they selected to be in this symphony?

BS: The Youth Symphony is the pinnacle of the George Schaeffer School of Music. It holds some 50 young artists carefully selected from our school. The orchestra members receive special attention from our top faculty. They attend two four-hour rehearsals every week, do weekly sectionals and work during all the holidays is full days’ sessions. Most of our youth symphony members also participate in chamber music groups – each chamber group is expected to do at least two weekly rehearsals on their own and receive a weekly two-hour lesson with one of our senior faculty members, who as I stated before, are typically principle players of the Israeli Philharmonic.

JL: The symphony’s upcoming appearance at Carnegie Hall is an “encore” performance – given that they played at the world-renowned music hall in 2015. What will it be like for the orchestra to return to the scene of its triumph?

BS: I believe the Youth Symphony was two years old when we first performed at Carnegie Hall. Indeed, some of the then younger musicians are still with us! Immediately following their performance, they were extended an invitation to return. It took us some three years since to make all the necessary arrangements. As the orchestra is very dedicated and keen on its own success they naturally work very hard and we are very hopeful they will do just as well on this performance.

We are also delighted that we have the opportunity to collaborate with the Ramaz School [for the Carnegie Hall performance]. We feel it is very important for our young artists to meet with Jewish communities in the U.S. and in particular to collaborate and mingle socially with young Jewish artists from American communities.

JL: What does traveling to another country and performing in a place like Carnegie Hall mean to these young musicians?

BS: Naturally, performing at Carnegie Hall and in other concerts in the U.S. provides our young artists with an enormous incentive to invest in their development. While they are very invested, they are still young and are susceptible to all the temptations the modern world can offer them. Complying with the orchestra’s very strict requirements takes a great toll on them. An opportunity such as this tour focuses them and encourages them to continue and make all the sacrifices necessary for their own future success.

JL: How did the performance at Beth El Temple in West Hartford come about?

BS: We feel it is very important for our young members as Jews and as young Israeli citizens to be exposed to the Jewish community in the U.S. These children typically do not have the opportunity to mingle with sister communities from outside of Israel. It is very important for their growth as part of the Jewish people. For this reason, we approached the Beth El community and offered a collaboration. We are delighted and most appreciative of the opportunity to perform for this wonderful community.

BS: Unfortunately, the orchestra never had any previous experience performing in a Jewish sanctuary before. But I did have that honor and unique pleasure several times in my career – this is a unique performing experience. I have always believed that music, as a pure manifestation of mathematical perfection, is divine – a great composer only copies what is inspired upon him/her. We the performers are further down the line – we just try poorly to execute physically with our limited instruments and ability that which is in essence pure, complete and perfect – the words of God, if you will. Doing so in a house of prayer is indeed unique. Also, performing among my own people outside of Israel has always been a wonderful and fulfilling opportunity for me. I am sure that my children will feel the same way.

JL: Will you be playing anywhere else in the U.S. before returning to Israel?

BS: Unfortunately, due to financial constraints this trip is very short – only four days long. I am afraid that these two concerts will be all we can do this time. We do hope for the opportunity to return to the U.S. soon and perform more.

JL: Has the school’s West Bank location impacted the Youth Orchestra in any way – for example, has it’s performance schedule been stymied by the BDS movement?

BS: Maale Adumim is a city located some 5 miles south east of Jerusalem, the Capital of the State of Israel. It plays a vital role in protecting the capital. The city was built on the ruins of a Biblical Jewish village mentioned in the Bible as the most important settlement protecting the main road from the Jordan Valley to Jerusalem, a role it still plays today. Be that as it may, we never see ourselves as anything other than an aspiring Jewish Youth Symphony, full to the brim with talented and hardworking young artists.

This article first appeared on www.jewishledger.com. Reprinted with permission.