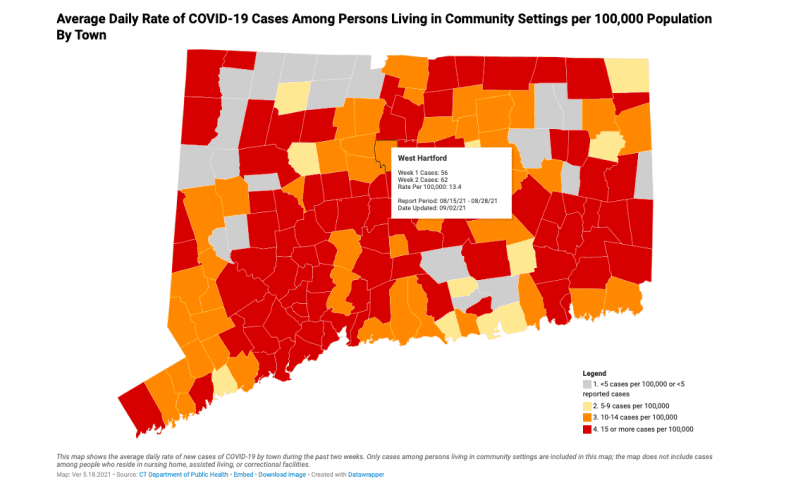 West Hartford dropped last week from ‘red alert’ to ‘orange’ status based on the average number of cases per 100,000 of population, and based on current case counts is likely to remain at that level when the metrics are updated on Thursday.

Connecticut’s COVID-19 metrics continued a slow and steady decline Tuesday in a reprieve before what officials fear may be another spike driven by the holiday weekend and the return of students to classrooms around the state.

The state’s infection rate dropped to 2.6% Tuesday as Connecticut added another 1,612 confirmed cases of COVID-19 over the long holiday weekend. That’s a modest decline from Friday, when the state reported a daily infection rate of 2.73%, and a significant drop since last Tuesday when the positivity rate had jumped to 4.65%.

There were 23 new positive cases among West Hartford residents over the holiday weekend, according to data reported Tuesday by the state.

The statewide numbers suggest that the recent surge, driven by the more transmissible delta variant. has begun to subside. Hospitalizations, which had crept as high as 391 two weeks ago, also declined by two over the weekend to 363.

On Tuesday, Gov. Ned Lamont was cautiously optimistic about the current trends, but worried about the heightened opportunities for transmission recently and in the coming weeks.

“The numbers have sort of stabilized in terms of infections. What I worry about is Labor Day parties, kids going back to school, college football games. We’re going to stir the pot at least one more time between now and being out of the woods,” Lamont said. “But I think the trendline is positive.”

He said he knows that COVID “follows the flu season” but right now “the trendlines are pretty good.”

On the first dashboard posted by West Hartford Public Schools since classes resumed last week, the district reported five cases – three at Hall High School, one at Sedgwick Middle School, and one at Smith STEM School. A total of 29 individuals are currently in quarantine. The district does not indicate whether or not the cases or people in quarantine are students or staff, and vaccination status is also not provided.

Lamont talks to Gottlieb, a Connecticut resident, on occasion.

“I think there’s sort of a perception that we’re sort of through this delta wave here in the Northeast because we’ve seen delta cases go up and go down in places like the New York metropolitan region. We’re also seeing [test] positive come down,” the former Food and Drug Administration commissioner said on CNBC’s “Squawk Box.”

Connecticut continues to be among the states with the highest uptake of the COVID-19 vaccine. As of Thursday, the state reported more than 2.26 million residents had been fully vaccinated, adding 21,773 over the previous seven-day period. According to the Washington Post, 66.6% of Connecticut’s total population had completed the vaccine cycle, putting the state second to only Vermont, where 68.3% had.

Among West Hartford residents, 78.81% of the total population has received at least one dose of a COVID-19 vaccine, according to the state’s most recent report.

West Hartford Public Schools will be hosting vaccination clinics on Sept. 9 and Sept. 30, from 9-3 p.m., at both Conard and Hall high schools, for students ages 12 and older. Consent forms are required for anyone under age 18. According to the state, as of Sept. 1, 80.72% of West Hartford residents ages 12-17 are already fully vaccinated, with 88.75% having initiated the process.

Over the last reported seven day period, Connecticut reported 1,496 breakthrough cases of COVID-19 in fully vaccinated people but found that unvaccinated people were at 7 times higher risk of dying from the virus than people who had been inoculated.