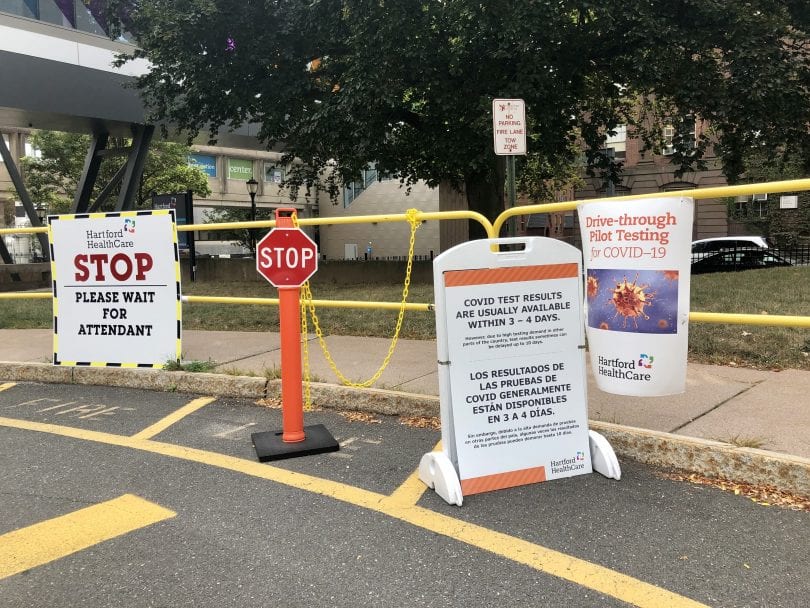 There is no statewide guidance on how quickly hospital patients, particularly those who are high-risk, healthcare workers, and first responders should get their results back.

Just days later, the Portland resident and his family spent a tense 48 hours waiting for COVID-19 test results for his 28-year-old son, Andrew, who has cystic fibrosis.

Andrew Kobylarz was brought to Middlesex Hospital Thursday with symptoms two days after his grandfather had passed away. But he didn’t find out conclusively that he was negative until Saturday afternoon, his father said.

“There’s no priority for testing healthcare workers, first responders and hospital patients,” said Jeffrey Kobylarz, a former firefighter. “The system is getting clogged with people who are wondering if it will be okay to go to so-and-so’s house for Thanksgiving. There should be some type of prioritization.”

As the number of tests and positive COVID-19 cases escalates in Connecticut, there is no statewide guidance on how quickly hospital patients, particularly those who are high-risk, healthcare workers and first responders should get their results back, officials confirmed.

Hartford HealthCare, which oversees thousands of employees and patients at hospitals and facilities throughout the state, won’t be unveiling a plan to get symptomatic staff tested and the results back as quickly as possible until this week.

One employee said she called out sick on Nov. 16 because she felt like she had a cold. By Tuesday morning, her symptoms had worsened so she called the Hartford HealthCare hotline to line up testing but never received a call back.

“By 7 a.m. the next morning I was calling them again,” said the woman, who declined to be identified out of concerns for her job. “They said they had been busy but would call back.”

Three hours later, she was notified where to go for a test, she said. She then waited in line for 3 hours and 45 minutes to have the sample collected. After another four days, the employee was still waiting for her test results, she said.

“There needs to be separate testing for high-exposure people,” she said.

Union members working at Backus Hospital in Norwich usually get their tests back in 24 to 48 hours, said Sherri Dayton, president of the Backus Federation of Nurses, Local 5149.

“That is something we fought for,” Dayton said of access to testing with quick turnaround times. Other locations within Hartford HealthCare such as Hartford Hospital are not unionized and nurses don’t have the same protections, she said.

Officials including Gov. Ned Lamont’s chief operating officer, Josh Geballe, declined to comment on whether the state had issued guidelines to hospitals on prioritizing testing and test results for patients and employees.

But Geballe said Connecticut is consistently in the top 10 states per capita in testing and the high volume is leading to some lag time in getting results back. “The turnaround time for lab results continues to be solid overall, with the statewide median at 48 hours and more than 75 percent of tests coming back in less than three days. This is up slightly in the last week but the main challenge we are experiencing is at point of sample collection,” Geballe said.

The state is averaging more than 30,000 tests per day in the past few weeks, Geballe said.

Middlesex Health, which runs Middlesex Hospital, is seeing test results for patients and those who are scheduled for surgery come back in two, or more often, three days, said Carol Beatman, laboratory director.

For all others, test results are coming back in four to five days, with most coming in closer to five days, Beatman said. “I think it’s going to get worse,” she said.

All Middlesex tests go to Quest Laboratories for processing, she said. It’s the lab that determines that hospitalized patients and patients waiting for surgery are the top priorities, Beatman said.

“Quest is making those decisions,” Beatman said. “Those are the priorities along with nursing home patients which are also considered priority one.”

Employees of Middlesex Health are not prioritized or fast-tracked, she said. Early on, healthcare workers had been a priority three, she said. But that designation has been dropped, Beatman said.

“There aren’t enough resources to meet the needs,” she said. “We are seeing this across the country.”

Hartford HealthCare was not separating or prioritizing symptomatic employees because it wasn’t an issue, said Dr. Mitchell McClure, clinical executive leader for COVID testing for Hartford HealthCare. “We haven’t needed a separate process until recently,” McClure said. “Right now we’re creating a separate workflow to create easier access for employees. We are caught in a huge demand for testing but there wasn’t any wait time up until this month.”

Hartford HealthCare has been conducting 3,000 to 5,000 tests a day at nine drive-through sites and at various mobile testing events at homeless shelters and in other underserved areas, McClure said. Some of the tests are processed at the Hartford HealthCare lab while others are sent out.

McClure maintains that the vast majority of tests are returned in three days. “What we see every time there is a spike in demand is that the turnaround times get longer,” he said. “But thus far they have been keeping up pretty well.”

Jeffrey Kobylarz was concerned by Saturday morning when his son’s test hadn’t come back yet. The funeral for his father was approaching on Monday. He didn’t know if he and his wife should get tested in advance of the funeral since he didn’t know whether his son was going to test positive. “How were we going to find out quickly?” he said.

Andrew was scared, he said. He had been on the Facebook call with the rest of the family to say goodbye to his grandfather, Jeffrey Kobylarz said. The hospital wasn’t allowing visitors, so Jeffrey hadn’t seen his son since Thursday when he dropped him off at the Emergency Department.

“There should be some type of prioritization,” Kobylarz said. “It should be a matter of importance.”