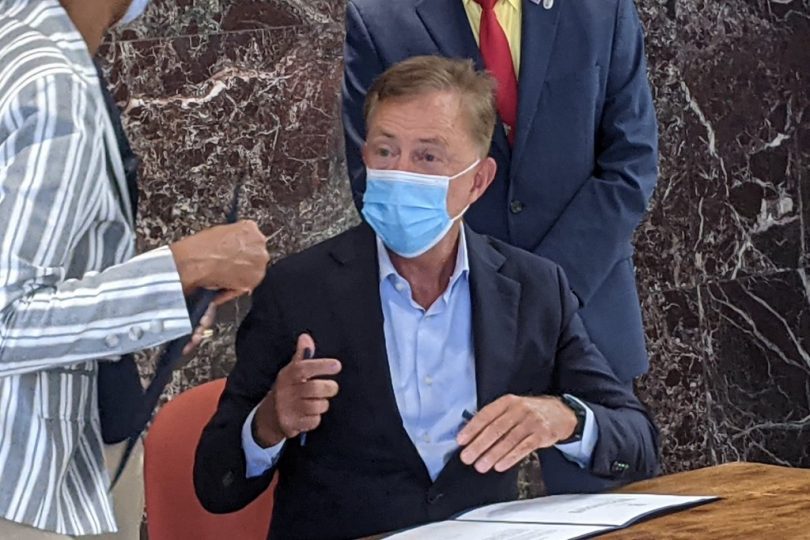 The requirement will take effect on Sept. 27.

State workers and K-12 teachers will need to be vaccinated against the COVID-19 virus by Sept. 27 or consent to weekly testing requirements under an executive order announced Thursday by Gov. Ned Lamont.

The order will impact teachers and staff at both public and private schools, early childhood staff, executive branch workers, and employees at all state hospitals. The administration said the judicial branch is expected to follow suit and legislative management was considering a similar requirement.

The new policy, announced during an afternoon press conference, allows state workers who do not wish to be vaccinated to seek exemptions either for medical reasons or their religious beliefs.

“Go get vaccinated if you haven’t been vaccinated,” the governor said. “Obviously there’s a religious exemption, there’s a health exemption – a medical exemption as needed and finally, if you’re not confident yet, you can test out. Use one of our testing facilities on a weekly basis and show you’ve been tested. That’s a lousy solution. The best solution is for everybody to get vaccinated. The vaccines work. They’re safe.”

The administration negotiated the requirement with the State Employees Bargaining Agent Coalition, a group of unions representing state workers. In a statement, SEBAC acknowledged the administration’s authority to issue the order but demanded “effective immediately” to bargain over the requirement’s details and impact.

“SEBAC is a strong advocate of doing all we can to protect the safety of members and the public in these unprecedented times,” the statement said. “We recognize that under state and federal law, the employer has the right to create such mandates, subject to the duty to bargain its impact on employees, and we will continue to fight for safety in the workplace and the rights of each and every individual employee.”

The University of Connecticut said Wednesday it would require the vaccine or testing of its employees at its campuses as well as at UConn Health facilities.

The administration could not estimate how many as-yet unvaccinated state employees the order would impact but expected to have more information soon as the order required workers to provide proof of vaccination. The governor estimated that around 75% of K through 12 teachers had already been vaccinated.

Employees who refuse to be vaccinated or tested will not be permitted at their work sites, Josh Geballe, Lamont’s chief operating officer, said. Resulting discipline will depend on the worker’s contract.

Employees who seek an exemption and opt for the weekly testing alternative may be required to pay for the testing, depending on their health insurance and work contract. At the moment, the state employee health care plan does not cover asymptomatic testing, meaning workers who opted against vaccination would be on the hook for the cost of testing. However, the administration noted that could change during collective bargaining.

The announcement comes as the more-infectious Delta variant of the virus continues to fuel a surge of new infections along with subsequent hospitalizations and deaths. As of Thursday, the state infection rate was at 3.37% and 344 people were hospitalized with the virus. Over the past week, the state added another 23 COVID-related deaths.

Meanwhile, more than 22,000 people chose to take the first dose of a vaccine during the last seven days. During Thursday’s press conference, Lamont pointed to statistics showing vaccinated people were less likely to experience severe outcomes as the disease continues to spread throughout the state. As of Thursday, the Centers for Disease Control considered Fairfield, Hartford, Middlesex, New Haven, and New London Counties to be high transmission areas. 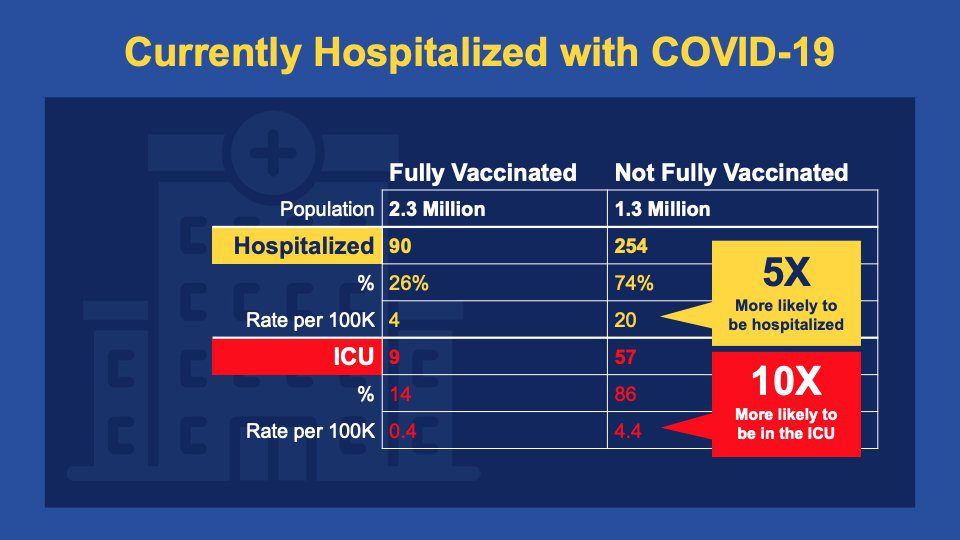 “You’re five times more likely to be hospitalized and suffer complications if you’re not vaccinated than if you are vaccinated,” Lamont said. “There are some examples of breakthrough. There are nine people who are vaccinated who are in the ICU but that’s nine out of 2.3 million. Keep things in perspective.”