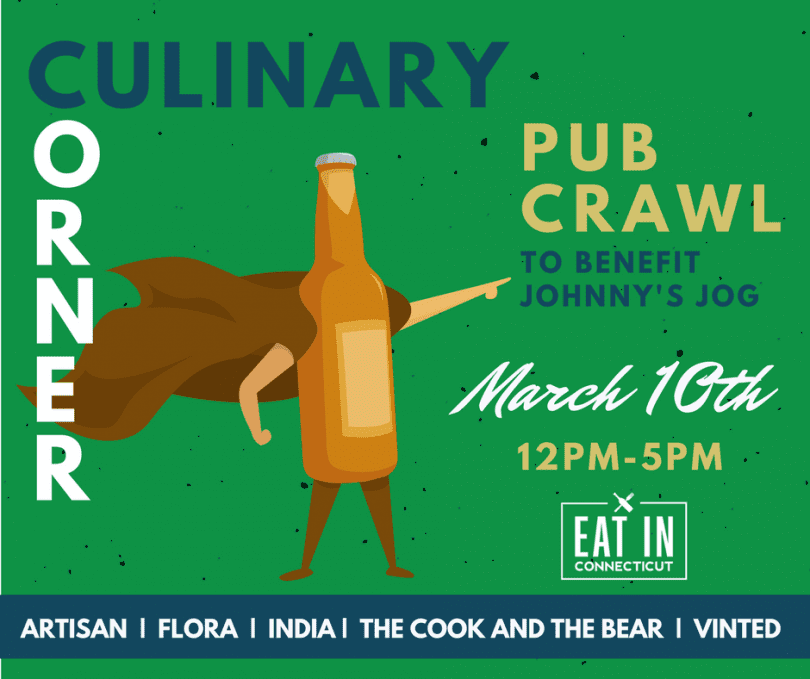 Eat IN Connecticut will host another Culinary Corner Pub Crawl for a Cause, this time benefitting Johnny’s Jog, in West Hartford’s Blue Back Square on Saturday, March 10.

If you missed out on January’s inaugural “Culinary Corner Pub Crawl” hosted by social media influencer Eat IN Connecticut, you’ll have another chance on March 10 from noon-5 p.m.

Participants are invited to sip and stroll through some of West Hartford’s most premier restaurants and taverns to raise funds for Johnny’s Jog.

“Our first Culinary Corner Pub Crawl was incredibly well received,” said Jeannette Dardenne, co-founder of Eat IN Connecticut. “Participants were asking when the next one would be, even before the initial crawl had come to an end! We are thrilled to organize this second crawl and our partner with an incredible local charity like Johnny’s Jog.”

The Culinary Corner Pub Crawl will be held from noon-5 p.m. and will include five of West Hartford’s top restaurants which reside in the corner of the Blue Back Square area: Vinted, INDIA, The Cook and The Bear, Flora, and Artisan – located across the street at the brand new Delamar Hotel.

The Culinary Corner Pub Crawl will once again be an open format, where participants can sip and stroll from restaurant to restaurant at their pleasure. Participants with bracelets will get access to half-off drinks at each establishment or food and drink specials.

Eat IN Connecticut is a premier social media influencer group dedicated to supporting and sharing Connecticut’s food and beverage scene, while helping to raise funds for local and statewide charities

Tickets may be purchased in advance through Brown Paper Tickets for $15 from now until March 10 at 10 a.m. Tickets may also be purchased at the door for $20. A portion of proceeds from each bracelet will benefit Johnny’s Jog.

Johnny’s Jog for Charity is inspired by the short but powerful life of Johnny Moran. Johnny was born with Wieacker Wolff Syndrome, a rare debilitating condition that affects the central and peripheral nervous systems. Johnny’s spirit of strength and love rose far above his many limitations. His positive attitude toward life affected all who came to know him. The goal of Johnny’s Jog for Charity 5K is to continue to share Johnny’s spirit by bringing the community together with a grand St. Patrick’s Day themed event benefiting three local nonprofit children’s charities. The eighth annual Johnny’s Jog will be held on Sunday, March 25, 2018. Click here for more details about the event.