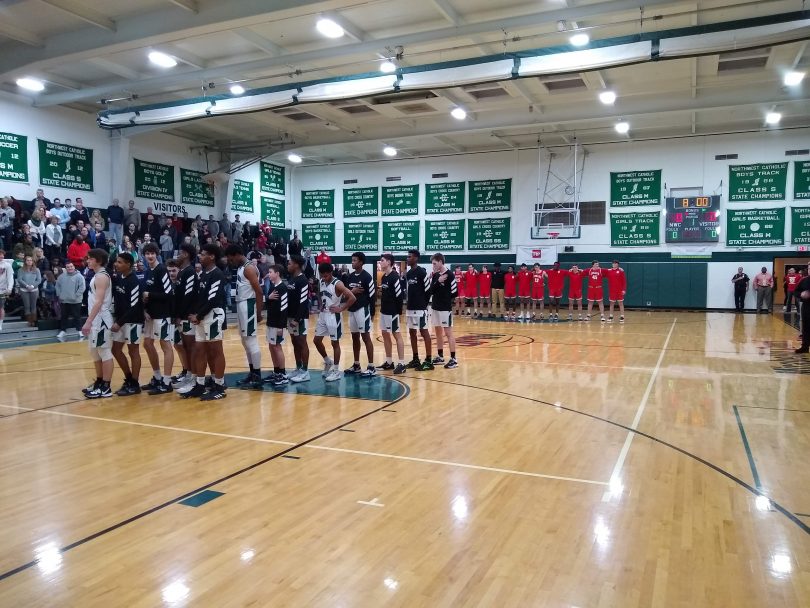 Led by sophomore Matt Curtis’ efficient shooting, No. 4 Northwest Catholic cruised past crosstown rival No. 13 Conard 62-32 in the first round of the Central Connecticut Conference Tournament Thursday night in West Hartford.

Curtis paced the Lions with a game-high 27 points, while Selwyn Paul and Landell Green chipped in 12 each. Strong team defense mattered most for Northwest Catholic, however, according to head coach John Mirabello.

“I think the intensity on the defensive end made it comfortable for them on the offense,” Mirabello said. “We have to play well defensively in order to do good on the other end, so I’m just so pleased with the intensity and the teamwork … I’m really proud of the guys.”

Arsen Shtefan made a layup to put Conard on the board first, but Northwest Catholic made consecutive 3-pointers to take a 6-2 lead at the 5:46 mark. The Lions went on a 9-3 run late in the quarter to double up the Chieftains 22-11.

Northwest Catholic stood tall defensively, only allowing Conard three points in the second quarter. The Lions stretched their lead to 37-14 heading into halftime as Green made a layup two seconds before time expired.

Curtis went on a fast break and threw down a two-handed dunk for the Lions 31 seconds into the third quarter. Conard scored 15 points in the period but couldn’t cut into Northwest Catholic’s sizable lead, heading to the fourth quarter down 53-29.

Curtis again scored first for the Lions, making a 3-pointer to push the lead to 56-29 with 7:18 remaining. Paul and Green added buckets in the fourth quarter, ending the night for Northwest Catholic’s starters with a comfortable advantage. Connor Olechna led the Chieftains with 10 points.

With the win, Northwest Catholic defeated Conard a third time after sweeping the regular-season series. Although the Lions won both prior matchups, Curtis said their approach mirrored the first game, a 57-29 home win on December 23, rather than their January 27 meeting where the teams went to overtime.

“We just tried to approach it more like the first game,” he said. “In the second game, I feel like we didn’t come as prepared and we underestimated them. In the first game we won by, like, 30 and we just took this game very seriously and approached it as a team.”

Despite the margin of defeat, Conard head coach Jared Leghorn said facing one of the CCC and Division III’s top teams was a valuable experience in preparation for the state tournament. The Chieftains will host a first-round state playoff game on March 9.

“This is so much more meaningful than a couple practices this week because the gym is packed, you’ve got the pressure of what a tournament game is like,” said Leghorn. “So now when we go in against Plainfield on March 9, we already have this under our belt – that type of environment and what you’re feeling inside in a tournament game.

“Hopefully we can be a little bit more disciplined and locked in, and it’s going to obviously help that we’re on our home court. We were 8-2 there this year. It’s a different game there.”

Northwest Catholic will face No. 5 Manchester in the CCC quarterfinals Saturday at 11 a.m. at Bulkeley High School. With a possible matchup against either the Red Hawks or No. 12 Southington at the time of the Lions’ victory, Mirabello said the team’s goal is simply to survive and advance no matter the opponent.

“You get to the next of round of the playoffs – wherever, any level – it’s gonna be good teams waiting there,” Mirabello said. “Either somebody’s on a hot streak and playing well or somebody’s just really good. … We’re just excited to be playing in the next round. That was the focus here.

“We had the rivalry stuff during the year, but when it gets to this point, you’ve gotta focus on getting the job done so we can play the next game.”