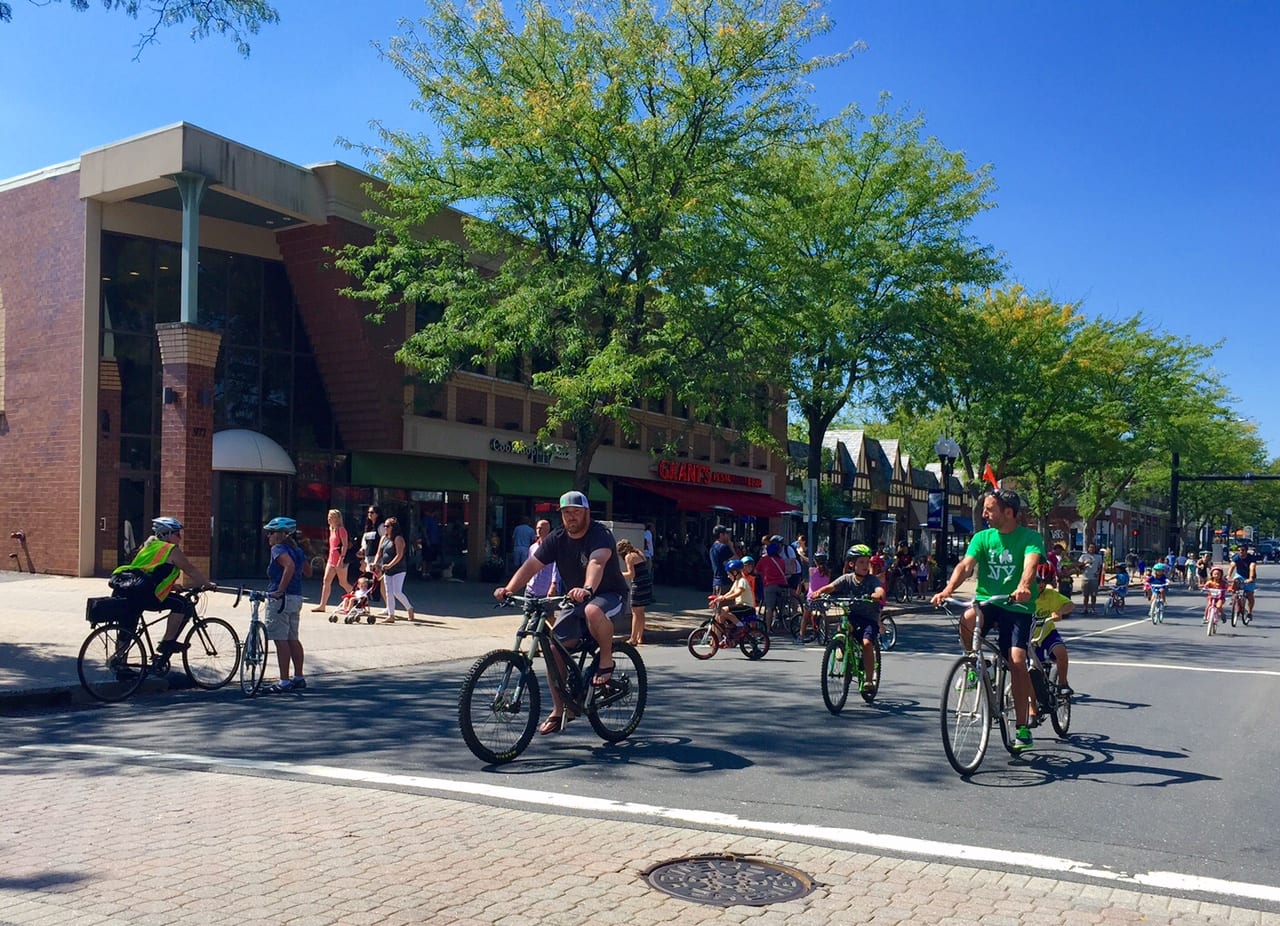 A loop around West Hartford Center’s central business district will be closed to vehicular traffic for a few hours on Sunday Aug. 27 for the town’s second annual ‘Center Streets.’

Bicycles, scooters, skateboards, strollers – and feet – will be the only acceptable modes of transportation on several of West Hartford Center’s main roads on the morning of Aug. 27 as people of all ages enjoy a “care-free and car-free” summer morning at West Hartford’s second annual “Center Streets” event.

Organizers said that an estimated 2,000 people participated in the inaugural event last summer, and a larger crowd is anticipated this year.

Center Streets – the signature event of Bike West Hartford, Inc. –  will run from 9 a.m.-1 p.m., and will also feature a “bike rodeo” and free bike registration courtesy of the West Hartford Police Department.

“Our first year of Center Streets was beyond amazing,” co-organizer Ethan Frankel said in a news release announcing this year’s event. “We were thrilled with the massive turnout and everyone wearing smiles.”

Frankel said that the initial family-friendly festival was was inspired by car-free summer events like Summer Streets as well as others held elsewhere around the globe. He, and local residents, are looking forward to Center Streets returning for a second year.

“We would love for it to become an annual summer event, with support from the Town of West Hartford,” co-organizer Edward Pawlak said in the release.

Local merchants and businesses will be open, with many offering brunch specials, free surprises, and discounts. Live music will play all morning.

Organizers said that children will also be encouraged to play in the streets engaging in activities such as hula-hoop, chalk drawing, and jump rope.

Although the Department of Public Works as well as West Hartford Police will be involved in shutting down the roadways and ensuring participant safety, Center Streets is a public-private partnership and is not being paid for by tax dollars. Whole Foods in the principal sponsor for this year’s event, and other financial support is being provided by United Bank, West Hartford Police Officer’s Association, Scott Franklin & Associates, Inc., Farmington Savings Bank, Bloomfield Bike Shop, Filomeno & Co., Thomas Fahy Insurance, Keating Agency Insurance, Berkshire Bank, Simsbury Bank, Connecticut Ecosystems LLC, the MDC Water Wagon, Daniel Johnson, Dan Firestone, and the Frankel Family.

The event is the signature community initiative of Bike West Hartford, Inc., a non-profit organization that advocates for bicycle-friendly policies and programs in town and is focused on the development of bicycle infrastructure and education within West Hartford.