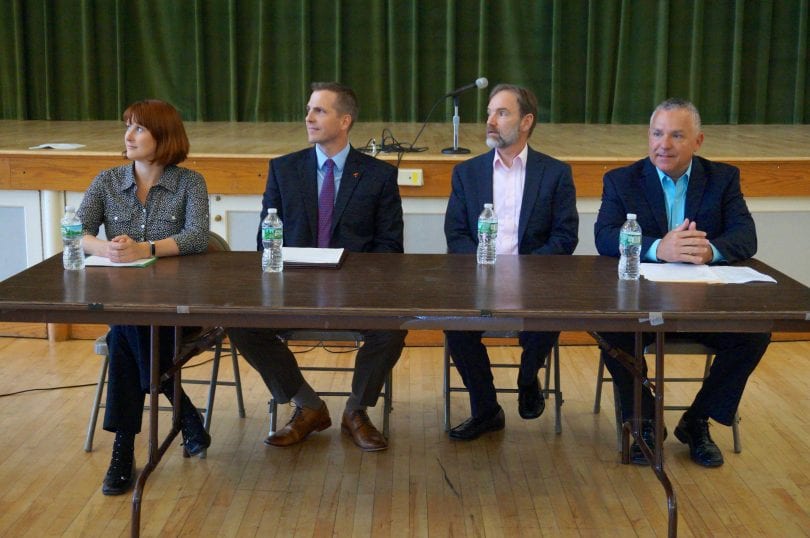 A recent forum held at West Hartford Town Hall, and organized by Ryan Keating of Keating Agency Insurance, brought different perspectives to the discussion of distracted driving in a forum designed to be moving and inspirational. 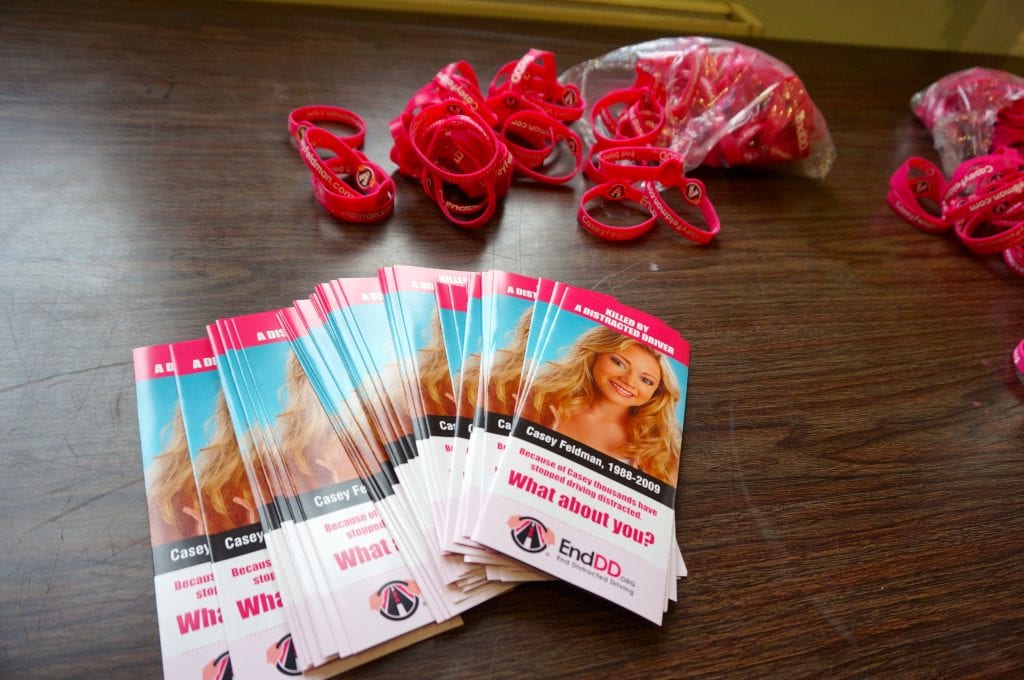 Pamphlets and bracelets were handed out by Joel Feldman at the distracted driving forum. Photo credit: Ronni Newton

The image was as striking as it was heartbreaking.

Philadelphia attorney Joel Feldman pulled up the sleeves of his shirt at West Hartford Town Hall’s auditorium on June 27 during a “Say No to Distracted Driving” panel discussion to reveal dozens of multicolored armbands, each one commemorating someone who died as a result of distracted driving – a term defined as someone who is using their cellphone in some capacity, eating and drinking or talking to people, while behind the wheel.

Feldman’s arms looked like two rainbows of grief – his right arm was reserved for female victims, his left arm for males.

One armband on his right arm was lavender, another was lime-colored for someone who was eight-and-a-half months pregnant, killed by a driver who was using his cellphone.

A pink armband on Feldman’s right arm represented the loss of his 21-year-old daughter Casey, who was killed by a distracted driver in 2009.

“I used to drive distracted all the time,” Feldman admitted to the audience after the panel discussion. He stopped after his daughter was killed, when he realized that he was part of the problem.

Feldman, who is founder of End Distracted Driving and gives talks to schools, businesses, and community organizations across the country, said that he is often approached by parents, mostly mothers, who give him the armbands.

“I remember their faces,” he said. “We hug and cry a little bit together.”

But then one parent of a teen who was killed in an accident while she was texting asked the question: “My daughter was texting at the time. She saw me do it all the time. … Do you think she learned it from me?”

Feldman shrugged at the audience. When he goes into schools to give talks, Feldman asks the kids to raise their hands if their moms and dads drive distracted.

“Seventy-five to 80 percent of the hands go up,” Feldman said. “I tell them if your moms and dads drive distracted you don’t have to drive like moms and dads. What does that say?”

Feldman said that the best way to get someone to stop driving distracted is to make it personal. If you are a passenger in a car when someone is using their cellphone while driving, Feldman said, then saying something like, “I don’t feel safe when you drive while texting,” is more effective than an admonishment like, “You shouldn’t drive while texting.”

“Telling them you care about them and how you feel is the important thing,” Feldman said. “How you feel is tough to hear. … I don’t feel safe driving with you because you use your phone.”

Feldman went out to the audience and spoke to a few parents who brought their teenage children with them to the event.

Instead of focusing on the teenagers’ habits, Feldman would ask the kids if their parent drove distracted. Some said yes.

“Good. You brought your father here because you’re worried about his behavior behind the wheel,” Feldman said.

His message was clear. The best way for parents to ensure their children don’t drive while distracted was to end the practice themselves.

Prior to Feldman’s presentation, panelists Amy Watkins, the pedestrian safety coordinator for Watch for Me CT; Peter Gulbrandsen, vice president and national auto lead for personal insurance at Travelers, and State Rep. Joe Verrengia all discussed ways to reduce distracted driving. Feldman was also a panelist.

Gulbrandson recommended several phone apps such as Mojo to reduce distracted driving. Also, iPhones have a feature that enable the user to shut off receiving texts while their driving, Gulbrandson said. He also recommended the documentary “3 Seconds Behind the Wheel,” which follows the behavior of eight drivers over a six-month period, revealing some alarming behaviors

Verrengia, a retired West Hartford police officer, said that the state administers a media campaign through the Department of Transportation: You Text. You Drive. You Pay. Enforcement periods during April and August further attempt to curb distracted driving.

The statistics, according to Keating, are breathtaking:

For more information and resources about raising awareness about the dangers of distracted driving, click here. 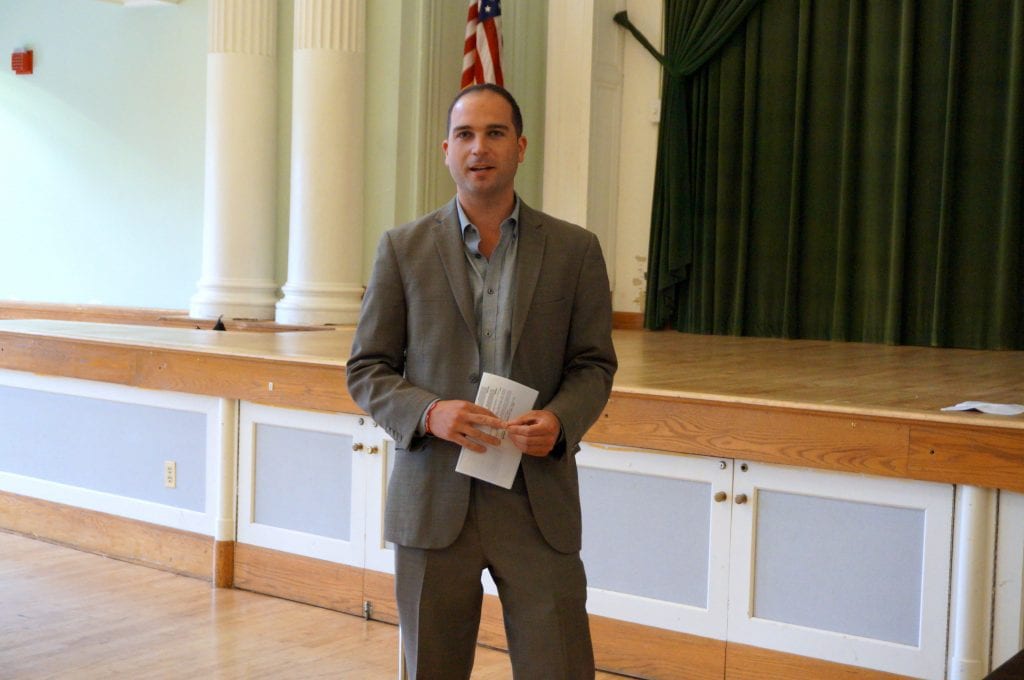 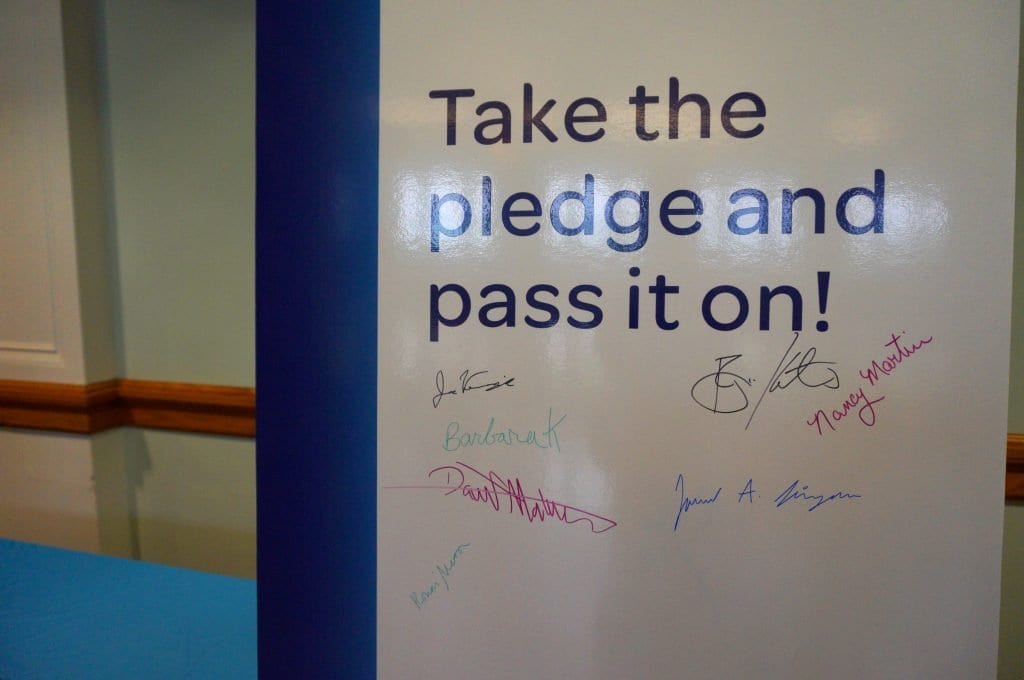 Attendees at a panel discussion on distracted driving were given the opportunity to sign a pledge against driving distracted. Photo credit: Ronni Newton 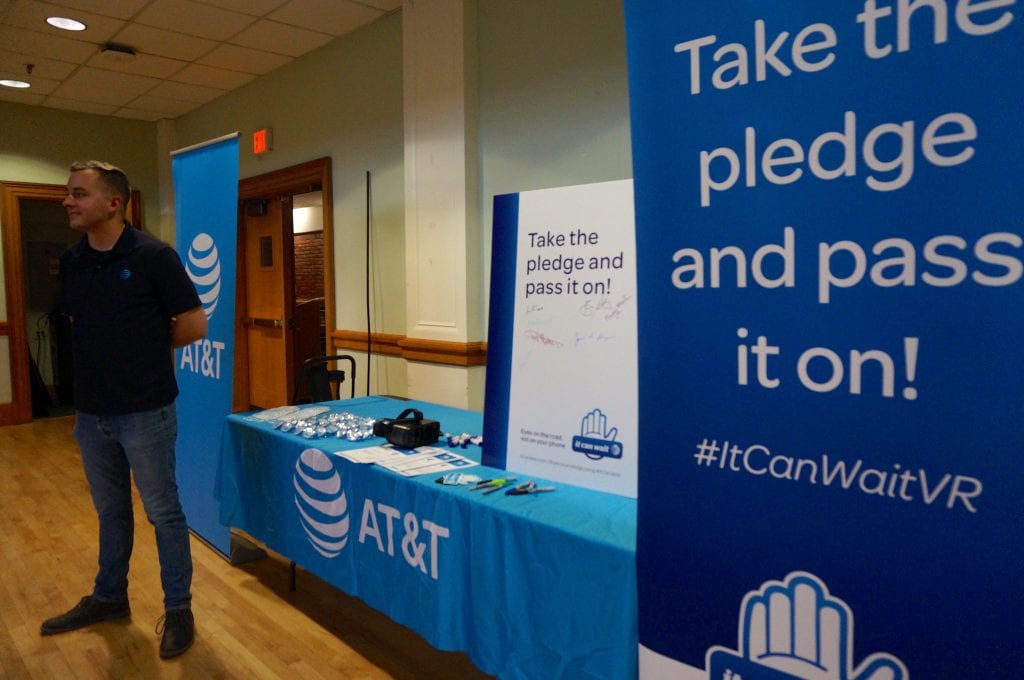 Attendees at a panel discussion on distracted driving were given the opportunity to sign the #itcanwait pledge against driving distracted. Photo credit: Ronni Newton