West Hartford’s new hotel is on track for a June opening, and the owners have shared renderings of what we will see when it’s all done.

It’s been about 18 months since the foundation was poured and steel beams started rising from the ground on Raymond Road– and West Hartford residents and out-of-town visitors alike will soon be able to enjoy the town’s brand new hotel.

“We’re seeing the light at the end of the tunnel,” Dixon Mallory, sales manager with Greenwich Hospitality Group, owner of the Delamar West Hartford, said in a recent interview. “I can comfortably say we will open in June.”

Mallory provided details of the space, including the main floor which will in addition to meeting rooms, a board room, and the ballroom will also include a spa, guest rooms, and Artisan – the same in-house restaurant as the Delamar Southport.

Under the direction of Executive Chef Frederic Kieffer, who will also serve as executive chef in West Hartford, Artisan has received a four-star review from the New York Times. Artisan will also include a tavern and large outdoor garden seating area. The emphasis will be farm-to-table, and diners will frequently observe the sous chef clipping herbs from a garden right outside the restaurant that they will find in their meals just a few minutes later.

Artisan can be reached directly from the hotel’s main floor, but will also have its own entrance on Raymond Road. Approximately 40 parking spaces for the restaurant will be available onsite in the area where the construction trailer is currently located, Mallory said.

The main level of the hotel will also include two retailers. Connecticut Custom Clothing – the new name for Bob DeGemmis’ Dressed to the Nines, currently located on Farmington Avenue –  will relocate to the Delamar. A high quality florist will occupy the hotel’s other retail space, Mallory said.

The back of the hotel overlooks Trout Brook, and that’s where the event lawn will be located. Mallory said that the area will be able to accommodate a cocktail party for up to 450 guests and can be tented.

The event lawn is accessible through the Delamar’s 3,700-foot ballroom, which will seat up to 300 – or 250 if a dance floor is desired.

Regional Director of Sales and Marketing Cristina Kelleher said that the Delamar isn’t booking events until December because they want to get the food and beverage service operating seamlessly first, but that may change.

Kelleher said that the Delamar’s spa will include four treatment rooms. “Our Greenwich and Southport hotels have won many ‘best of’ awards for their spas,” she said. The spa, which will offer innovative treatments and top-of-the-line products, should be an attraction to local residents as well as hotel guests.

Kelleher shared renderings of the interior spaces, and said that most of the Delamar’s 102 guest rooms have Juliet balconies.

Several of the second floor rooms have large balconies that overlook the event lawn, and those rooms can also be rented for events.

Amenities for hotel guests at the Delamar will include twice-daily housekeeping with evening turndown service. That service extends to all guests – even the furry ones!

All Delamar hotels are pet-friendly, and dogs weighing up to 100 pounds are welcome. The hotel will have beds for the dogs, and they will get turndown service, too.

Kelleher said that the Delamar will be providing a shuttle service for guests, particularly catering to guests who need to get to Hartford for meetings.

Images and renderings of the hotel have been provided by Delamar. We-Ha.com will be taking a hard-hat tour this spring, and look for upcoming photographs of that. 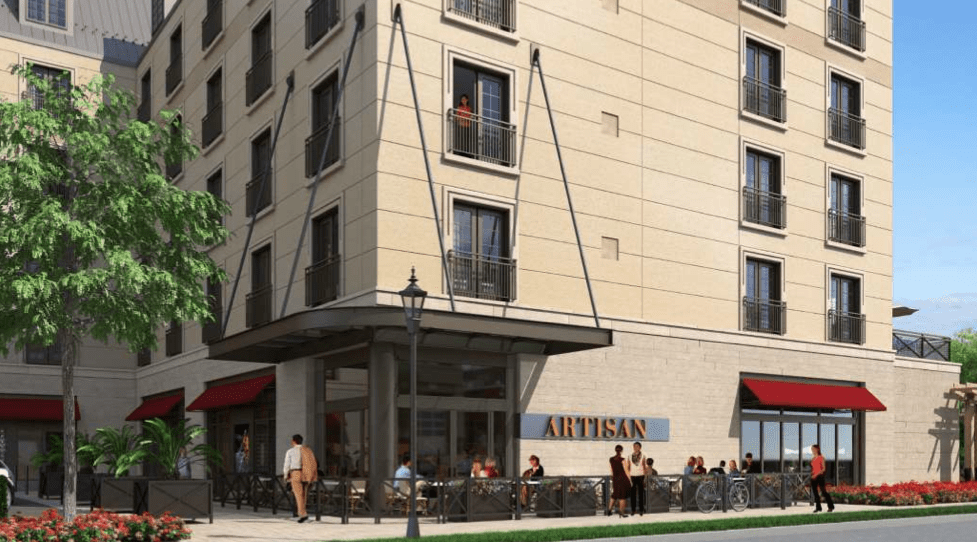 Artisan will have a separate entrance from Raymond Road, and will also be accessible from inside the Delamar West Hartford Hotel. Image courtesy of Delamar 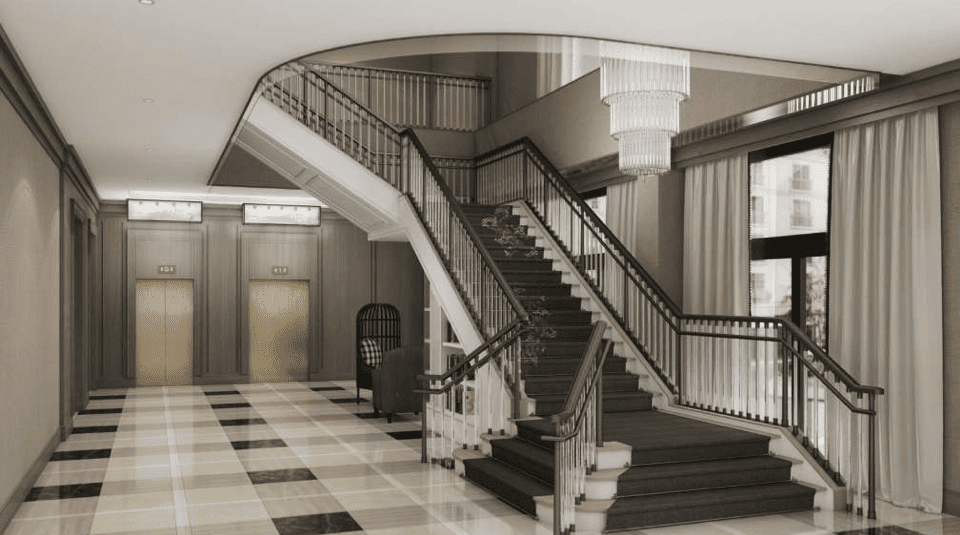 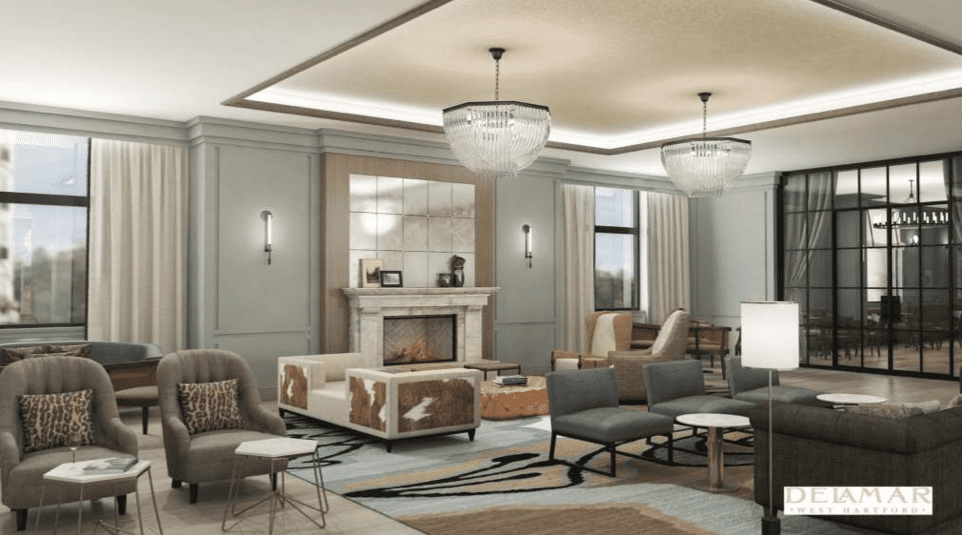 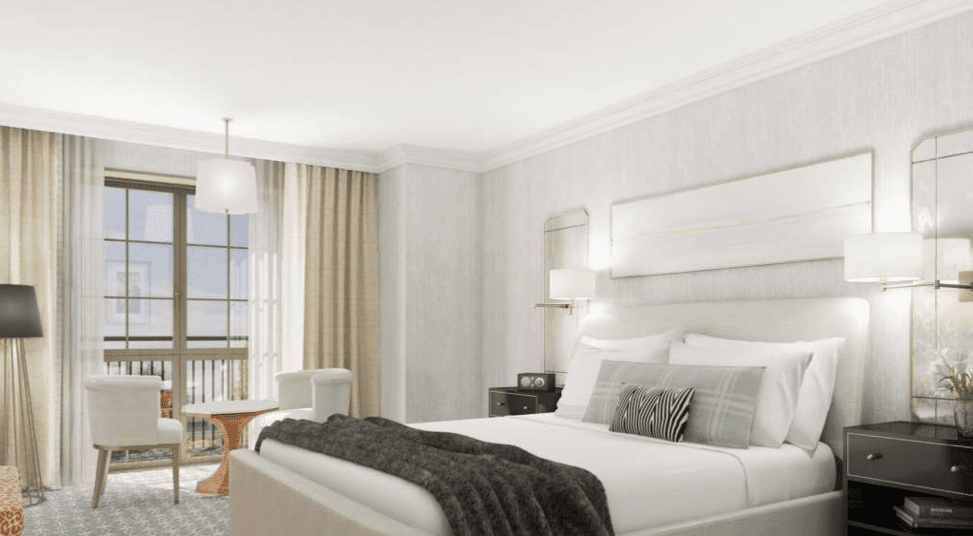 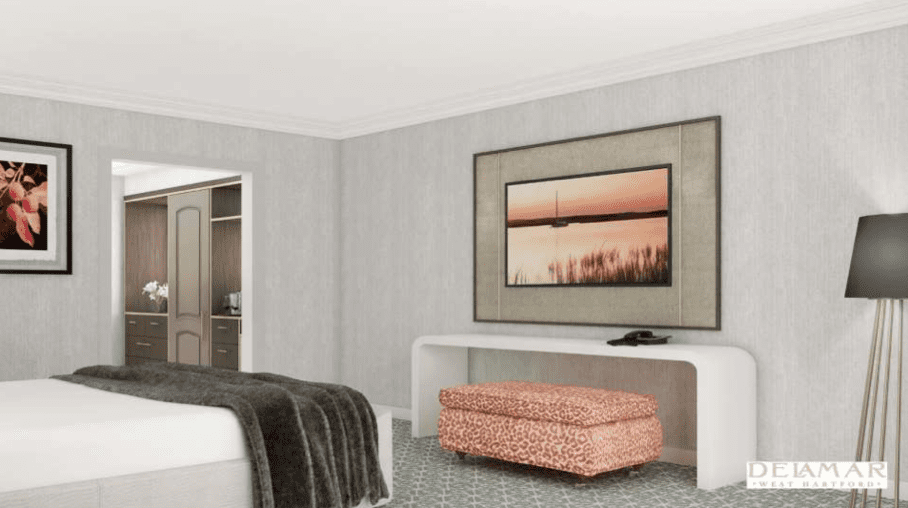 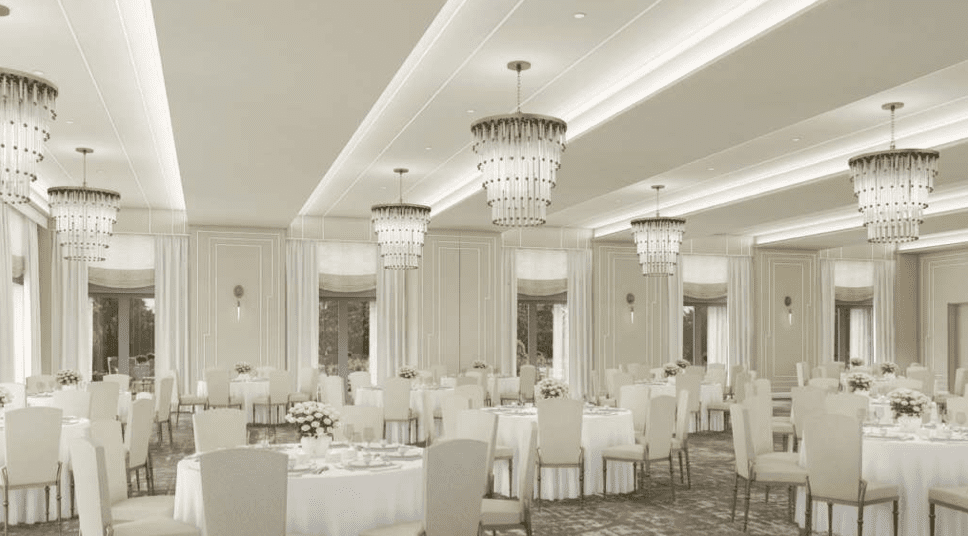 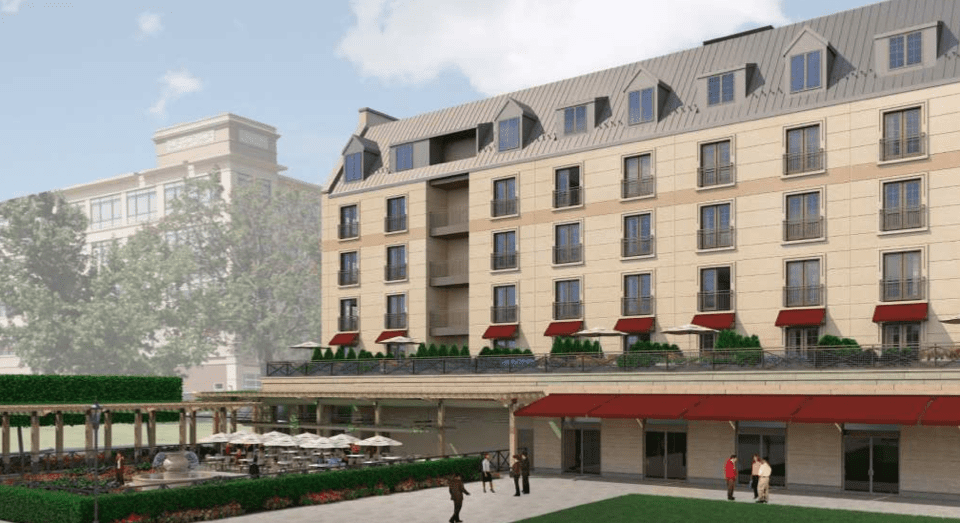