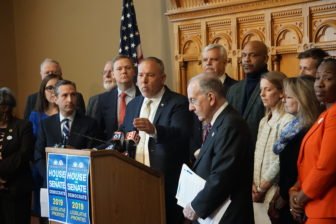 School regionalization was not on the joint agenda developed by House and Senate Democrats on Monday.

“These are important quality of life and vital economic policies for our state,” said Senate President Pro Tem Martin M. Looney, D-New Haven. “The proposals outlined here will build upon the critical policy work we have accomplished in past years and will respond to the priorities of the people of our state.”

“Helping to improve the lives of Connecticut’s working families is a priority for our caucuses,” Aresimowicz added. “This is a time of opportunity for our state and this legislature has a great combination of new faces to go along with the experience necessary to make positive change.”

Workers would be guaranteed up to 12 weeks per year of paid leave to care for an ill family member, and could not be dismissed for taking leave. The benefit would be equal to 100 percent of their pay – up to a maximum of $1,000 per week.

Paid family and medical leave would be financed exclusively through a new payroll deduction on all workers in Connecticut, said Rep. Robyn Porter, D-New Haven, co-chairwoman of the Labor and Public Employees Committee.

Though details still are being negotiated, Porter estimated workers would be charged one-half of 1 percent of their pay to fund the family and medical leave system.

The benefit would not be available to workers for the first year after enactment, Porter added, to allow the state to amass sufficient funds to cover benefits.

Critics have argued paid family and medical leave will prove too inflexible for many businesses, who cannot afford to leave a post vacant for 12 weeks.

The other linchpin of the Democrats’ joint agenda is a gradual increase in the state’s $10.10-per-hour minimum wage up to $15 per hour. It is not clear how long the phase-in period would be.

“Sure, you can survive on less than minimum wage now,” Aresimowicz said. “But you need to take advantage of many of the state programs to do that.”

Gov. Ned Lamont, who campaigned on many of these issues, offered an early endorsement of his fellow Democrats’ agenda.

“These are all policies and ideas the Governor supports,” Lamont spokeswoman Maribel La Luz said. “He looks forward to working together with the legislature on the specifics to make sure they work best for the people and businesses of Connecticut.”

But Republican legislative leaders argued some key elements of the Democrats’ agenda would do just the opposite.

“We did hear about yet another tax,” said Rep. Jason Perillo, R-Shelton, referring to the new payroll deduction all Connecticut workers will face to pay for the family and medical leave benefit. “ … It’s just another burden on middle-class families and people who are working hard every day.”

Perillo and others have questioned whether raising the minimum wage, establishing paid family and medical leave, and other ideas under consideration – such as establishing tolls – would have a cumulative, chilling effect on Connecticut’s business climate.

“We need to be very careful not to pass policies which could obliterate our current economic momentum,” said Senate Minority Leader Len Fasano, R-North Haven. “We are in a fragile situation now. Every economist is predicting a recession is right around the corner. … An onslaught of economic wrecking-ball legislation would put Connecticut into free-fall.”

Absent from the joint agenda were two proposals offered by Senate Democratic leaders to mandate regionalization of small school districts.

One bill, introduced by Looney, would require communities with populations of less than 40,000 to consolidate with another school district.

A second measure, offered by Duff and by Sen. Cathy Osten, D-Sprague, would direct any district with fewer than 2,000 students to merge with at least one more so that the expanded district’s student population exceeds 2,000. If a community did not wish to do so, it would have to explain its hardship in writing to the state Department of Education.

Aresimowicz thanked Looney and his colleagues for sparking debate about this issue and said House Democrats remain open to discussing the topic, even if there is no consensus on it now.

“Just because conversations are difficult to have does not mean we shouldn’t have them,” the speaker said. “I actually appreciate Senator Looney putting forward that bill to make us have those conversations. I’m not saying it’s the absolute right answer. I don’t know that we’ll have the votes tomorrow for that. But we need to start having these discussions.”