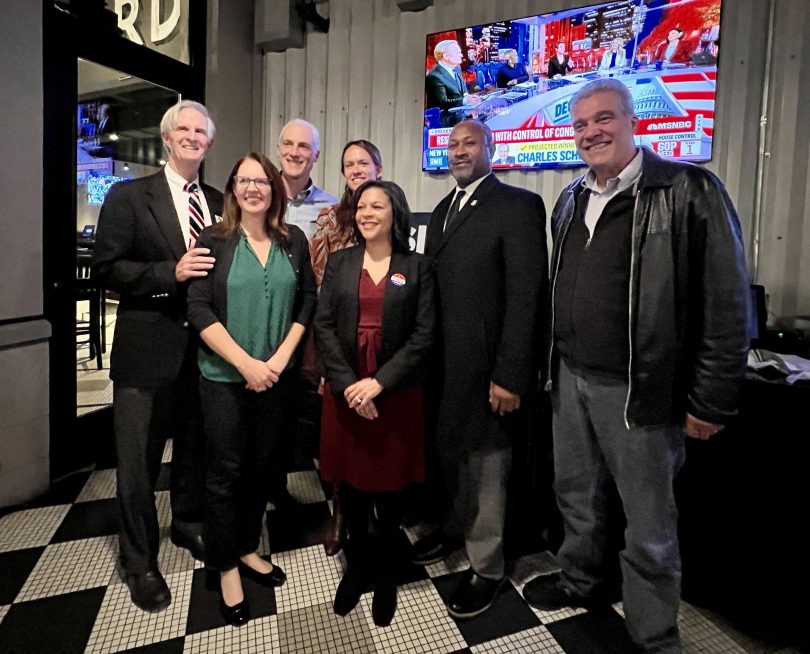 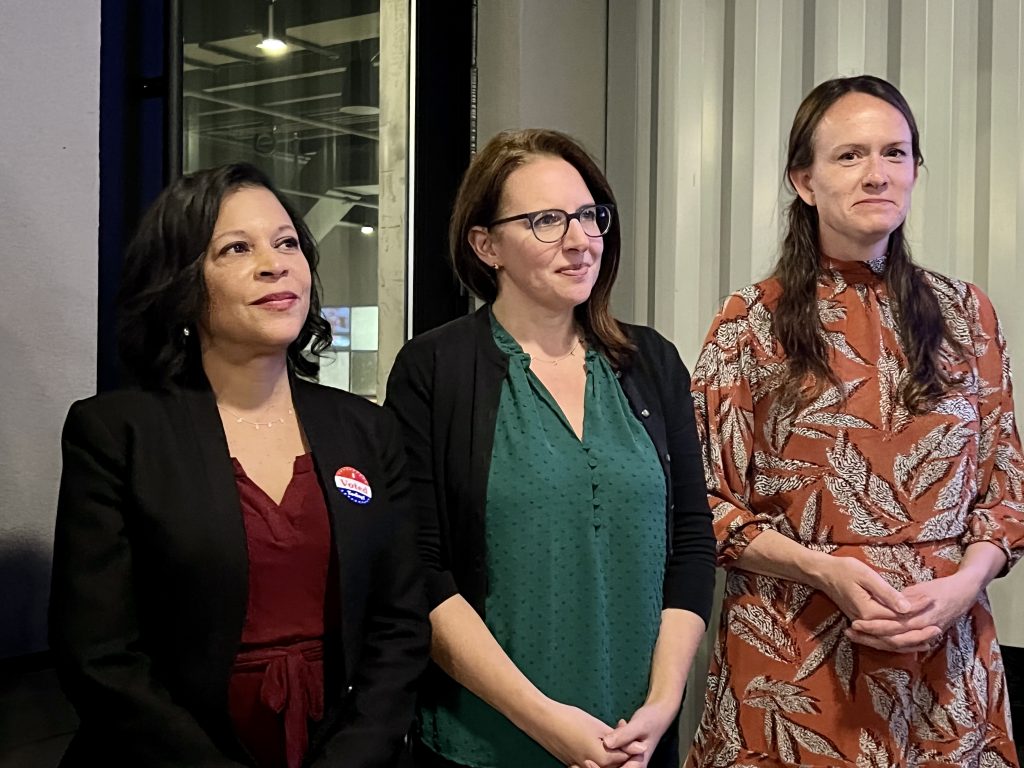 The air was celebratory at Tavern in the Square in West Hartford on Tuesday night where West Hartford Democrats gathered after the polls had closed.

Many of the local races were uncontested, but in the 20th State House District, Democratic incumbent Kate Farrar of West Hartford was challenged by Newington Board of Education member, Republican Anastasia Yopp.

Results posted on the Secretary of the State’s website on Wednesday at 10:15 a.m., while still not official, included a majority of the absentee ballot votes that had been cast. Farrar, whose name was listed on the Working Families Party line as well as for the Democratic Party, received a total of 5,934 votes in West Hartford and Newington (62.41%), while Yopp received 3,574 (37.59%) votes. 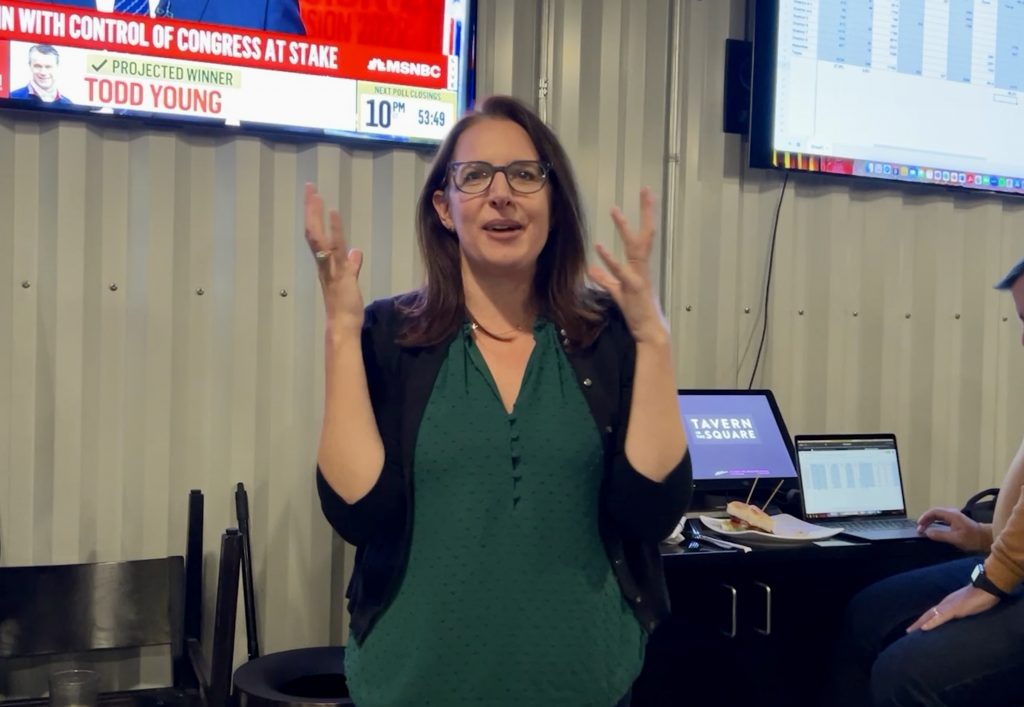 Farrar said after having run for the first time [in 2020] during COVID, this was a different experience getting to meet voters in person, and she thanked all who worked on her behalf. “I’m so so proud to be a Democrat and I can’t wait to see what we’re going to do next for our community,” she said.

“While we had hoped for a different outcome, we are so proud of Anastasia Yopp and the fantastic campaign she ran,” Republican Town Committee Chair Shawn Daly told We-Ha.com in text message late Tuesday night. “Anastasia and her team motivated new Republicans in the State House 20th District with her message of a better economy, safer communities and protecting parent’s rights. The Town of West Hartford had a real opportunity to demonstrate ideological diversity in this town and we’re certainly disappointed they were unable to follow through,” he said.

“Fortunately, this is a marathon and not a sprint. We continue to execute our long term strategic plan focusing on challenging the toxic environment against openness to change in our town. We’ve never expected this cultural change to occur overnight,” Daly said. “We’re on to the municipals. We continue to work for a West Hartford that is more ideologically diverse and in line with successful communities across the country.”

Judge Owen Eagan, who was unopposed, returns for a four-year term as probate judge.

Both registrars of voters who were on the ballot were elected. Newcomer Elizabeth Rousseau will take over for Beth Sweeney – who did not seek re-election – as the Democratic registrar, and and Republican Beth Kyle will return for another term. 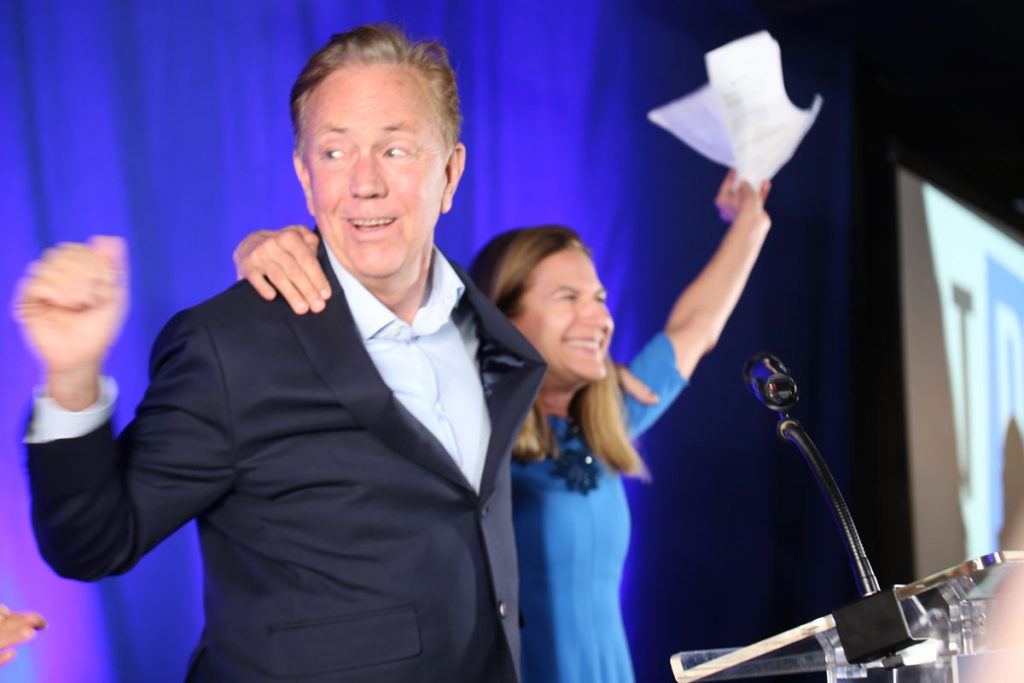 West Hartford resident Dr. Larry Lazor, the Republican challenger to longtime U.S. Rep. John Larson, received 27.9% of the vote in his hometown according to unofficial information, but was awaiting statewide results before offering a comment.

By 10:15 a.m. Wednesday, 98.68% of the state’s precincts had results posted on the Secretary of the State’s website. Lazor, who received 37.19% of the vote according to those unofficial results, provided the following statement:

“I congratulate John and wish him success. We didn’t win but learned a lot-namely that a Republican campaign centered on progress, cooperation and civility can resonate with voters. CT-1 is consistently rated one of the most secure Democratic districts in the US. Even so, it’s clear our vision resonated with our cornerstone issues: fiscal responsibility, fixing our healthcare system, making our communities safer, increasing opportunities to our neighbors who are struggling, protecting a woman’s choice and bringing civility back to Capital Hill. I have a lot of people to thank for their support over these last 18 months. I especially want to thank Felicia and my three children for the sacrifices they’ve made so I could do this.

“While I won’t be serving in Congress, I’m excited to wake up tomorrow and serve our community in the healthcare arena, as a mentor in Hartford and through other projects in the works,” Lazor said.

Republican Mary Fay of West Hartford, running for the open position of state comptroller against Democrat Sean Scanlon, received 30.5% of the vote in West Hartford according to unofficial results that were available Tuesday night. Fay held a slight lead with a small percentage of precincts reporting statewide and also did not comment Tuesday night. As of 12:45 a.m. Wednesday, with 56.32% of precincts reporting, Fay was behind Scanlon 47.39% to 52.61%.

Results posted on the Secretary of the State website at 2:30 p.m. Wednesday indicated that Fay received 45.0% of the vote statewide.

“It’s hard, it’s disappointing. I thought the environment was right for change,” Fay told We-Ha.com in a phone interview Wednesday afternoon. She said she had reached out to Scanlon to concede and offer her congratulations, and while she was unable to reach him she did leave a voicemail.

“I’m very disappointed not just for me, but for the people of Connecticut who saw hope,” she said, for those who are fiscally conservative who were “waiting with baited breath” when the results appeared very close throughout Tuesday evening. The comptroller’s job is not a partisan one, Fay said, and while she said she is highly qualified, as were Republicans running for the other statewide positions, voters stuck to party lines.

Fay received 545,768 votes in the statewide race and said she is proud to have been the highest vote-getter [other than Harry Arora, who received 552,881 in the treasurer’s race] among Republicans.

Fay said it’s hard, and expensive, to run for statewide office, and twice as hard for Republicans. She was grateful for the funding she received through the Citizen’s Election Program.

As for what’s next, Fay said she doesn’t yet know and had really hoped to be the state’s comptroller. “It’s probably Mary 3.0,” she said. “I love public service,” and said her immediately focus would be a West Hartford Town Council meeting Wednesday night.

“I love campaigning, I really do,” she added. “I love meeting people, getting out there, even if we disagree. … I met amazing people who really love this state.”

Final turnout in West Hartford was not available by 1 a.m. Wednesday, but voting was brisk throughout the day. Town Clerk Essie Labrot said Wednesday that 4,090 absentee ballots had been returned town wide. In addition, roughly 300 people utilized Election Day Registration to cast their votes.

Check back with We-Ha.com Wednesday for further updates.